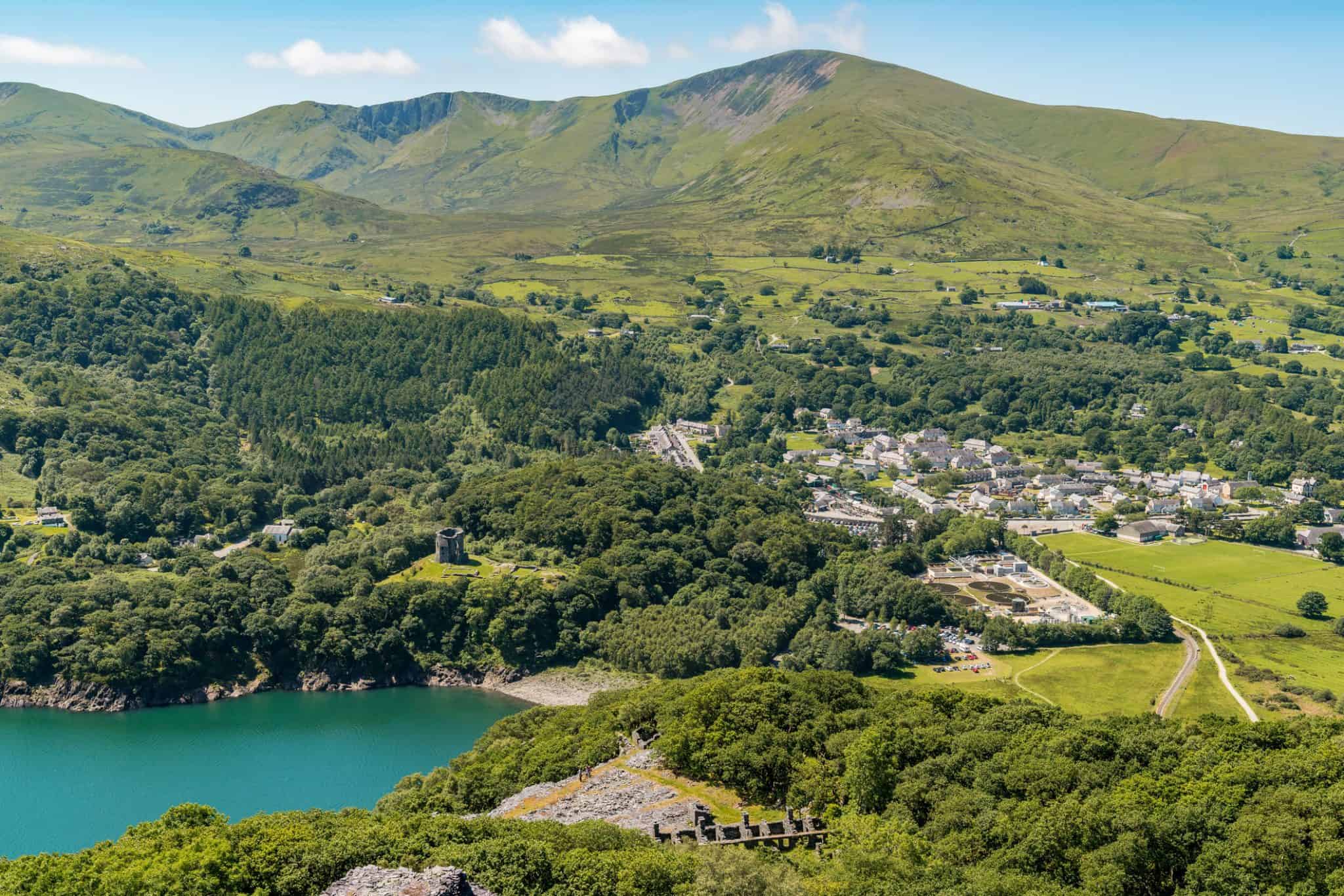 Llanberis is a lakeside village in Gwynedd, northwest Wales, on the southern bank of Llyn Padarn at the foot of the magnificent Snowdon, the highest mountain in Wales. The area has a long history spanning back 1000 years, initially as the location of a strong defensive castle for native Welsh princes, and later an industrial centre for slate mining. Today it is an attractive tourist location and famous centre for outdoor activities, renowned for its beautiful scenery to be explored via hiking, mountain biking, pony riding, or amazing train trips. This article assists your tour of Llanberis by exploring its historical and modern significance.

Llanberis derives its name from Saint Peris, a Welsh saint and cardinal of Rome who lived during the early Christian period around the sixth century. He is believed to have retired to the solitude of this area, residing in a small chapel in a meadow between the site of Dolbardarn Castle and present day Dolbadarn Inn.

Built by the Welsh prince Llewelyn ab Iowerth (“Llywelyn the Great”) during the early 13th century, Dobaldarn Castle stands on a mount above Llyn Padarn lake in Llanberis, strategically deigned as a defence against threats from the direction of the Llanberis Pass, a main route through the north and link to the rest of Wales.

It was one of a series of castles in Snowdonia important not only militarily but also as symbols to reinforce Llywelyn’s power and authority. The main feature is a large round stone keep enclosing a complex series of chambers, 40 feet tall and 40 feet in diameter, guarded by walls 8 thick feet.

The castle remained in use after the death of Llywelyn the Great in 1940 and the power struggles amongst his grandchildren for control of North Wales. Victorious, Llywelyn ap Gruffudd (“Llywelyn the Last”) imprisoned his brother Owain ap Gruffydd on the upper floor of the castle between 1255 and 1277.
During English King Edward I’s conquest of Wales the castle was then used as the last defensive stronghold in Snowdonia, before eventually being seized by the English army in 1282, the year of Llywelyn the Lasts’ death. The castle was abandoned and its building stone and timber beams removed by Edward I to build his own new castle at Caernarfon.Little activity occurred at Dolbardarn until the 18th and 19th century when it became a popular destination for Romantic artists, such as J.M.W. Turner, interested in the Sublime landscapes of the castle and surrounding scenery.

By the early 19th century, as Britain’s industrial revolution began to ramp up, the region around Llanberis became a popular source of slate needed for the enormous demand in roofing for new foundries and factories and the rapid growth of urban housing.

The Dinorwic quarry, located between the villages of Llanberis and Dinorwig, grew at an exponential rate to become the second largest slate quarry in the world. At the industry’s peak in the late 19th century the quarry covered more than 700 acres, producing 100,000 tonnes of slate annually and employing over 3000 men, transporting slate all around the world from Port Dinorwig on the nearby coast connected by railway.

As the quarries grew so did the surrounding villages with Llanberis developing into a bustling village housing workers. However, production dropped in the 20th century due to the declining industry and difficulties of removing hard to access slate and the mines closed in July 1969.

The slate quarries of north-west Wales have since been nominated for UNESCO World Heritage Site statues, with the Dinorwig quarry a major tourist attraction. The National Slate Museum in Llanberis tells of its significance and history.

Today Llanberis, although only a small village consisting of  three or four houses, remains a popular spot for tourists to explore the scenery and partake in numerous outdoor activities such as walking, climbing, mountain trekking, and water sports including scuba diving.

The village is a popular destination for those making their ascent to the summit of Snowdon. The Llanberis Path, despite being the longest route, is a common starting point as it is the most accessible and less strenuous and can even be accomplished on ponies. Snowdon Mountain Railway, a narrow gauge rack and pinion railway, also leaves from Llanberis, travelling 4.7 miles along sweeping vistas to the peak.

Lyn Padarn lake is also a popular site to enjoy outdoor activities and spectacular views. It can be explored by foot or on the Llanberis Lake Railway taking passengers on a beautiful 60-minute return ride along the shores of the lake and through the Country Park, all with stunning views of Snowdon.

Odyssey Traveller offers package tours to Wales for small groups each year for senior and mature travellers as well as to the British isles.