The desert kingdom of Jordan is a place of wonder and majesty. With a history stretching back thousands of years, past civilisations and peoples have left Jordan with an incredible cultural heritage. The ancient city of Petra, located within vivid pink cliffs, is the jewel in Jordan’s crown, an ancient wonder to rival the Pyramids of Giza. But you don’t have to head into the desert to see ancient monuments here. Downtown Amman is home to the Citadel, a collection of Roman, Umayyad and Byzantine structures on a Bronze Age site, and one of the world’s most intact Roman amphitheatres, today used for cultural events. Jordan’s pivotal role in the medieval crusades can be explored at Karak, a 13th century crusader castle.

And Jordan’s natural wonders rival its rich human heritage. Walking in the footsteps of Lawrence of Arabia, it’s easy to see why he fell so in love with the vivid desert colours of Wadi Rum. The Red Sea is home to a rich seascape of coral reefs and shipwrecks, while floating on the Dead Sea – the lowest point on earth – is said to have therapeutic effects for your skin. Whereever you go, you’ll have a travel experience that you’ll never forget. Join Odyssey Traveller as we take you through one of the Middle East’s most fascinating countries. 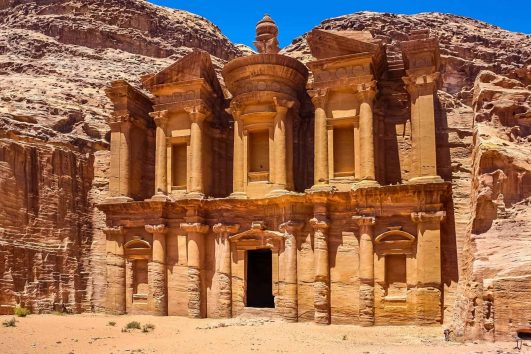 A small group tour of Jordan for senior and mature travellers explores this ancient civilisation with visits to Petra, Wadi Rum, Madaba and other places on this tour which is often paired with Odyssey's  Egypt tour. 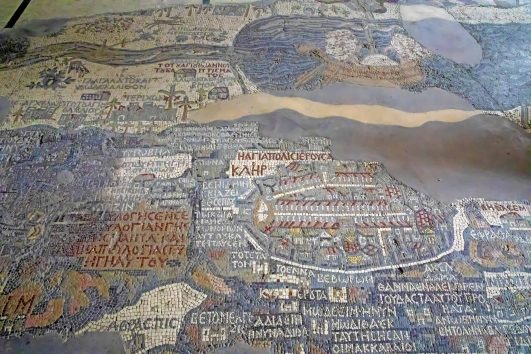 Madaba, Jordan Madaba is a town in west central Jordan situated on a highland plain 760 metres above sea level, 32 kilometres south of Amman. It is famous today in historical cartography for the Madaba… 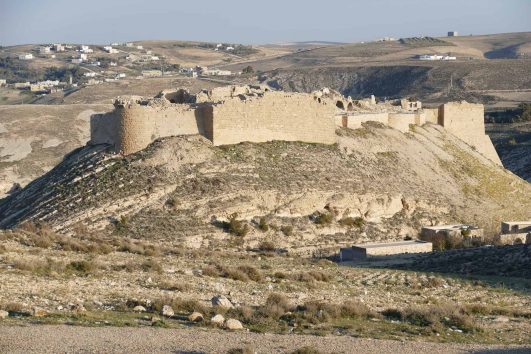 Shobak Castle in Jordan is part of the tour itinerary to visit Jordan for a small group tour for mature and senior travellers with an interest in contemporary and  the ancient history of the Middle East. Join as a couple or solo traveller on this package tour offered each year. 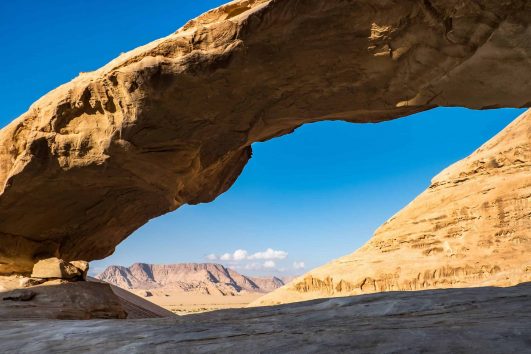 Wadi Rum, Jordan Wadi Rum in southern Jordan is the largest wadi (valley) in the country. About 60 kilometres east of Aqaba, this valley in the Jordanian desert, where famously Lawrence of Arabia was filmed… 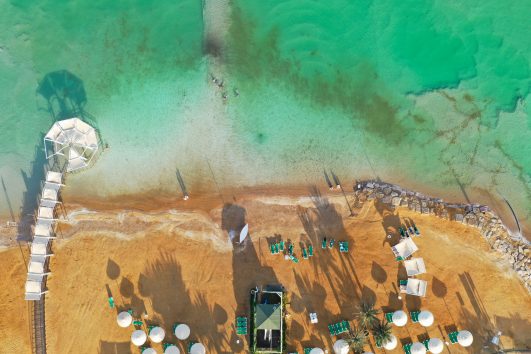 The Dead Sea The Dead Sea is a landlocked salt lake bordered by Jordan to the east and Israel to the west. It is located 430.5 metres (1,412 feet) below sea level in the Jordan… 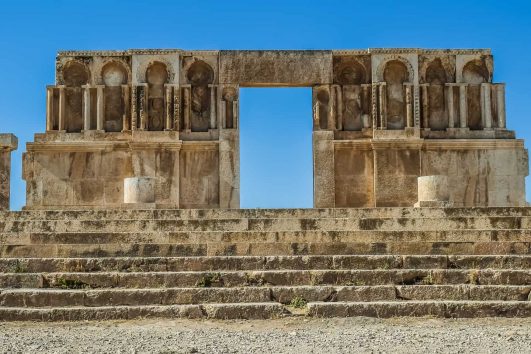 Amman, Jordan Amman is the capital and largest city of Jordan. It is the seat of government and the city where the king resides, and among the most modernised Arab cities. Built on the rolling… 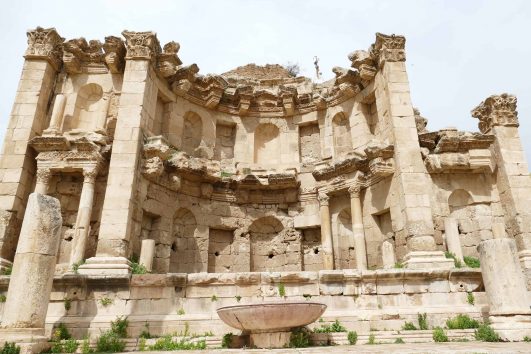 Jerash in northern Jordan is noted for its well-preserved Roman ruins, one of the largest in the world.

Explore and learn about Petra Jordan on an escorted small group package tour to the Middle East for mature and senior travellers.  For couples and single travellers, this tours looks at the Romans, the silk road and the Egyptians in ancient history and the trade that passed through the region. 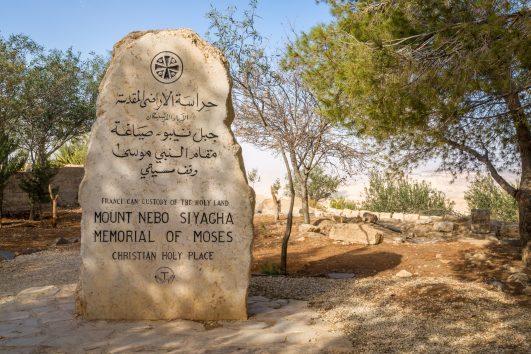 Mount Nebo is a revered holy site. According to the Hebrew Scriptures, Moses, who led the Israelites in an exodus out of Egypt across the desert for 40 years.

Odyssey travels by coach and occasionally uses local transport, including trains and ferries. Specifics are always outlined in your tour itinerary. Buses are the most common way of getting around Jordan, and are inexpensive, though Jordanian buses tend not to run by set timetables. Taxis are common in the capital Amman, and operate outside Amman, though bear in mind taxi meters are displayed in fils, rather than dinars, so keep this in mind to avoid overpaying. Passenger train services do not operate in Jordan, so unfortunately taking the train is not an option.

Jordan covers an area of 91,880 square kilometres and is almost entirely landlocked apart from 26 kilometres of shoreline along the Gulf of Aqaba. Jordan is generally a flat desert plateau, with more than four-fifths of the country’s territory comprised of desert. In the west of the country, the Great Rift Valley seperates the East and the West Banks of the Jordan River. The Rift Valley contains numerous geological depressions, with the area around Dead Sea dropping to about 1,410 feet below sea level, the lowest natural point on Earth’s surface.

Jordan has a Mediterranean style climate, with hot, dry summers, and cool, variable winters. Rainfall happens almost entirely during the winter months, so depending on when you intend to travel, check the weather reports and dress accordingly.

Jordan has 5 UNESCO World Heritage Sites. You can view the official list of the sites here (https://whc.unesco.org/en/statesparties/jo). The listed sites include:

Jordan has numerous festivals and events throughout the year to celebrate its traditions and culture. The Jerash Festival is one of largest festivals in Jordan – held every July in the city of Jerash, the festival brings thousands of participants and visitors to its shows and performances, including performances of music, dance, and literature, with workshops and seminars also held for attendees. The culture of Jordan’s native Bedouin people is celebrated in the Aqaba Traditional Arts Festival in February, with the handicrafts and wares of Bedouin craftsmen put on display and sold on the streets of Aqaba. Muharram is a time of great celebration in Jordan as it marks the start of the Islamic New Year, and the occasion is marked with feasting and dancing.

Petra: The True and Surprising History of the Lost City of Stone, by Patrick Auerbach
The making of Jordan, by Joab B. Eilon
Lion of Jordan: The Life of King Hussein in War and Peace, by Avi Shlaim
A Pilgrim’s Guide to The Holy Land: Israel and Jordan (Pilgrim’s Guides), by Raymond Goodburn

Food in Jordan bears many influences from the cuisines of the wider Levant, as well as some influences from Turkey and the former Ottoman empire. The national dish of Jordan is Mansaf, lamb cooked with ferrmented dried yogurt powder and served with rice. Mezze dishes are a mainstay of of Jordanian cuisine – a selection of small dishes often served at the beginning of multi-course meals, mezze include a variety of different dishes including fattoush (a salad of garden vegetables and pieces of pita bread), tabbouleh (a dish made of bulgur, tomatoes, parsely, mint and onions) and hummus (chickpea puree with tahini, olive oil, lemon juice and salt).

Tea and coffee are central to any social occasion in Jordan, with coffeehouses functioning as social hubs in Jordan’s towns and cities. Although Jordan is a Muslim-majority country, alcohol is not a social taboo, with arak (an aniseed-flavoured alcoholic beverage) often served with meals. Many different varieties of delicious fruit juices are produced and consumed throughout the year to deal with Jordan’s often scorching heat, including pomengranate juice, apricot juice, and lime-mint juice.

As of writing, smartraveller.gov.au advises travellers to exercise a high degree of caution when travelling to Jordan. There is a possibility of protests in Jordan due to domestic and regional developments, so avoid demonstrations and large gatherings as the situation may become unpredictable. Border areas around Syria and Iraq may be unsafe due to ongoing conflicts in those countries, so it is recommended that you avoid travelling to these particular areas.

Whenever you travel overseas, it’s always wise to take an appropriate travel adaptor. Jordan’s electricity supply runs at 230V and 50Hz. Jordan uses a multitude of electric plug types, including Types C, D, F and J plugs, so make sure you have the right travel adaptor with you. 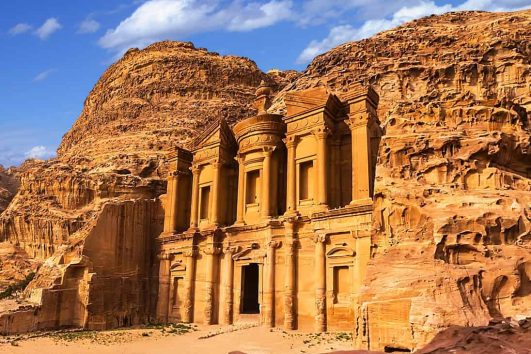 Petra, the legendary ancient city cut out of the surrounding mountainside. 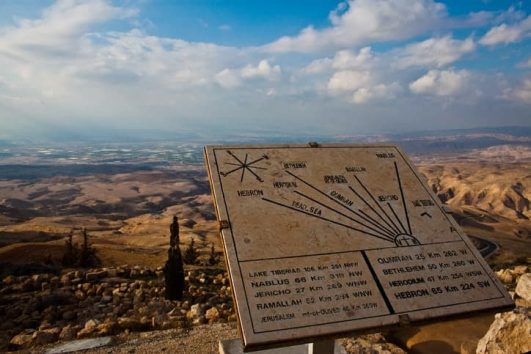 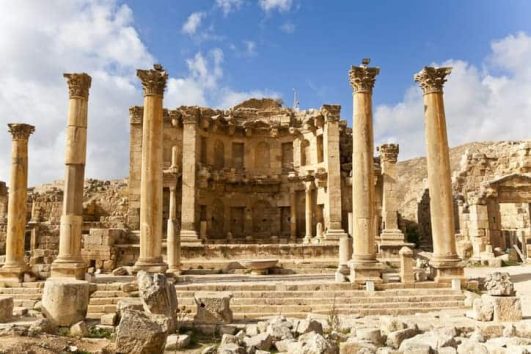 What time zone is Jordan in?

Is tipping customary in Jordan?

If you’re on an Odyssey tour, we take care of tipping so you don’t need to give it a second thought. However, in your free time, or if travelling independently, it’s essential that you tip an appropriate amount for services. Tipping is important in Jordanian culture, especially in restaurants and hotels where staff wages tend to be lower. A tip of around 10% is standard in Jordan.

Wifi should be freely available in most hotels, cafes and restaurants.

Can I use my mobile/cell phone while in Jordan?

Check with your cell phone provider to see whether you’re able to make calls and use data while in Jordan. Many providers will allow you to pay a daily fee that allows you to make calls and check the internet while only being charged your regular rates. However, be certain to inform your provider that you’re heading overseas, because just like a bank they can turn off your service as a result of unusual activity.

What are the most famous places to visit in Jordan?

Not to be missed is the the ruined city of Jerash, the largest and most interesting Roman site in Jordan.

Stay in one of the Bedouin camps scattered across thedesert wilderness ofWadi Rum, with its burnished sandstone cliffs and vivid-coloured dunes.

When is the best time to visit Jordan?

The best time to visit Jordan is during the spring (March – May) and autumn (September to November) months. At these times of the year the temperatures are cool enough to enjoy exploring Jordan’s iconic sites.

Why is Petra called the "lost city"?

Petra was an important city in antiquity but after the 14th century AD, Petra was completely lost to the western world. It was rediscovered in 1812 by the Swiss traveler, Johann Ludwig Burckhardt, who tricked his way into the fiercely guarded site by pretending to be an Arab from India wishing to make a sacrifice at the tomb of the Prophet Aaron.

What should female tourists wear in Jordan?

Stay away from v-neck tees that will show your cleavage, shirts that expose your back or showing too much leg. Some women will be wearing a black niqab, a face-veil that leaves only their eyes uncovered, while others will choose to only conceal their hair and a few will have their hair freely visible. If you choose to leave your hair free, make sure to thoroughly dry your hair before leaving your hotel, as wet hair is seen as sexual.

Jordan is spectacular, safe, and friendly – so where are the tourists?

How to be a responsible traveller in Petra.

The Dead Sea: Why you should visit before it’s too late.