Much has changed since we last wrote about shinrin-yoku or forest bathing in 2017 (you can read the original article after this introduction) as the movement has gained considerable momentum in the West, particularly in the United Kingdom. In June 2019, Harriet Sherwood reports on The Guardian that conservation charity The Woodland Trust suggested that forest bathing should be part of a range of non-medical therapies prescribed by doctors.

Read on to take a look at our original article on this movement, back in 2017.

Forest bathing in Japan is an unusual concept to the Western mind.

Forests are a fundamental part of the Japanese national character. They are often treated with spiritual reverence, and shrines and places of worship are frequently constructed in their depths. The holiness of forests is typified by what is referred to as shinrin-yoku, or ‘forest bathing’. This is an increasingly popular practice in which the forest is considered to have healing properties that can be found by spending thoughtful time amongst the trees.

It may seem obvious that spending time in a forest is relaxing and good for the soul, but perhaps less obvious that such an activity could have observable health benefits. A 2010 study conducted in 24 forests across Japan showed that subjects who participated in a forest walk had lower blood pressure, heart rate, and cortisol levels (cortisol is one of the major stress hormones) compared to those who walked through a city. In addition to reducing stress and lowering the heart rate, studies have shown that ‘forest bathing‘ boosts immune systems and can assist those recovering from an illness or surgery.

What is forest bathing? 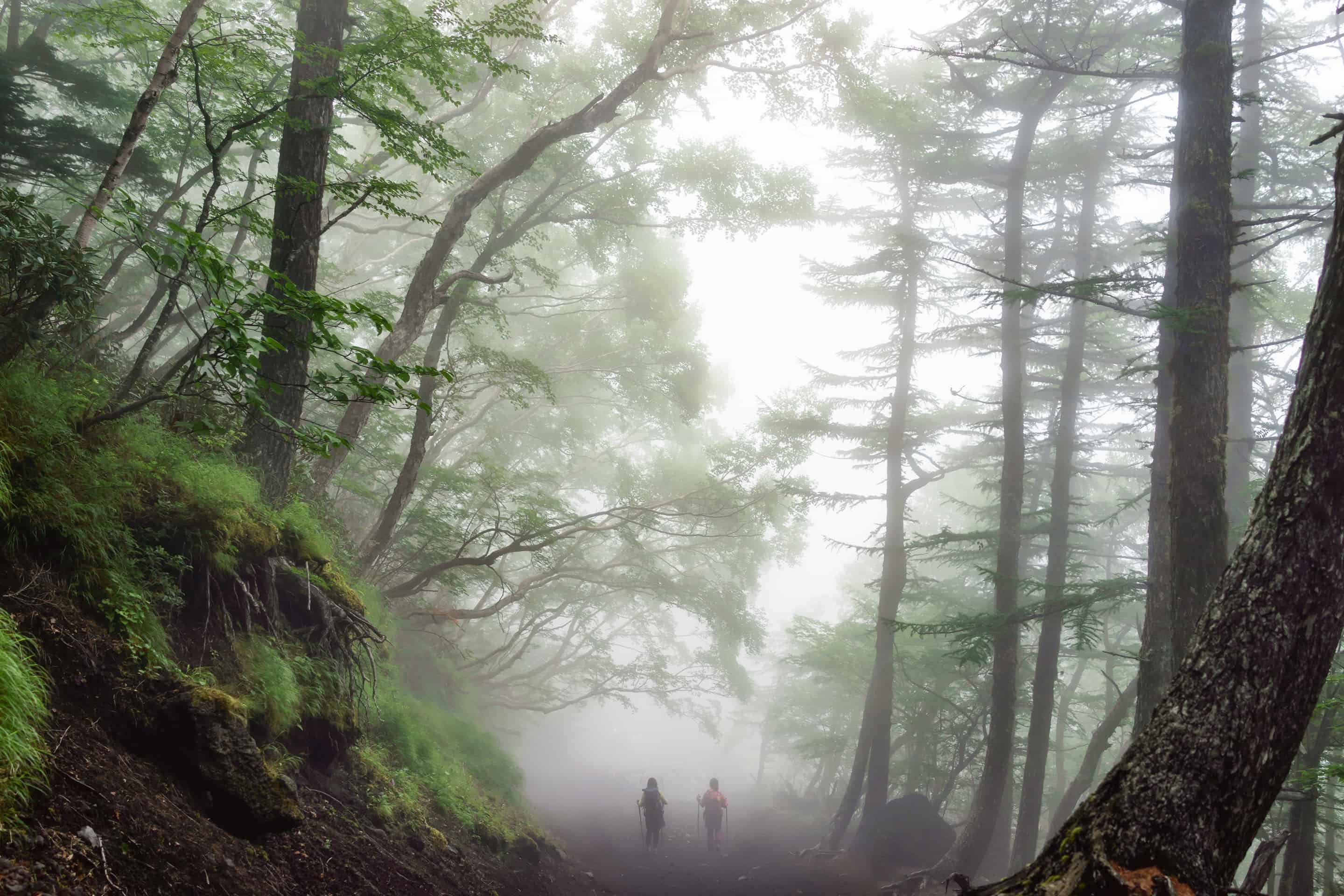 So what exactly is forest bathing? Forest bathing differs from hiking in that it’s not about reaching a destination, nor is it about educating oneself about the details of the forest. It is simply about existing in the forest, breathing slowly, and allowing yourself to be calm and deliberate. It incorporates mindfulness and meditation techniques, in that it requires the participant to pay attention to existing in the moment, while focusing on their breathing and their surrounds, and avoiding distraction.

Often, forest bathing in Japan takes place as a guided group activity. The precise details can change depending on the guide and location. Usually, the walk ends with a tea ceremony, and they often include moments dedicated to pausing and attending to elements of the forest that might otherwise pass you by. This article in The Atlantic describes a forest bathing walk in San Francisco, during which the author discovers a new way to disconnect from this constantly connected world, and take time to breathe.

The History of Forest Bathing 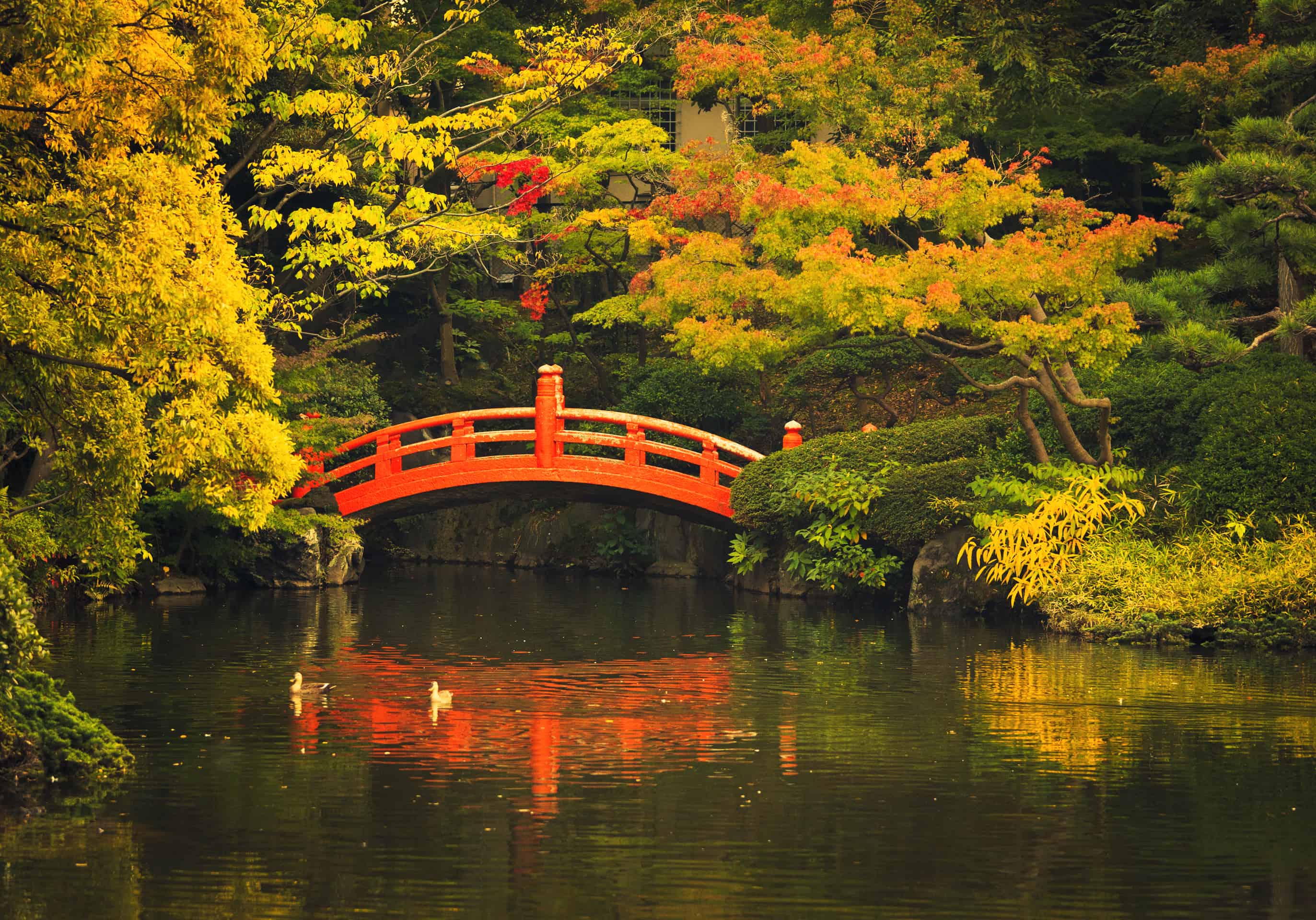 The term shinrin-yoku, roughly translated as ‘taking in the forest atmosphere’ was first used by the Japanese Ministry of Agriculture, Forestry, and Fisheries in 1982. This was part of a national effort to promote the therapeutic value of spending time with nature. It was popularised as a response to Japan’s significant problem of overwork. It has become such a problem that the nation even has a term for death by overwork: karoshi. While the culture of office work and long hours can be overwhelming, a stunningly beautiful natural environment is often relatively easily accessible. While it has taken a long time to make its way beyond Japan and South Korea, it is becoming increasingly popular in the west.

Recently, The Washington Post reported that Forest bathing is following a similar path to that of Yoga 30 years ago, as it becomes increasingly accepted as a legitimate form of medical treatment and method of taking care of your health. It’s also been picked up in Australia in, as reported by the ABC. Australia has three accredited forest bathing guides, who conduct the practice in tranquil national parks, among the sights and sounds of the bush. It’s also, according to The Telegraph, making its way to Britain.

Today, Japan has a non-profit organisation dedicated to forest bathing, and 62 locations certified as ‘forest therapy’ sites. However, one needn’t be in a certified site in order to experience the benefits of forest bathing. You simply need to be surrounded by nature. This is especially easy in Japan, where 67 per cent of the country is forested, and much of this is relatively free of tourist traffic. For more information on the rise of forest bathing, this article in the Independent is an excellent resource!

The Beautiful Forests of Japan

Among the reasons forest bathing has been popularised in Japan is that the nation has many picturesque and beautiful forests. If you’re curious about travelling to Japan to discover these forests, whether you want to go for a hike or just a short visit, here are some of the spots that are worth visiting!

This national park is gorgeously forested, with a beautiful lake and live volcanoes (!). It covers a significant amount of geography, over 85,000 hectares, but if you do some research, you’ll discover that there are plenty of spots worth exploring. If you’re lucky, you’ll also glimpse some native wildlife. Perhaps you’ll see a Japanese Serow or spot the extremely cute Japanese Flying Squirrel.

The Sagano Bamboo Forest is visually striking, tranquil, and only 30 minutes from Kyoto. Visitors often notice the sound made by the densely packed bamboo trees as the wind passes through them, causing them to sway and rustle and creak. Because of its beauty and ease of access, it tends to be quite popular, so if you’re able to visit outside peak times, the reward is well worth it. Also, the famous Tenryū-ji temple is only a short walk from the forest, and well worth a visit while you’re there.

Yakushima is an island that is home to some of Japan’s oldest living trees, especially ancient cedars. Yakusugi Land is a nature park containing a number of cedars that are more than 1000 years old! In this park, you’ll find a number of trails of various difficulties, which allow you to move among these ancient trees. Also on Yakushima is the Shiratani Unsuikyo Ravine (pictured above), was the inspiration for the beloved film Princess Mononoke. There is a trail that leads through this park, which takes approximately 12 hours to traverse, and includes many glorious sights and sounds. Japan’s third largest island, it was designated a UNESCO world heritage site in 1993, and is 17 miles wide, meaning you can traverse and see much of the island in a single day.

Travelling to Japan with Odyssey 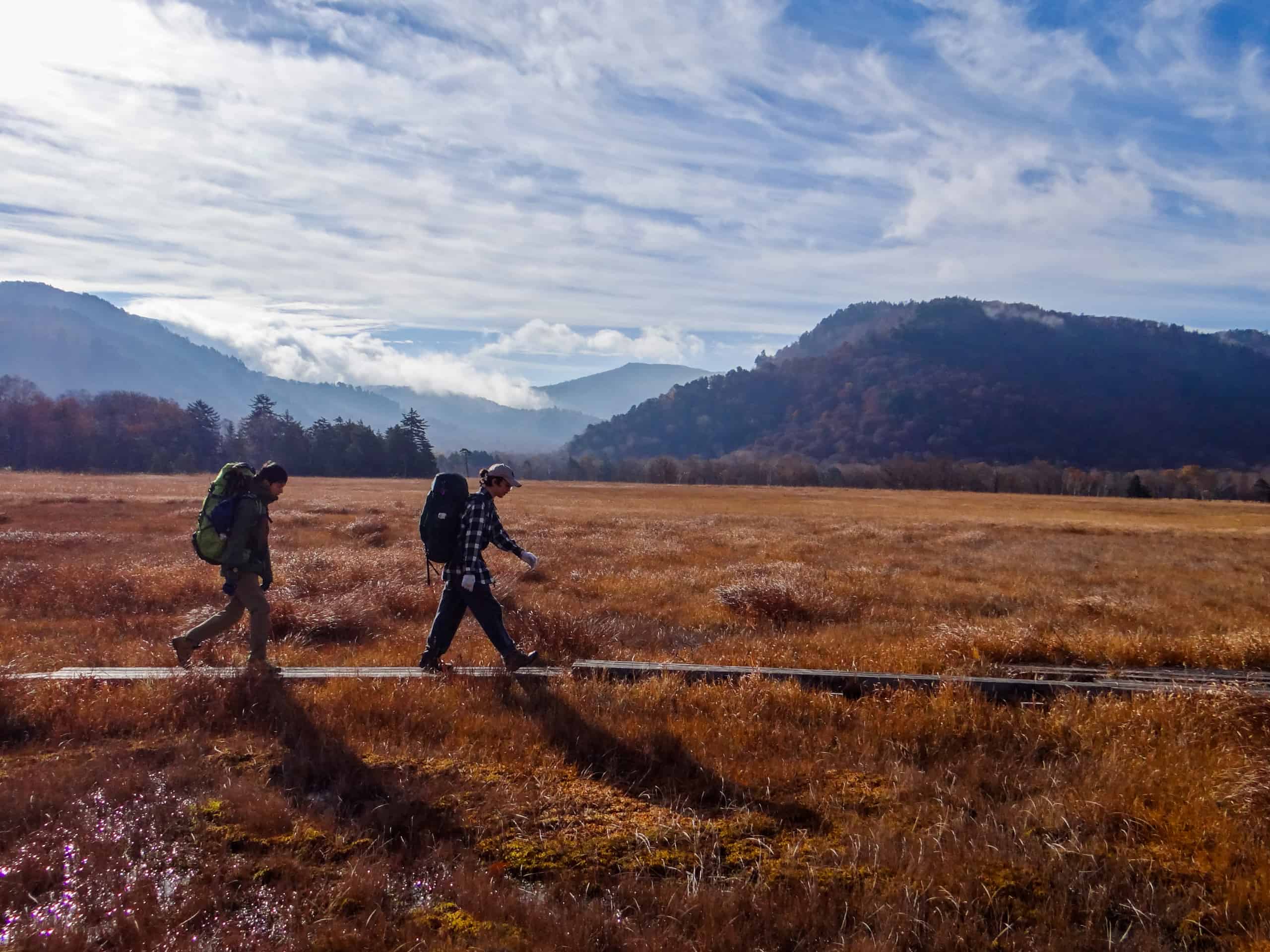 If this article has inspired you to travel to Japan, take a look at Odyssey’s various tours of the country by clicking here.

If you’re looking for a journey that requires less walking and more sitting, why not check out our Japan History by Rail tour.

Japanese photographer Yoshinori Mizutani recently captured a series of images for the New Yorker that evoke Forest Bathing in Japan. 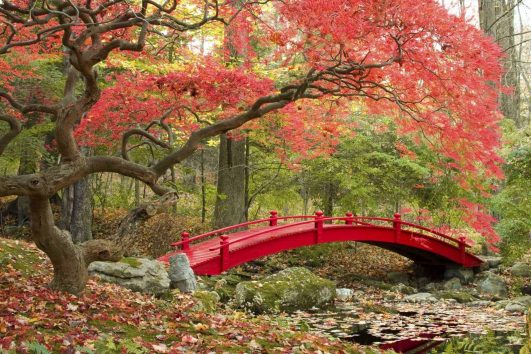 Escorted small group tour, Walking Japan, for mature and senior couples and solo travellers, a walking program traces the journey of 17th century Japanese poet and haiku master, Matsuo Basho. We walk in his footsteps on this 13-day journey around the northeast Tohoku region of Japan. 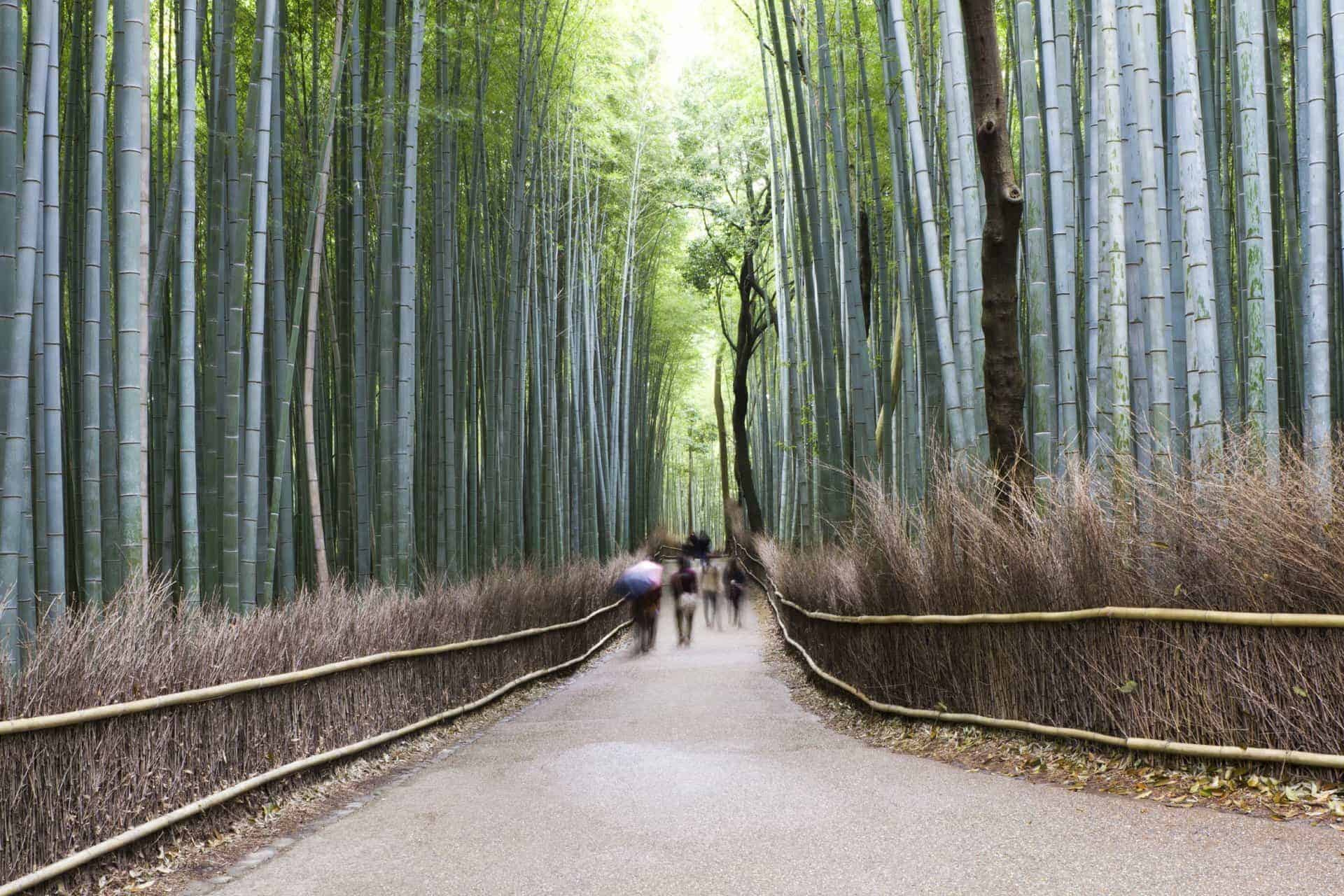