The cherry blossoms of Japan are known to admirers the world over. But their brief, beautiful season is not just a draw for international travellers. Japanese people celebrate this time with festivals, rituals and family gatherings. If you are lucky enough to be in Japan during the elusive blooming season, join the locals for hanami, or ‘flower viewing’. Read on for insights into the significance of the cherry blossom in Japanese culture. This guide may help you in planning your own tour of Japan.

Sakura is the Japanese word for cherry blossom. The blooming season is eagerly anticipated in Japan every year. It usually begins in the island of Okinawa during January or February. It passes through the centre of Japan in March and April. A rather late, May bloom completes the season around Hokkaido in the north. The blossom also blooms later in higher altitudes, so can be followed through the various regions and terrains of Japan. For its major cities, the first blossoms in Tokyo usually appear in the final days of March, hanging on until around the 5th of April. Kyoto follows a day later. Annual predictions are monitored closely – the season varies slightly year to year. A “sakura forecast” can be found here, and may help you in planning your tour of Japan. 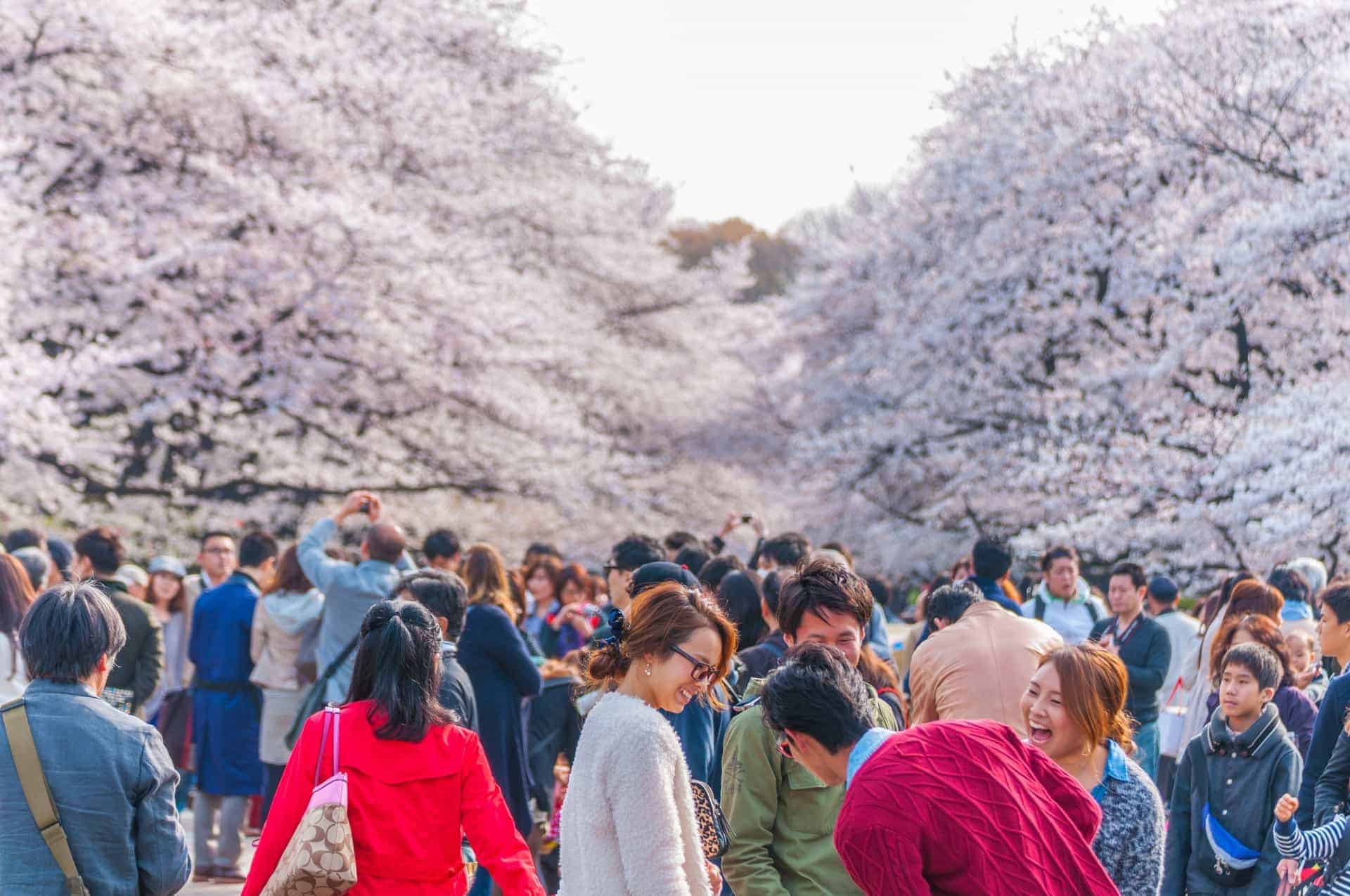 Hanami means ‘flower viewing’. Parks and gardens fill with picnickers, sharing food and drink. Ueno Park, which has been the subject of many ukiyo-e prints and short stories due to its beauty, is a popular public space for cherry blossom viewing.

Public places transform during sakura season. Celebrations take place both day and night. It’s said this is the time of year that Japanese people are most relaxed. The window of blooming is brief: usually two weeks, or less if rain is on the cards. Parties take place all over Japan. People wait in parks all day, saving their coveted spot for their evening picnic. Dusk is a particularly beautiful time to appreciate the blossoms. Typically, lanterns are hung in the trees, so that the whole canopy glows pink. Restaurants are full of peaceful revellers. You may even spot a geisha making her way through the trees.

The history of hanami

Hanami is thought to be one of Japan’s most time-honoured rituals. Its origins trace back to the Nara Period (710-794). In ancient Japan, the sakura bloomed at the beginning of rice-planting season. It was used to divine the year’s harvest. But it was also celebrated as a metaphor for life. Many poems of the period attest to its fleeting beauty. The Japanese believed the trees contained spirits, and made offerings of rice wine. This is how the hanami tradition is said to have developed: beginning with Emperor Saga before trickling through the samurai classes, and finally to be enjoyed by all members of society. 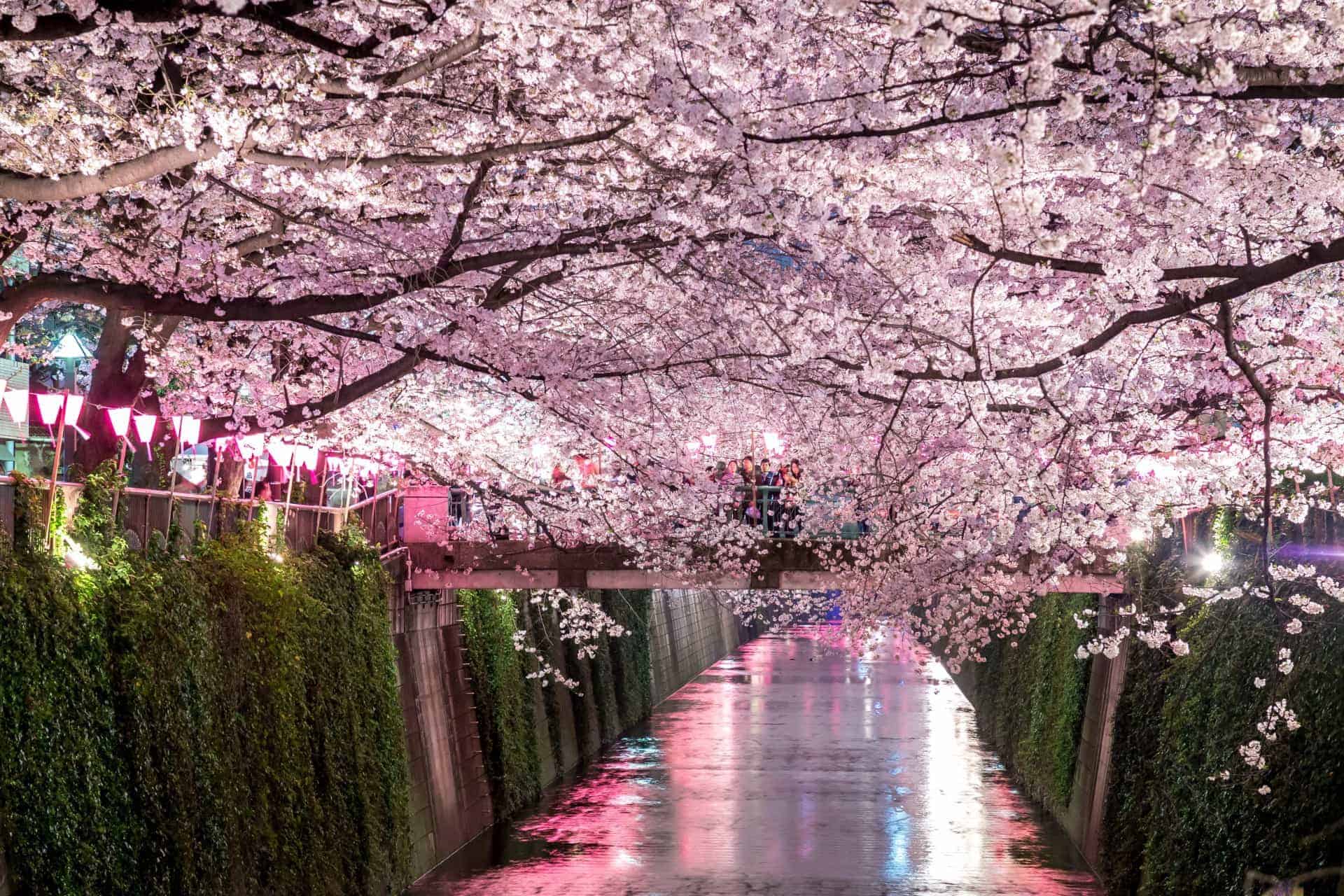 If you are in Japan for sakura season, you may notice a proliferation of pink treats. Limited edition sakura-flavoured products become available in supermarkets. Products include sakura drinks, dumplings, KitKats, beer (!) and even a Starbucks latte. Sakura is said to be an acquired taste, often compared to a cross between soap, and lavender.

It is said that one must be brave or stupid to travel to Yoshino during cherry blossom season. For hundreds of years, this has been Japan’s most famous viewing spots for the 30,000 cherry trees during hanami.

Tokyo is known for its high-tech, high density living. The name conjures neon lights and crowded streets. But many are surprised to discover the city’s green spaces. Parks provide a place to escape the city’s hustle and bustle. Imperial Palace Gardens is one such location. The palace is the primary residence of the Emperor of Japan. It’s an atmospheric and iconic spot to appreciate the fleeting beauty of the sakura season.

Where better to appreciate Japan’s national icon — the cherry blossom — than from the equally iconic Mt Fuji? The mountain is surrounded by cherry trees. Subsequently, there are many vantage points from which to appreciate them. Two of the best are the Fuji Five Lakes region, and Hakone. 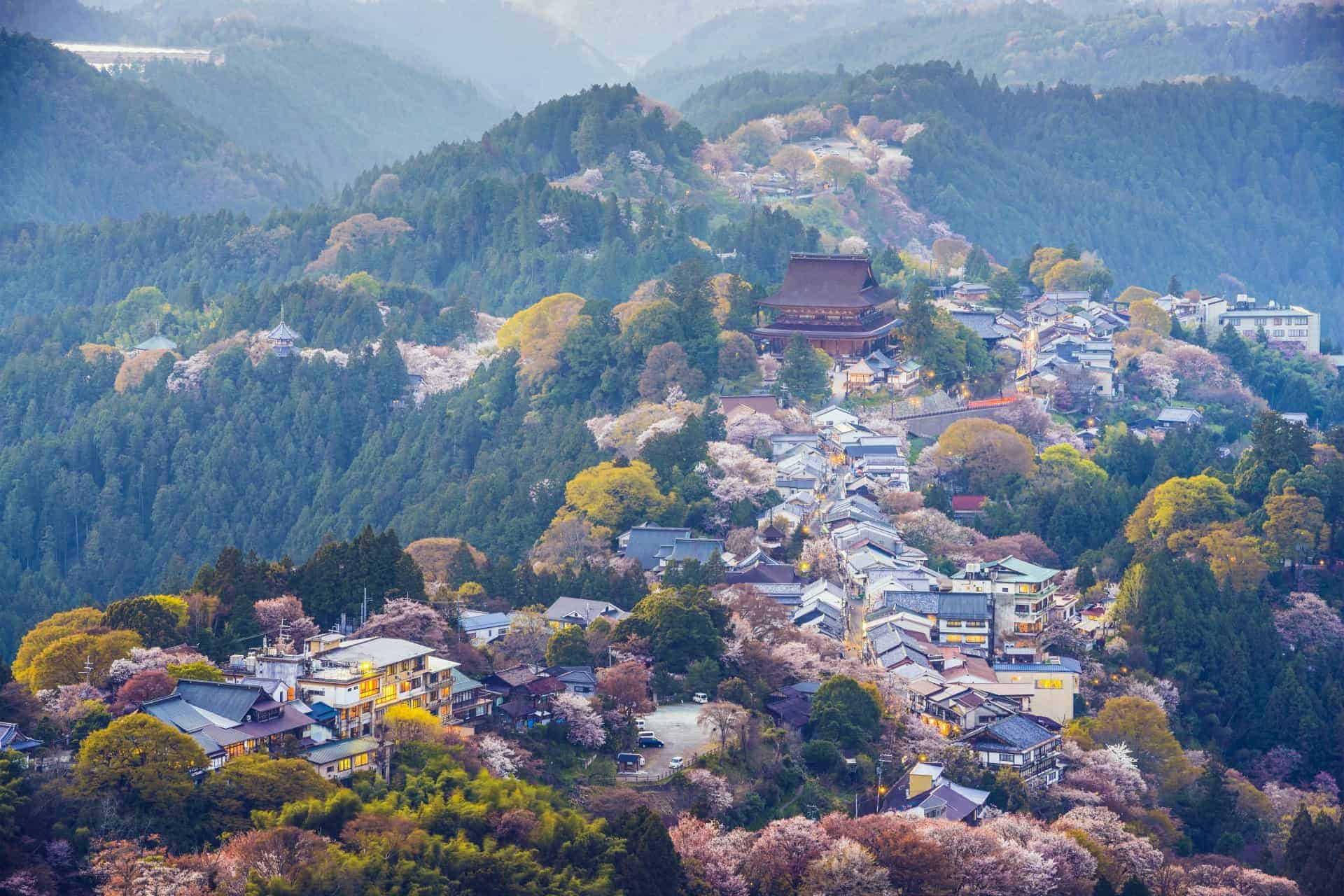 The term hanami came to refer to the cherry blossom exclusively during the Heian Period (794-1185). Before then, hanami parties were held for the wisteria and plum blossom seasons too. These remain beautiful events, and travellers who miss the cherry blossoms might consider viewing these blooms instead. Wisteria is coloured a deep purple. Its flowers hang in bunches, draping towards the ground. Kawachi Fujien Gardens in Kitakyushu is home to the famous “wisteria tunnel”. The five-petalled plum blossom ranges in colour from white to deep pink. The plum (or ume) blossom also boasts a strong, sweet scent. Plum festivals (or ume matsuri) are also celebrated in Japan with aplomb.

Odyssey Traveller offers a number of tours to Japan, with departures throughout the year. Click here for a list of scheduled tours. Our Specialist Escorted Small Group cultural Tours exploring Japan has a departure in late March, to coincide with the anticipated blooming of the cherry blossoms. This 12 day tour begins in Kyoto, and crosses to Hiroshima and coastal Matsue. We travel toward iconic Mt Fuji at Hakone, before concluding in Tokyo. With luck, Hanami festivals will light the city.

This link takes you to a list of books on Japan its culture & history. Or a guide from Odyssey travellers for mature travellers considering visiting Japan.

Odyssey Travellers designs tour packages for active, senior travellers. We provide authentic experiences, with a focus on education. We aim to turn tourists into travellers. If you would like to contact us about this, or any other of our small group tours, please call or send an email. We’d love to hear from you!