The History of Warsaw 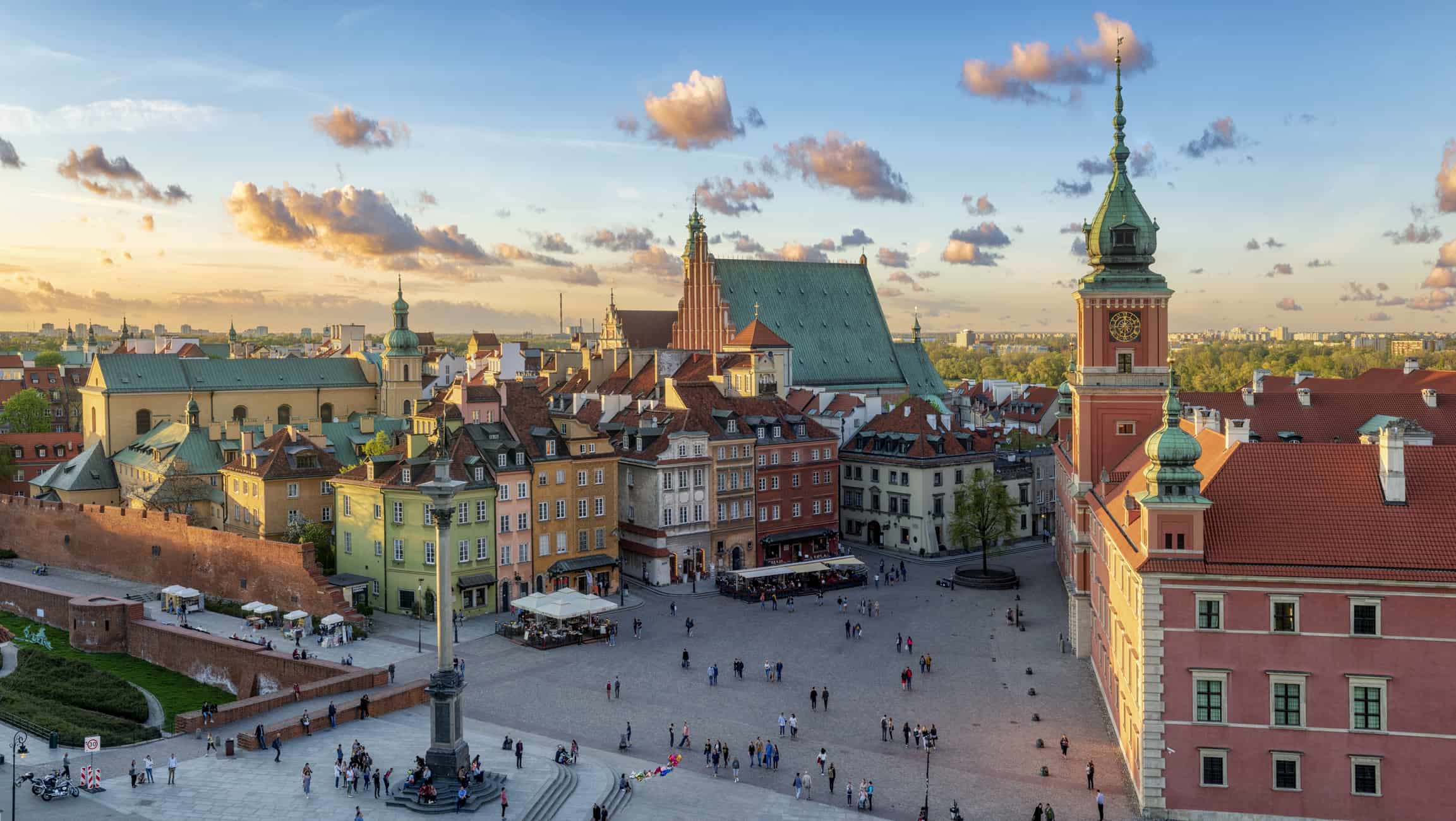 The History of Warsaw


Warsaw, the Polish capital city, has a fascinating history of cultural and economic development in the face of foreign occupation.  Emerging in the 14th century as an important central trading point, the city would go on to prosper over the centuries despite invasions and occupations by the Swedes, Russians, French, and Germans. A Warsaw visit reveals an amazing history of Polish culture, innovative democratic reforms, beautiful architecture, economic growth and industrialization, as well as occupation and destruction.

Odyssey Traveller currently offer two tours visiting Warsaw: a 21-day long Baltics Small Group Tour, and a 22-day long tour exploring Poland. These tours are designed for senior and mature travellers who would like to learn about history and culture with like-minded people in a small group setting (participant number is typically 6 to 12), using the knowledge and expertise of our tour leader and local guides.

Warsaw first began to develop from fortified settlements into what is now the old town around the beginning of the 14th century under the ruling dukes of Mazovia. The city’s importance picked up in 1413 when the dukes made it their new capital and it became a central trading point.

When the last duke died without an heir in 1526, the bourgeoning city became incorporated into the kingdom of Poland, beginning a period of dynamic development of stature under the Polish people. With the unification of Poland and Lithuania in 1569, the Sejm (lower house of Parliament) was relocated to Warsaw because of its central position.

King Zygmunt III Waza followed suit in 1596, shifting his Royal Court to Warsaw in 1596 making it the capital of the commonwealth. In 1643 the King Zygmunt III Waza Colum was built in the centre of the Castle Square, a monument to honour the king, distinctive symbol of the city, and one of the major attractions in Warsaw.

The Royal Court attracted many new citizens. Powerful gentry built residences in the city and new settlements sprang up around its periphery.

The period of prosperity was interrupted by the Swedish invasion (1655 – 1660) ransacking and plundering the city. But Warsaw swiftly recovered flourishing into the 18th century as the centre of the Polish Enlightenment. Particularly during the reign of King Stanislaw II August Poniatowski, a wealth of buildings was erected including palaces and churches, as well as the first state-school, theatre, and library. Notably, the Laizenki Palace was built at the foot of Ujazdowski Castle together with the National Theatre and Cadet School (Szkoła Rycerska).

Stanislaw II’s reign also saw major innovative reforms with the general populace handed more power and freedom in the May 3rd Constitution adopted 1791. The constitution was the first of its kind in Europe, only second in the world after the USA, and lay the basis for a democratic state.

Disappearance off the European Map

The 3 May Constitution and its reforms were not looked upon fondly by Poland’s neighbours triggering a Russian military intervention in 1793. In response the Poles launched a national insurrection in 1794, led by Tadeusz Kościuszko, with a notable victory at Racławicka. However, the uprising was ultimately crushed ending in the massacre of the civilian population in the Warsaw district of Praga. The partition of Poland among Russia, Prussia, and Austria ensued the following year.

The situation began to improve for Warsaw when Napoleon’s army marched through on the way to battle Russia in 1807 and the Frenchman created the semi-independent Duchy of Warsaw with the city as the capital.

But following Napoleon’s defeat and the resulting Congress of Vienna 1815, Warsaw and the rest of Poland fell under imperial Russian rule. Poland was wiped off the map and hopes of real national independence slashed. Uprisings in November 1830 and January 1863 were brutally crushed and patriots were exiled to Siberia.

Nevertheless, during Russian rule Warsaw developed rapidly. By the late 19th century Warsaw had developed into a major industrial centre with 450 factories of textile, metal, and tannery. It was growing into a modern metropolis with gas lighting and a modern water supply and sewage system, and had become the centre of a continental rail train network. Elegant buildings were also erected such as the Wielki Theatre, Staszic Palace and Belvedere Palace.

Following WWI Warsaw regained its status as the capital of independent Poland. Urban development and industrialisation continued: buildings, streets, railways, tramways, and an airport were all built; and by 1939 the population had grown to 1.3 million.

But its independence was short lived. German bombs began to fall on the city on 1 September 1939 seizing the city a week later and occupying it on 27 September. The Nazi occupation reduced Warsaw to a provincial city. Buildings were reduced to rubble, cultural treasures plundered, and its inhabitants transported to a labour camp or extermination camp – notably the famous Treblinka extermination camp north-east of the city. By the end of the war, 800,000 of the city’s people had died and 85% of the city was ruined.

The history of Polish Jews is particularly devastating as more than 450,000 of them were crammed into a tiny Ghetto district in Warsaw. The Ghetto Uprising in 1940 was brutally crushed but inspired other camp and ghetto revolts throughout occupied Eastern Europe including the escape of hundreds at Treblinka.

With the defeat of the Nazis in 1945, Warsaw was again made the capital of Poland. A massive rebuilding project was undertaken in the following decades, including a near-total reconstruction of the traditional Polish Old Town (A UNESCO World Heritage site), and the city expanded beyond its pre-war area and population. After 40 years of Soviet rule and communism, Warsaw underwent a rapid transition to a market economy from 1989. The city regained its strength experiencing rapid economic growth and an investment boom that continues today.

These articles were either published by Odyssey Traveller or are carefully selected external sources to maximise the senior travellers’ knowledge and enjoyment of Poland when visiting: 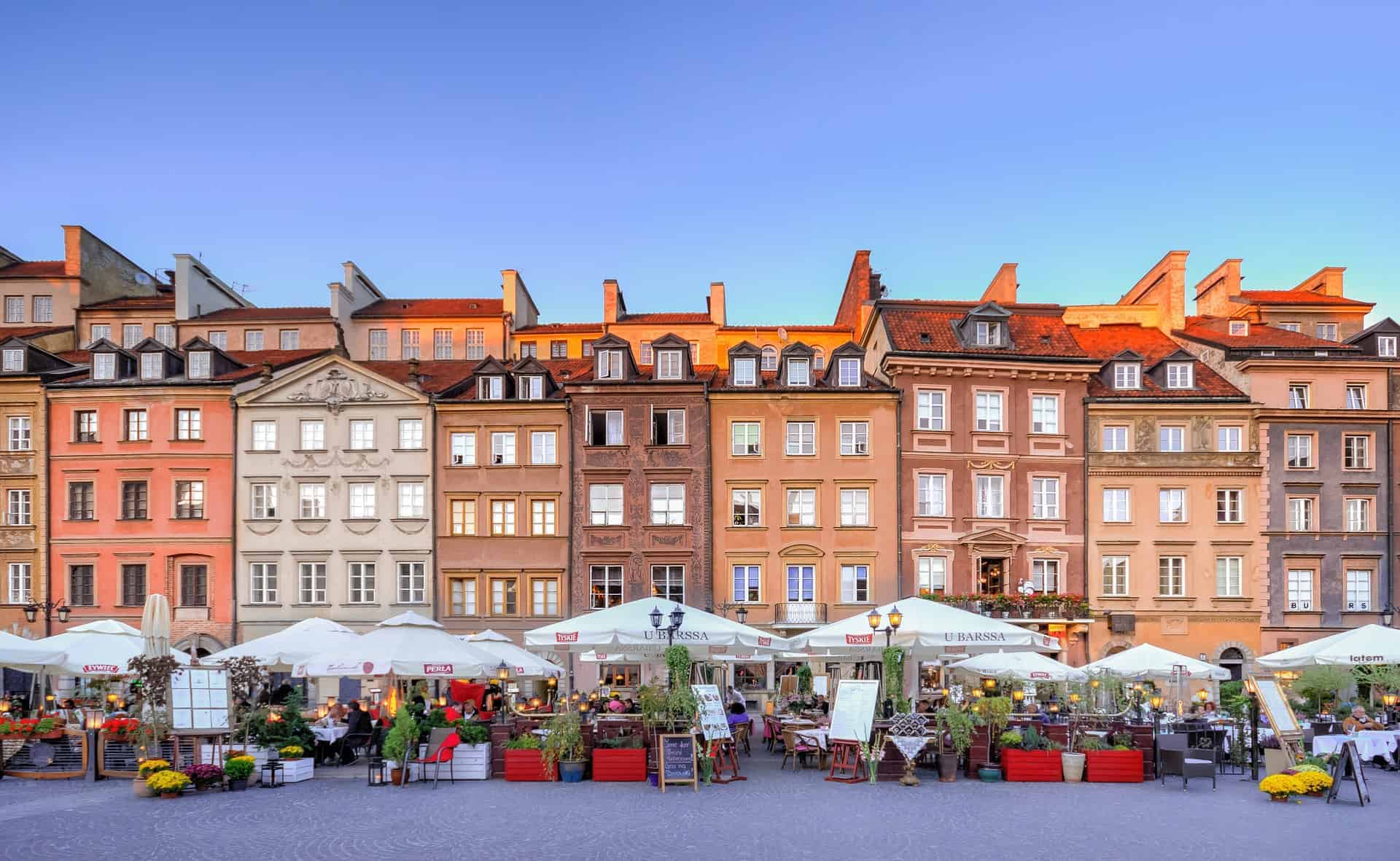 When we think about a historic centre, usually genuine, untouched architecture and monuments come to mind from medieval times and earlier. But as the city was almost completely destroyed in World War II, Warsaw’s Old Town is special because they managed to precisely restore how it looked like between the 13th and 20th century, and UNESCO honoured these efforts by inscribing it as a UNESCO World Heritage Site. 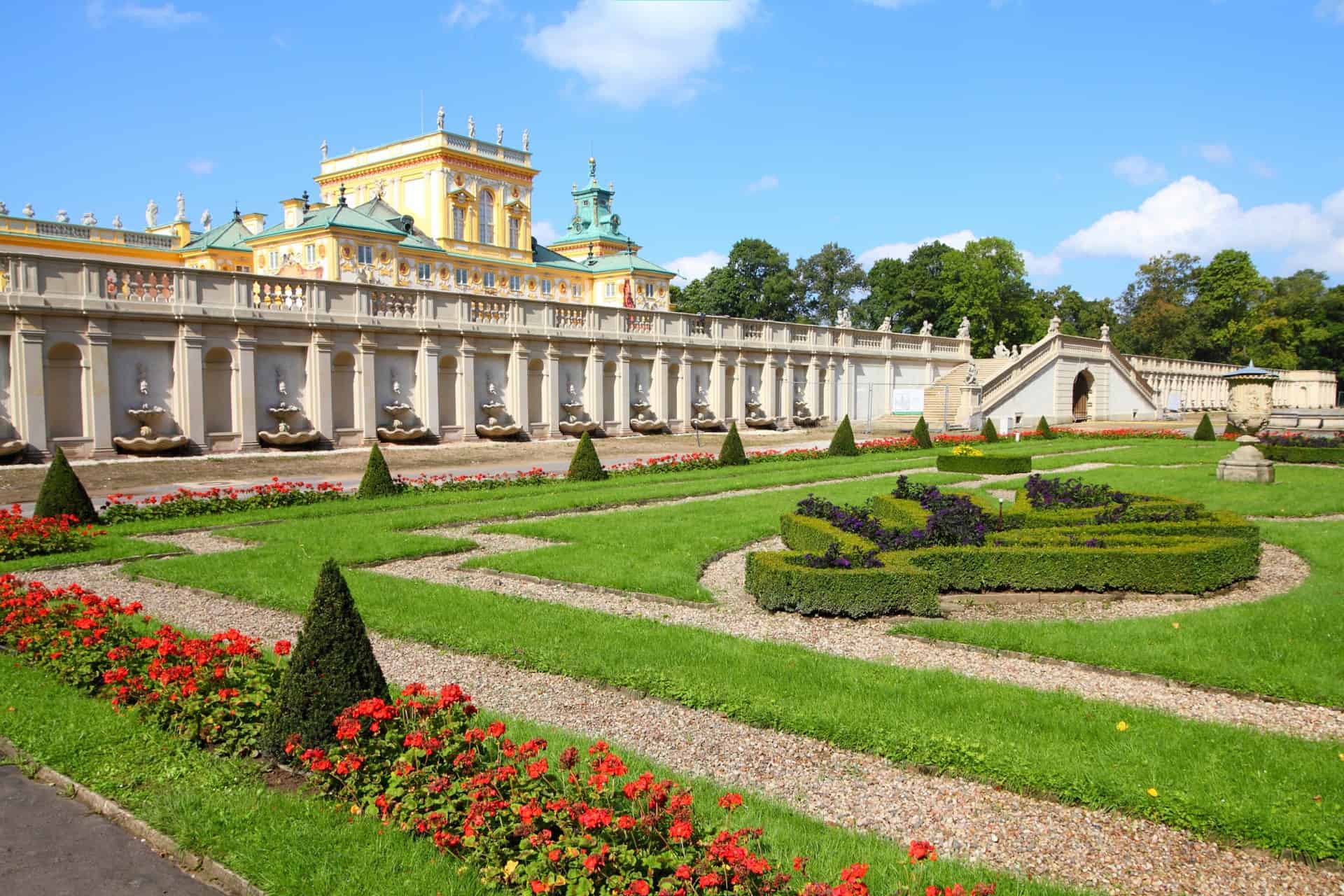 Wilanow Palace is the southern terminus of the Royal Route in the centre of Warsaw. The Palace survived both World Wars hence serves as one of the most important monuments of the country, showcasing the culture and history of Poland before the 18th century in the Palace’s museum. It was originally built for king John III Sobieski late in the 17th century and changed owners quite frequently before Stanisław Kostka Potocki opened one of the first public museums in 1805.

Palace of Culture and Science 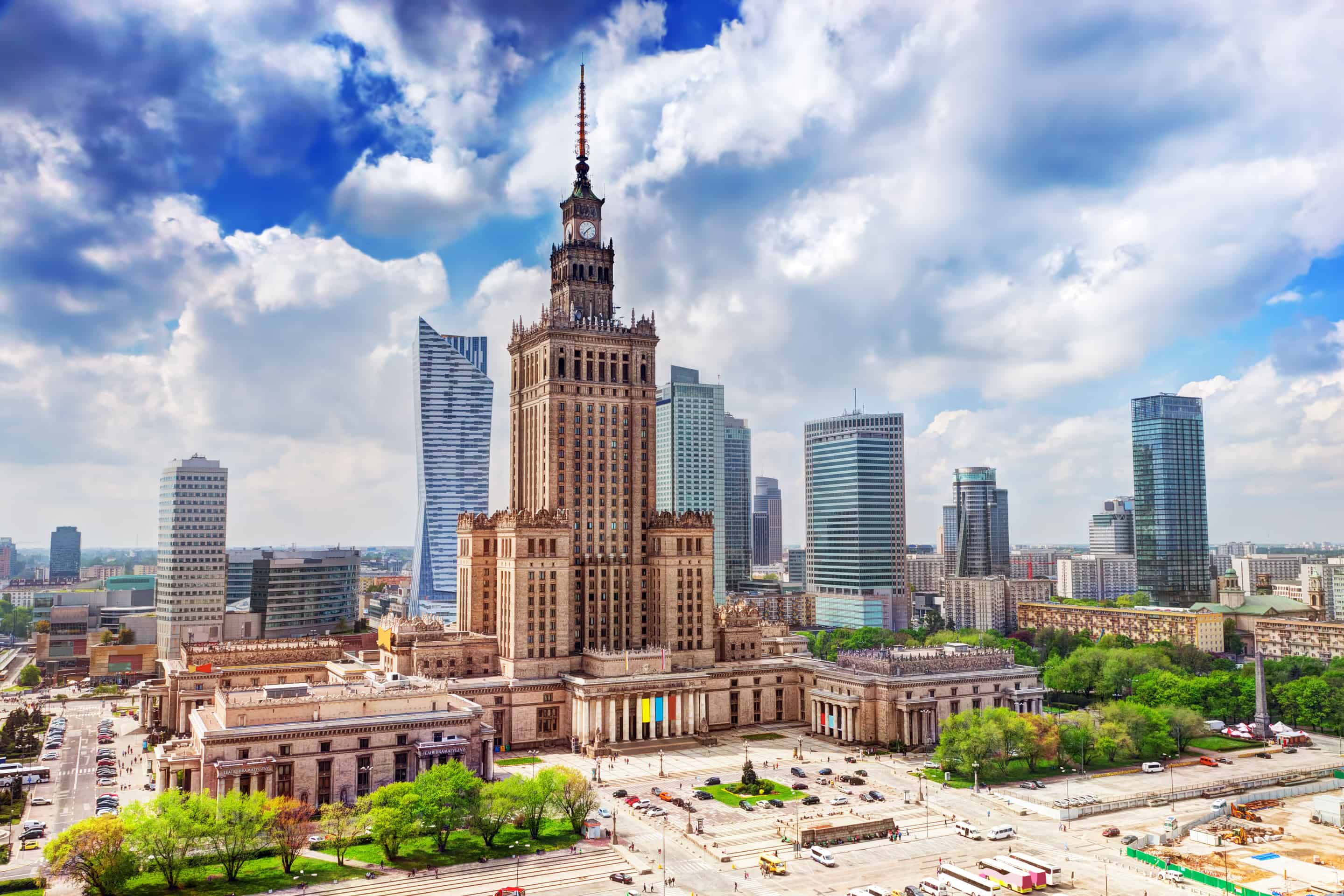 The Palace of Culture and Science are was a ‘gift of friendship’ from the Soviet Union to the Polish people, and it was built in the 1950s. It is Poland’s tallest building, standing at 234 meters. After the collapse of the Soviet Union, the building was de-Stalinised, and it was turned into congress halls, theatres, cinemas and the Technical Museum. It also has an observation terrace providing an amazing panoramic view over the city. 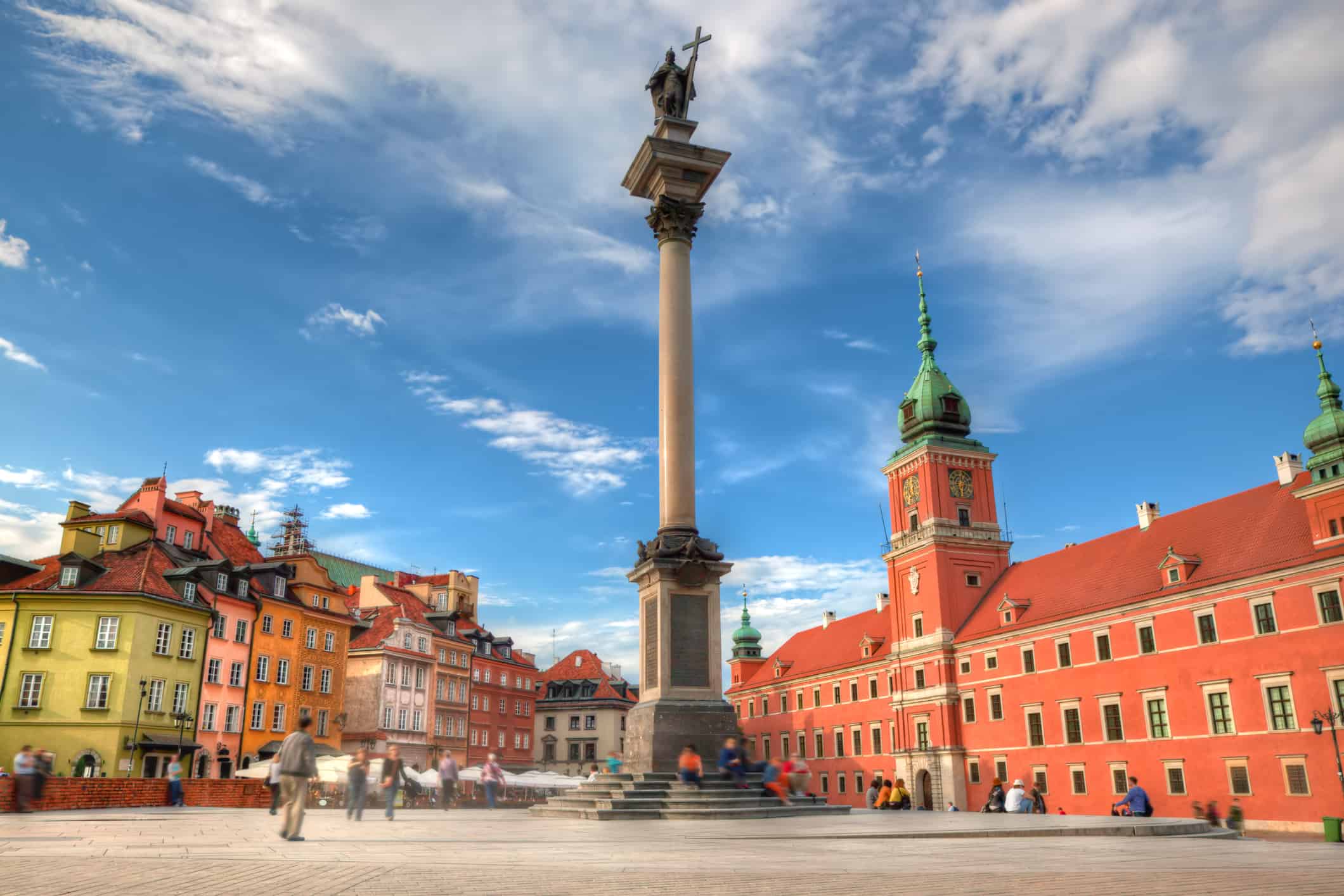 The Royal Castle stands on the Eastern side of the Castle Square. The castle organically developed over the centuries as each king added wings or redecorated the interior, up until 1945 when the German bombings destroying most of Warsaw left the place in ruins. However, as part of the reconstruction efforts from the city, the Royal Castle also got rebuilt from 1971 to 1984, and is now open to the public as a museum. It is also the starting point of the Royal Route (Trakt Królewski), a series of streets (including Nowy Swiat) running until Wilanow, featuring many other historic landmarks, and Lazienki Park (the largest park of Warsaw) as well.

Warsaw is full of museums well worth a visit. The Warsaw Uprising Museum (also known as Warsaw Rising Museum) is entirely dedicated to the Uprising of 1944, and it opened its gates to the public in 2004, on the 60th anniversary of the Uprising. The Museum of Warsaw (formerly Historical Museum of Warsaw) was established in 1936 but the building and its collections was destroyed during the events of 1944. The world-famous Polish composer, Frederic Chopin who was born in Warsaw, also has his own museum, the Fryderyk Chopin Museum, where visitors can learn about Chopin’s life, work, and see original manuscripts, letters, photos and sculptures of him.