A rugged Central Asian country dominated by the Tian Shan mountain range, Kyrgyzstan captures the intrepid traveller’s imagination with its breathtaking natural beauty and fascinating culture. Kyrgyzstan is landlocked and 90% of it is covered in mountain ranges. The dramatic landscape of formidable mountain peaks and deep, fertile valleys is impossible to avoid but it is the perfect place for exploring spectacular scenery and immersing one’s self in nature. Stay in a traditional yurt, experience the nomadic lifestyle, try horseback riding and learn the history of the great Silk Road.

Bishkek, the capital, is an increasingly vibrant vibrant city framed by snow-capped mountains. You will find tree-lined boulevards, buzzing markets and Soviet murals to explore. In Osh, the second-largest city, you can visit the country’s most famous and sprawling bazaar and discover over 3000 years of history.

Unless you’re a skier or snowboarder, summer and spring are the perfect months for visiting in Kyrgyzstan so you can fully appreciate the splendour of the country’s natural assets and the wonder of its alpine landscapes without the intense cold! 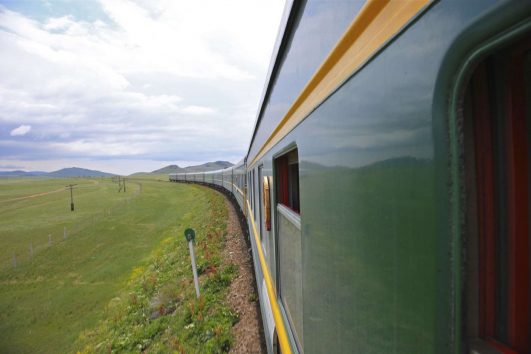 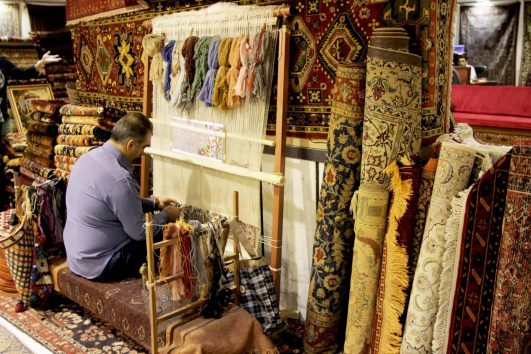 History of Persian Carpets: From the Nomadic Tribes of Iran to Europe’s Richest | Small group tours Iran In addition to its gardens and mosaic tiles, Iran (formerly Persia) is famous the world over for… 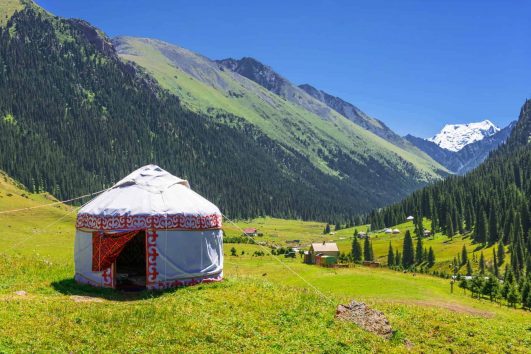 Questions about Kyrgyzstan for Senior Travellers

Explore and learn about on a senior travellers  small group tour of Kyrgyzstan and its pastoral, cultural and historic settlement.

Odyssey travels by coach and occasionally uses local transport, including trains and ferries. Specifics are always outlined in your tour itinerary. Coach services operate between Bishkek and several major towns in Kyrgyzstan. Train services are fairly limited, so might not constitute the best option for transportation while in Kyrgyzstan. Taxis are generally inexpensive and can be found in all major towns, though fares should be agreed upon in advance.

The climate in Kyrgyzstan varies from region to region, including temperate, dry continental, and polar climates. Temperatures can drop well below freezing in winter, especially in the mountain valleys, so depending on when and where you intend to travel, check the weather reports and dress accordingly.

Kyrgyzstan’s numerous festivals and events celebrate the unique culture and traditions of the nation. As a Muslim majority country, Ramadan is observed across the nation with fasting and prayer, the end of which is celebrated with the Eid al-Fitr holiday, featuring family parties and feasting. The nomadic traditions of Kyrgyzstan are celebrated in events such as the Bird of Prey Festival, where falconers and their birds take part in falconry contests, and the Kyrgyz Kochu Festival, which marks the traditional annual migration of nomadic herders and their flocks with national games, horse races, music, dancing, and celebrating.

Roaming Kyrgyzstan: Beyond the Tourist Track by Jessica Jacobson
The Silk Road in World History by Xinru Liu
Inside Central Asia by Dilip Hiro
The Silk Roads: A New History of the World by Peter Frankopan

The nomadic and pastoral traditions of Kyrgyzstan has heavily shaped the country’s cuisine, with meat a central part of Kyrgyzstani diet. Noodles often supplement meat in Kygyzstani dishes, including besh barmak (shaved lamb served with noodles and onions), laghman (meat, vegetables and noodles served with a spicy vinegary sauce) and ashlyam fu (a cold, spicy soup made of meat, vegetables and noodles). Like elsewhere in Central Asia, paloo (plov, or pilaf) is a popular dish, which features rice, carrots, onions and shredded meat. Breads and pastries also play an important part in Kygyzstan’s cuisine, with popular dishes including samsa (pastries filled with meat and onions) and borsok (small pieces of dough fried in oil).

Although Kyrgyzstan is a Muslim majority country, alcohol is consumed and is available in Kyrgyzstan, with popular alcoholic beverages including arak (vodka) and kymyz (fermented mare’s milk). Tea is widely consumed, with tea often offered to guests at meals.

As of writing, smartraveller.gov.au advises a degree of caution when travelling through Kyrgyzstan. There is a potential for civil unrest in certain areas, so avoid demonstrations and street rallies. It is advised to reconsider travelling to the Kyrgyz-Uzbek and Kyrgyz-Tajik border areas and the Ferghana Valley due to a potentially volatile security situation.

Whenever you travel overseas, it’s always wise to take an appropriate travel adaptor. Kyrgyzstan’s electricity supply runs at 220V and 50Hz. Kyrgyzstan uses Type C and Type F electric plugs, so make sure you have the right travel adaptor with you. 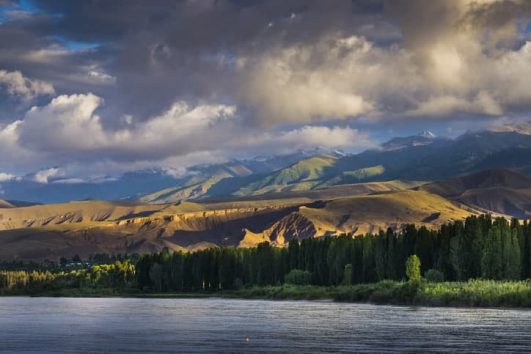 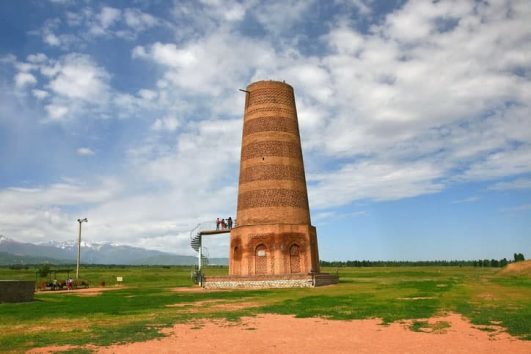 Burana Tower, an eye-catching minaret that stands as the last remains of the former city of Balasagun. 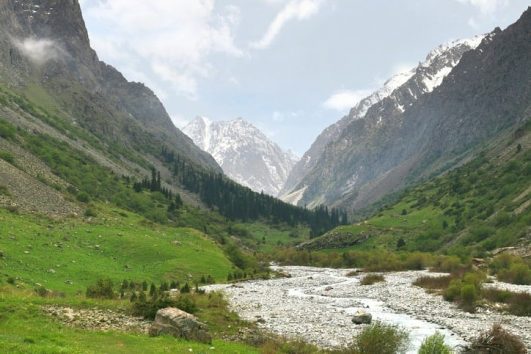 Ala Archa National Park, an area of stunning natural beauty.

Kyrgyzstan has a single time zone, Kyrgyzstan Time (UTC+6). Daylight savings are not observed in Kyrgyzstan.

Is tipping customary in Kyrgyzstan?

If you’re on an Odyssey tour, we take care of tipping so you don’t need to give it a second thought. However, in your free time, or if travelling independently, it’s essential that you tip an appropriate amount for services. Generally speaking, tipping is not mandatory, though can be expected amongst drivers, guides and hotel staff.

Wifi should be available in many hotels, cafes and restaurants when travelling in Kyrgyzstan, though speeds can vary.

Can I use my mobile/cell phone while in Kyrgyzstan?

Check with your cell phone provider to see whether you’re able to make calls and use data while in Kyrgyzstan. Many providers will allow you to pay a daily fee that allows you to make calls and check the internet while only being charged your regular rates. However, be certain to inform your provider that you’re heading overseas, because just like a bank they can turn off your service as a result of unusual activity.

External articles to assist you on your visit to Kyrgyzstan