Highlights of Lithuania | Hill of Crosses 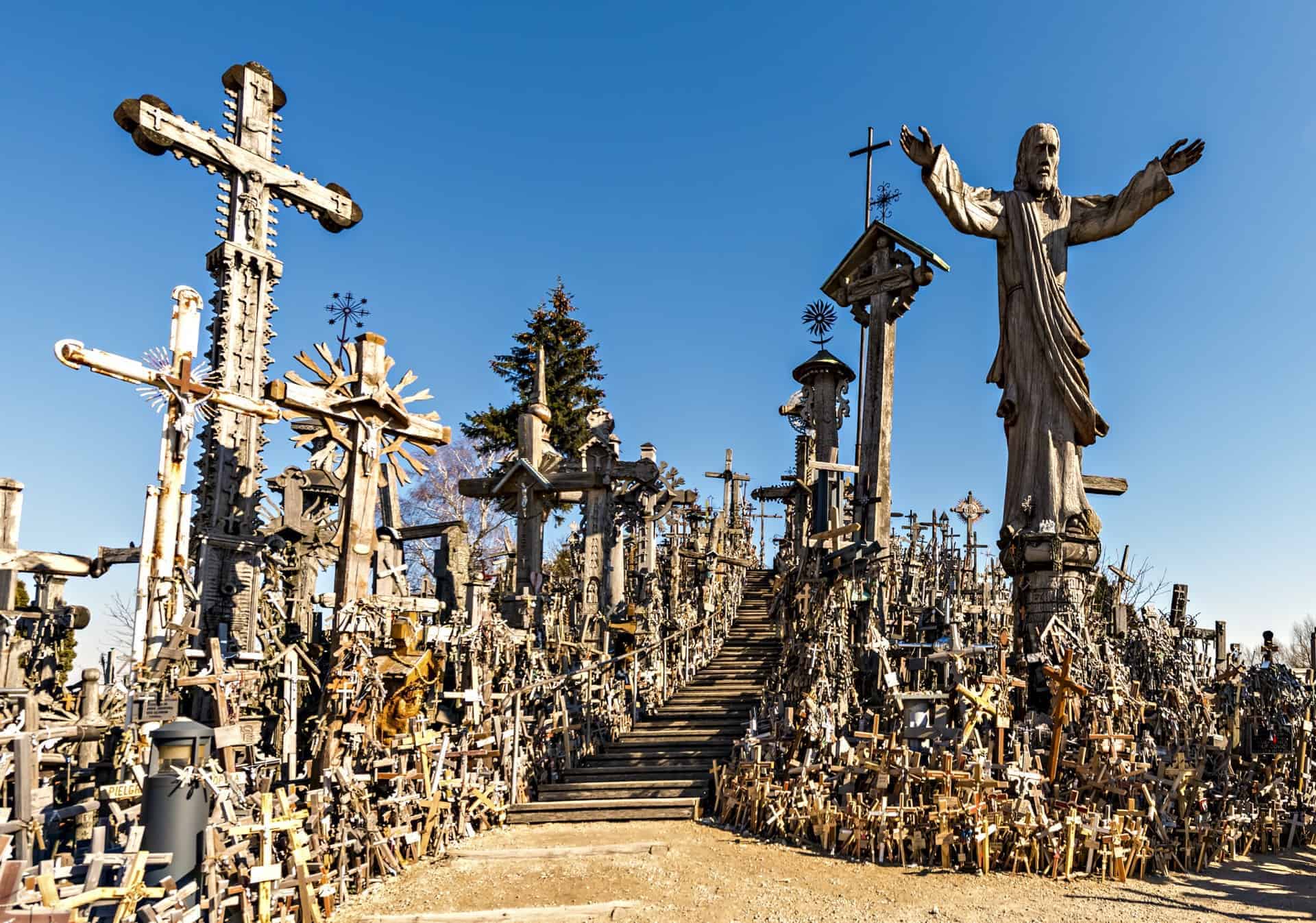 Highlights of Lithuania | Hill of Crosses

Just outside the northern city of Siauliai lies a small hill in the middle of farmland that has been crowned with around 100,000 crosses in all different sizes. There are tiny crosses, massive wooden crosses and crosses handcrafted from metal. Known as the Hill of Crosses (Kryziu Kalnas), it is both a pilgrimage site and a testament to Lithuanian strength and defiance under Soviet rule. It has come to represent the peaceful endurance of Lithuanian Catholicism in the face of so many threats throughout history. Whether you are religious or not, the mound of crosses accompanied by icons of saints and statues of Jesus makes for a truly spectacular and beautiful sight and it is easy to see why the Hill of Crosses is such a sacred place for so many. The Hill of Crosses is a two and a half hour drive from Vilnius and just over an hour and a half from Riga.

The History of the Hill of Crosses

The 3rd partition of the Polish-Lithuanian Commonwealth in 1795 resulted in Lithuania becoming part of the Russian Empire. In 1831, Lithuanians and Poles unsuccessfully rebelled against Russian authorities and it is believed that tradition of placing crosses on the site began as a way of commemorating victims of the rebellion, particularly as many families could not locate the bodies of fallen rebels. More crosses were placed on the hill following another unsuccessful rebellion in 1863. At the time the Tsar suppressed national identity and limited religious expression and as a result, families were forbidden to honour their dead with a proper burial.

In 1918, Lithuania declared its independence and the Hill of Crosses became a place of prayer and reflection. Many Lithuanians travelled to the hill to pray for those they had lost in the war of independence. When Lithuania was occupied by the Soviet Union between 1944 and 1990, the site took on a special significance. Lithuanians placed crosses on the hill to show their allegiance to their country and their pride in their religion and heritage. It became a symbol of peaceful resistance but the Soviets saw the hill as a symbol of hostility against their rule. In response, the Soviet army bulldozed the hill several times and burned down the crosses. Still, proud Lithuanians continued to place crosses there, despite the risk of harsh punishment if they were caught. By 1973, 500 crosses were placed on the hill when it was again destroyed by the Soviets. This time, the Soviet army sent troops to guard the hill and even then, Lithuanians visited the hill in the dead of the night to make sure new crosses popped up each day.

When Lithuania gained freedom in 1991, the hill became flooded with crosses and in 1993, Pope John Paul II visited the site and declared it a place for hope, peace, love and sacrifice. Today, it is a symbol of the strength of Lithuanian culture and their unshakeable faith. UNESCO recognises cross-crafting as part of the intangible cultural heritage of Lithuania and as a result the Hill of Crosses is an extraordinary example of this tradition in practice.

Visiting the Hill of Crosses

As Vilius Puronas, a local artist and historian, told the BBC, ‘the Hill of Crosses doesn’t really belong to anyone, and thus belongs to all. Neither church nor government has any claim to it, and people bring crosses here not because they are told to, but because they feel inspired to’. The Hill of Crosses is open to visitors, 24 hours a day, year-round. It is free to visit and visitors can place their own cross on the hill.

There are two important crosses to look out for when visiting the site. The first is a cross featuring a sitting Jesus under a roof, praying in a secret. His expression is one of sadness and he represents the many Catholics who were forced to worship in secret under the Russian government. The second special cross stands front and centre when you visit the Hill of Crosses and was donated by John Paul II following his 1993 visit. It is large metal cross with a marble base. The base is inscribed with a message of thanks from the Pope to the Lithuanian people for their faith in the Church.

The Hill of Crosses is an eerily beautiful site but it also tells a story of Lithuanian culture and history. As a symbol of resistance, it tells visitors about the oppression suffered by the Lithuanian people and the political structure they suffered under. It is a monument with a rich story and is a worthwhile day trip from Vilnius.

If you’re interested in marveling at these thousands of Christian crosses, you may be interested in our Baltics tour. On this tour, we visit the Hill of Crosses on our way to Riga. For more information on Lithuania, check out our country profile.