Mature-aged solo travel continues to grow, and for those in their 50s, holidays for solo travellers over 50 is an important one.

Hitwise, the UK’s largest online behavioural research tool, said in 2018 that there had been a whopping 143 percent increase in “solo travel” searches over the past three years, after analysing searches made by 3 million consumers in the UK across all search engines.

According to a 2017 survey conducted by US marketing firm MMGY Global , one in four Americans said they would travel solo, an attitude “as prevalent among Millennials as it was among Baby Boomers.” Baby boomers as a demographic is defined as those born following the end of World War II (usually considered to be in the years from 1946 to 1964).

The 2019 American Association of Retired Persons (AARP) survey shows that Boomers continue to be avid travellers, planning to take a total of 4 to 5 leisure trips in 2019. Included in the Top 6 of planned international travel is “solo travel” (7%). 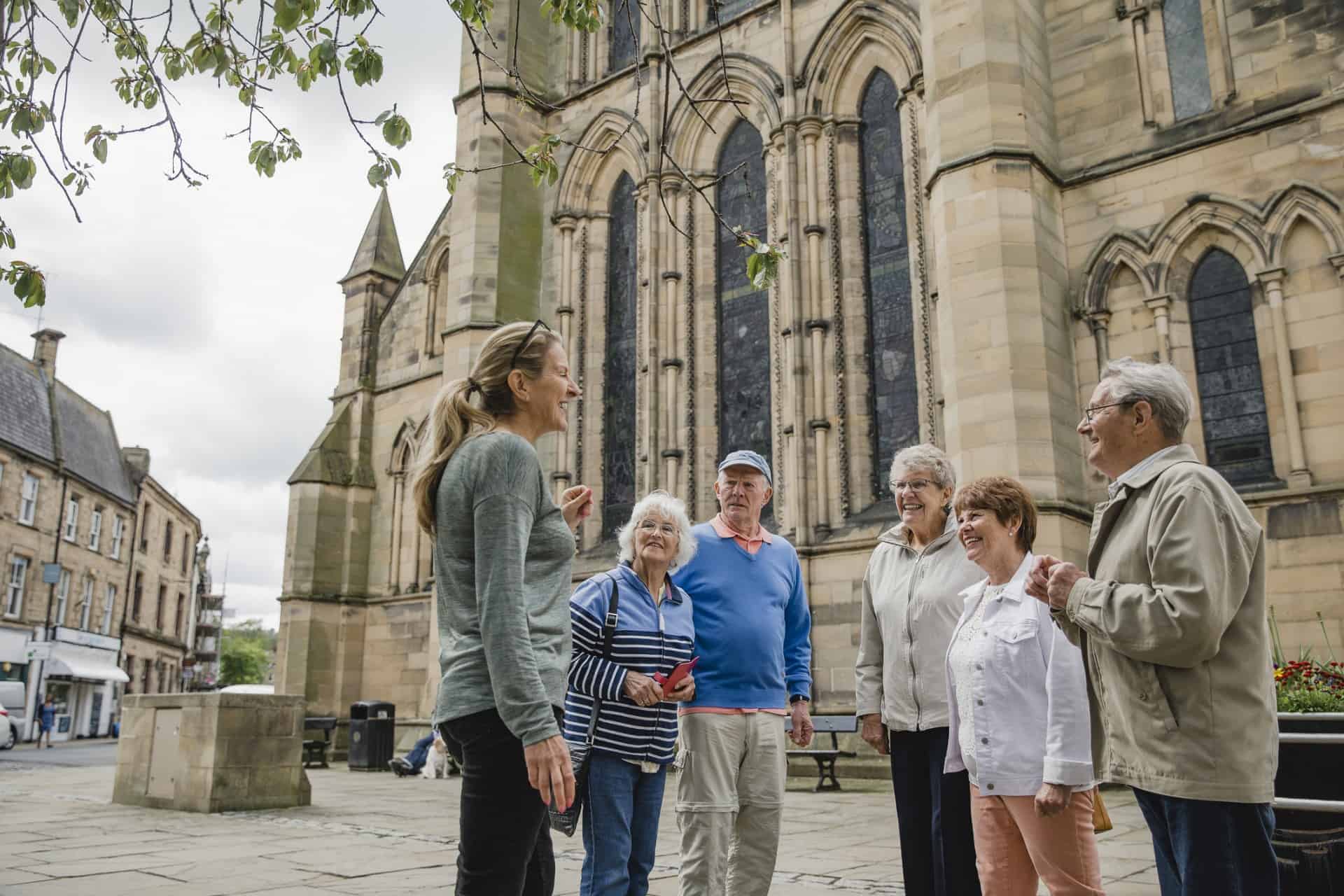 Why do people choose to take a solo holiday?

The reasons why travellers choose to travel solo vary. Plenty of travellers seek out holidays for solo travellers over 50, this is a solo adventure to experience their destination at a deeper level. As a solo traveller, you set the pace and make the choices: wander where you want, eat what you want, and leave when you please. You no longer need to worry about a travelling partner who wants to stay cosy in the cabin, when you’re itching to get out into the beautiful scenery of your chosen destination.

Travellers find that locals are much more likely to approach you when you travel alone – with lucky solo travellers often becoming the guests of locals.

Most of all, a solo holiday is the way to get to know yourself and to build resilience. When you’re done, you’ll inevitably look back on your trip as a time you challenged yourself and came away a stronger, more independent person. However for mature and senior traveller single travel may be a consequence of life change. Their partner may be suffering from illness preventing travel or a divorce or early death. Many factors will shape whay a person is seeking out siuitable holidays for solo travellers over 50. At Odyssey we seek to have an understanding of the issues around single travel, having specialised in looking after retired travellers since 1983.

One of the biggest worries for potential solo travellers is the concern that being alone for so long might be lonely. Travellers frequently ask whether it is easy to meet other solo travellers on their journey.

The answer is that with solo travel becoming more and more common, you’ll certainly meet others who are on a solo holiday.

The majority of mature-aged solo travellers do not wish to travel alone. According to London-based global market research firm Mintel in their 2018 Solo Traveller Report, 52% of solo travellers were interested in taking an escorted tour.

This is where Odyssey Traveller comes in. We offer fully escorted tours designed for mature-aged travellers, and we generally have a mix of those travelling solo and as a couple. We have been providing adventure and educational programs to small groups since 1983. A “small group” for Odyssey is typically up to 16 travellers, but we’ve experienced running a tour with as few as four people.

This is a comfortable alternative to big-bus tours for large groups, and an excellent option for those travelling solo but would like a hassle-free travel experience.

Travelling alone can be an intimidating prospect, particularly in a group tour environment. But on an Odyssey tour, you are not the only solo traveller. Our Australia or New Zealand-based Program Leader, who will escort your group for the duration of the program, will usually be also travelling solo. Our small group tours have like-minded people, travelling by themselves or with their partner. In fact, the more adventurous destinations tend to be dominated by solo travellers! Odyssey Traveller’s small group tours are not designed strictly as solo travel tours, but are a group tour designed for those who like to explore and learn as they travel. We see travel as a form of education. The focus is on history and culture, allowing participants to more fully experience a destination in the context of the past events that have shaped it.

Roy Morgan’s 2015 survey appears to back us up regarding our participant demographic; the survey says that “solotravellers from the 50-plus group were more likely than their younger counterparts to report having visited museums, art galleries, gardens or parks and historical places, but less likely to have gone shopping or attended a concert.”. Education is not a short-term effect–you can reap the benefits long after a trip has concluded, making you a happier person who is more compassionate and more engaged with the world. (Read our related article: Why Join A Small Group Tour? )

Travelling Solo as a Mature-Aged Woman

Women are driving the growth of solo travel, claims MMGY Global. A Booking.com poll revealed that 72% of American women are taking solo journeys.

The reasons why women are more likely to travel alone than men are an issue of debate. Some have suggested that women are better able to cope with being alone for extended periods of time. Others have linked the increase in women choosing to travel alone to women’s empowerment: increased freedom for women in the later 20th and 21st century has empowered Baby Boomers and Millennials to do what would have been a dream for many generations of women. For many women, setting off on a solo trip is a chance for freedom and independence, to challenge oneself, and build confidence. It’s not surprising that out of the 72% who have travelled alone, 59% are planning to do so again within a year!

Of course, women have travelled alone for centuries. If you’re looking for inspiration, check out the fascinating stories of these Five Female Explorers .

However, solo female travellers are also likely to worry about their safety. Unfortunately, women travellers can encounter threats to their safety than men do not experience. However, there are many ways for women to feel safe while travelling. For example; make sure to research your destination closely before you head off. Find out what the expectations for women’s dress are, and work out how to navigate common problems. Look into what places it might be better to avoid. You’ll find that the internet is a great resource – as is another fellow traveller who has been to your destination.

We have a number of resources about safe travel.

Whatever you do, try not to feel intimidated about travelling alone as a woman. A majority of our travellers here at Odyssey are women, many of whom are solo. We cater to women seeking all kinds of experiences and offer flexibility but in a small group tour enviroment as part of an escorted tour with a tour director. Whether you want to balance education with independent travel, or are on a tour to meet like-minded friends, our holidays for solo travellers over 50 can work for you. For a solo traveller on a small group tour with Odyssey there is a single supplement for single travel. This covers the cost of single room occupancy for a room with a double bed. We have a clear policy on making this happen across Europe as this is exactly what are customers expect from us when they travel and acknowledge the cost of sole occupancy. There is no other cost though for travelleing as a single on a escorterd tour. 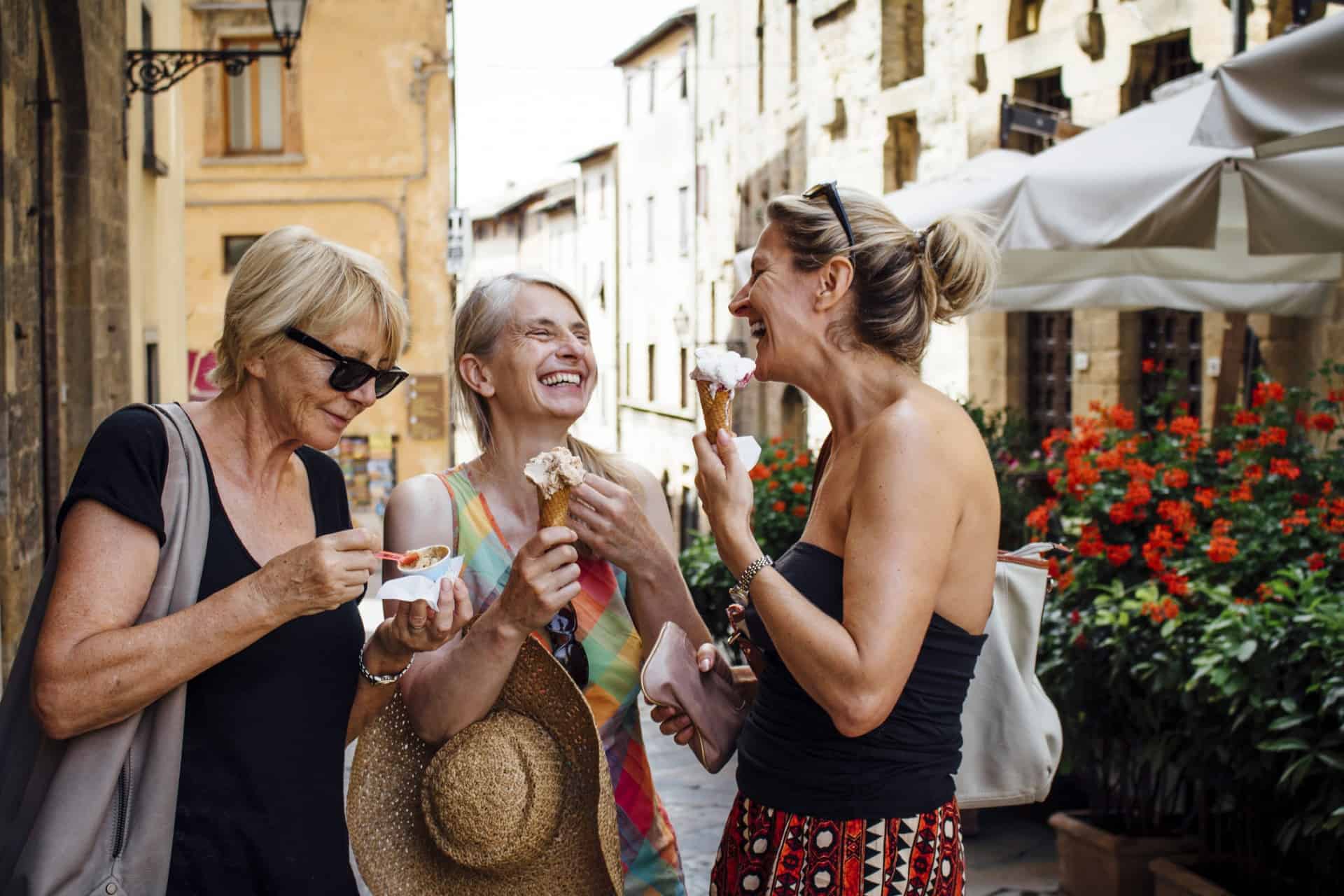 We have summarised the steps for you to take in order to make your solo travel dream a reality. Odyssey Traveller is easily reached by email or phone. Our friendly and experienced staff can help design the adventure you are seeking.

1. Think about where you want to go

The first step is to sit down and really think about the kind of holiday you want.

Is it an exotic journey across Japan by rail? Perhaps you want to indulge your passions – for history, for archaeology, perhaps even Scandinavian architecture and design. The challenges of a walking tour might build up your confidence so that you can return home fitter and ready to take on anything. Or perhaps you just want to discover as much of the world as you can. Once you have determined the type of holiday you are craving, narrow it down to some dream destinations. Time of year is something to bear in mind. This will influence how practical your dream destination might be. Our article on responsible travel might point you toward some places you had never even thought of! 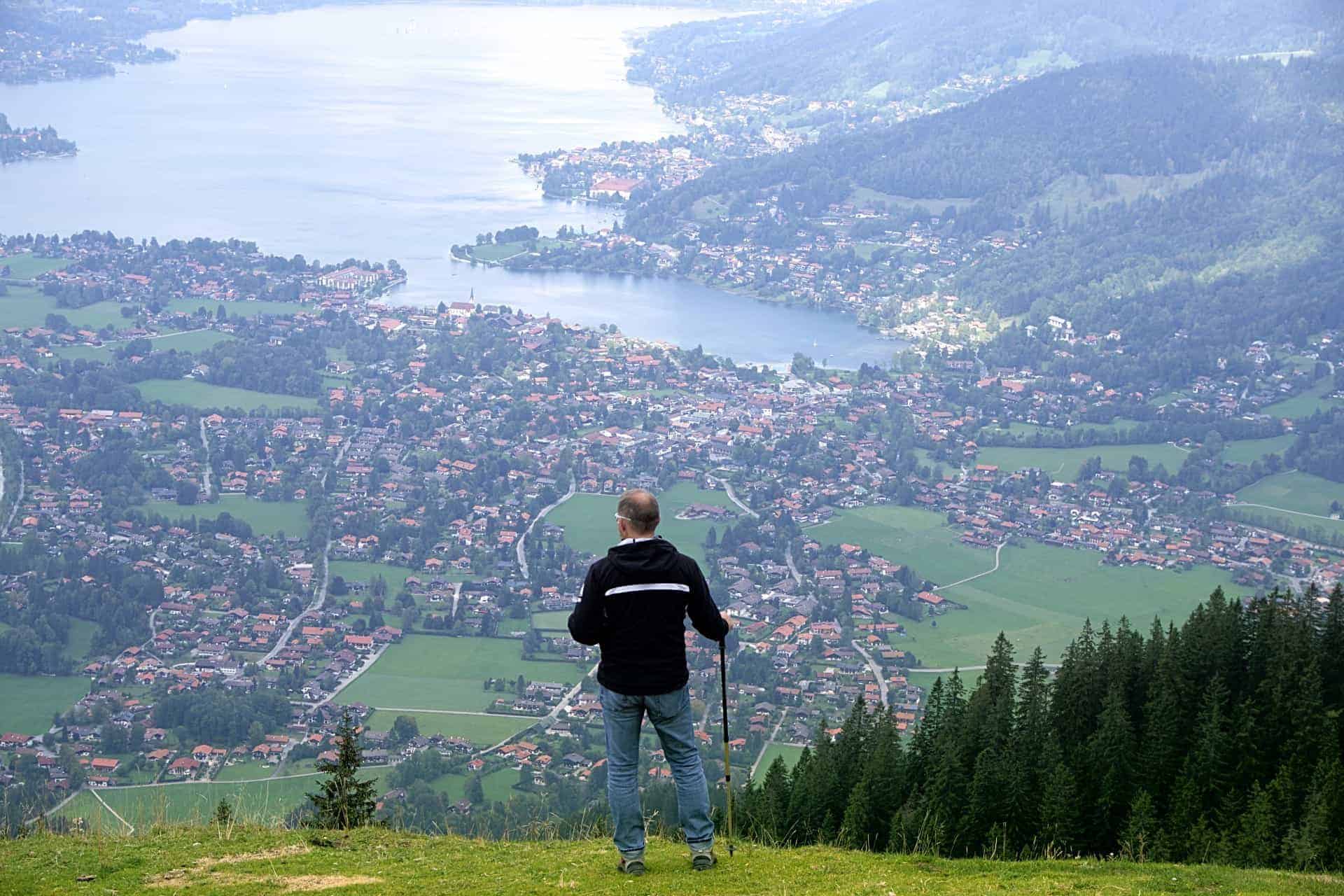 Affordable small group tours with Odyssey Alumni For Odyssey Travellers who regularly travel with us over a number of years, the organisation offers a three level Alumni loyalty program. This […]

Ancient Routes, Fresh Eyes: Nine European Pilgrimage Routes for the Modern Traveller The word ‘pilgrimage’ or ‘pilgrim’ comes from the Modern French word pèlerin, which means ‘foreigner, stranger’, highlighting the concept that the faithful is not of… 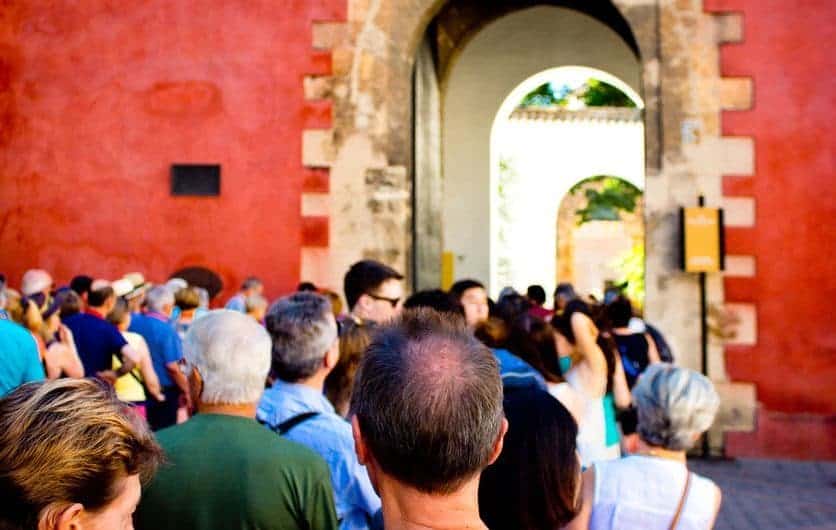 Avoiding the crowds and queues on holiday

Being Travel fit: The Definitive Guide

Being travel fit, in mind and body. In this article, we will discuss ways in which to treat your mind and body, ensuring you remain travel fit and enjoy your time as a mature-aged or…

Five Female Explorers and their Adventures There are many female explorers who have been forgotten or are not as widely remembered as their male counterparts–Gertrude Bell, for example, has been overshadowed by her male colleague,…

Graceful Ageing: Tips to Counter Age-Related Muscle Loss We experience a lot of physical and mental changes as we grow older, but one of the most insidious of these changes is a common condition called…

How to choose your next small group tour

Deciding on which tour company to choose maybe difficult, personal recommendation is a good start. At Odyssey Traveller we have been providing small group tours to  mature and senior travellers couples and solo travellers since 1983 to places all around the world.

Packing Advice for Odyssey Traveller’s Small Group Tours Many travellers ask us how best to prepare for their Odyssey Traveller programs, seeking out advice on clothing, medication, insurance, among other concerns when travelling overseas. This article…

Selecting Shoes and Socks: Advice for Mature Travellers Walking–we typically perform this motor function without any thought for our body movement or concern for our feet! Yet, transitioning from general activity to a walking and…

Choosing the Right Walking Shoes: Advice for Women For women, especially older adults, choosing the right walking shoes has repercussions beyond fashion. A study in 2005 showed that “incorrectly fitting footwear is common in older…