Charles Sturt and the search for the inland sea 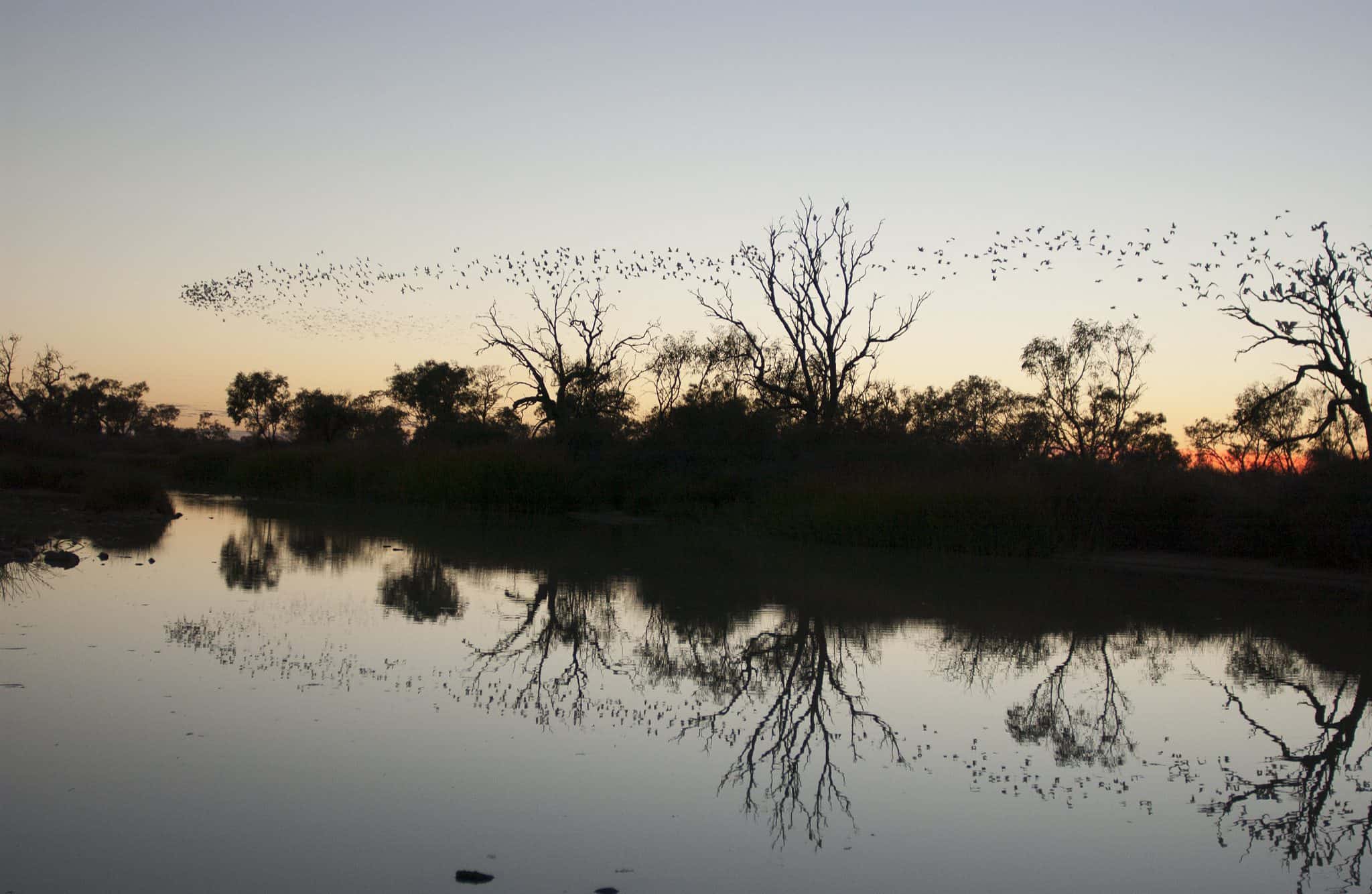 Charles Sturt and the search for the inland sea

In 1844, the explorer Captain Charles Sturt set out with a large party into the central Australia to find what he believed would be an inland sea. This latest course of exploration had begun at Narrandera, onto Balranald where the party crossed the Murrumbidgee river towards the Simpson desert. A legend in his day, Captain Charles Sturt had successfully charted the Murray river and the Darling River – but his quest for water would bring him through some of the most arid and desolate areas of inland Australia. An Odyssey Traveller small group tour follows part of Sturt‘s adventures on our educational tours of Australia for mature and senior travellers, joining a program as couple or solo traveler.

Charles Napier Sturt was born in India in 1795. At the age of five, he was sent to England where he lived with relatives and attended the Harrow school. Though born to the British upper classes, Sturt’s father did not have the money to allow him to attend Oxford or Cambridge, so Sturt enlisted in the army in 1813, serving in the Napoleonic Wars and the War of 1812.

In 1827, Sturt arrived in Sydney for garrison duty, where he soon developed an interest in the landscapes and geography of the new colony. For 25 years after the first British settlement in 1788, the Blue Mountains had restricted colonists to the Sydney basin. In 1813, Gregory Blaxland, William Lawson, and William Wentworth crossed the Blue Mountains, opening up central Australia to European explorers.

Thanks to these explorations, settlers became fascinated with the western flowing rivers of New South Wales – leading to speculation that they headed towards an inland sea. Having impressed Governor Darling of New South Wales, (Sir Ralph Darling), in 1828 Sturt received permission to follow the Macquarie River in western New South Wales. Accompanied by explorer Hamilton Hume, they came across a ‘noble river‘ flowing to the west, which Sturt named the Darling River, after the then-governor.

The discovery of the Darling River bolstered Sturt’s belief that there was an inland sea. On a second expedition from 1829-30, he followed the Murray River in a boat through the mallee country of the Victoria/New South Wales border, finding where it met the Darling – and then following the combined river south to where it met the sea, near the Fleurieu Peninsula, South Australia.

Finding that the Murray-Darling river turned south to the sea made the prospect of an inland sea much less likely. This was further confirmed by the explorations of Edward John Eyre – who reached the Flinders Ranges and crossed the Nullabor Plain in 1840-1841. By 1844, most colonists doubted that an inland sea existed – something which had long been known to Aboriginal people who traded widely across the continent.

Following his return from his 1829-30 journey, Sturt returned to England, where he married Charlotte Greene, a family friend. The Sturts returned to New South Wales, setting up a pastoral station they called Belconnen, near present-day Canberra. Yet, despite his happy, quiet life, Sturt was increasingly obsessed by the inland sea. Increasingly running against majority opinion, he was unshakeable in his conviction that the sea existed – and that he had been ordained by God to find it.

On the Darling River in 1829, Sturt had noticed that birds flew north-west in a time of drought. Where were they heading, if not to water? Later, while living in Adelaide, he noticed birds flying north. Projecting both routes, he concluded that the inland sea existed where the two met. (In fact, the birds were heading to inland creeks and lakes, not the sea that Sturt imagined).

On 10 August, 1844, Sturt set out with a slow-moving expedition of 15 men (including the explorer John McDouall Stuart), 11 horses, 30 bullocks, four wooden carts, and 200 sheep. Hoping that they would encounter the sea, two of the men chosen were sailors, and the expedition dragged a boat behind them. With the carts, Sturt was lucky to cover 30 kilometres a day.

From Adelaide, they headed up the Darling River, reaching Menindee on October 1844. The Menindee Lakes, today a local tourist destination, proved to be the closest thing to a sea that Sturt would encounter on his journey. Noticing an Aboriginal man in the area, Sturt assumed that water was nearby – but a journey into the Barrier Range, near present day Broken Hill, finds nothing.

Over subsequent weeks, Sturt and his party headed away from the Darling River, digging wells in order to find fresh water. In mid-January 1845, 300 kilometres north-north-west of Menindee and desperate for water, Sturt discovered permanent water on the Evelyn Creek, which he named Depot Glen.

As drought evaporated all the other water sources, Sturt’s party remained trapped at Depot Glen for six months. Though they had fresh water, provisions slowly dwindled, and many of the men started to get scurvy. The hundreds of animals which accompanied them drank up to 5000 litres of water each day, which meant that the water level of Evelyn Creek dropped substantially! Sturt’s men – who surely would have begun to doubt the existence of the sea – became increasingly restless, but Sturt continued to write confidently in his diary that an inland sea lay only 250 kilometres to the west. 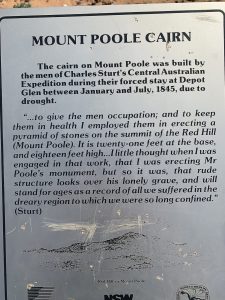 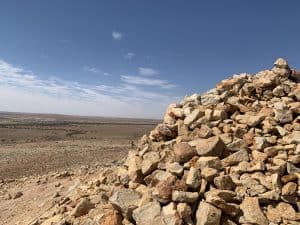 In July, Sturt’s deputy James Poole died of scurvy. The party buried him under a grevillea, marked J.P 1845 – one of the few tangible legacies remaining of their journey.

Soon afterwards, they are freed by heavy rains. Sturt reached Fort Grey, 90 kilometres away in what is now the north-western corner of New South Wales. Leaving the drays and the boat at Fort Grey, Sturt headed west toward Lake Blanche, South Australia, following ground water left by rain. Discovering that Lake Blanche was a dry salt lake, Sturt was disappointed. As one of his men, Daniel Brock, wrote:

The Captain feels dreadfully chagrined that the lake is dry … The most sanguine hopes have been entertained that we should float the boat … but there is barely water to float a duck … This scene is the Climax of Desolation – no trees, no shrubs, all bleak barren undulating sand. Miserable! Horrible! 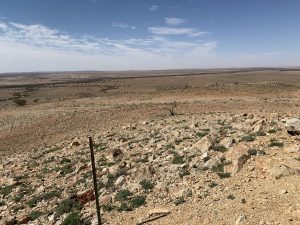 Yet, even after this Sturt remained steadfast in his belief. ‘I still confidently expect to find an inland sea to the north-west,’ he wrote in his journal. He returned to Fort Grey and then headed out again, finding the Strzelecki Creek (along which the Strzelecki Track now passes). Following it north, he found a desert filled with rocks and pavement-like stones, today known as the Sturt Stony Desert.

Finally, they reach the more stable waters of the Cooper Creek, west of Innaminka, where Burke and Wills would meet their doom fifteen years later. They were exhausted: each man subsisted on only five pounds of flour (for damper) each week, tea, sugar, and an occasional bird. Sturt became increasingly despondent. ‘The country in truth is not to be understood’, he wrote in his journal. Despite the fact that they had reached the location where he believed he would find the sea, there was ‘no sea, no river, no hills’. Sturt accepted that he could not bring the boat from Fort Grey, but continued to haul a cart across the desert.

Passing what is now the town of Birdsville, Sturt reached his final point by following Eyre Creek into the Simpson Desert, beyond the ruined station of Annandale. His resolve broke on November 6, 1845, and he returned yet again to Fort Grey.

Yet – against the entreaties of his party – Sturt headed north again, following the Strzelecki Creek and Cooper Creek to a point west of today’s Innamincka. Having given up on the prospect of the inland sea, he was motivated by a desire to reach ‘the centre’ of Australia. Two weeks later, reaching a point north of Birdsville, he decided to finally turn back, writing in his diary that:

I had no hope to whatever quarter I turned my eye – a country utterly impracticable, a creek from which it was vain to expect a supply of water… I determined on returning to the Depot, satisfied that no exertion of mine would enable me to cross this heartless desert in which I was.

Racked with scurvy and close to death, he made his return journey, dragging his boat back to the Darling River where it was finally able to float on water. On return, Sturt’s sight began to fail. Soon after, he and his wife and children returned to England. In 1869, he received a knighthood, but died before the formalities were completed.

Odyssey Traveller follows Sturt’s path to find the Inland Sea as part of our tour of the outback, Broken Hill and ‘back. Designed for curious mature-aged and senior travellers, this Australian outback adventure takes you through some of the most remote parts of New South Wales, South Australia, and Queensland. Our guided tour begins in Broken Hill – named by Sturt on his journey to find the inland sea – then winds our way up to Birdsville. We then take on the famous Birdsville Track, passing to Marree, South Australia, before returning to Broken Hill. On the way we see quirky outback towns, visit historic mining settlements and learn about traditional land management practices from local Aboriginal communities, while we travel through some of the most beautiful desert landscapes of Australia‘s red centre.

Travellers interested in an Australian outback experience may also be interested in some of our other tours. Our tour of Outback Queensland visits the quintessential outback towns of Longreach, Winton and Barcaldine, and explores ancient dinosaur fossils at the Australian Age of Dinosaurs. We also have a trip through the Flinders Range National Park, including a scenic flight over vast Lake Eyre, and takes on the infamous Oodnadatta Track. You might also be interested in our tour of Kakadu and the Northern Territory, which visits Arnhem Land, Litchfield National Park, and Darwin, and our tour of the Kimberley, which explores one of the most remote regions of Australia‘s outback, taking in stunning landscapes where the red dirt meets the sea, and viewing some of Australia‘s most incredible Aboriginal rock art.

An Odyssey Australian outback tour is designed to get off the beaten path, taking in more than just the tourist highlights. We take the time to learn about the history and culture of each itinerary destination, joined by our knowledgeable tour operator/tour guide. Each outback Australia tour is for small groups, generally between 6 and 12 like-minded people.

External articles to assist you on your visit to Broome: