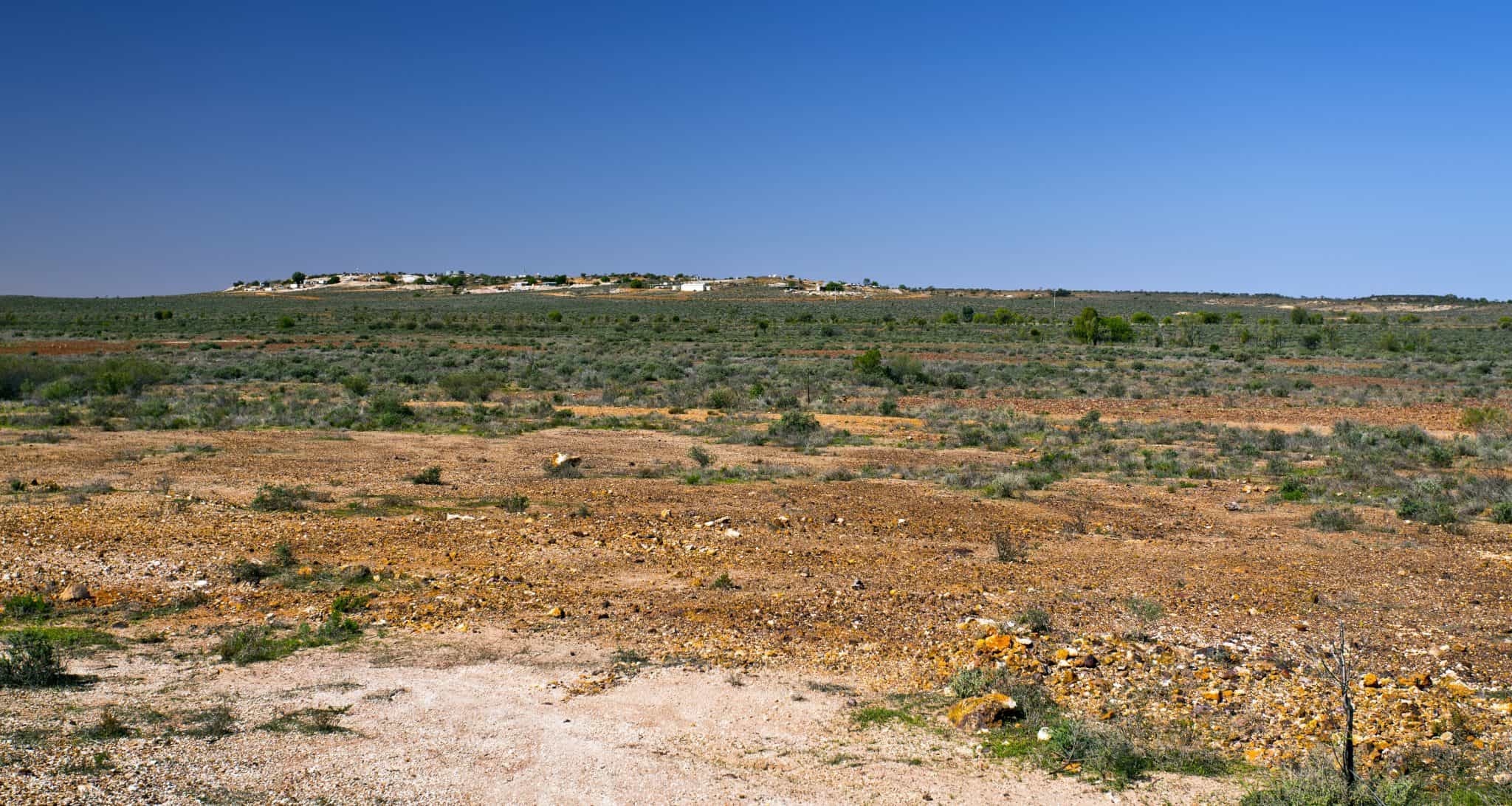 
Famous White Cliffs, home to the first commercial opal field in Australia, is a small town in Outback NSW, Australia. Located in the Central Darling Shire, it is around 255km northeast of Broken Hill and 93 km north of Wilcannia. Since mining began here in the late 1880s, thousands have flocked to the remote town to find their fortune. Today visitors can enjoy the views of striking desert landscapes, colonial architecture, unique historical underground homes, and of course the glittering gems from the minefields displayed in the many shops and galleries around town.

The local Wandjiwalgu Aborigines had been moving through the White Cliffs area for around 40,000 years prior to the arrival of the Europeans. However, due to the heat and unpleasantness of the desert they never settled in White Cliffs permanently, only visiting the area as they travelled to and from the Darling River.

From the late 1880s the town of White Cliffs would gradually emerge though as miners started coming to the area. Although opals had been found there as early as 1884 there was no real interest until 1889. In that year a major draught struck the area and four kangaroo shooters were hired by the Momba Pastoral company to reduce numbers so that the sheep would have something left to heat.

Having chased a wounded kangaroo over some low stony hills, one of the shooters picked up some beautiful stones which appealed to him. Suspecting that they were valuable opals, the shooters then sent them off to Adelaide for valuation by the geologist Tullie Cornthwaite Wollaston.

Impressed with the samples, Wollaston immediately embarked on a journey to meet the shooters and visit the area where the rocks had been found. Upon his arrival he offered the shooters 140 pounds for the first sample, which they eagerly accepted not knowing Wollaston was ready to offer even more.

In March of the next year the first opal mining lease was taken out in the area, and Wollaston began promoting and supplying White Cliff’s opals in Europe and America.

Growth of the Town


In that same year, 1890, a settlement emerged of miners working in the area. It was aptly named White Cliffs derived from the surrounding countryside of white underlying sandstone outcrops along the escarpments of the hills. Following the miners, William Johnstone arrived in the settlement in 1892 and established the first general store and hotel.

But the real growth of the town did not occur until a year later in 1893 when the word spread about lucrative finds and an influx or miners were drawn to the area. The increase in population led to the development of the town’s infrastructure. A number of old buildings and relics of the town’s colourful past still remain including the Post Office, the old Police Station and the old church.

However, for the most part building materials were scarce and expensive. Consequently, by 1894 many miners chose to live underground converting their old shafts into homes. With the hills being solid sandstone rather than earth. the dugouts were in no danger of collapsing and the temperature was consistently cooler than the outside unbearable summer heat.

Still today a number of White Cliff’s residents live in around 140 beautiful underground homes, some of which can be visited and even stayed at overnight. The first historic dugouts can also be viewed from the Pioneer Cemetery.

Decline of the Opal Mines


In 1902 White Cliff peaked with opals worth as much as £140,000 extracted from the mines around the town, and its population rising to around 5,000 in the winter months. But, from 1903 and over the next 10 years, as the richer area of the field was mined out and the conditions became too harsh, the town began a slow decline.

World War One dealt a final blow to the town as in 1915 the miners were called to fight the Germans – the biggest buyers and dealers of opal at that time. The population of the town was reduced to an estimated 30 people and trade was halted.

As a result, the White Cliffs opal fields never really recovered and the town was reduced to the small settlement it is today. The permanent population remains 225 rising to about 500 in winter when today’s miners from the south seeking the remaining gems.

Despite the decline of the White Cliffs opal field, the town still had many attractions, most of which can be enjoyed on a walk along the heritage trail. A dozen durable information signs at key points along the walk enhance an appreciation of the town’s history.

Key town attractions include Australia’s first solar power station, the White Cliffs Solar Power Station, built in 1981; the Bill O’Reilly Oval, a red hard dusty oval named after one of cricket’s greatest spin bowlers born in White Cliffs in 1905; the Pioneer Children’s Cemetery (1890-92), a stark reminder of the harshness of the desert conditions; the historic dugouts; opalized fossils which can be viewed in the shops and galleries; opal mine tours; and much more!


You can visit White Cliffs as part of our small group Australia outback tour for senior and mature travellers to Broken Hill and back, as well as our escorted small group tour of Western New South Wales. Led by a tour guide chosen for their local knowledge, we move in small groups of limited to 12 people, a mix of couples and solo travellers, delving off the beaten track and journeying deep into the outback.

Odyssey Traveller has been serving global travellers since 1983 with educational tours of the history, culture, and architecture of our destinations. Tours are cost inclusive of all entrances, tipping and majority of meals.  For more information, click here, and head to this page to make a booking.

External articles to assist you on your visit to White Cliffs and Outback NSW:

Discover the the Brewarrina fish traps, Aboriginal art at Mt Grenfell and visit the opal fields of  White Cliffs. This small group also visits the World Heritage Site of Mungo man and lady stopping in Mungo National Park and other significant locations such as Broken Hill. 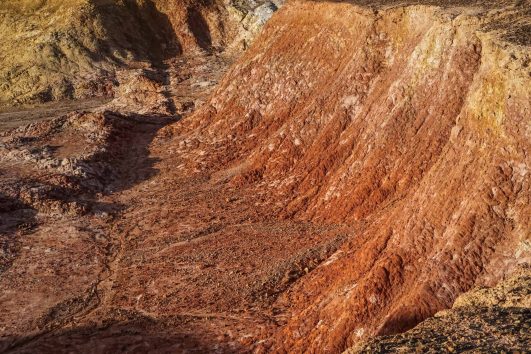 Ancient Aboriginal trade routes of Australia Trade was a central part of life for Aboriginal people prior to the British settlement of Australia. Trading routes criss-crossed the nation, dispersing goods, information, technologies and culture thousands… 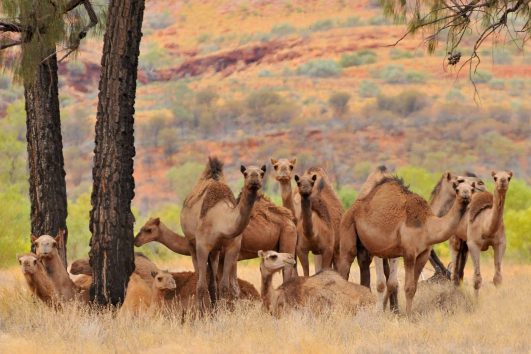 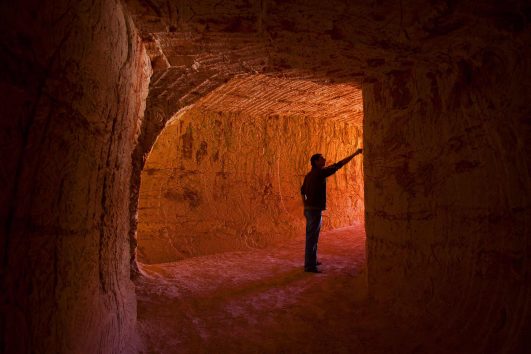 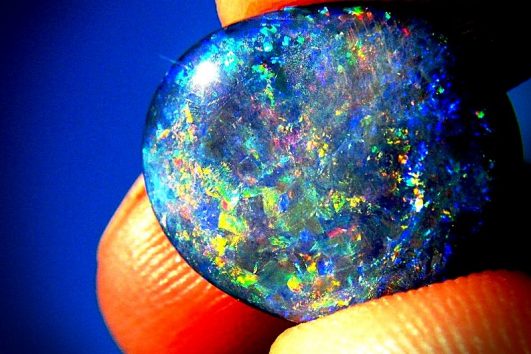 Lightning Ridge is synonymous with opal mining in Australia which we visit on this small group tour to Outback Queensland. While having a population of only 3,000, it attracts over 80,000 visitors each year to experience the fascinating town. A Glenn Murcutt designed  opal museum is scheduled to open in 2021. 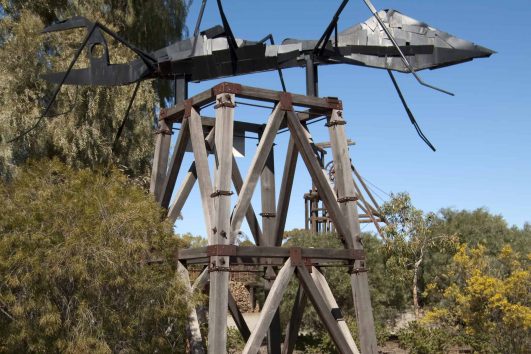 A group of self-taught artists from Broken Hill, Pro Hart and the 'Brushmen of the Bush' took the world by storm in the 1960s and 1970s. Escorted small group tours for active seniors who are couples or solo travellers. Explore and consider a range of tours in Australia and some of the best tours in New Zealand.