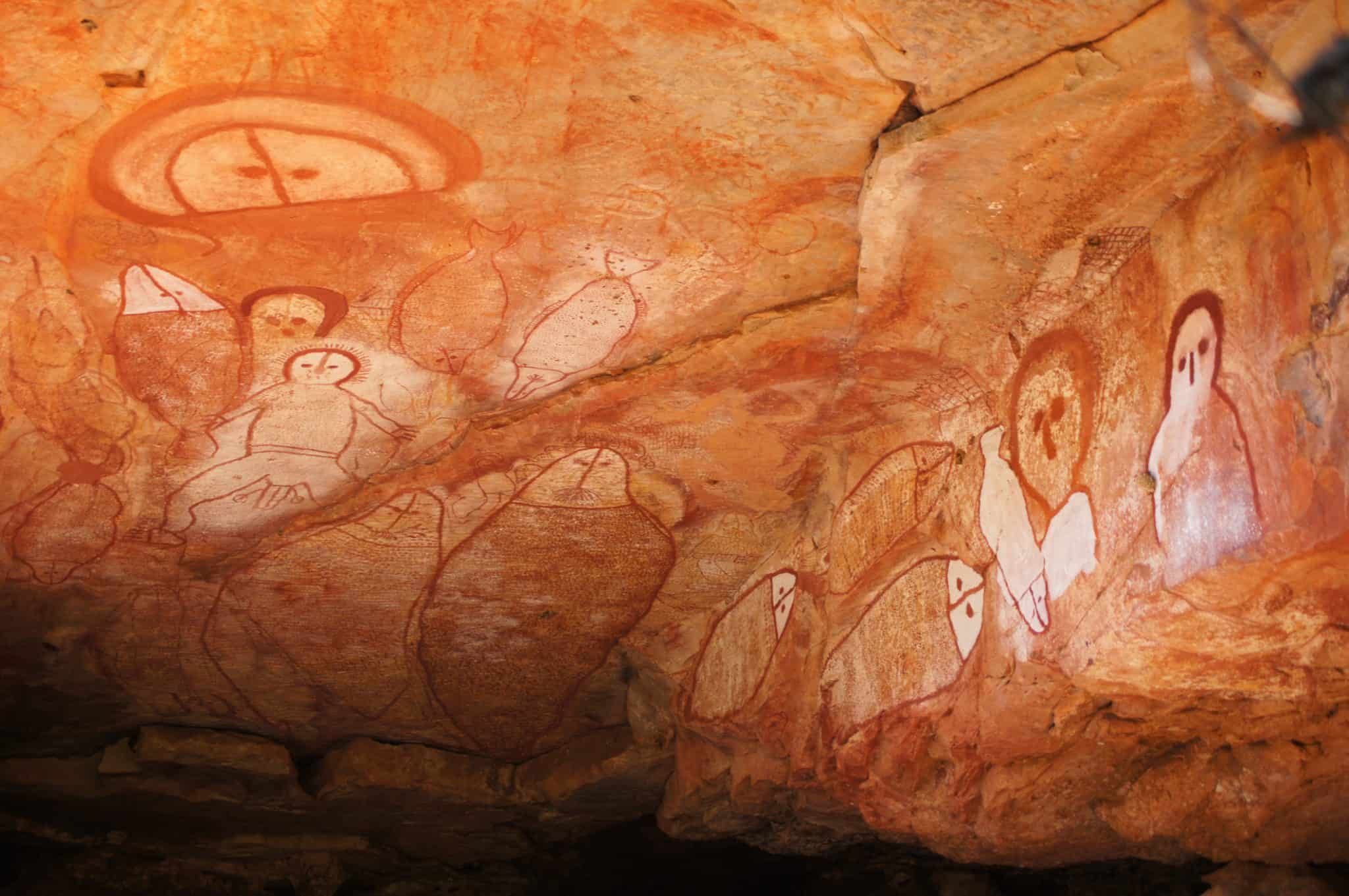 The fascinating Kimberley Region of Western Australia – over 400, 000 square kilometres of pristine wilderness spanning Australia’s north west from Broome to Darwin – is home to thousands of ancient rock art sites, believed to be the world’s oldest examples of rock art. Set amongst the stunning scenery of the Kimberley – river gorges, boab trees, sandstone formations, waterfalls and pristine beaches – these extraordinary paintings are a testament to an ancient civilisation that remains vital today, and are a must see on any tour of the Kimberley.

Yet despite the richness of Kimberley rock art, it remains poorly understood. Archaeologists have estimated that only 1 – 2% of rock art in the region has been recorded. The remainder is likely scattered across the innumerable caves and cliffs of Western Australia.

In 2016, the five-year Kimberley Visions project was launched, spearheaded by The Australian Research Council and the Kimberley Federation. Staffed by archaeology experts from around the world and representatives of local Aboriginal communities, the project aims to catalogue and better understand the extensive rock art of the Kimberley.

Already, researchers have discovered that – contrary to previous belief that the rock art was not 10, 000 years old – Aboriginal art in the Kimberley dates back more than 16, 000 years, making it the oldest rock art in the world. Confronted with the challenge of dating the art when uranium and carbon dating could not work, the researchers developed the ingenious strategy of dating an ancient wasp’s nest that had been built on the paintings. The wasp’s nest was 16, 000 years old, meaning that the art had to be even older.

The Kimberley is home to two major forms of rock art:

The Gwion Gwion rock paintings – formerly commonly known as the ‘Bradshaws’ – are the older of the two forms, believed to be among the oldest figurative paintings in the world. They display distinctive spindly stick figures, human figures ornamented with accessories such as bags, headdresses, and tassels.

The drawings first became known to Europeans in 1890 when the pastoralist Joseph Bradshaw (from which the term ‘Bradshaws’ comes) noticed an unusual type of rock art on a sandstone escarpment. A talented artist, Bradshaw was able to copy what he saw, and presented to the Victorian Geological Society on his findings.

There are likely more than 100, 000 Gwion Gwion paintings in the Kimberley Region. Today, the Ngarinyin people of the Kimberley are the custodians of the paintings. However, unlike the Wandjinas, which have a strong connection to living Aboriginal cultures, the origins of the Gwion Gwion remain shrouded in mystery. In 1992, Ngarinyin Elders revealed the connection between Gwion Gwion rock paintings and Wunan law of blood and land, as the paintings communicate legal, familial, and environmental responsibilities passed down through generations. However, like all indigenous paintings, the Gwion Gwion hide many layers of knowledge, meaning that much of their significance remains opaque to us.

The other major form of rock painting in the Kimberley are the Wandjina, which have strong spiritual significance to the local Mowanjum Aboriginal people. For the Mowanjum people, Wandjina is the supreme creator, and a symbol of fertility and rain. The first Wandjina are believed to have been painted 4000 years ago, and the figures continue to be painted today – making it the world’s oldest continuous sacred painting movement.

The Wandjina are depicted with huge eyes (like the eyes of a storm) but no mouth. It is said that this is because the presence of a mouth would make them too powerful. They are often depicted in elaborate headdresses, related to different kinds of storms.

Today, Wandjina continue to be painted by the artists of the Mowanjum Art and Culture Centre outside Derby. They have increasingly become a broader icon of Aboriginal Australia: in the 2000 Sydney Olympics a Wandjina painted by senior law man and artist Danny Woologoodja featured prominently in the Opening Ceremony; while a Wandjina was projected onto the sails of the Sydney Opera House as part of the 2016 Vivid Festival.

However, the entrance of the Wandjina into popular culture has also caused controversy. In 2007, a number of Wandjina were found graffitied across Perth, angering elders of the Mowanjum community. According to their tradition only certain members of the community are allowed to paint the Wandjina – and though the Perth artist remained anonymous, it is likely that he or she was not among this number. The controversy became the subject of a short documentary, Who Paintin’ Dis Wandjina?

How to see rock art in the Kimberley:

The Mitchell Plateau, in the north Kimberley, is home to examples of both the Gwion Gwion and Wandjina traditions. The Munurru art site features art of both forms, while further examples can be seen on the walk to Mitchell Falls.

Other significant sites are located along the Kimberley Coast, and on off-shore Timor Sea islands. Take a Kimberley cruise to visit sites, or join a guided tour from a coastal lodge.

Rock art can also be seen on numerous bush trails along the Gibb River Road, including the paths to Adcock Gorge, Manning Gorge, Galvans Gorge, and Tunnel Creek.

Odyssey Traveller visits significant sites of indigenous rock art on our Tour of the Kimberley. Known as the place where the ‘red dirt meets the sea’, the must-see Kimberley region melds the quintessential outback Australia of red sand and rock formations with a stunning Indian Ocean coast to rival the Great Barrier Reef.

Our outback tours begin in Broome, home to beautiful Cable Beach, Roebuck Bay and Gantheaume Point, before winding up the Kimberley Coast, through the Dampier Peninsula and Cape Leveque, Yampi Sound, and Cygnet Bay. We then head inland from the Indian Ocean on the Gibb River Road, stopping off at beautiful Bell Gorge and Windjana Gorge National Park, home to a significant population of freshwater crocodiles (also found in Lake Argyle, near the Northern Territory border). We make a day tour to remote Purnululu National Park in the East Kimberley, where we take a scenic flight over Bungle Bungle Range, Cathedral Gorge, Echidna Chasm, and Piccaninny Creek.

Our Kimberley tour also stops in at El Questro, a former cattle station converted into a wilderness park centred around Emma Gorge, Chamberlain Gorge, and the Pentecost River. El Questro offers a range of accommodations, from tented cabins by the gorge to luxury suites in the former El Questro station.

The Kimberley region is among the most isolated areas in the world. Apart from a small string of historic towns – Broome, Halls Creek, Kununurra, Fitzroy Crossing by the Fitzroy River, and Derby (home to the notorious Boab Prison Tree) – the land here is virtually untouched by human beings.

Odyssey Traveller has been serving world travellers since 1983. Like all our tours, our Kimberley outback tours come with a difference: an authentic and cuturally informed travel experience, that goes beyond the tourist sites in favour of drawing out the hidden histories of our destinations. Our guides are chosen for their local expertise, and we move in genuinely small groups: usually 6-12 per tour. Our tours are all-inclusive, encompassing accommodation, attraction entries, and transport. In a post covid-19 environment you can read our peace of mind statement.

If that sounds like you, why not join our tour of the Kimberley, or take a look at our other Australia and outback tours?