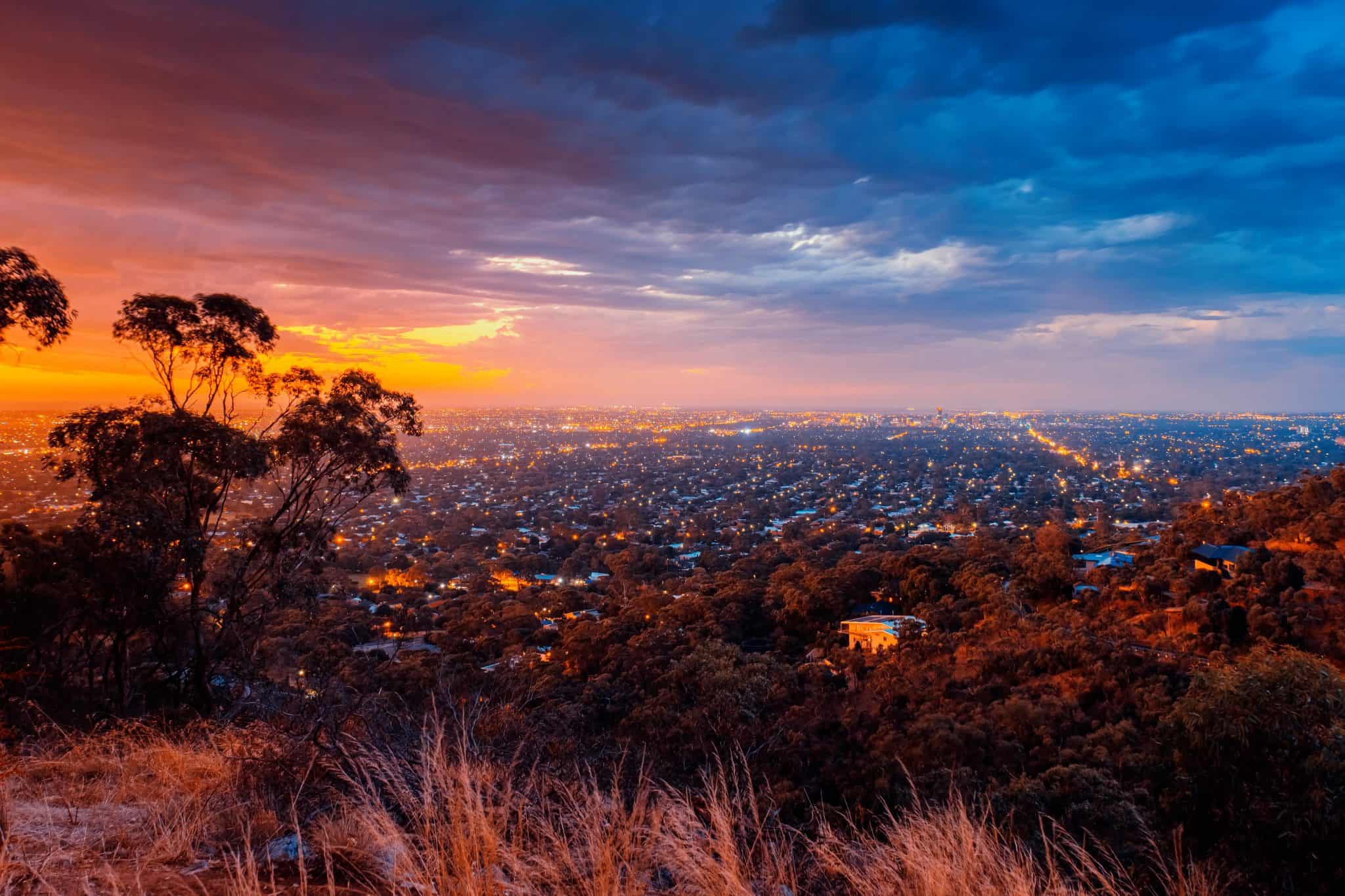 Australia’s fifth-biggest city and the capital of South Australia, Adelaide has a fascinating and distinctive history as the only Australian state without a convict past.

The traditional owners of the land where Adelaide is now situated are the Kaurna people, who called the area Tarntanyangga, meaning ‘place of the red kangaroo’.

The colony of South Australia was established as a British province in February 1836, with the offical Government of South Australia proclaimed on 28 December near the Old Gum Tree in the suburb of Glenelg north. The city of Adelaide was proclaimed on the last day of 1836, when the new colony’s Surveyor-General, Sir William Light, fixed its location at about 12km inland from the eastern shore of Gulf St. Vincent.

Light would go on to shape the new city. Unique among the early Australian cities, Adelaide is a planned city, with a grid designed by Light. Light’s plan provided for five squares in the central city, and a ring of parks surrounding it on all sides. His vision was inspired by Ancient Greek and Roman cities, as well as planned cities in the United States, particularly Philadelphia and Savannah, Georgia – which share with Adelaide the layout of a central city square, with four squares surrounding it and parklands then surrounding the city centre.

Though Adelaide has since suburbanised and expanded, Light’s forward-thinking plan has served the city well. Adelaide has had wide roads since its founding, an easily navigable plan, and plenty of green space in the city centre. Ring roads, inspired by the initial design, make it easy to get between suburbs without getting bogged down in traffic in the city centre.

Unlike the other Australian colonies, South Australia was established as a free – rather than convict – settlement. The plan for South Australia’s colonisation – often referred to as the ‘Wakefield plan’ – was developed by Edward Gibbon Wakefield while in prison for abducting a 15-year old heiress. Wakefield developed the theory of ‘sufficient price’, which claimed that the colonies had developed slowly thanks to government policy of giving away huge tracts of land in the extensive Australian hinterland. Because immigrants could become land-owners easily in Australia, the colonies had grave shortages of labour, which restricted development. The colonial capitalist also had to be the worker, and without leisure, civilisation had degraded: the ‘universal object; taste, science, manners, morals, abstract politics’ had been neglected. By selling land at a higher price, Wakefield claimed, the colonies would be able to create a supply of labour, thus enabling economic and urban development.

On his release from prison, Wakefield developed relationships with a number of British MPs. In the 1830s, he played a subterranean role in the formation of South Australia, setting up the South Australia Association in 1833, though he would subsequently disown it.

Over subsequent years, South Australia became something of an ‘experiment’, where ideas were tested that might remedy social ills in Britain. From the outset, the colony had no state religion, and strongly protected freedom of religion. It thus attracted refugees from around Europe, giving Adelaide the nickname ‘City of Churches’ for all the denominations represented.

In particular, Adelaide attracted an extensive German Lutheran community, many immigrating from Prussia in protest against Kaiser William III’s enforcement of a new state prayer book. In 1838, a group of Germans from Hesse, in the Rhineland, became South Australia’s first wine growers, paving the way for the world-famous wine regions of the Barossa Valley and Mcclaren Vale.

The period from 1850 to 1890 are known as the ‘boom and bust years’, as South Australia declined in the 1850s, before booming again in the 1860s, as rapid population expansion in Victoria created demand for South Australian wheat. However, like the rest of Australia, South Australia was affected by severe economic depression in the 1890s.

In the 20th century, Adelaide became an important centre of manufacturing, with the establishment of car-manufacturing factories by international companies General Motors (Holden) and Chrysler in the satellite city of Elizabeth. However, Adelaide grew slower than the cities on the east coast, and the city was overtaken by Brisbane in the early 1960s as Australia’s third biggest city.

Today, the Adelaide Festival of Arts – which has expanded to include the Adelaide Fringe Festival, the world music festival WOMAdelaide, and the Adelaide Writer’s Festival – is a major draw for international and interstate visitors to Adelaide. Locals have dubbed the period – which also includes the street motor race of the Adelaide 500 – ‘Mad March’ for the frenzy of cultural activities on offer.

Odyssey Traveller is excited to announce that we are now offering a tour of Adelaide. Basing ourselves in the city for eight nights, we explore Adelaide city and the surrounding areas in depth. On a walking tour of Adelaide city, we explore the grand 19th century buildings of the city centre, including Holy Trinity Church, Government House, and the Adelaide Gaol. In the city, our guided tour also explores the 19th century pubs and houses of Port Adelaide. We visit the Art Gallery of South Australia, on the city‘s North Terrace, home to the world’s second-biggest collection of works by William Morris, and visit the Botanic Garden. We will also have plenty of opportunity to feast on Adelaide’s famous food and wine, at the city‘s Central Market and Chinatown.

Our Adelaide tour also explores the surrounding regions. We make a day trip down the beautiful Fleurieu Peninsula, stopping for lunch and a tasting at the world-famous Mclaren Vale Wine Region, and drive to Cape Jervis, from which we can view Kangaroo Island. On another day, we take a cruise down the Murray River. Our tour also heads to the Adelaide Hills, touring the wineries of the Barossa Valley, and the traditional German settlement of Hahndorf, known for its traditional German architecture and food.

Odyssey Traveller has been designing tours for mature and senior travellers since 1983. We pride ourselves on offering an authentic experience of the places we visit, with Odyssey tour guide chosen for their extensive local knowledge. We move in small groups of around 6-12 like-minded people. Our tour price includes accommodation, entrance to attractions, group meals and more. For more information on us, click here.