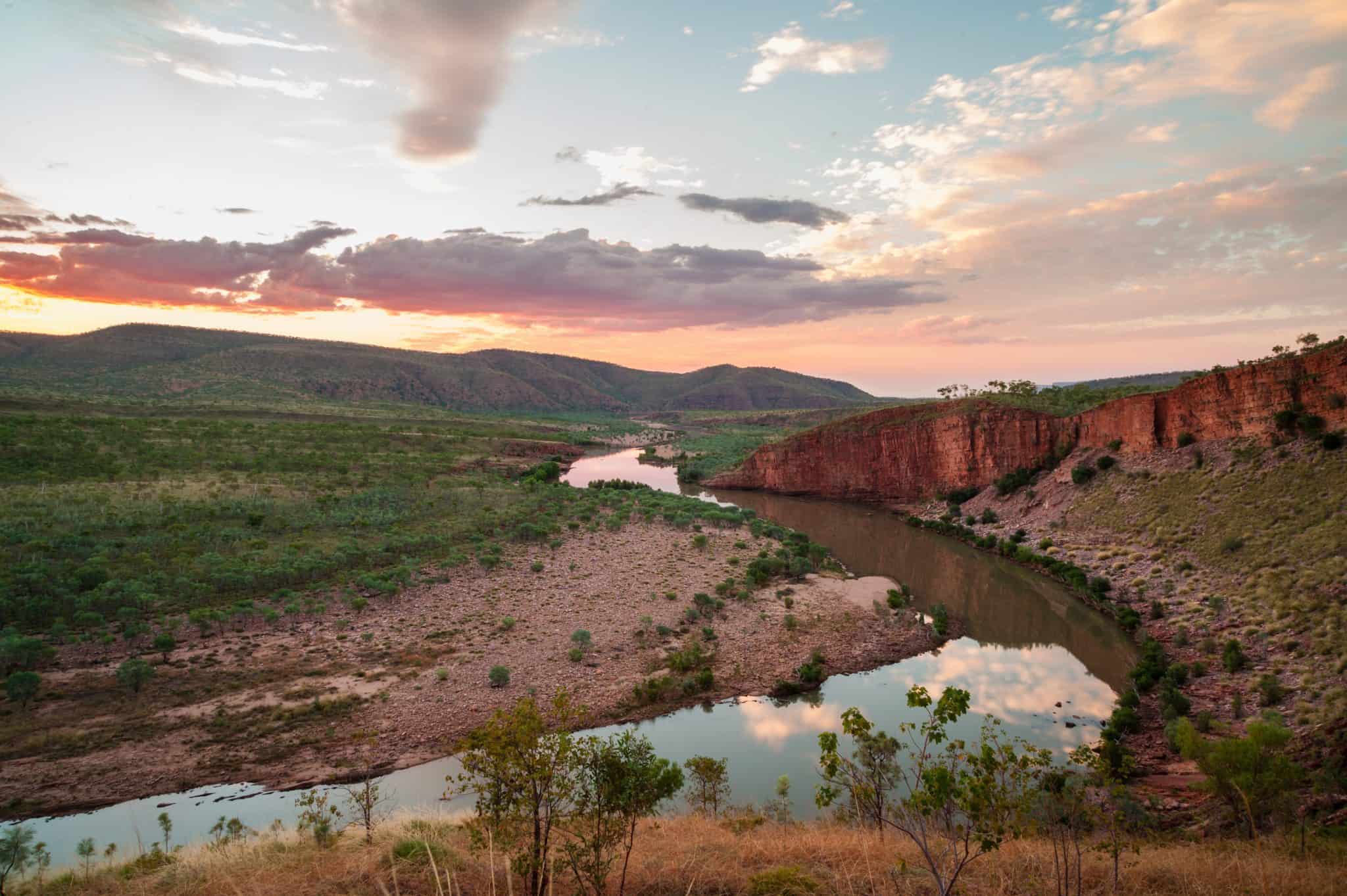 In few places is the difference between wet and dry seasons as distinct as in the remote Kimberley Region of Western Australia, over four hundred thousand square kilometres of pristine and remote landscape spanning Australia‘s northwest. While the dry season offers a desert landscape of red dirt and boab trees, the wet season brings river gorges overflowing with water, lush vistas as the landscape explodes with flora and fauna, and the appearance of rock pools and waterfalls in once dry creek beds.

While most Kimberley outback tours leave in the dry season rather than the humid and rainy wet, different points in the year offer wildly different experiences. The Kimberley is a region to be revisited, to see how the variance of the season transforms familiar locations such as El Questro, Purnululu National Park, and Mitchell Falls. In the dry, enjoy the red dirt and open blue skies on the Gibb River Road or the beaches of Broome and the Dampier Peninsula, while in the wet season, marvel at how the region’s many gorges and rivers – Emma Gorge, Geikie Gorge and the Fitzroy River – look when flowing with fresh water.

Like all of tropical Australia, the Kimberley’s climate is traditionally defined has having a wet season (which extends from October to April) and a cooler dry (from May to September). But the simple division between wet and dry doesn’t do justice to the ever-shifting climates of Australia’s ‘top end’. The traditional owners of Kakadu in the Northern Territory, the Bininj-Mungguy, recognise six distinctive seasons, while locals in the Kimberley often divide their year into three seasons: the wet, the dry, and the uncomfortable ‘build-up’, the humid and hot months of October to December, as temperatures rise into the late 30s/early 40s and the landscape cries out for the catharsis of rain.

The landscapes diverge distinctly with the seasons. In the dry, the Kimberley offers quintessential outback scenery of red dirt and lands baked dry by the sun. Due to the cooler weather, the dry is the most popular time for tourists from the southern states of Australia.

Beginning in late December, the wet is recognised by locals as a time of renewal. Cascading rivers flow where parched creek beds once stood, rock pools fill with water (perfect for swimming), and gorges overflow. By April, the once parched landscape is covered with verdant green flora and fauna, contrasting vividly against the wide open skies.

The distinctions between wet and dry shaped the Kimberley’s history. For European explorers and settlers, the issue of whether they had arrived in wet or dry shaped their perspectives and approaches to the land. The French explorer Nicholas Baudin, who left many of the French place names along the Kimberley coast (including Cape Leveque and the Bonaparte Archipelago) declared that ‘the soil is naked’ and the land ‘sterile’. By contrast, Lieutenant George Grey – future governor of South Australia and New Zealand and the first European to see the Wandjinas – enthused about the area, declaring it to have the ‘best grazing land in Western Australia’. He had seen the region during the wet season. Following Grey, attempts were made to set up sheep stations in the area during the 1860s – but thanks to the brutal temperatures, infertile dry, and sudden floods of the wet – these settlements were miserable failures.

Odyssey Traveller will be offering our tour of the Kimberley in 2020 through the heart of the dry season, June to September, and will be resuming tours in April 2021. We have chosen our dry season tours to offer you the opportunity to tour in relatively pleasant weather – days reaching around 30 degrees, and nights getting down to around 16 degrees. April, at the end of the wet season, is warmer, but offers spectacular scenery, as waterfalls and gorges flow with water.

Odyssey Traveller’s outback small group package  tours are designed especially for mature and senior travellers who want an authentic experience of the fascinating Kimberley region. Our Kimberley tour begins and ends in the city of Broome, home to iconic Cable Beach, dinosaur remains at Gantheaume Point, a world-famous bird sanctuary at Roebuck Bay, and a fascinating history as a centre of pearling. From Broome, we head along the pristine Indian Ocean Kimberley coast and then turn along the Gibb River Road, making side trips to Windjana Gorge National Park and Tunnel Creek National Park, beautiful Bell Gorge (particularly verdant in the wet), and the easily accessible Galvans Gorge. We head onto the Mitchell Plateau – for many the last frontier of the Australian outback – to admire ancient Aboriginal rock art and the vast Mitchell Falls.

Back on the Gibb River trail, we spend the night at El Questro, near the Northern Territory border, a wilderness park based around Emma Gorge, Chamberlain Gorge, and the Pentecost River. El Questro offers a range of accommodation, from tented cabins to luxury suites in the old El Questro station. Leaving the North Kimberley, we pass Kununurra and Lake Argyle by and make a day tour to Purnululu National Park, where we see the Bungle Bungle range, Piccanniny Creek lookout, Echidna Chasm and Cathedral Gorge. Finally we return to Broome and the West Kimberley, passing through the historic towns of Halls Creek and Fitzroy Crossing.

Our tour of the Kimberley includes accommodation, attraction entrances, and travel by 4WD and scenic flight. We move in small groups – around 6 to 12 – led by experienced local guides. There are many different learning based small group package tours in Australia offered each year fro you to choose to join in with like minded people.