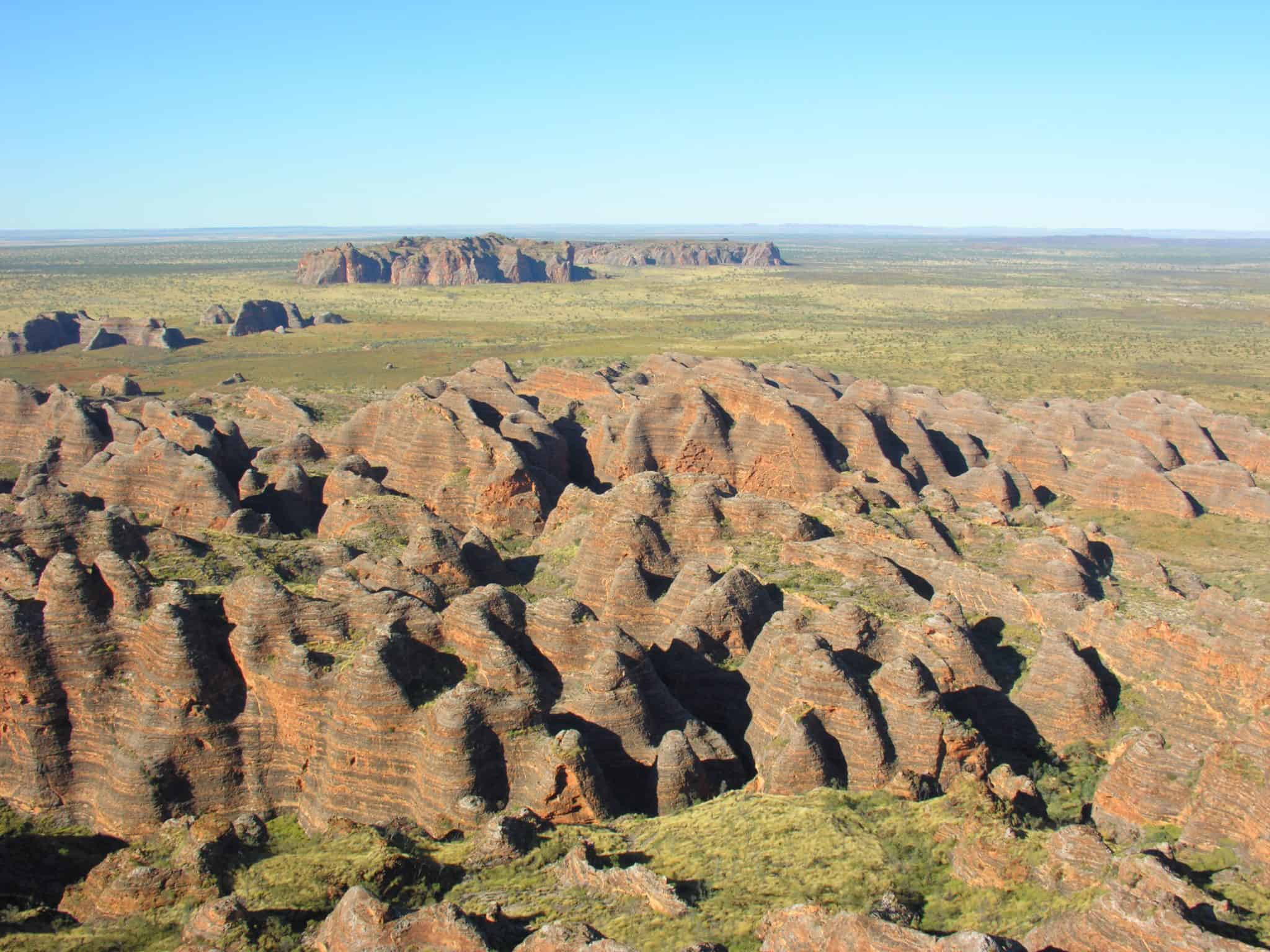 One of the highlights of any tour of the Kimberley, the 2400 square kilometre Purnululu National Park is home to the Bungle Bungle Range, the beehive domes of striped orange and grey sandstone tower rock formation have become icons of Western Australia with world heritage value.

The Western Australia‘s Kimberley region Kimberley region, spanning over 400, 000 square kilometres from Broome to Darwin, is one of the world’s last great untouched wildernesses, a spectacular landscape of sculptured rocks, river gorges, red dirt and looming mountains, virtually untouched by human hands. Purnululu National Park is remote even within the Kimberley, making it one of the most isolated places on earth.

The unique Bungle Bungle sandstone massif rises between 100 and 250 metres from the surrounding plains, 25 kilometres long and thirty kilometres wide. From the western side, it appears like a solid, vertical wall, broken in place by slot canyons, while from the east, it appears as a series of sandstone domes. Up close, the Bungle Bungles are a tangle of valleys and gorges, with the ground covered in streams and creek bed, dense vegetation, and sun-bleached rocks. Palm trees line the valley, and grow out of crannies high in the rock.

The Bungle Bungle range are the result of a unique geological process. On a Bungle bungle guided tour you will learn that around 400 million years ago, the east Kimberley was a mountain range, slowly eroded by streams carrying debris down into the Hardman Basin. Over the next 20 million years, the basin filled with sediment and the grains of sand developed a layer of quartz, binding them to one another to form devonian sandstone. Much more recently – over the past 20 million years – water began to seep through the rock, dissolving the quartz and causing the sandstone layer to break up. Streams cut deep into the surface, forming the cone karst and sandstone tower structures we see today. Though there is little quartz left, the grains remain locked together, enabling the rock formation to support itself on steep faces.

Cyanobacteria or blue-green algae – single-celled organisms that are among the oldest lifeforms on earth – have wrapped around the orange sandstone, producing the distinctive dark-grey stripes. They grow on layers of sandstone in which the clay content and porosity trap sufficient water. Several metres high, yet only a few millimetres thick, the cyanobacteria help to protect the ancient sandstone towers. Orange stripes are created where iron oxide has leaked to the surface.

The Bungle Bungles have been further shaped by the formation of steep-sided gorges and seasonal streams and pools, many of which have formed the major tourist attractions in the park: Piccaninny Creek, the Echidna Chasm, and Cathedral Gorge, a major incision in the massif that reveals an 50 metre wide amphitheatre in the heart of the Bungle Bungles.

Aboriginal people of the Kija, Jaru, Miriwung and Malngin language groups have lived in the vicinity of the Bungle Bungles for over 20, 000 years, sheltering in caves during the Wet until the 1920s. By day, they gathered fruits and vegetables on the plains, and hunted kangaroos, emus, bandicoots, and wallabies. Wild honey was collected and mixed with eucalyptus bark to make pija, a sticky treat. 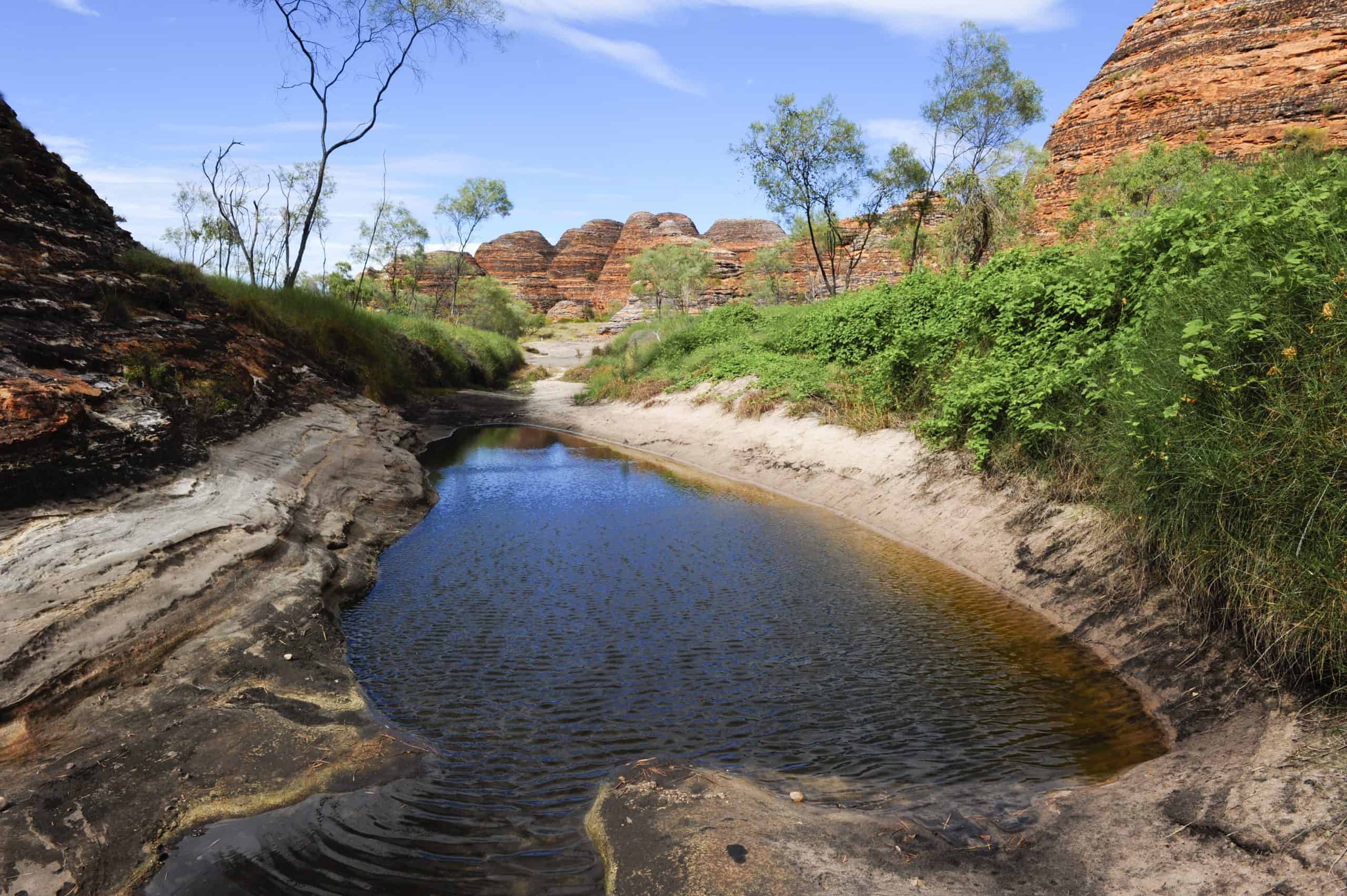 Aboriginal people likely lived in the Kimberley region for up to 50, 000 years. Sites on the Ord River and near Lake Argyle have been carbon dated at 21, 000 years old, while other Kimberley sites date back more than 24, 000. Given that the first peoples to Australia arrived from the north, it is likely that the Kimberley was settled much earlier, but due to its sandstone structure, ancient caves and rock paintings in the Bungle Bungles likely wore away. Nonetheless, more recent rock art and Aboriginal burial sites can be found, particularly on the western side of the ranges. Look out for a stenciled boomerang on the right-hand wall of the rock on your way to Cathedral Gorge, believed to be less than 100 years old.

Some suggest that the Bungle Bungles formed a part of the ancient border between the desert Jaru and the northern Kija people. Both groups lay claim to sites in the park, though relationships are complex and officially the Kija are the sole native title claimants, and play a key role in the conservation of the park.

The extreme remoteness of the sparsely populated Kimberley Region from the hubs of European settlement in Australia meant that the Bungle Bungles were unknown to most Australians. The first settler to view the structures was the explorer-surveyor Alexander Forrest, who was distinctly unimpressed, writing that ‘there was nothing promising, all rough and rangy’. Inspecting for grazing land, rock formations had little use to him.

This lack of interest continued. In the 1890s, the cattle thief and bushman successfully hid out in the Bungle Bungles for almost four years. The structure formed part of several cattle stations – including Bungle Bungle station, from which it gets its name – but owners took little notice, dismissing it as a ‘rubbish country’. With the damming of the Ord River in the 1960s, it was included in an area marked as a regeneration reserve, because of degradation due to overgrazing.

Legends slowly spread amongst stockmen of the ‘honeypot mountains’ of Western Australia. Yet the sandstone massif only became widely known in the 1980s, when director Guy Baskin and crew spied the striking rock formations from the air, while filming a documentary called Wonders of WA (Western Australia).

The ecology of the Bungle Bungles was so unique that even by 1989, many of the species found in the area had not been given scientific names. The plateau on top of the range is the only known location of a rare skink, Lorista bungle bungle, which has never been photographed.

Vegetation is slowly rejuvenating thanks to the removal of cattle: head right after the end of the wet in April to see red paperflowers, mauve mulla-mulla, green spinifex added to the vivid blue skies and orange rock. Purnululu National Park has the highest diversity of spinifex, at the point where desert plants meet northern ones. It provides a major food source for several species of native mice: desert mice, delicate mice, western chestnut mice, and the secretive Kimberley (or pebble-mound).

The name Bungle Bungle likely comes from a mispronunciation of a local grass, ‘bundle bundle’, while purnululu means ‘sandstone’ in Kija.

In 2003, Purnululu National Park received UNESCO World Heritage status for its exceptional geological qualities. The organisation described the Bungle Bungles as ‘by far, the most outstanding example of cone karst in sandstones anywhere in the world.’ They are of great scientific importance in indicating the process of cone karst formation on sandstone, a phenomenon only recognised by geomorphologists recently and still not entirely understood.

The flipside of the wonderful remoteness of Purnululu is that it is extremely hard for most visitors to get to the park. The two nearest towns are Halls Creek (100 kilometres away) and Kununurra (250 kilometres away). It is possible to fly to Kununurra from Broome, Darwin and Perth, and to fly to Halls Creek from Broome via the small town of Fitzroy Crossing on the Fitzroy River. Many visitors choose to drive from Broome, a trip that takes over 10 hours on the Great Northern Highway. Another option is to take a detour along the Gibb River Road, a scenic 4wd-only route that offers side-trips to striking Bell Gorge, Windjana Gorge, Tunnel Creek, Galvans Gorge, and El Questro Wilderness Park.

Even within the park, distances prove challenging. While there are trails available, many visitors choose to see the Bungle Bungles on a scenic flight.

Odyssey Traveller makes a day tour of Purnululu National Park as part of our Tour of the Kimberley. Beginning and ending our trip in Broome, our Kimberley outback tours take you to the major sights: the freshwater crocodiles of Windjana Gorge, pretty Bell Gorge on the Gibb River trail, and Mitchell Falls on the remote Mitchell Plateau, one of Australia‘s most beautiful waterfalls. We spend a night in El Questro, a cattle station converted into a wilderness park centred around Emma Gorge, Chamberlain Gorge, and the Pentecost River. El Questro station offers accommodation ranging from tented cabins to luxury suites in the old homestead. Our tour also takes in the sights of the beautiful Kimberley Coast and Timor Sea: iconic Cable Beach, Roebuck Bay, Yampi Sound, the dinosaur remains at Gantheaume Point, the pristine Dampier Peninsula and Cape Leveque, and the tragic Boab Prison Tree near Derby in the West Kimberley, where local Aboriginal people were imprisoned in the 1890s.

Odyssey Traveller’s tour of the Kimberley is designed for active and mature travellers who seek an in-depth experience of their destination. Our tour of Australia‘s north west is led by expert tour guides, chosen for their local knowledge, and moves in genuinely small groups of between 6 and 12. Our tour price includes accommodation, the cost of attractions, and travel in a comfortable, air-conditioned 4WD.

There’s never been a better time to visit the Kimberley. Contact Odyssey for more information on our Kimberley tour, and here for more on our Australia and outback tours.

Articles about the Kimberley and Australia 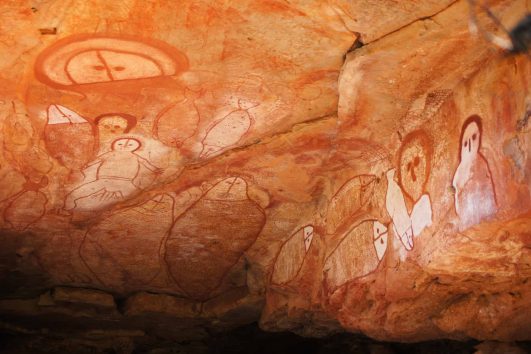 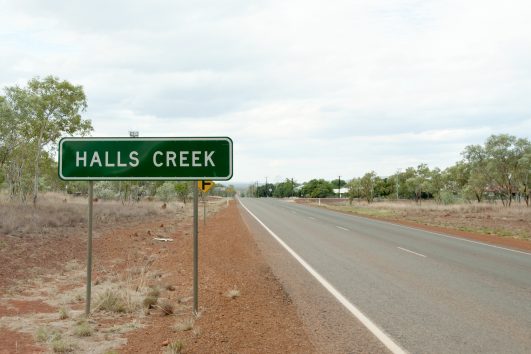 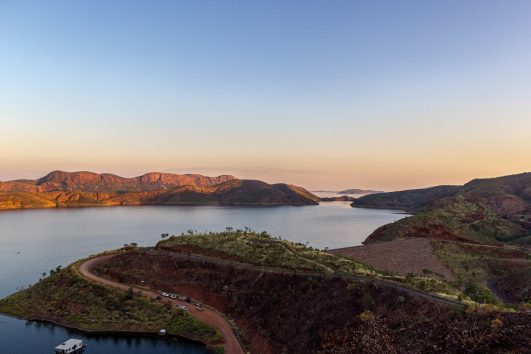 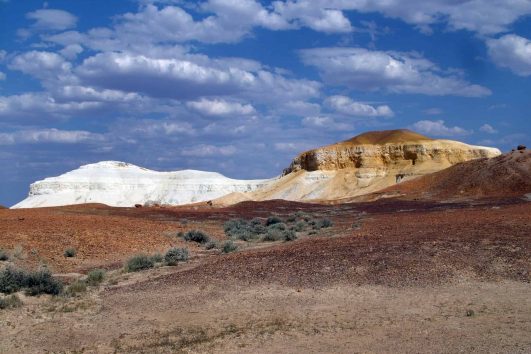 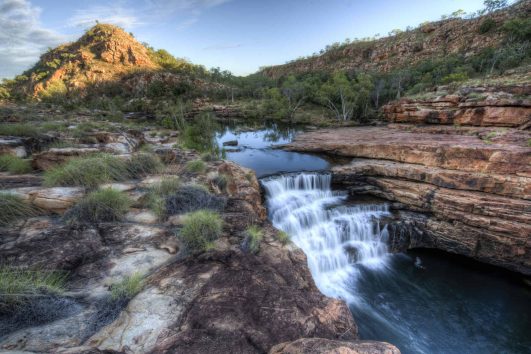