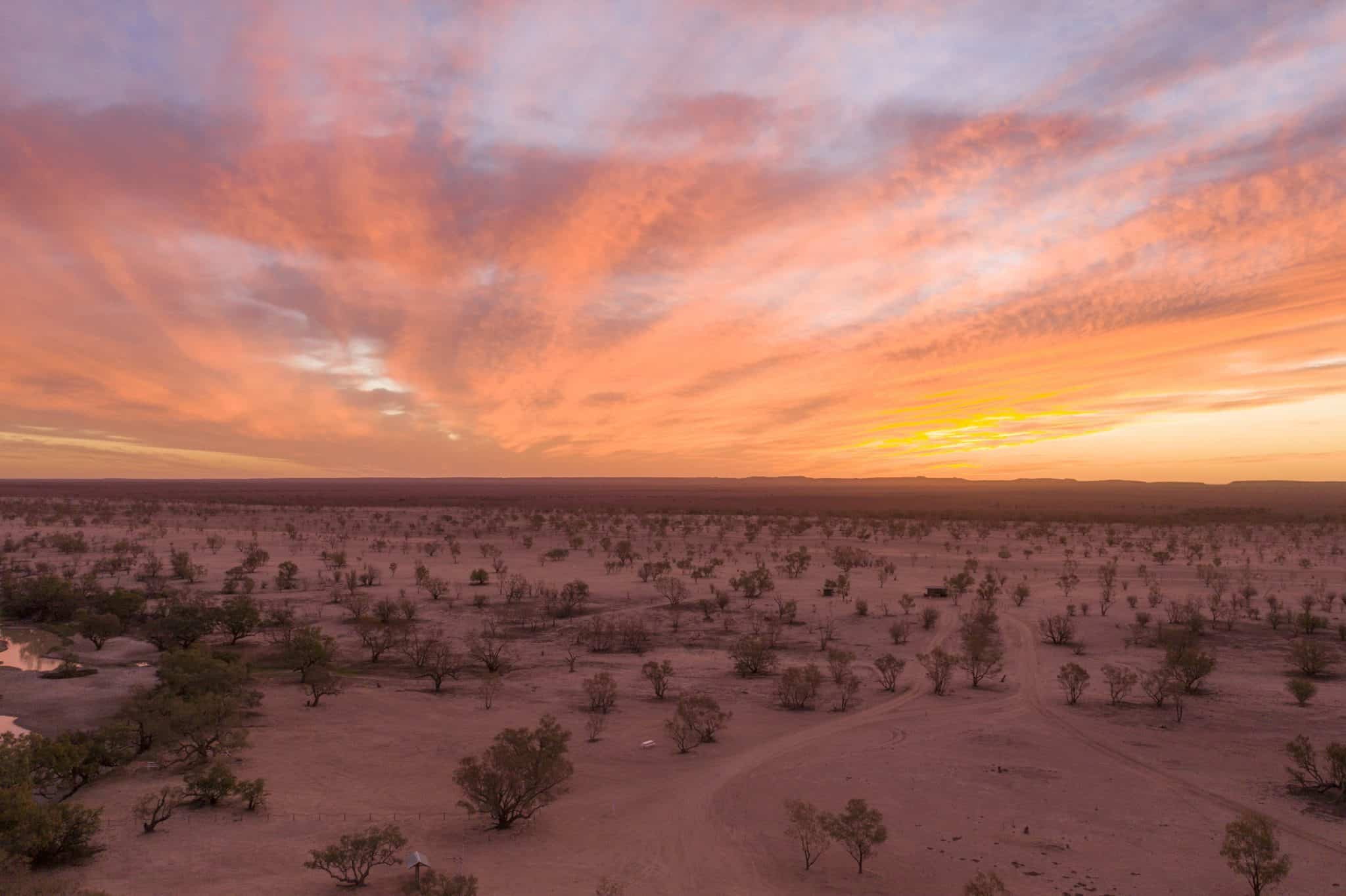 Today a small town in outback Queensland, Barcaldine (population: 1, 422) has played a big role in Australian history as the birthplace of the Australian trade union movement, and the Australian Labor Party.

Prior to European settlement, the area of Barcaldine was inhabited by the Innigai people, a language and culture group stretching across the Barcaldine and Longreach council areas.

The town received its name Barcaldine (pronounced Bar-call-din) after the Barcaldine Downs property, established in 1863 by Donald Charles Cameron. Cameron named his property after his family property in Ayrshire, Scotland, which was in turn named after Barcaldine, Argyll and Bute, Scotland. The town prospered as an important administrative centre for surrounding sheep stations, and an important stop on the railway linking it with Rockhampton. 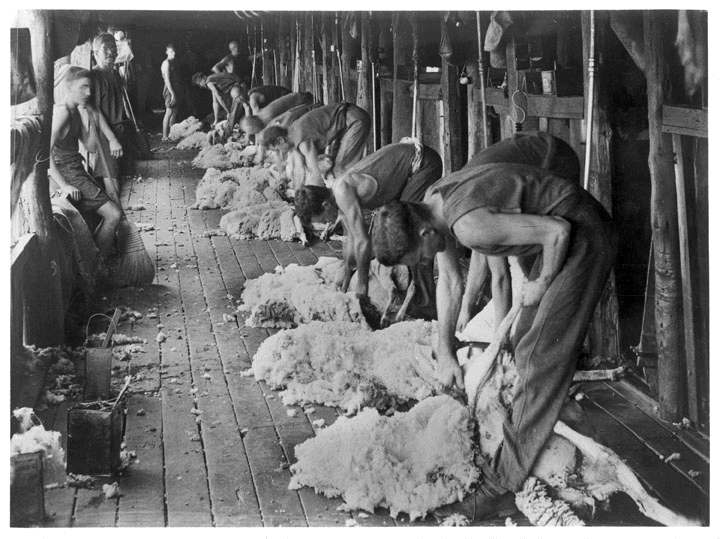 Shearing sheep in Barcaldine, 1948.Barcaldine’s claim to fame came during the 1891 Shearer’s Strike, which is today recognised as one of Australia’s first industrial disputes. In the late 19th century wool was one of Australia’s largest industries, but wages and conditions on the pastoral sheep stations remained poor for the majority of workers who were employed as shearers. At the same time, the expansion of the shearing industry meant that there were mass numbers of shearing workers across Australia, allowing them to form powerful, centralised unions.

In 1891, responding to the international depression that had reduced the price of wool, the graziers sought to reduce the shearer’s wages, which then stood at 1 pound per hundred sheep shorn. In response,  shearers across Outback Queensland went out on strike – a crippling blow to the industry.

In response to the strike, pastoralists introduced non-union ‘free labourers’ who received the protection of police and military. Strikers staged protests and public parades, and many were jailed.

Barcaldine, at the heart of the Mitchell district (the richest pastoral area in the country), became the centre of the strike. In March, 120 mounted infantry surrounded the union office and arrested the strike committee. The union leaders were charged with conspiracy and sedition and jailed for three years on the penal settlement of St. Helena Island, Moreton Bay, a move intended to break the strike.

The move succeeded. Dwindling funds meant that the strike was unsuccessful, despite the breadth of union support. However, the strike would have lasting ramifications. The defeat – helped in part by the successful arrest of strike leaders – led working people to believe that they needed their own representatives in parliament and government. Soon after, the Australian Labor Party was formed. T.J. Ryan, one of the strike leaders, was soon after elected to Queensland Parliament, the first representative of a union to be elected to parliament not just in Australia, but worldwide.

Barcaldine today has a number of interesting historical sites that commemorate the events of the 1891 strike, and the broader history of working people in Australia. The Tree of Knowledge, a ghost gum which the strike leaders met beneath, is seen as the origin point and spiritual heart of organised labour in Australia. In 2006, the tree was poisoned with a herbicide by an unknown culprit. In the aftermath, an architect-designed Tree of Knowledge memorial was constructed on the original spot, using the dead trunk of the original tree. The sculpture is a striking 18 metre-high cube, in which 4000 suspended timbers of varying lengths form the tree canopy. It now includes interpretive panels on the Shearer’s Strike, and the men who led it.

The Australian Worker’s Heritage Centre opened in 1991, and is the only museum devoted to labour history in Australia. It aims to explore “the lives and proud heritage of ordinary working people – telling the stories of the railway workers and blacksmiths, the farmers, nurses and teachers who shaped the nation.” Multimedia displays tell the story of the Shearer’s Strike, with other exhibits devoted to Australian women at work, postal workers, and the importance of Aboriginal stockmen. Several historic workplaces, including a Australian Workers Union Shearer’s Hall from Longreach, a one-room schoolhouse from Torrens Creek, a railway station and a police watchhouse have been relocated to the site.

The Barcaldine & District Folk Museum is an eclectic collection of over 8, 000 objects donated by locals, including barbed wire from the 1870s, a rare Edison gramophone, and a ticket issued by QANTAS in 1923.

Barcaldine has six historic buildings listed in the Queensland Heritage Register. The Barcaldine Shire Hall and St Peter’s Anglican Church are rare examples of public buildings in the classic Queenslander style of ‘tin and timber’. The eccentric Masonic Lodge was transported 500km across Queensland by a group of masons who were working on the railways, built and rebuilt six times as the railway moved across Queensland. Built of timber and corrugated iron, the facade nonetheless masquerades as a classical building of Greece or Rome, with horizontal wooden slats painted to mimic ashlar masonry.

Odyssey Traveller visits Barcaldine as part of our tour of Outback Queensland. Getting away from the tourist sites of your typical Queensland tour – Brisbane, Cairns, and the Daintree Rainforest – our trip takes you into the historic heart of Outback Queensland. Leaving from Dubbo, we head into the outback via the fascinating Brewarrina Fish Traps. In Outback Queensland, we visit the Australian Stockman’s Hall of Fame in Longreach, Central Queensland, and then view dinosaur remains at Winton‘s Australian Age of Dinosaurs Museum and the fascinating ‘dinosaur canyon‘ of Lark Quarry. In Winton, we also visit the North Gregory Hotel, which saw the first performance of Waltzing Matilda in 1895.

Rather than heading to Far North Queensland, Cape York, and Mount Isa, our outback Queensland road trip makes a turn at the quintessential outback town of Hughenden, with a day tour to the sandstone formations of Porcupine National Park. We head back via Barcaldine to Canarvon Gorge National Park, a lush rainforest gorge in the midst of the arid Queensland outback. Finally, we stop in at the famous opal-mining town of Lightning Ridge, NSW, before our outback adventure comes to an end in Dubbo.

If you’re interested in exploring Queensland’s outback, why not join an Odyssey Tour? Designed for mature and senior travellers, our tours aim to get you off the beaten path. We move in small groups of around 6-12, and are led by a tour guide chosen for their local knowledge. Click here for more information, and here for more information on our other Australian outback tours.