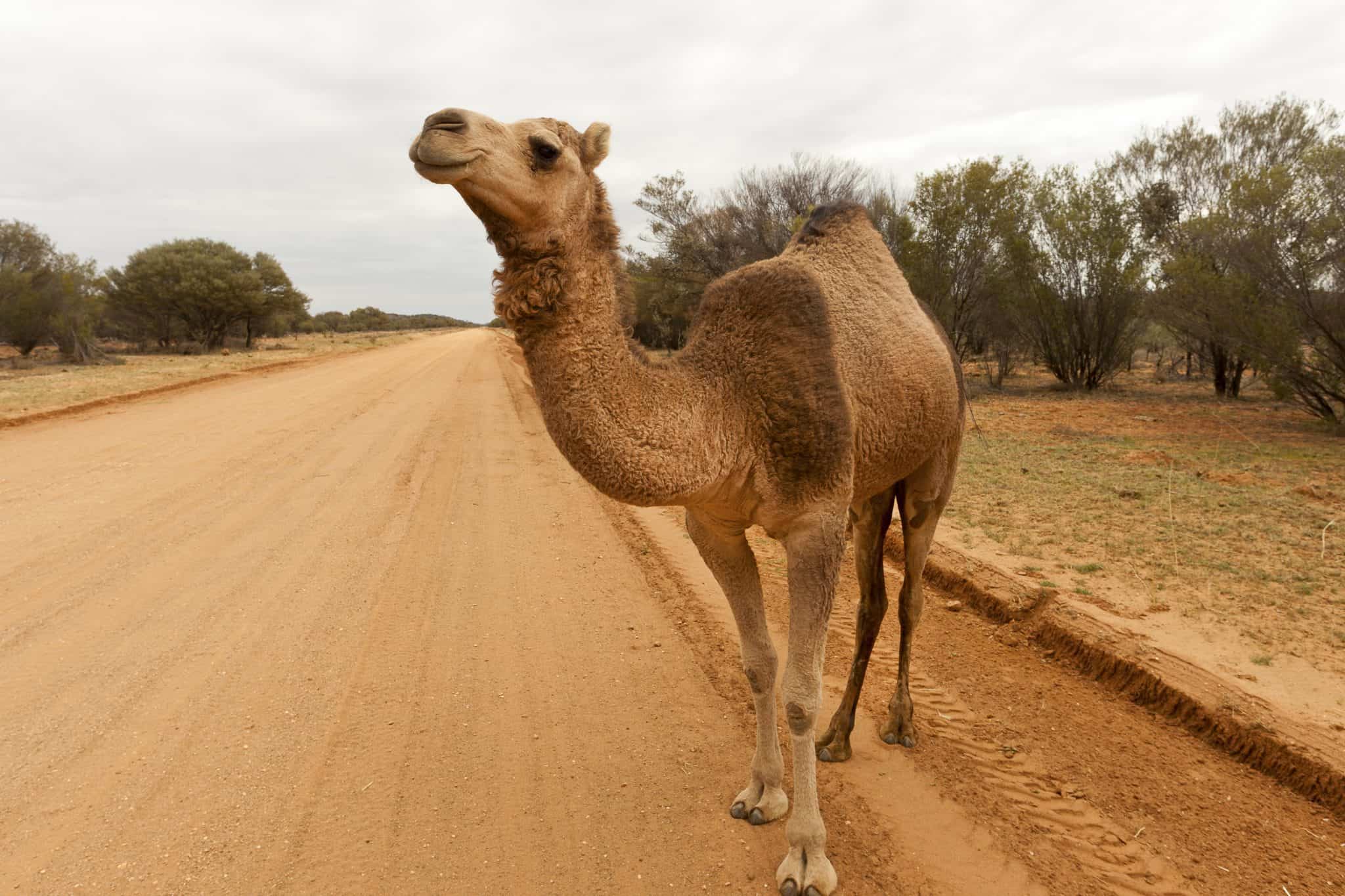 Here’s a trivia question: where are the world’s only wild single-hump camels found? If you guessed Arabia or the Sahara, you’d be wrong. In fact, the answer is the deserts of central Australia, where their imported ancestors were freed after playing a key role in the settlement of the Australian outback.

The use of the camel to tame the desert likely dates back over 4500 years, when the first camels were tamed on the Arabian Peninsula, before spreading across the Middle East and Asia over subsequent millennia.

For nomadic peoples of Middle Eastern and Asian deserts, camels are at the heart of life. Camel milk is a chief source of nutrition; camel hides make tents and leather goods; hair is woven into rugs and fine fabrics. The meat of camel is commonly eaten at feasts and festivities.

Today, out of the world’s 13 million camels, only 600, 000 still live on the Arabian peninsula. Over 11 million live elsewhere in the Middle East and Africa, nearly half of these in Somalia and Sudan. 100, 000 camels live in Australia today, many of them feral, as wild camels, an introduced species, are properly called.

Incredibly, the Eurasian population of camels is entirely in human hands, making it impossible to tell how camels lived prior to domestication. For the Conservation Commission of Australia’s Northern Territory, the behaviour of Australia’s feral camels is of major interest as a means to understand how camels behave in the wild, and to explore their impact on the surrounding environment.

The first camel to arrive in Australia reached Port Adelaide in 1840, the sole survivor of a group shipped from the Canary Islands, off north-west Africa. Inspired by their use in the Middle East and North Africa, the camel seemed the ideal for opening up huge swathes of arid Australian land.

At first, the camels received mixed reviews. Their first major test was the expedition of Burke and Wills, who brought 26 camels, 23 horses and six wagons of provisions on their lavishly funded quest to reach the north of Australia. Soon finding all the wagons and supplies to be a burden, Burke and Wills left them with their men, pressing ahead into the Australian outback – where they soon met with disaster.

However, the camels would prove more successful on subsequent exploration journeys, including those of Ernest Giles, Peter Warburton, William Gosse and Harold Lasseter.

Soon, camels became a familiar sight across Australia. In total, more than 10, 000 camels were imported to Australia in the late 19th century. Guided by cameleers from the Middle East and Asia, they brought goods from the cities to remote pastoral stations, helped build the Overland Telegraph Line along an ancient Aboriginal trading route, played a key role in creation of the Canning Stock Route, and in laying out the Trans-Australia and Central Australian railway lines.

The camel is ideally adapted for desert survival. The hump, once thought to be a water store, is a well-placed fat reserve that allows the camel to regulate body temperature. Because fat is concentrated in one spot excess heat can be dissipated through a thin layer of skin elsewhere. The hump also shields the body from the impact of the sun.

Camels can deal with dehydration exceptionally well, losing up to 40% of their body weight without excessive thickening of the blood. In extreme conditions, they can survive 20 days without water.

Australia’s camels were operated and trained by men from India, Iran, Turkey, the Middle East and North Africa, collectively known as ‘Afghans’ or the ‘Ghans’. From 1870 to 1900, it is estimated that over 2000 cameleers came to Australia. As historian Anna Kenny argues, the ‘Afghan’ cameleers played a vital role in constructing modern Australia:

“The cameleers opened lines of supply, transport and communication between isolated settlements, making the economic development of arid Australia possible. They also enriched the cultural landscape.”

Despite this, life in Australia was often hard and unwelcoming for the cameleers. Usually young or middle-aged men, many left wives and children behind on three-year contracts. They rarely found acceptance from Australia’s settler communities. Many towns – such as Marree and Farina – were divided into segregated quarters for whites, Aboriginals, and ‘Afghans’. Camelmen often found more acceptance among Aboriginal communities, with some men marrying Aboriginal women and starting families.

Though the ‘Afghans’ were from a variety of different countries and spoke an array of languages, they were generally united by their Muslim faith. Islam became a source of solace and a means of building community. Mosques dot the Australian interior, including Australia’s first mosque at Marree, built 1861, and the 1891 Broken Hill mosque.

However, the story of the camelmen should not only be understood as one of marginalisation. Camelmen lead one of Australia’s first successful strikes, on Beltana Station, South Australia, in 1870. By the end of the 19th century, Australia’s camel industry was controlled by the ‘Afghan’ cameleers, with business-owners such as Abdul Wade and Gunny Khan becoming wealthy as a result.

By the 1920s, the motorcar brought the heyday of the camel to an end. Animals that (in today’s terms) sold for thousands of dollars were now worthless. Unwanted, they were released into the desert, where they became feral.

Today, many regard Australia’s camels as pests, who break the pipes and fences of outback communities, and strip the traditional feeding grounds of native animals. For others, the camels are once again a business opportunity. In 1994, camel tourism was an industry worth $2.5 million in the Northern Territory alone. Other camels are sold to the United States, for use in their deserts, while camel farms in Queensland produce dairy goods using camel milk, from feta cheese to salted-caramel gelato.

Whatever your perspective, Australia’s camels are a palpable legacy of the fascinating and diverse histories of the ‘red centre’.

Odyssey Traveller is now offering a number of tours of the Outback. Designed for curious mature-aged and senior travellers, our tours go beyond the cliches, to tell the fascinating and multi-layered history of inland Australia.

Every Odyssey Tour is led by an experienced travel director; and is joined by a knowledgeable tour guide in most destinations. We move in small groups of around 6-12 travellers. The tour price includes transport in a comfortable vehicle suited for our terrain, accommodation, entrance fees for attractions, and several group dinners.