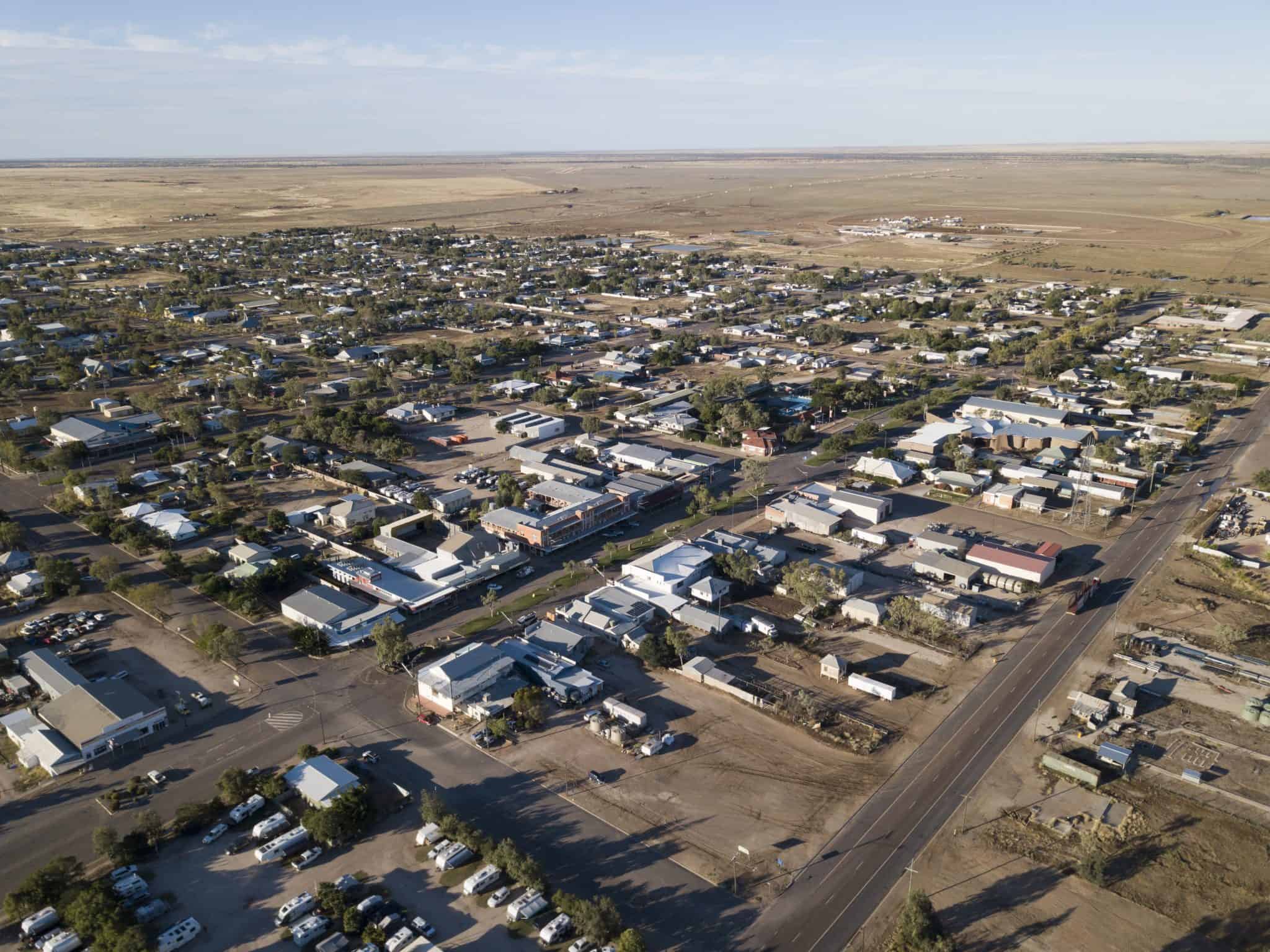 Winton, in Central Queensland, has several claims to fame: it was the place where ‘Waltzing Matilda’, ‘the unofficial national anthem‘ was written; it was closely associated with the creation of QANTAS; and it is now regarded as the ‘Australian capital of dinosaurs’ after a number of fascinating paleontological finds.

The Winton shire covers 53, 935 square kilometres and is home to only 1, 600 people. It is the heart of Channel Country, a mostly grassy, semi-arid area, used to raise cattle and sheep.

The town was originally called Pelican Waterhole, but according to legend, the local postmaster Robert Allen got tired of writing the lengthy name on documents, so renamed the town after Winton, the suburb of Bournemouth where he grew up. The name ‘Winton’ was formally gazetted in 1879.

The origins of Banjo Paterson’s ‘Waltzing Matilda’ remain shrouded in mystery. Paterson wrote the lyrics while staying at Dagworth Station, a sheep and cattle station near Winton, in August 1895. The melody of the song was derived from a tune written by Christina MacPherson, the daughter of the station owners, and played on the zither or autoharp.

The story of the ‘swagman’ (or itinerant worker) at the heart of the song likely comes from a report in the Brisbane Courier, which claimed that a man named Hoffman, a prominent unionist involved in the 1891 Shearer’s Strike, had committed suicide rather than be apprehended by police. Hoffman became Paterson’s swagman, who threw himself into the billabong rather than be arrested by ‘troopers.’

The song was first publicly performed at Winton’s North Gregory Hotel in 1895. The North Gregory Hotel – rebuilt in its current elegant Art Deco form in the interwar period – remains open today. Head to the Daphne Mayo dining room – named because it is decorated with etchings by Mayo – to see interesting historic photographs.

The history of ‘Waltzing Matilda’ is commemorated at the Waltzing Matilda Museum, the world’s only museum devoted entirely to one song. The original museum, built in 1998, burnt down in 2015, with a rebuilt museum opening in early 2020. Exhibits tell the story of Patterson and the writing of the song, while other displays explore the 1891 Shearer’s Strike and the history of QANTAS in Winton.

Winton also played an important role in the formation of QANTAS, the oldest airline in the English-speaking world, and the second-oldest still operating today. In November 1920, The Queensland and Northern Territory Air Service was registered as a company with its headquarters in Winton; the first board meeting would occur soon afterwards, on 10 February 1921, at the Winton Club. The Club remains open to guests today, with a dining room packed full of interesting memorabilia from the early days of QANTAS.

Winton is also regarded as the Australian capital of dinosaurs, thanks to a number of fascinating paleontological finds in what is known as the ‘Dinosaur Triangle’. Streching from Boulia in the west to Chillagoe in the north and Roma in the south, this area is where nearly all of Queensland’s many dinosaur fossils have been found.

In 1999, while mustering sheep on his property near Winton, David Elliot discovered what turned out to be a fossilised dinosaur bone. Further digging uncovered hundreds of pieces of dinosaur skeleton, including part of the femur (thighbone), several vertebrae, and portions of rigs.

Palaeontologists brought to the site from the Queensland Museum revealed that the massive bones were part of a sauropod, enormous herbivores characterised by long necks and tails. The largest sauropods are the largest animals to have walked the earth. This sauropod – named Elliot – was huge, likely measuring 16 to 21 metres long, and weighing at least 30 tonnes. Most likely part of the Austrosaurus species of sauropod, Elliot was the biggest dinosaur found in Australia up to that point.

In 2002, Elliot and his wife, Judy, called a public meeting with an eye to establishing a museum devoted to Winton’s dinosaurs. The proposed museum became the Australian Age of Dinosaurs. Located 25 km south of Winton, the Australian Age of Dinosaurs is located on a dramatic mesa with sweeping views of the surrounding plains. Tours here are a totally immersive experience, including a visit to the fossil preparation laboratories where palaeontologists carefully expose the fossilised bones; a talk in the collection rooms where famous dinosaur skeletons are explained by a well-informed guide; and a visit to the Dinosaur Canyon, a dinosaur dig where bones are now being found. The centre is the largest collection of dinosaur bones in Australia, and the most productive fossil preparation laboratory in the Southern Hemisphere.

Elliot was not the first dinosaur fossil found in the Winton area. In 1989, Rob and Ian Ievers, owners of the Marathon Station, found the remnants of a 5 metre marine reptile from the Cretaceous period, and fossils of Minmi, a 2.5 metre armoured dinosaur unique to Australia.

Since the discovery of Elliot, dinosaur mania has overcome the farmers of the Winton area. In 2005, two dinosaur skeletons, a sauropod and a theropod, were found on Elderslie Station near Winton, while sauropod footprints were found on Karoola Station by the Elliots’ son, Mike.

Wayne Rhodes, the owner of Sandhills, a property near Richmond (north of Winton), discovered a previously unknown and long extinct species of fish in 2004, now bearing the scientific name of ‘Boofhead’. The following year saw the discovery of an ancient crocodile skeleton, showing that the evolution of modern crocodiles began in Australia during the Cretaceous period, a diminutive creature that lived in the shadows of giant sauropods.

The richness of the paleontological finds near Winton is thanks to the changing geology of the region. 90 million years ago, Australia had detached from Antarctica, and was travelling north to the Equator. Unlike the arid/semi-arid region of today, outback Queensland was home to lush, green floodplains. Lakes were filled with freshwater mussels, lungfish and crocodiles, while the surrounding lands were covered in open forests and ferns that attracted herbivorous dinosaurs. These in turn attracted carnivores, leading to a substantial dinosaur population.

Nearly all of the fossils come from a 400 metre thick ancient sedementary layer known as the Winton Formation. Bedrock is covered in 1-2 metres of heavy clay soil, which expands and contracts in response to periods of wet and dry, moving nodules of bedrock containing bones, sometimes appearing on the surface.

The other major dinosaur draw in Winton is the incredible Lark Quarry Conservation Park. 110 kilometres away from Winton, Lark Quarry is the largest collection of running dinosaur footprints collected anywhere in the world. The site tells a fascinating story from the ancient past. A number of dinosaur species were congregating around grasslands and drinking from a stream or lake, including Coelurosaurs, a carnivorous species not much larger than a chicken that ate insects, frogs, and lizards, and Ornithopods, herbivorous dinosaurs roughly the size of a modern-day emus. Into this peaceful scene stormed a single Theropod predator, a Tyrannosauropus, about 8-9 metres long. The Coelurosaurs and Ornithopods fled, leading to a stampede.

Scientists remain unsure whether the Tyrannosauropus managed to grab any of the fleeing dinosaurs, but the stampede has been vividly preserved in the sedimentary layers known as the Winton formation. A fourth set of prints might belong to one of Australia’s most famous dinosaurs, the 4-m long Muttaburrasaurus

The site was uncovered in the 1960s by a local station manager, Glen Seymour, and excavated in the 1970s. Today, it is protected from the harsh Queensland sun by a Conservation Building.

Odyssey Traveller visits Winton as part of our tour of Outback Queensland. By-passing the tourist spots of your average Queensland tour – Brisbane, Cairns, the Daintree Rainforest – our tour takes you deep into the outback. Our tour begins in Dubbo, NSW, before heading deep into Queensland’s outback, where we visit the Australian Stockman’s Hall in Longreach, see dinosaur remains on a day tour from Hughenden, and learn about the birth of the Australian labour movement at Barcaldine. Rather than head north to Mount Isa and Cape York, our tour turns south, heading back through Canarvon Gorge National Park, a lush rainforest gorge in the midst of the arid Australian outback, home to extraordinary Aboriginal art. Our Outback Queensland Road Trip then visits the opal-mining town of Lightning Ridge, NSW, before ending in Dubbo.

Odyssey Traveller has been serving mature and senior travellers since 1983. Our tours are designed for travellers who want an authentic experience of their destination, delving into the history, culture and sense of place. We move in small groups of 6-12 like-minded people, and our tour price includes accommodation, entrance to attractions, and transport in a comfortable, air-conditioned coach. If that appeals to you, click here for more information on our Queensland outback tour, and here for more on our other Australia tours.