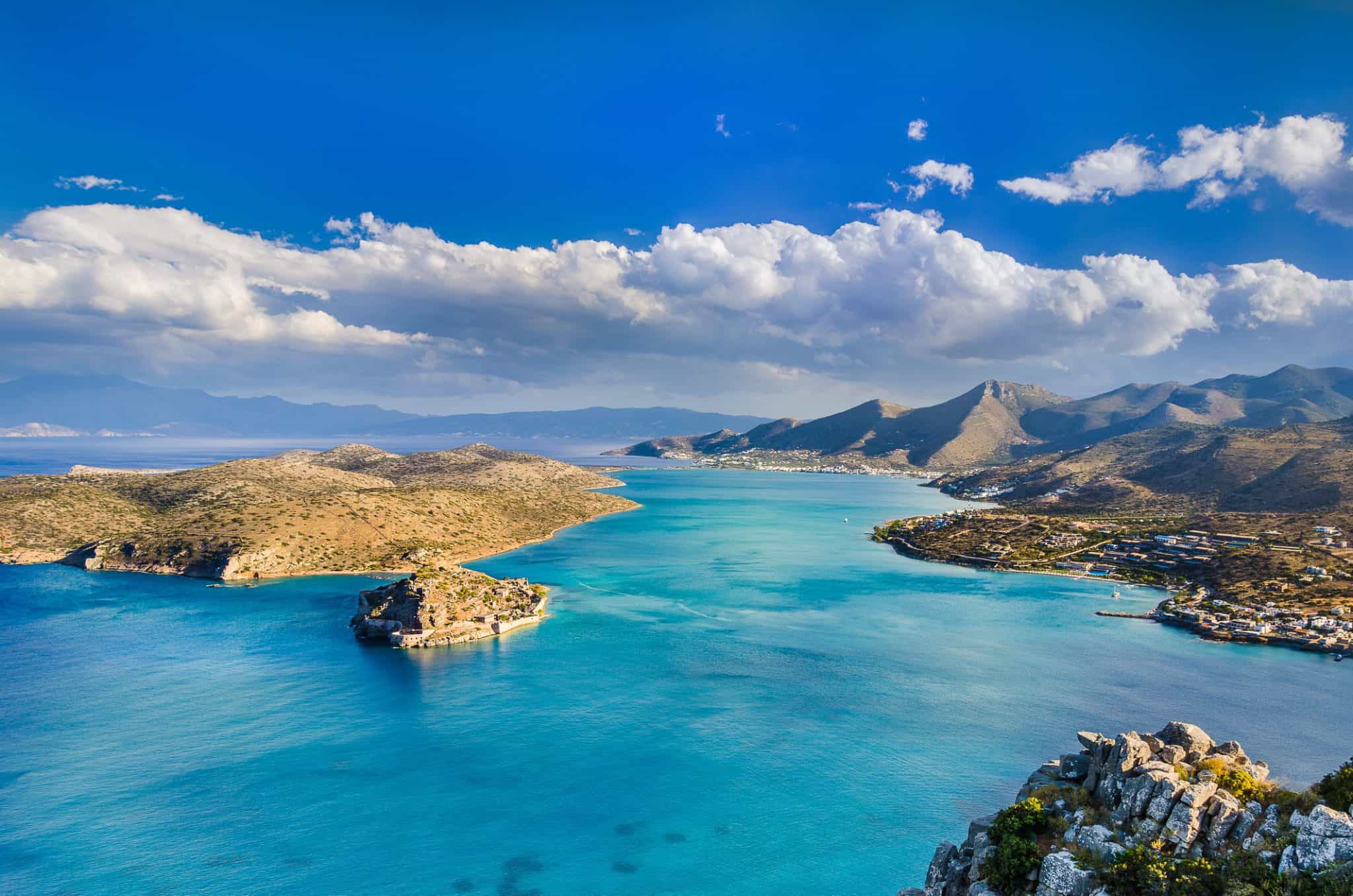 Spinalonga has, at times, been given the unfortunate nickname, ‘The Island of the Living Dead’ but despite this dark label most Greek and Cretan people know something of the island’s long history. In addition, local people will tell you of the island’s beauty even though much of its 35 hectares lies barren. The small island and its archaeological site are only a boat trip across Elounda harbour. The island fortress and its former leper hospital can easily be seen from the shores of Mirabello Bay close to the town of Agios Nikolaos, in the prefecture of Lasithi in the north-eastern region of the island of Crete.

When you first look out towards the island something to note is that Spinalonga has not always been an island, completely separated from Crete. Although there has been no concrete evidence found in the sources, it is believed the Venetians destroyed some of what was then Spinalonga peninsula to create the island, fortifying this to protect the port of the old town of ancient Olus. The remains of some of the ancient city are a short walk from present-day Eloundra, near the salt pans of the Venetian period. Most of the ancient ruins of this Minoan city now lies under the water that requires only a short swim with a suitable mask to view.

Odyssey Traveller has an escorted small group tour of Crete which includes a day trip to this Greek island which is metres off the coast of Crete. Spinalonga is visited from the old town of Agios Nikolaos on day 6 of escorted tour of minoan civilisation.

This 21 day in depth tour of Minoan civilisation visits the Archaeological site that define the Minoan, exploring with the tour guide the ancient ruins and time in the relevant archaeological museum(s). This escorted tour starts in Heraklion, travels onto Agios Nikolaos then Sitia. this escorted tour then makes the trip to Western Crete to explore the best archaeological site for Minoan civilisation in the discovered ancient ruins on this part of Crete. The tour director leads you the traveller to Rethymno, Chania and visits the old town of Stylos, Kissamos and return to Heraklion. The tour director leads this guided tour with an itinerary that covers the Island of Crete and Minoan civilisation for curious mature and senior travellers interested in participating on the best escorted small group tour of Crete from Australia and New Zealand.

The Venetian occupation and control of Crete as a trading centre and colony began soon after the Fourth Crusade in 1204. For the Ventians maritime commerce was the mainstay for this great trading people, and with Crete they were able with this collection of Venetian harbour anchorages to extend their networks still further into Asia and North Africa. The site of the ancient city of Olus and of the village of Elonda (as called in Venetian documents) provided the traders with an excellent Venetian harbour and also areas where they established collection vats in shallow waters to gather salt for a very lucrative venture.

For much of the Venetian period on Crete they were able to dominate most areas of the Mediterranean. However, such control was not without problems and the constant and continual threat from pirate groups roaming the trade routes meaning the Venetians sought to better fortify their Venetian harbour sites and towns. And so, from 1579, not only were the general fortifications of each Venetian harbour strengthened but also the fortress on Spinalonga was constructed on the remains of the ancient acropolis of Olus. With the completion of the fortress and installation of up to 35 large cannon, the island of Spinalonga became one of the most impenetrable in the entire Mediterranean for the Venetian military presence.

Whether it was due to the strength of the fortress or perhaps because of measured diplomacy, Spinalonga was able to remain in Venetian hands well after the occupation of the rest of Crete by the Ottoman Turk. The Cretan War and the Cretan revolt had brought about limited successes against the Ottoman Empire. However, it was not until 1715 that the Turks were able to finally vanquish the small island bringing to an end the Venetian rule in the region. When the Turkish eventually surrendered Crete at the beginning of the 20th century, after pressure from the great powers in Europe, the island became part of Greece.

Spinalonga in the 20th century.

Sadly, even though Spinalonga’s  history stretches back far into antiquity and beyond, the island’s fame, or rather reputation spread worldwide when it became home to a leper colony in 1903.

A true understanding of the leper patient and the disease were many, many years away when it was first recognised that leprosy could be infectious. At that time, the only coping strategy was strict isolation. For Greece, Spinalonga island and its Venetian fortress were chosen as the isolation centre. In its early years poor unfortunate people with the infection were shut away in appalling conditions to await certain death. There was little or no hope of a cure or possibility of escape from a camp with absolutely no infrastructure in place for dealing with the sick.  There was not even provision made for fresh water on the island. Moreover, it appears that the misinformed doctors of the time often committed people suffering from any visible skin disease mistaking this for leprosy.

No progress was made until 1936 when a young student, Epaminodas Remountakis, was diagnosed and sent to isolation. Rather than just give up he rallied support around him establishing the Brotherhood of Spinolonga and working towards improving the living conditions for the ailing population of the island.  Gradually improvements were made with the houses finally being cleaned and painted, a paved road reopened and a service to provide cleaning to the people of Spinalonga. Sometime later, a power generator arrived at the island to provide street lighting as well as power for a small cinema. Money came from various sources but it can also be assumed that families that had yet to completely abandon their loved ones contributed where they could to create liveable and more comfortable conditions on the island.

The inhabitants began to see hope and as time passed further additions to the community were added including a coffee shop as well as a barbers. People there began to finally live a normal life or rather as best they could in such isolation. They were able to go to church, to school and even to take the chance to fall in love again. Suddenly they were able to see something else in their lives other than just a struggle for survival.

With the advent of a new drug to fight against the highly stigmatised disease in 1948, the number of people coming to the island slowly decreased with the very last inhabitant of the colony departing the island in 1962. Unfortunately, common misunderstandings of Leprosy continued with sufferers viewed more as monsters than patients. This meant that Spinalonga rated barely a mention and was avoided at all costs by locals and visitors alike.

Today though things have changed and a visit to what was once called the Grave of the Living has now become one of the most often visited sites on a Crete tour, second only to the Minoan palace at Knossos. Quite an achievement for an uninhabited island. After you leave the ferry that takes you across Elounda Bay, but before you enter, look to the small plaque entreating all visitors to the former leper colony to respect the memory of the souls that suffered here. It is likely as you wander the narrow streets you may feel something of the island’s previous inhabitants of Spinalonga fortress on a soft breeze.

The island has officially been renamed Kalydron but it is almost impossible to find references made to the new title, perhaps more attractive to visitors’ imaginations.  Spinalonga’s heritage, both distant and more recent, lives on echoing off its wall and its buildings.

Spinalonga’s history and collection of ancient ruins on Odyssey’s Crete tour makes for a popular walking tour after the short ferry ride as a day trip from Agios Nikolaos. It’s inclusion in the itinerary at this part of the Odyssey escorted tour program begins a greater understanding of the long history of the island and its pivotal role in the Mediterranean sea for centuries.