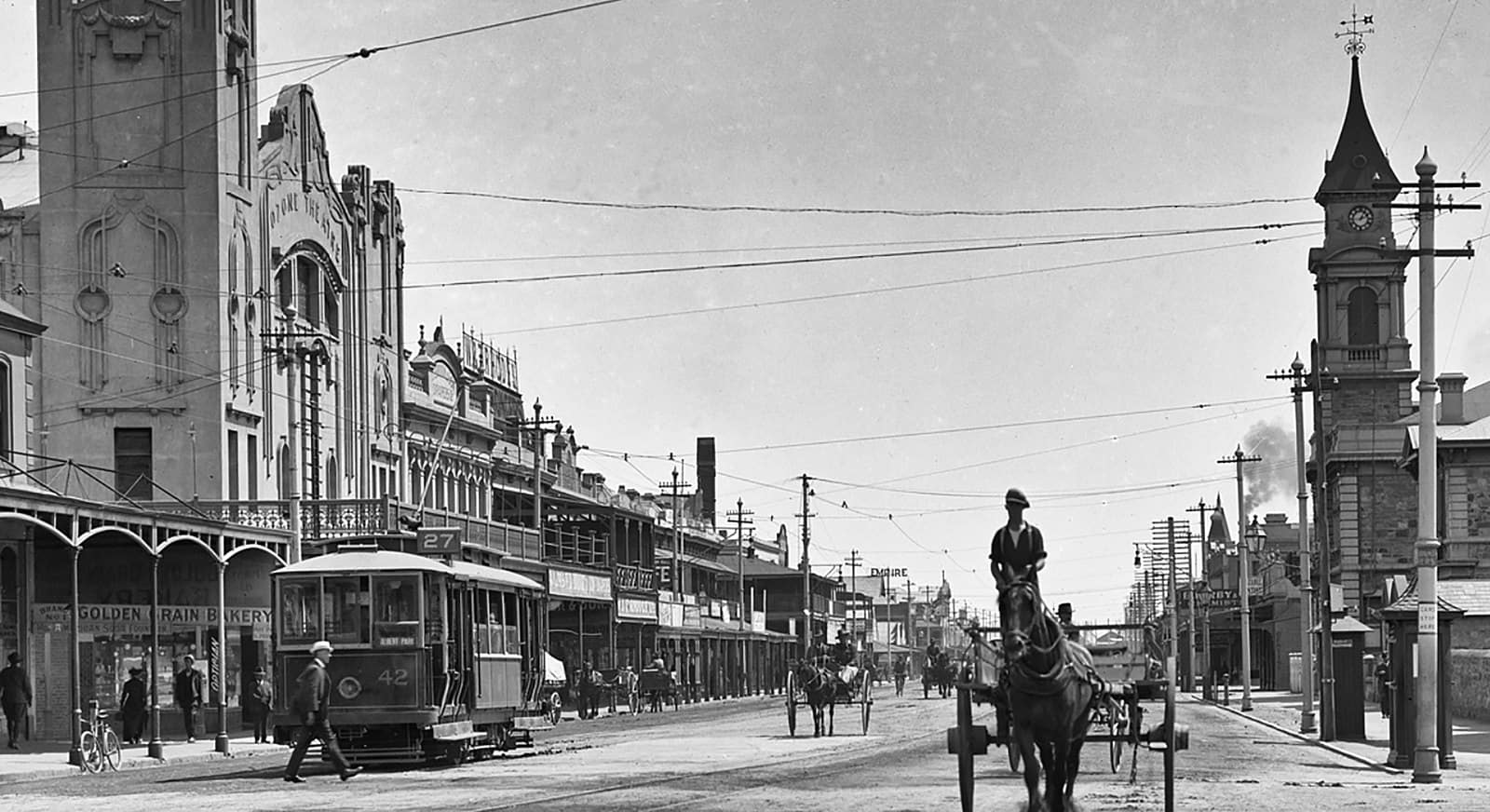 If convict-free Adelaide has always been the most genteel of Australian cities, working-class Port Adelaide was the gritty underbelly. Today a revitalised hub of museums and street art, Port Adelaide offers a number of fascinating opportunities to delve into the maritime history of South Australia.

Located about 14 km from the centre of Adelaide, Port Adelaide played an important role in the early history of the colony of South Australia. The surveyor-general of South Australia and developer of Adelaide’s grid system, Colonel William Light, selected the spot, despite the protests of the Governor John Hindmarsh, who wanted to see the city centre closer to the port. Light – who was concerned by the lack of fresh water at the port – prevailed, the newspapers continued to grumble, nicknaming the new port ‘Port Misery’ – from a remark by T. Horton James:

This is Port Adelaide! Port Misery would be a better name; for nothing in any other part of the world can surpass it in every thing that is wretched and inconvenient.

Despite the initial problems, Port Adelaide took off as the colony prospered. The river channel was deepened and widened, with the silt used for land reclamation on the banks. The Government of South Australia established a Customs House and Harbor Master’s Residence, while wharves were built by private enterprise (though a number were eventually taken over by the government). In 1856, South Australia’s first steam train linked Port Adelaide with the Adelaide city centre.

In the 1860s, Port Adelaide grew further as the products of the state’s successful mining and agricultural industries (particularly wheat and wool) were exported to the world. By 1911, the Port was South Australia’s second-largest city, with a population half the size of Adelaide’s. The town was home for dock workers, and an initial port-of-call for immigrants from all around the world. The community became notorious for the number of pubs catering to dock workers and other industrial workers – from 1836 to 1906, over sixty different pubs were operated on 38 premises.

Port Adelaide also became a centre of social movements. In the mid-1800s, religious and progressive leaders sought to combat alcoholism and prostitution amongst port workers. By the turn of the century, Port Adelaide had become a centre of the Australian union movement, as workers fought for better conditions on the docks and in the surrounding industries.

Port Adelaide continued to thrive as a major shipping port until the 1970s. The introduction of containerisation in the 1960s significantly reduced the local workforce, while suburbanisation saw the once-significant shopping and commercial precinct (once second only to Adelaide) decline as shoppers instead went to indoor shopping malls. In the last decades of the 20th century, parts of Port Adelaide lay derelict.

The result of this neglect was that its early and mid-Victorian streetscape was virtually untouched by development. In 1982, Port Adelaide was declared as a State Heritage Area, recognised as South Australia’s ‘most substantial and continuous grouping of colonial buildings’, with eighteen sites entered in the State Heritage Register. However, in 2009, Port Adelaide was named one of Australia’s most at-risk heritage sites, due to the lack of people living in or visiting the area.

In the 21st century, Port Adelaide has been revitalised by the Our Port project launched by Renewal SA. Old warehouses now play host to theatre companies and art galleries, while the area is renowned for its street art. In addition to the charming old pubs – many of which have been restored in heritage style – restaurants and cafes are opening up in the area.

Port Adelaide is also home to a number of interesting museums, including:

A particular highlight of the museum is the Active II, a replica of the ketch ships that took goods and products from town to country in the late 19th and early 20th centuries. Dubbed the ‘mosquito fleet’ because of their ability to flit across mudflats, the ketches were small and rough working craft operated by tough seafarers. The Active II is a replica of a boat built in 1873, which worked the coast until 1959. Visitors have the opportunity to climb aboard and experience what life was like for the hardy crew of the ketches!

Port Adelaide is also home to the Aviation Museum, which explores the history of aviation in South Australia, dating back to 1910. Visitors have the opportunity not just to see, but sit inside some of Australia’s finest heritage aircraft. Displays also include a flight simulator, air traffic control station, and exhibition of rockets developed in the Cold War base at Woomera.

The National Railway Museum is Australia’s largest railway museum, home to over 100 exhibits of State, Commonwealth, and privately-owned railway operations, housed within two large pavilions and a heritage-listed 1870s goods shed. The Museum displays a variety of steam locomotives, diesel engines, and carriages – many of which can be explored. On site, all three gauges used in Australia – narrow, standard, and broad – are represented. The Museum also includes Callington Station, a typical rural railway station that once sat on the Melbourne-Adelaide line, before being moved to the Museum in 1991.

Collections include exhibits telling interesting stories from the heyday of the railways: including an exploration of the lives of women on the railways, and an exhibit devoted to the famous ‘Tea and Sugar’ line, which brought goods to families living on the barren Nullabor Plain.

The National Railway Museum also operates a heritage train line from the popular Semaphore cafe strip to historic Fort Glanville, passing along the scenic Adelaide coastline. For those who don’t want to go too far afield, the Museum ticket also includes a short ride on a steam train around the perimeter of the large site.

Odyssey Traveller makes a walking tour of the historic buildings and museums of Port Adelaide as part of our new tour of Adelaide. Basing ourselves in hotel accommodation in the city for eight nights, we delve into the history and culture of Adelaide. We explore the attractions of the city centre and North Terrace, and visit the incredible collection of William Morris decorative arts at the Art Gallery of South Australia, a lesser-known Adelaide highlight.

Our tour also takes you through the sights of the surrounding region through a number of day tours. We travel through the stunning scenery of the Fleurieu Peninsula to view Kangaroo Island, and stop in at the McLaren Vale for a wine tasting and lunch in a local restaurant. We also enjoy a day trip to the Barossa Valley, a Murray River cruise, and a day tour of the Adelaide Hills.

Adelaide is internationally famous for the quality of its food and wine, and our tour gives you plenty of time to taste local produce: whether that’s sampling cheese at the Central Market, or enjoying tastings in the Barossa Valley or McLaren Vale.

Every Odyssey Traveller guided tour is designed for mature and senior travellers, who seek an authentic and informed experience of their destination. Our trip is led by an informed tour guide, chosen for their local knowledge, and we travel in small groups of 6 to 12 guests. If that appeals to you, click here for more information.