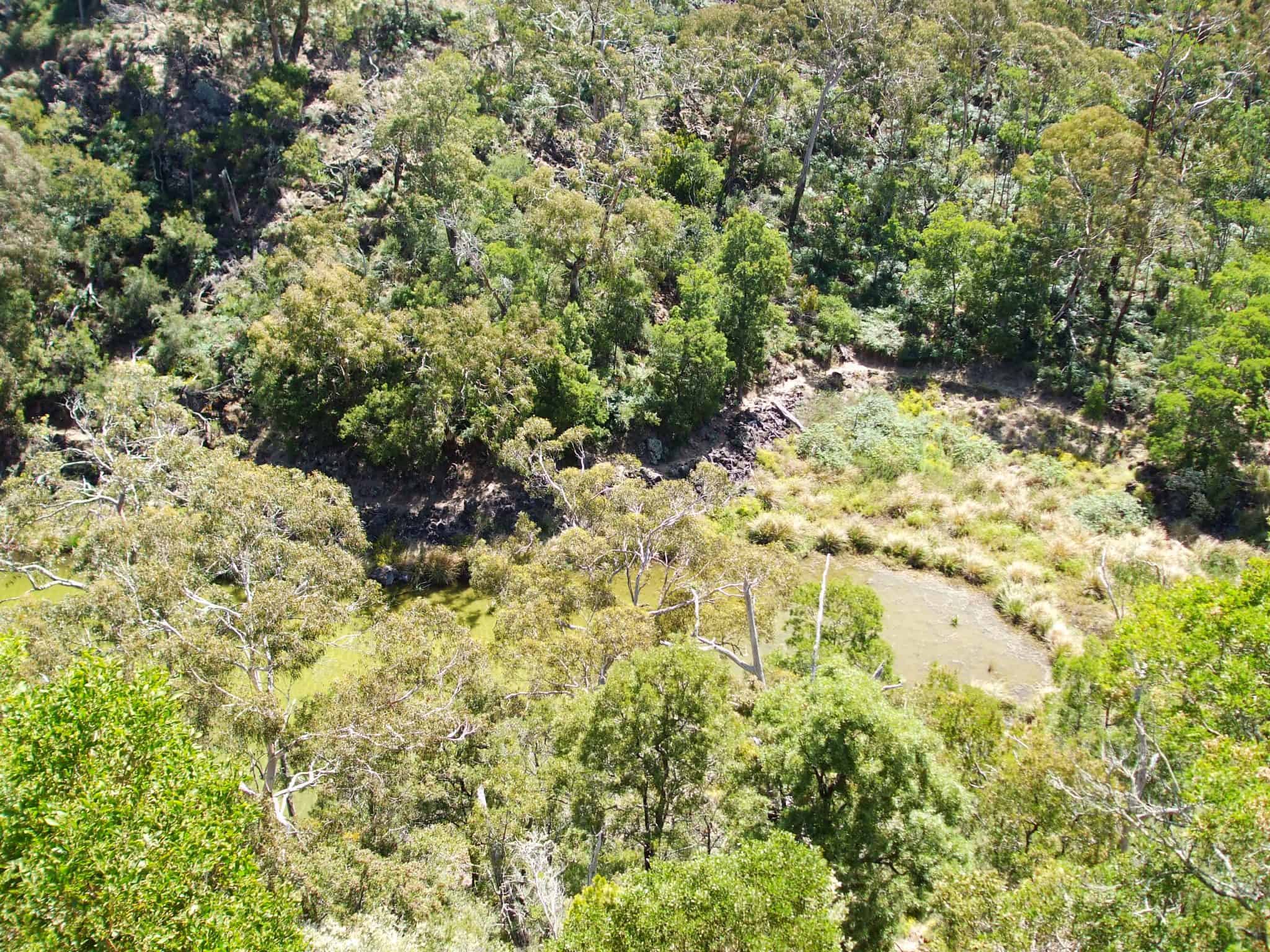 In 2019, the Budj Bim Cultural Landscape was included on the UNESCO World Heritage List, the first site to be included solely on the grounds of its Aboriginal cultural importance. Dating back at least 6600 years, it is one of the world’s oldest and most extensive examples of aquaculture.

The Budj Bim Cultural Landscape is located within the traditional country of the Gunditjmara Aboriginal people, in south-western Victoria, north of the Great Ocean Road. The site centres around the dormant volcano Budj Bim, formerly known as Mount Eccles.

Budj Bim was formed by volcanic eruptions around 27,000 years ago. The volcano erupted at least 10 times, with the most recent eruption dating to around 7000 years ago. Lava from Budj Bim spread over 50 kilometres to the south, creating a landscape rich in lakes, ponds and swamps – including Tae Rak (Lake Condah) and the Condah Swamp – all rich in aquatic life.

This allowed the Gunditjmara people to create a complex set of fish traps, drawing upon their knowledge of the seasonal rise and fall of water levels and of the geologic processes that surrounded them. They dug shallow channels – some up to 200 metres long – into rock in order to divert water, and used volcanic rock to build V-shaped traps and weirs.

The complex system of water channels allowed the Gunditjmara to control water flows, enabling them to systematically trap and store kooyang (short-finned eel or Anguilla australis). The Gunditjmara people also constructed long eel baskets, made of river reeds and steel grass, to regulate and trap the eels according to their size.

As UNESCO writes, ‘The highly productive aquaculture system provided a six millennia-long economic and social base for Gunditjmara society.’ Some eels were kept alive and grown fat in holding ponds, to be eaten later. They were also preserved by smoking in the hollows of large trees.

A valuable commodity, the eels were traded with other Aboriginal language groups, bringing prosperity to the Gunditjmara group. There is evidence of permanent stone dwellings near the traps, indicating that a village was set up nearby. The site – along with other cultural sites around Australia – busts the myth that all Aboriginal people were nomadic hunter-gatherers.

The Budj Bim Cultural Landscape is intwined with Gunditjmara cultural practices. The dynamic relationship between the Gunditjmara and their land is ongoing, passed down through oral history, cultural practice, and confirmed by scientific and historical research. The Gunditjmara have what UNESCO refers to as a ‘deep time’ conception of their cultural landscape.

Budj Bim figures heavily in Gunditjmara creation story. Thirty thousand years ago, their ancestors watched the eruption of the Budj Bim volcano, where the Ancestral Being, Budj Bim (‘Big Head’) transformed himself into the landscape.

Tragically, European colonisation would threaten the Budj Bim cultural landscape. From around 1810, the seasonal presence of whalers and sealers would impact the Gunditjmara people. Following Edward Henty in 1834, European settlers began to arrive in the Portland Area.

The 1840s would see the outbreak of the Eumeralla Wars, a tragic convict between the Gunditjmara people and settlers – with the result that by 1846, Gunditjmara resistance was suppressed. In the 1850s, Aboriginal people across Australia were increasingly moved into church-run missions. Framlingham Mission opened further west, but the Gunditjmara people campaigned to stay in their traditional land. In response, Lake Condah mission opened in 1867.

The mission was officially closed in 1918, and the mission lands returned to the Gunditjmara people in 1987.

With the support of state and federal governments, Gunditjmara traditional owners prepared a report detailing the archaeological and cultural importance of the site. It was presented to the 43rd session of the World Heritage Committee in Baku, Azerbaijan, in June-July 2019. Awarded World Heritage Status, the site joins over twenty other Australian locations on the list.