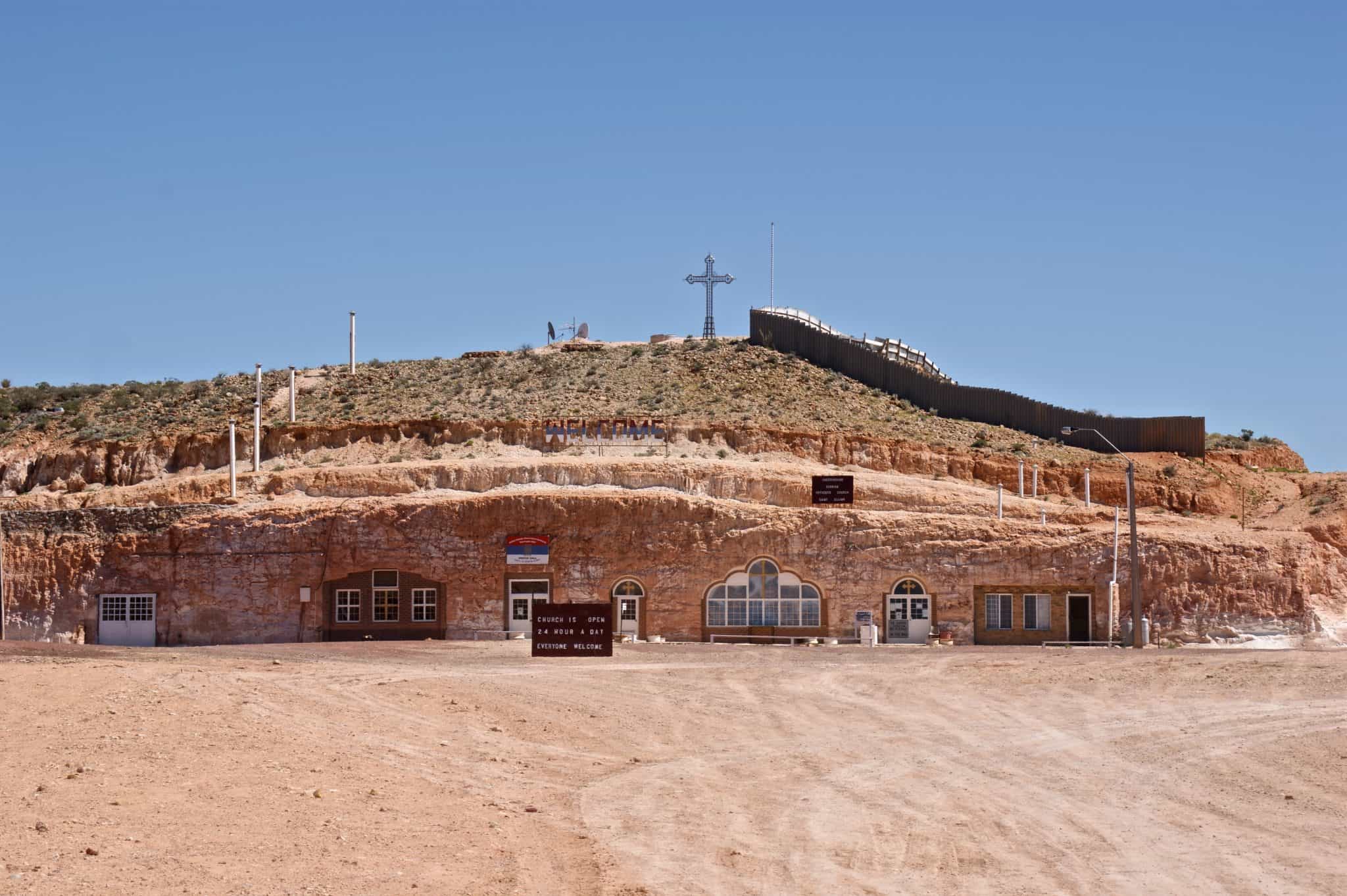 Declared by the UK Telegraph to be ‘ the world’s strangest town ‘, the underground opal mining settlement of Coober Pedy is the quintessential Australian outback, where a quirky lifestyle is determined by the harsh temperatures and arid desert landscape. This is a desert opal mining town, just off the Stuart Highway, the last outpost on the road to the Northern Territory. Or the link to Oodnadatta which is on to the civilized side of the South Australian outback the localssay.

The traditional owners of the land where Coober Pedy was established are the Antakirinja aboriginal people. The area was passed through by John McDowell Stuart on his 1858 expedition. However, the town of Cooper Pedy was not established until 1915, when a 14-year old boy found a precious opal in a remote part of the South Australian outback. Soon afterwards, miners flocked to the area, many of them World War I veterans, hoping to strike it rich.

The extremely harsh summer desert temperatures – average highs in January are around 36 degrees, with record highs almost reaching 48 degrees – led the miners (many of whom were experienced trench diggers!) to dig homes under the ground to avoid the heat. The baffled reactions of local aboriginal people gave the town the name ‘Coober Pedy‘, which roughly translates as ‘white man’s hole in the ground’.

Today, Coober Pedy is the ‘opal capital of the world’, producing around 70% of the world’s opals. Unlike Australia‘s other mining industries, opal mining in Coober Pedy is not dominated by huge mining companies, because opal mines cannot be quantified through exploratory drilling – the only way to find it is to dig! Miners can simply turn up, obtain a land permit, and burrow in the opal field, rather like in the heyday of the Victorian gold fields, though most miners these days use expensive tunnelling machinery. Visitors are welcome to try their hand at ‘noodling’, manually digging through piles of excavated earth that dominate the landscape.

Coober Pedy has a population of around 1,800 but is surprisingly diverse, with over 50 nationalities in this desert town of outback South Australia, many drawn by the lure of opal mining (or the chance to make money in the tourism industry). Even today, half of the town‘s population lives in a underground home in ‘dugouts’, the name given to an underground house. Far from simple holes in the ground, dugouts can be rather luxurious, with multiple bedrooms, billiard rooms, and even (further) underground swimming pools.

A number of this desert town amenities can also be found underground, including an underground hotel, underground museum or the striking Catholic Church and Serbian Orthodox Church, with intricate carvings of saints in each of the underground church walls. Visitors are welcome to find underground accommodation in the camping ground, or the Desert Cave Hotel.

Coober Pedy is also home to a golf course,which is also a tourist attraction, but because of the high temperatures, most games are played at night with glow-in-the-dark balls. The course gives golfers squares of carpet to serve as grass for their balls. Cooper Pedy‘s golf course is also the only golf course in the world whose members have reciprocal rights with the Royal and Ancient Golf Club in St Andrews, Scotland, the world’s oldest and most prestigious golf club.

Even if you’ve never been to Coober Pedy before, you’ll likely recognise some of the scenery due to its starring role in Hollywood movies. Coober Pedy provided locations for movies including Mad Max Beyond Thunderdome, Pitch Black, and Priscilla, Queen of the Desert.

Visitors to Coober Pedy can learn about opal mining at the underground Umoona Mine and Settlement, which explores Aboriginal history and early mining. See fossils mined from the inland sea that once covered the area, and join a guided tour to see a typical contemporary dugout. The Old Timers Mine is home to a preserved mine – rediscovered in 1968 – that examines the mining conditions in the early days of the settlement. There’s also a museum and a historic home, and you can even try your luck noodling!

The area surrounding Coober Pedy is home to astounding scenery, particularly the spectacular arid land of the Kanku-Breakaways National Park. The national park is home to almost 60 flora species – including acacias, mallee and eremophilia – and a wide variety of wildlife, including red kangaroos, echidnas, rock wallabies, numerous bird species, and the fat-tailed dunnart, a mouse-like marsupial.

Odyssey Traveller visits Coober Pedy as part of our Tour of the Flinders Ranges and the South Australian Outback. Beginning in Adelaide, we head to Port Augusta on the Spencer Gulf, before heading to Coober Pedy. After Coober Pedy, we head to Lake Eyre National Park, where we take a scenic flight over Lake Eyre. From Lake Eyre, we wind our way back to Adelaide through the iconic Flinders Ranges. Beginning in Arkaroola Wilderness Sanctuary in the Northern Flinders Ranges, we then head to Ikara Flinders Ranges National Park. In Ikara Flinders, we visit the iconic Wilpena Pound, a natural amphitheatre of mountains with its highest point at St Mary’s Peak. Wilpena is known to the local Adnyamathanha people as Ikara, and has a strong cultural significance. We also take the Brachina Gorge Geology Walk, a self-directed trail which explores the fascinating geology of the Flinders Ranges. On this walk we might have the opportunity to see the elusive yellow-footed rock-wallaby! The Flinders Ranges are also home to stunning gorges, including Bunyeroo Gorge, Parachilna Gorge (near the historic Prairie Hotel) and Alligator Gorge, in the Southern Flinders Ranges.

From the Flinders Ranges National Park we return to Adelaide via the Southern Flinders, ending our tour with one nights accommodation in the city. While our tour ends here, that doesn’t mean your trip has to! Consider staying a couple of nights in Adelaide, to visit the incredible sights of the Adelaide region, including the Barossa and Maclaren Vale wine regions and Kangaroo Island.

If you’re interested in visiting outback South Australia, think about joining an Odyssey Tour. We have been serving mature and senior travellers since 1983, and pride ourselves on offering a unique experience. While we take in the major tourist sites – Coober Pedy, the Flinders Range, Wilpena Pound – our tour takes the time to learn about local life and culture. Our tour explores the rich Aboriginal heritage of the Flinders Ranges, and views ancient Aboriginal art on walking trails through the park. We also learn about the settler heritage of the area at Old Wilpena Station, and explore the Cold War use of outback South Australia for rocket testing at Woomera.

If that interests you, click here for more information.