Odyssey offers easy, convenient, and relaxed escorted small group tours across Eastern Europe and beyond. We explore Poland’s incredible natural beauty, its medieval commonwealth heritage, its World Heritage Sites, and fascinating cities, all with some truly spectacular scenery along the way. This and more is all waiting to be explored on one of Odyssey’s small group tours of Poland, designed for the senior traveller, and led by experienced, and enthusiastic like minded people.

Poland, situated in central Europe between Russia and Germany, welcomes many travellers eager to know more about its history and see its natural beauty. Warsaw is its capital and largest city, and the city’s motto, Contemnit procellas (“It defies the storms”), is testament to the city’s–and the country’s–perseverance, rising several times from the ashes after being destroyed by wars and invading armies. From a walking tour in Warsaw and its fascinating Old Town on the banks of the River Vistula, head out to visit the ancient royal capital, Krakow, the port city of Gdansk, and the old cities that shaped the heart and soul of Poland. Ancient castles and old churches dot the landscape, while the forests and grasslands of the country offer some remarkable sights for those wanting to take in some natural scenery.

The beautiful Royal Route in Warsaw features a number of historical landmarks connecting the three former residences of Polish rulers: The Royal Castle, Lazienki Krolewskie and the lavish Royal Wilanow Palace and Park, built as a residence of John III Sobieski who ruled Poland in the 17th century. Another UNESCO World Heritage Site is the 13th century Castle of Malbork, which was built by the Teutonic Knights as the headquarters of their Grand Master. This massive stronghold of red brick mirrored the might of the order. The Salt Mine in Wieliczka is a unique and world-class attraction that is on the World Heritage list as well. This subterranean salt mine, established in the 13th century, is distributed across nine levels, providing a labyrinth of tunnels and chambers (and even chapels!) adorned with salt sculptures that members of the public can explore.

Other monuments built in Poland during the 14th to the 17th centuries were the Wooden Churches of Southern Malopolska, considered the best preserved wooden Gothic churches characteristic of the region and time period, and the timber-framed Churches of Peace in Jawor and Swidnica, erected by the Lutherans during the Peace of Westphalia in 1648 that ended the European wars of religion.

Warsaw was destroyed by Nazi troops in 1944 and some three million Polish Jews were killed in Nazi extermination camps. A visit to Auschwitz with its memorial and museum is to bear witness to this horrific past that affected not only Polish Jews but Jews from all over Europe. Warsaw was designated a UNESCO World Heritage Site following its meticulous restoration after World War II. UNESCO calls it “an outstanding example of a near-total reconstruction of a span of history covering the 13th to the 20th century.” 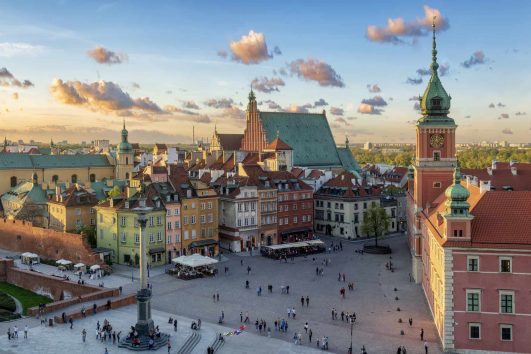 The History of Warsaw Warsaw, the Polish capital city, has a fascinating history of cultural and economic development in the face of foreign occupation. Emerging in the 14th century as an important central trading point,… 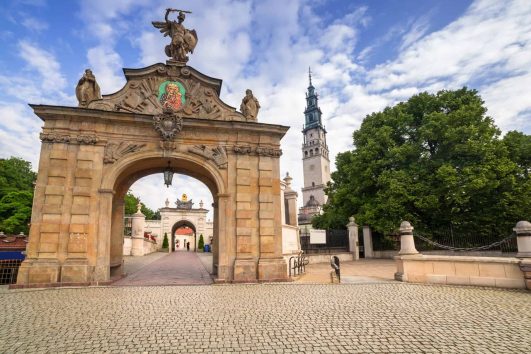 Questions about Poland for senior Travellers

Consider and Escorted small group tours for mature and senior travellers to Poland. Designed for couples and solo travellers who like to explore and enjoy learning as they travel to the historic sites of Poland including Warsaw , Gdansk  and beyond. 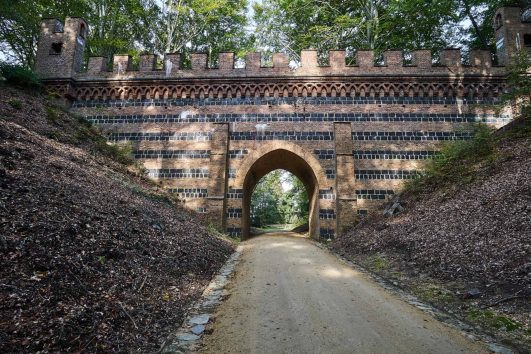 Historic Sites of Poland: The Definitive Guide for Travellers

Castles, Palaces, and Other Historic Sites of Poland Poland, situated in central Europe between Russia and Germany, welcomes many travellers eager to know more about its history and see its natural beauty. Warsaw is its capital and…

21 days
Estonia, Finland
Departing Sep, May
The need to know

Odyssey travels by coach and occasionally uses local transport, including trains and ferries. Specifics are always outlined in your tour itinerary. Trains are cheap and convenient, with inter-city services between major cities. Bus services are also widely available, though be sure to purchase a ticket from the bus station to ensure you get a seat.

Poland covers an area of 313k square kilometres, and is largely flat, with the ‘Polish Plain’ stretching across the centre of the country. The northeastern region features many lakes and dense forests, while the Carpathian Mountains rise up at the southern end of the country.

Poland has a largely temperate climate, featuring warm summers, cold winters, and cool to warm spring and autumn periods. If travelling between November and March, be prepared for cold weather, with freezing temperatures being common in winter.

Poland has 15 UNESCO World Heritage Sites. You can view the official list of the sites here (https://whc.unesco.org/en/statesparties/pl). While every site has something of value, here are a few highlights:

Numerous festivals and events dot the calendar in Poland. Perhaps the biggest and most important national celebration is National Independence Day – held on 11 November, Independence Day commemorates the restoration of Poland’s sovereignty in 1918 and features military parades, festive celebrations, and even commemoration runs. The Warsaw International Film Festival attracts thousands of film lovers and participants, and screens films from all over the world. All Saints Day on November 1 is another important day on the national calendar, where families decorate cemeteries with thousands of glowing candles and remember deceased loved ones.

Polish food heavily features meat, winter vegetables and starch. One of the best known dishes of Poland is pierogi, dumplings made out of unleavened dough and filled with either sweet or savoury filings. Bigos is another national favourite, a dish of various meats stewed with sauerkraut and shredded fresh cabbage. The Polish are famously enthusiastic consumers of vodka, though beer is also very popular. Tea is also widely consumed, while other non-alcoholic beverages include kvass and kefir.

Poland is generally a safe country to travel around in, though exercise common sense whenever travelling.

Whenever you travel overseas, it’s always wise to take an appropriate travel adapter. The standard voltage in Poland is 230V, while the standard frequency is 50Hz. Poland uses Type C and Type E electrical plugs. 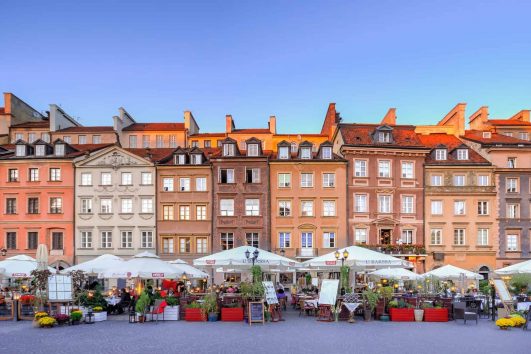 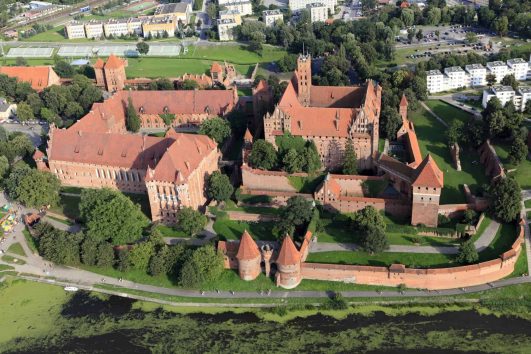 Castle of the Teutonic Order in Malbork

Castle of the Teutonic Order in Malbork, an elaborate Gothic-style castle built in the medieval period

What time zone is Poland in?

Poland has a single time zone, Central Standard European Time (UTC+1). Daylight Savings in Poland starts at the end of March and concludes at the end of October.

How much should I tip in Poland?

If you’re on an Odyssey tour, we take care of tipping so you don’t need to give it a second thought. However, in your free time, or if travelling independently, it’s essential that you tip an appropriate amount for services, as is the case throughout much of Europe. Tipping is customary for good service in hotels and restaurants, though it is not obligatory. Tips are generally 10-15% of the bill in restaurants and bars.

What is the currency of Poland?

Though Poland has been a member of the European Union since 2004, it has not adopted the euro and instead uses the Polish złoty (zł, pronounced zwo-ti). You can get the local currency by exchanging at the banks or using ATMs. Kantors or private money-changer offices can also be approached, especially if you’re holding major currencies such as the Euro or US dollars.

When is the best time to visit Poland?

High season is the summer (May-September), with sunny days – and big crowds. Winter is less crowded, but expect cold weather, often below freezing. Our tours of Poland generally leave in the spring and autumn shoulder season, so that you can enjoy milder weather without the craziness of the summer crowds.

External articles to assist you on your visit to Poland.