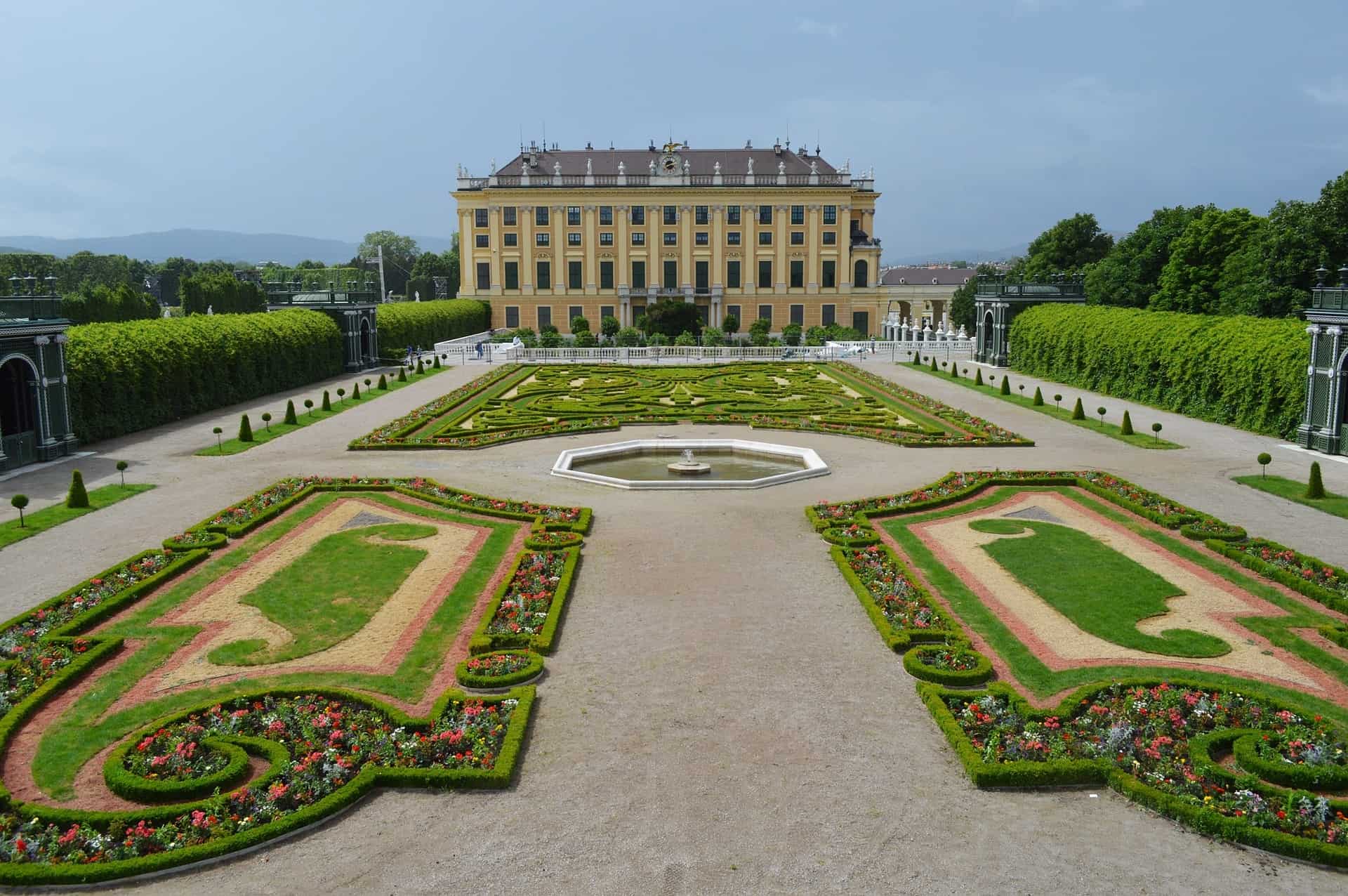 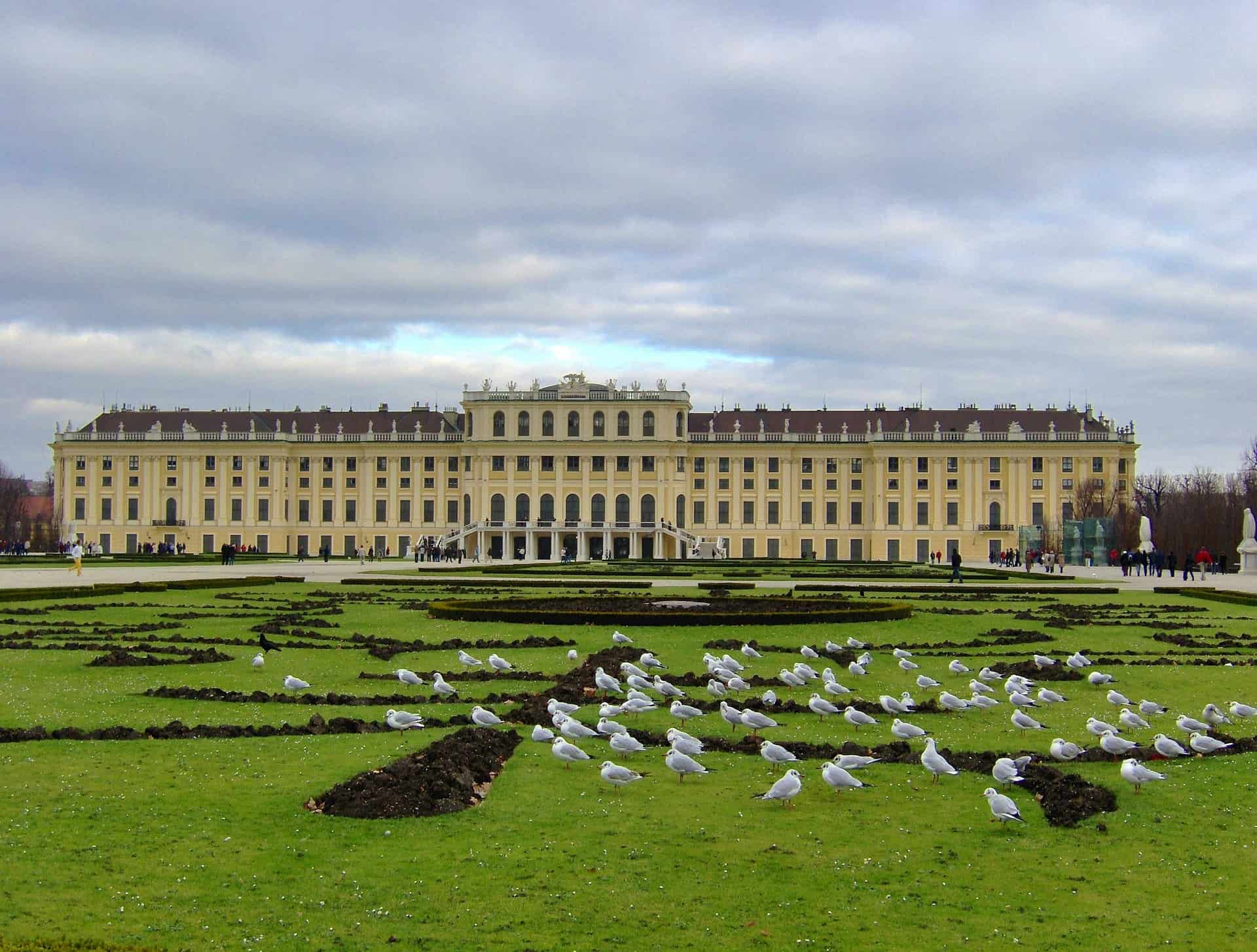 Schonbrunn Palace, also referred to as Schoenbrunn Palace, is Vienna’s most popular attraction and it is not hard to see why. The opulent summer palace of the Habsburgs is a UNESCO World Heritage Site and is considered to be one of the most important cultural, architectural and historical sites in Austria. The palace complex features 1441 rooms (40 of which are open to the public), magnificent gardens, a maze, a palm house, the oldest zoo in Europe and an outdoor swimming pool.

The History of Schonbrunn Palace

In 1569, Maximilian II, Holy Roman Emperor and a member of the Austrian House of Habsburg, purchased a large plot of land by the Wien River.  A former owner had built a mansion on the land called Katterburg and the emperor wanted the land to serve as the court’s recreational hunting ground, ordering the area to be fenced and the introduction of game and exotic birds to the land. In 1637, the estate was bequeathed to the hunting-loving widow of Emperor Ferdinand II, Eleonora von Gonzaga. Gonzaga had a busy social life and liked to entertain so she quickly set about renovating the mansion. Between 1638 and 1642 she had a pleasure palace added to the Katterburg mansion and in 1642, the change of name from Katterburg to Schonbrunn was first documented. It is thought that Gonzaga had the orangery built as well.

In 1683, Gonzaga’s palace and the deer park were badly damaged by Turkish troops during the siege of Vienna. In 1686, it came under the possession of Emperor Leopold I who decided he wanted to transform the estate into a beautiful residence and grand hunting lodge for his son and heir, Joseph. In 1693 Leopold I commissioned Rome-trained architect Johann Bernhard Fischer von Erlach to construct the new residence. Work began in 1696 but the estate remained unfinished when Joseph, then-Emperor, died suddenly of smallpox in 1711. The unfinished palace was bequeathed to his wife, Wilhelmine Amalia. In 1728, it was acquired by Emperor Charles VI, Joseph’s brother, but he only used the estate for hunting pheasants, eventually gifting it to his daughter Maria Theresa.

Maria Theresa became Holy Roman Empress in 1745 and during her reign, Schonbrunn received a complete makeover. The estate was remodelled and under the supervision of the architect Nikolaus Pacassi, Joseph’s hunting lodge became an extravagant, palatial summer residence and the centre of court and political life. The fact that Schonbrunn had become an imperial palace meant that it needed to accommodate up to 1000 people at a time and as a result, a number of wings and rooms were added. A theatre was built at Maria Theresa’s request and the gardens were redesigned, with features such as the Neptune Fountain, the Roman Ruin and the Obelisk Fountain being added.

When Maria Theresa died in 1780, the palace remained unoccupied for several years until the reign of Emperor Franz II. He commissioned the redecoration of the outside of the palace in the neoclassical style that we see today. In 1830, Franz Joseph, who would go on to be the longest-reigning emperor of Austria, was born at Schonbrunn in the apartments occupied by his parents Archduke Franz Karl and Princess Sophie of Bavaria. Franz Joseph spent much of his youth at Schonbrunn and when he succeeded to the throne in 1848, he selected Schonbrunn as his preferred residence. At the beginning of his reign he moved into apartments in the west wing which he would occupy until his death in 1916. His wife Empress Elizabeth, known as Sisi, also lived there.

In November 1918, with the downfall of the Habsburg monarchy, the palace became the property of the Austrian Republic and was preserved as a museum. The palace and gardens were classified as a UNESCO World Heritage Site in 1996.

The Schonbrunn Palace and Gardens are a highlight for a reason and there is plenty to see and do when visiting. As stated, of its 1441 rooms, 40 are available to the public. You can only see the interior of the palace with a guided tour and there are two choices of tour. The Imperial Tour visits 22 of the 40 rooms, including the sumptuous quarters of Franz Joseph and Sisi. You can see Franz Joseph’s bedroom, with the simple soldier’s bed he died in, and Sisi’s apartments which contain pastel portraits of her children by the artist Jean-Etienne Lioatard.

On the Grand Tour, visitors see all 40 rooms including Maria Theresa’s apartments. These feature Maria Antoinette’s room where Napoleon famously stayed (Marie Antoinette was Maria Theresa’s daughter) and the Yellow Room, which features an impressive marble clock belonging to Franz Joseph. THe tours can be done with an audio guide or a tour guide.

The park must also be explored. Covering an area of 200 hectares, the park features numerous gardens, fountains, sculptures and outbuildings, including a zoo and a carriage musuem. One of the most magnificent elements is the Palm House. Once the largest greenhouse in Europe, it is home to many exotic plants and hundreds of butterflies. The Gloriette is also a popular attraction and offers spectacular views of the palace and Vienna. A triumphal set of arches with a viewing platform, the Gloriette was reportedly built so the Empress Maria Theresa had something to look at and admire from her palace windows.

In one section of the resplendent park, you will also find a surprisingly challenging maze. The maze was originally created in 1720 and featured many of the false turns and dead-ends you’d expect from a maze. However, it was demolished in 1892 because various ladies and gentleman of the court were meeting in the centre of the maze to rendevouz and it was causing a bit too much gossip and scandal. It was then rebuilt over a century later in 1999 using the design of the original maze.

It is easy to get lost in the magic of exploring the extensive grounds and those with extra time on their visit to Vienna could spend a day visiting the various attractions and monuments hidden throughout the park.

If you’re interested in getting a taste of Habsburg history, including a visit to Schonbrunn Palace and Gardens, please take a look at our tour Oberammergau Passion Play 2020 & the Habsburg cities. The tour visits the palace as well as other important sights of Vienna. 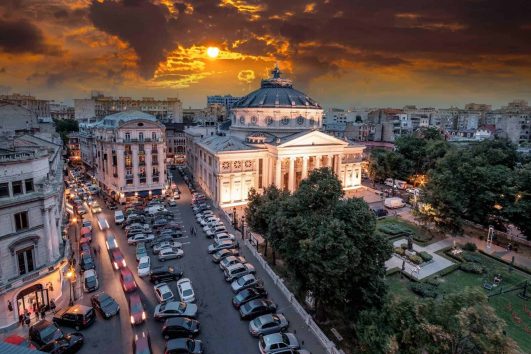 Discover the work and world of this neglected twentieth century musical giant on Odyssey’s small escorted group tour. Explore Enescu’s native Romania before settling down to a feast of his music performed by a host of international stars in Bucharest and immerse yourself in his work with like minded people. Odyssey hopes to provide the group with the opportunity to attend some 30 concerts over 16 days. The next festival is September 2023.