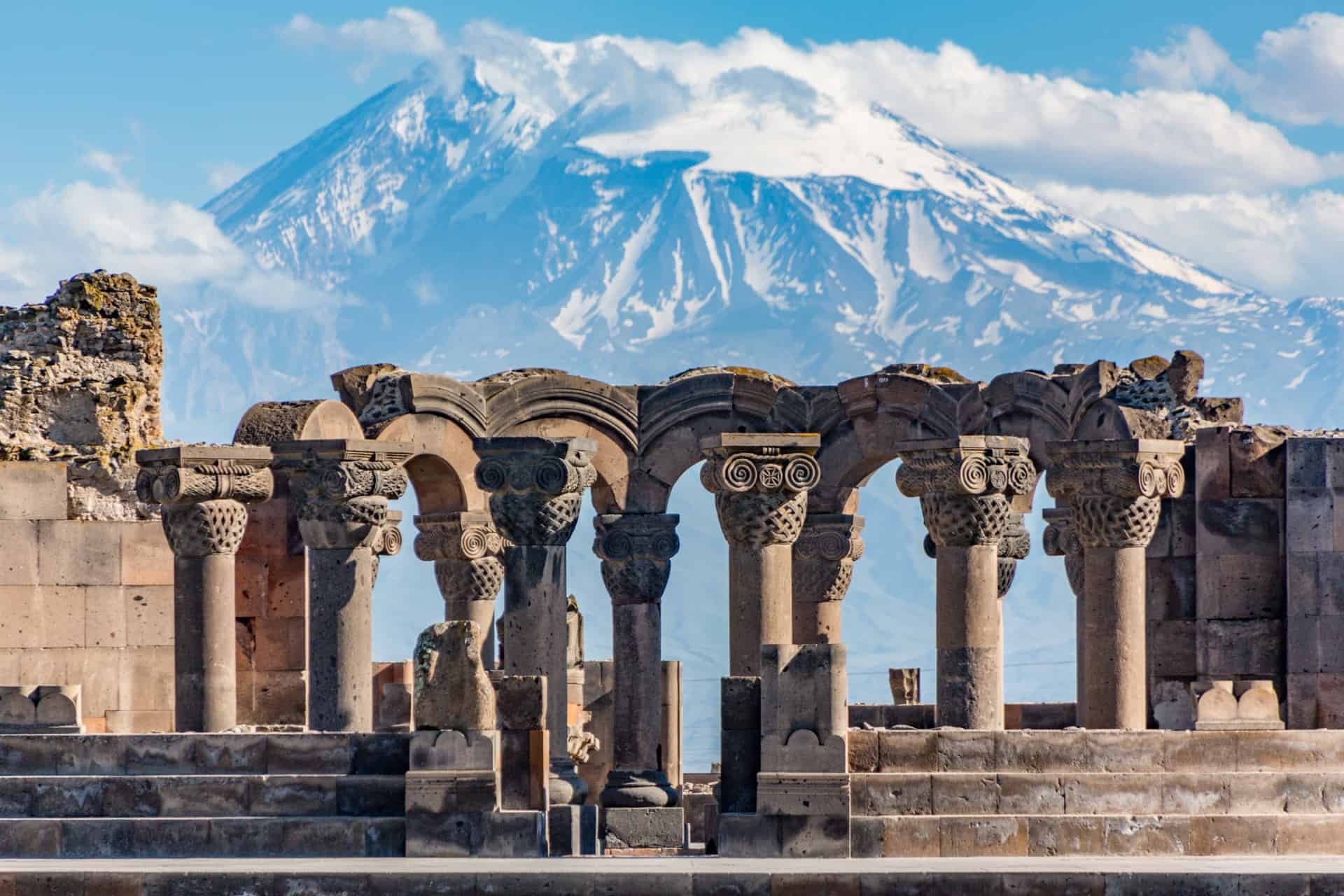 Similar to its neighbouring countries in the South Caucasus, the Republic of Armenia has a history marked by incredible losses and bloody wars, which continued even after its independence from the former Soviet Union. But the tide of history seems to have turned in 2018 with the Armenian ‘Velvet Revolution’ and Armenians expressing hope for a better future.

Armenia’s tourism industry has also been flourishing. A big draw is the capital, Yerevan, 23 kilometres (14 miles) from the Turkish border, and which can be reached by public transport from Armenia’s second largest city, Gyumri. A tour of Yerevan is fascinating on a walking tour, with the city skyline offering a beautiful view of Mt. Ararat (in Turkish territory) in the south. The 2,800-year-old city experienced tremendous growth due to industrialisation, growing from a town of 30,000 people in 1914 to a booming urban centre of more than a million in the latest census.

Most buildings are designed with a pink volcanic stone called tuff, making the city’s scenery glow pink at dusk (as can be seen in the photo below).

On your city tour or group tour of Yerevan, there are many monuments to visit to learn more about the history and culture of Armenia.

Completed in 1967, the Tsitsernakaberd Memorial Complex or the Memorial Complex to Genocide Victims in Yerevan is a monument dedicated to the memory of the Armenians who perished in the Armenian Genocide. The Memorial is composed of a partly split 44-meter arrow-shaped slab of granite, symbolising the Armenian diaspora and unity, and 12 leaning basalt slabs reminiscent of the traditional khachkars, surrounding an eternal flame as though in mourning. Khachkars, also known as the Armenian cross-stones, are carved memorial stone slabs bearing a cross and other intricate detail such as rosettes or carvings of animals.

Walk through Yerevan’s Republic Square, the city’s focal point renowned for its musical fountains. It was designed by architect Alexander Tamanyan in 1924 and originally named after Vladimir Lenin during the Soviet era. Today, the square is described as one of the finest central squares created anywhere in the world during the 20th century, and is an important civic space for the Armenian people.

Outside Yerevan on your travel to Armenia, visit Lake Sevan, the largest body of water in Armenia and the Caucasus region. This gorgeous freshwater lake is located in Gegharkunik Province, which is twice as high in elevation as Yerevan, a perfect sanctuary from the summer heat. Remnants of the 9th Century Sevan Monastery (Sevanavank) sit on a peninsula that was once an island in this lake. The island transformed into a peninsula following the lake’s artificial draining under Joseph Stalin.

The medieval Noratus Cemetery contains the largest cluster of khachkars in Armenia. Each of the 50,000 khachkar in Armenia has its own pattern; no two are alike. The symbolism and craftmanship of the khachkars have been inscribed in the UNESCO list of Intangible Cultural Heritage of Humanity since 2010.

Khor Virap Monastery (‘khor virap’ is Armenian for ‘deep dungeon’) is located on a small hill surrounded by green lands and vineyards, with the stunning Mount Ararat as its backdrop. Originally a prison site, Khor Virap was where Grigor Lusavorich, later Saint Gregory the Illuminator, was held for 13 years, imprisoned by the Arsacid King Tiridates III for preaching Christianity. He survived his ordeal and later became the king’s religious mentor, converting him—and therefore Armenia—to Christianity. A chapel was built in 642 AD and Khor Virap became an important pilgrimage site. Regular church services are still held here and the view of Mount Ararat is not to be missed.

The Echmiadzin Cathedral, built in the early fourth century over a pagan temple, is considered the oldest cathedral in the world. It is the holy seat of the Catholicos of All Armenians, the spiritual leader of the Armenian Apostolic Church. As the earliest known domed church, the cathedral’s architecture exerted profound influence on Christian architecture. The church’s exterior features carved reliefs and ornaments, and the interior showcases a painted dome and frescoes depicting scenes from the Old Testament. It is listed as a UNESCO World Heritage Site.

Survivors of the Armenian genocide formed a vast, global diaspora, mixing their food traditions with the cuisine of their new countries. This means ‘Armenian food’ outside of Armenia may be different from what is served in Armenian homes. Village homes often have an oven called a tonir where tonir lavash (flatbread) and a sweet bread called gata are made. Pork barbecue (called khorovat, or shish kebab in the diaspora) are cooked suspended over coals. Manti is a traditional Armenian dish consisting of a spiced meat mixture wrapped in dough and served with yogurt.