In this post, we will look at examples of Armenia’s buildings and building design before and after its conversion to Christianity. These buildings represent some of Armenia’s most significant destinations and they are often as physically beautiful as they are riveting. If you’re planning to travel here, an insight into Armenian history can give you a sense of how religion has shaped one of the oldest civilisations in the world.

Grigor Lusavorich, later Saint Gregory the Illuminator, was born and raised a Christian in Cappadocia (present-day Kayseri, Turkey). As a palace functionary in Armenia, Grigor refused to participate in the rites of the dominant pagan religion at the time. Tiridates III (or Trdat III), the great Arsacid king who united Armenia, threw Grigor into Khor Virap (“deep dungeon”). He would be held in this dungeon for 13 years but he survived his ordeal and later became the king’s religious mentor, converting him—and therefore Armenia—to Christianity. Other accounts say Tiridates III chose Christianity as the state religion in an effort to distance the nation from both Persian Zoroastrianism and Roman polytheism–at the time the two main competing empires and religions.

In any case, when Tiridates III converted to Christianity on 301 AD, Grigor became the first Armenian spiritual leader (Catholicos of All Armenians), and Armenia became the first Christian nation in the world.

Tiridates III, wanting to be thorough, also had the old pagan temples torn down, a state-sponsored destruction that would have an incredible and lasting effect on Armenia’s architecture.

The oldest known ancestors of modern Armenians are the Hayasa-Azzi, an indigenous tribe which settled in the lands around Mount Ararat – Mt Ararat is a dormant compound volcano in the extreme east of Turkey. The Hayasa-Azzi mixed with other local tribes, which would eventually lead to the founding of the Kingdom of Urartu (Assyrian for “Ararat”) in the 9th Century BC, composed of the smaller kingdoms across Armenia, eastern Turkey, and northwestern Iran.

In 8th Century BC, the Urartian king Argishti I founded the city of Erebuni, which is today’s Armenian capital, Yerevan. (Read more ancient Armenia here. You may also click here to read more about the Caucasus region covering the linked histories of Armenia, Azerbaijan, and Georgia.)

Taking a stroll around Yerevan today is one way to visually explore Armenia’s fascinating past. The ruins of Erebuni’s palace-fortress can still be found on top of the hill of Arin Berd (“Fortress of Blood”), a fifteen-minute drive from Republic Square, Yerevan’s central town square. Like most citadels, the Erebuni Fortress was built on top of the hill to provide a good vantage point over the town and the roads leading to the fortress. Excavations began in the 1950s and are still ongoing. Within the fortress, various chambers have been reconstructed and the frescoes repainted with authentic colours, giving an idea of the figural and decorative art practiced in Armenia in the eighth and seventh centuries B.C.

The wall paintings in the excavated palace and temple show distinct similarities to Assyrian wall paintings, and a columned hall is said to be a forerunner of Achaemenian columned building design. Fragments of murals show religious themes from Armenia’s pagan past and scenes of daily life. An inscription reads: “By the greatness of god Chaldis, Sarduri, son of Argistis, built this house, and he also created these granaries.”

The Urartian Pantheon was headed by a triad made up of Haldi, the supreme god;  Theispas or Teisheba, god of thunder, storms and war; and Shivini, god of the sun. The temple in Erebuni was dedicated to Haldi.

The Temple of Garni is a Greco-Roman temple in Armenia which would have looked more at home in Rome or Athens, thousands of miles away. It is the only pre-Christian building still standing in Armenia today and it is still not known why this temple survived the destruction of pagan monuments under Tiridates III’s regime.

It is equally unclear how the temple came to be. One theory says it was built by Tiridates I, who was crowned by the Roman emperor Nero and who provided him Roman craftsmen and funding to build the fortified city of Garni and this temple, dedicated to the Zoroastrian goddess Mythra (or Armenian Mihr)  later adopted by the Romans as a sun goddess. Another theory says it is not a temple but a tomb of Romanized Armenian kings from the 2nd century.

The temple follows the style of ancient Greek architecture. On both sides of the staircase are pedestals holding sculptures of Atlas, the Greek mythological Titan condemned to hold up the earth and celestial heavens for eternity, and who appears to be holding up the temple itself. The Temple of Garni is popular among travellers and Armenian neopagans, members of a new grassroots religious movement aiming to reclaim pre-Christian Armenian faith. What visitors see today is a reconstruction of the original temple, which was destroyed in a 17th century earthquake.

The archaeological site of Ani is technically in the territory of Turkey (and in 2016 was inscribed under Turkey in the UNESCO list of World Heritage Sites), but “the city of a thousand and one churches” was once ruled by the Bagratid dynasty of Armenia, and served as capital of the Bagratid Kingdom in the 10th century. At its height in the 11th century, when it grew prosperous from control of one branch of the Silk Road, the ancient metropolis served as the home to around 200,000 people. (You may read about the history and legacy of the Silk Road in this article). It served as a peaceful “buffer state” between the Byzantine Empire and the Abbasid Caliphate, but later fell under foreign rule. The invasion by the Mongol Empire, a 14th century earthquake, and the decline of the Silk Road spelled the end of the city.

Ani lies on the eastern end of modern-day Turkey, on the Akhurian River which serves as a natural modern border between Turkey and Armenia. Left to deteriorate for nearly a century due to the conflict between the two republics, Ani is still a remarkably intact “ghost city”, a testament to the quality of Armenian stonework.

Taking a wander around Ani can provide an insight into the evolution of medieval architecture and the amalgamation of architectural and religious influences.

According to Armenia: Art, Religion, and Trade in the Middle Ages edited by Helen C. Evans (published by the Metropolitan Museum of Art and distributed by Yale University Press), among the preserved structures in the triangular site of Ani are a cathedral (built circa 1001), three churches dedicated to St Gregory the Illuminator, a mosque, residential and commercial structures, baths, dovecotes (free-standing structures meant to house doves or pigeons), and the 10th century fortifications built by King Smbat II.

The cathedral of Ani was the seat of the Catholicos for nearly fifty years, until it was converted into a mosque under the Seljuks. It was converted back into an Armenian church, but its dome collapsed during the earthquake in 1319 that damaged many of Ani’s structures. It is considered a valuable piece of architecture as its design, such as its use of pointed arches, may have influenced Gothic architecture.

As the first nation in the world to acknowledge Christianity as the state religion, Armenia has a huge number of Christian structures, many of them built over the pagan temples that were ordered to be destroyed by Tiridates III.

Armenia’s Echmiadzin Cathedral (also spelled “Etchmiadzin”), built in the early fourth century (or around the time Tiridates III converted to Christianity), is considered the oldest cathedral in the world. Its design was said to have come to St Gregory the Illuminator in a vision.

Built on top of a pagan temple, it serves as the holy seat of the Catholicos. As the earliest known domed church with a cruciform plan (shaped like a cross), the cathedral’s architecture exerted profound influence on Christian architecture. The church’s exterior features carved reliefs and ornaments and the interior showcases a painted dome and frescoes depicting scenes from the Old Testament. It is listed as a UNESCO World Heritage Site.

Initially grouped with the Metropolitan Church of Caesaria of Roman-controlled Cappadocia, the Armenian Church asserted its autonomy in the early fifth century, and separated from the Catholic Church after the Council of Chalcedon (451), which established the dual nature (human and divine) of Christ. The Armenian Church sees Christ as being of one incarnate nature, where both divine and human nature are united.

Armenian religious architecture reached its golden age in the sixth and seventh centuries, with the construction of incredible monasteries in the mountains. A monastery rose in Khor Virap, once the site of St Gregory’s imprisonment.

Armenia’s religious aesthetic can be seen in the khachkars, also known as the Armenian cross-stones, carved memorial stone slabs bearing a cross and other intricate detail such as rosettes or carvings of animals. Each of the 50,000 khachkar in Armenia has its own pattern; no two are alike. The deep symbolism and magnificent craftmanship of the khachkars have been inscribed in the UNESCO list of Intangible Cultural Heritage of Humanity since 2010. 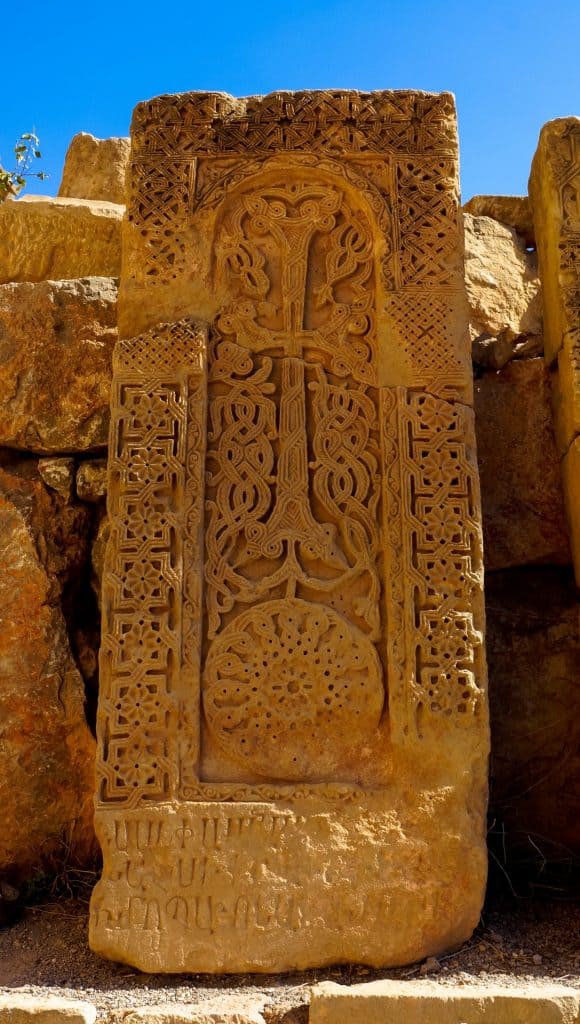 If you want to learn more about the architecture of Armenia, consider joining Odyssey Traveller’s small-group tours to Armenia and nearby countries, designed for the active senior traveller.

Armenia’s rich history and amazing architecture is worth discovering. Sign up now for an escorted tour, and please don’t hesitate to call or email if you have any enquiries. 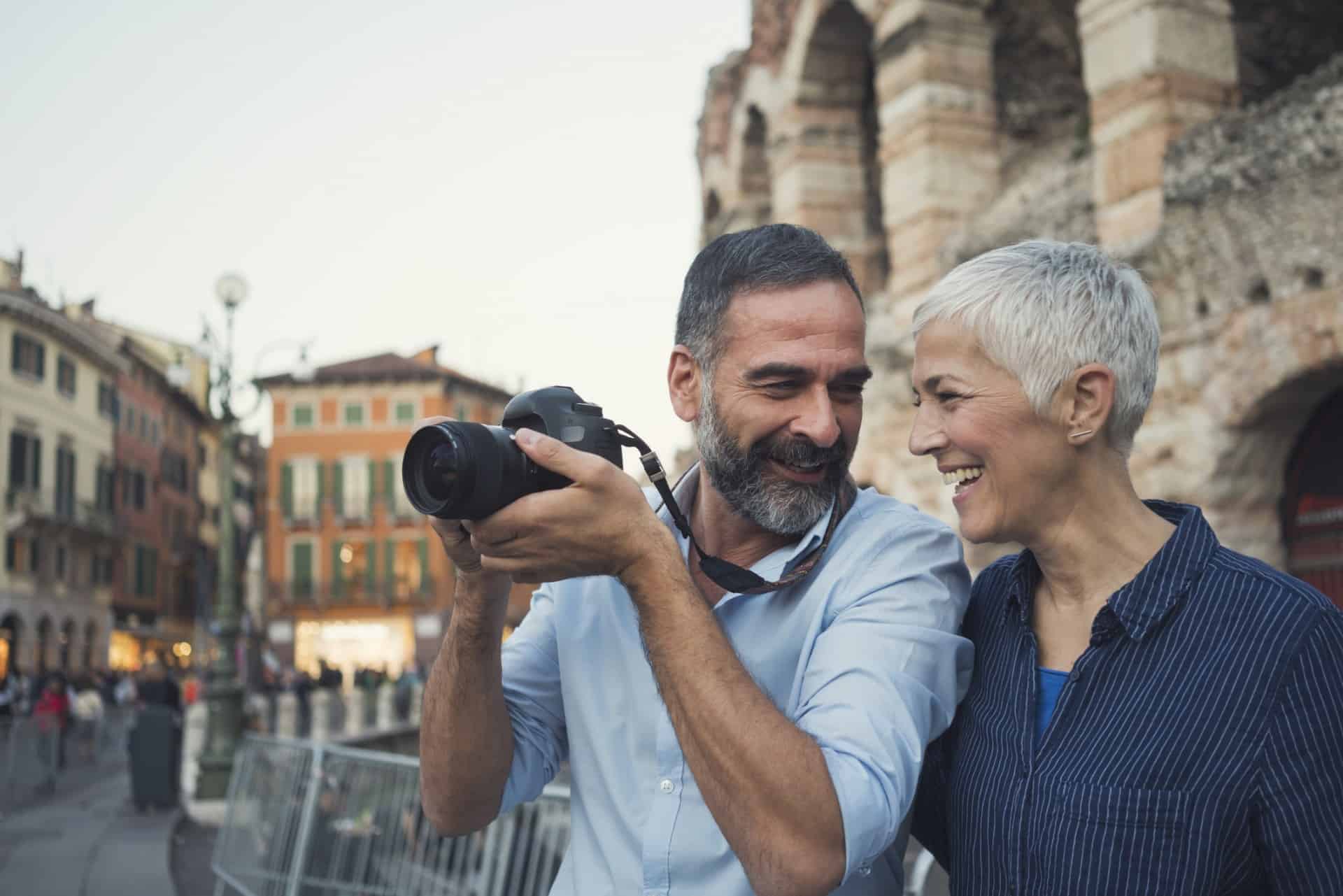 Odyssey Traveller is committed to charitable activities that support the environment and cultural development of Australian and New Zealand communities. We specialise in educational small group tours for seniors, both couples and solo travellers. Typically groups range between six to 15 people, with the help of local guides. Everywhere we visit, we will make sure you are not only informed and engaged but that you have access to comfortable accommodation and the opportunity to try delicious cuisine. Odyssey Traveller has been offering this style of adventure and educational programs since 1983.