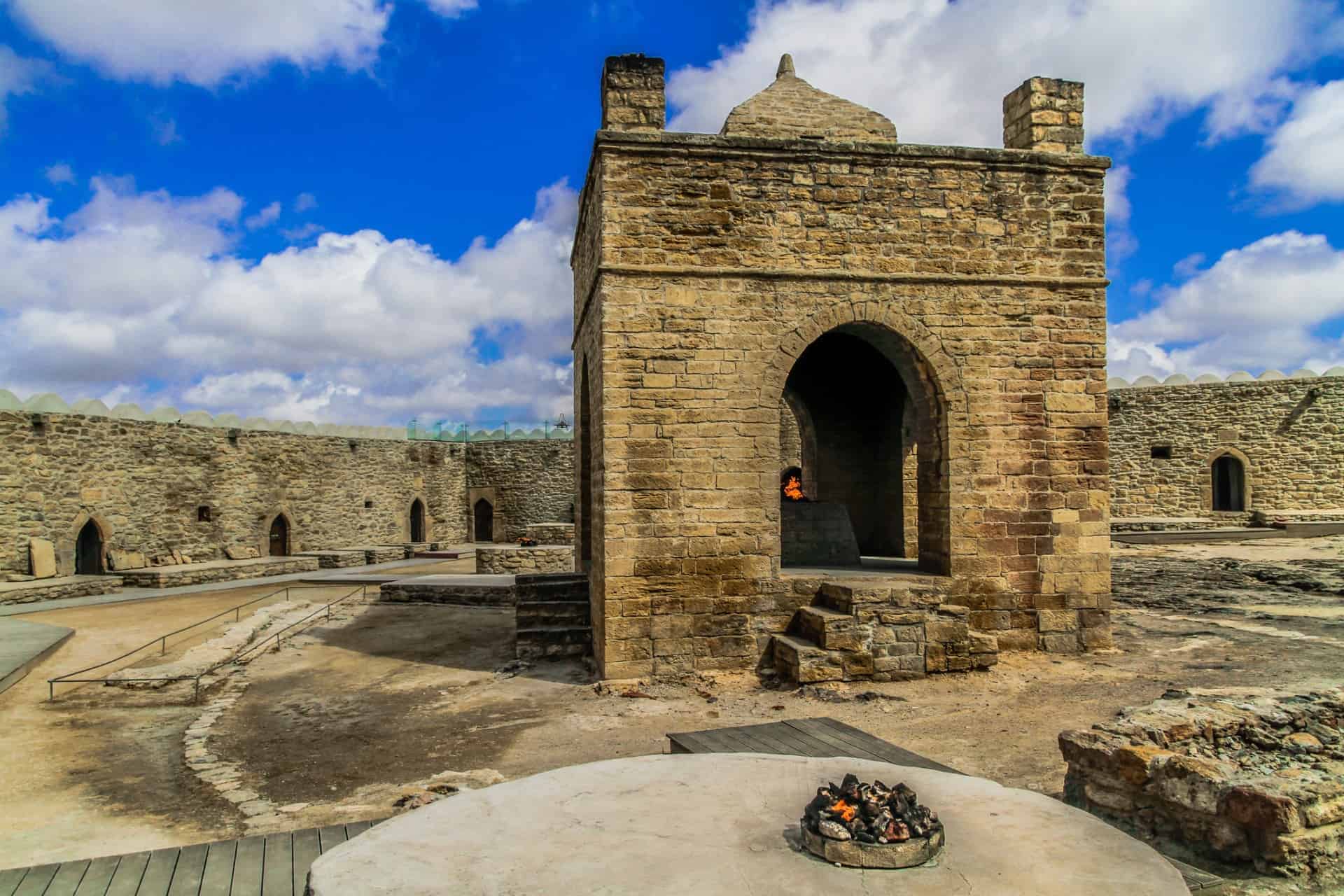 ‘Azer’ in Persian means fire and Azerbaijan’s nickname is ‘the Land of Fire’. Zoroastrianism, the main religion during Persian rule, puts great importance on fire, which is believed to be a source of knowledge. We now know that the country’s vast oil and natural gas reserves are responsible for the seemingly ever-burning flames that define Azerbaijan’s landscape, but during ancient times, the flames made Azerbaijan a famous place of great mystery and a place of pilgrimage.

Travellers can go to the Absheron Peninsula and see the pentagon shaped complex of Ateshgah (Ateşgah; Fire Temple) of Baku, a pilgrimage site and Zoroastrian place of worship, particularly for the Indian subcontinent. According to Persian inscriptions found on the temple, it was also a sacred place for Hindu and Sikh worshippers. One inscription shows an inscribed invocation for Lord Shiva, the Hindu god of destruction and creation, and his son, Ganesha.

Historical sources and religious scholars are still unclear regarding the temple’s true origins—whether it started out as a Hindu, Sikh, or Zoroastrian temple, as fire is considered sacred in all three religions. It is believed it was the site of an ancient Zoroastrian temple that pre-dated Ateshgah, until the ancient place of worship was destroyed by invading Islamic armies and the Zoroastrian religion declined with the introduction of Islam. The structure is topped by a trident, a Hindu sacred symbol, but the trident is also identified as a Zoroastrian symbol.

Ateshgah was built around the 17th century right on top of a natural gas vent. Roman records from 2500 years ago indicate that oil extraction took place on the peninsula. Unfortunately due to exploitation the natural gas reserves ran out, and the once eternal flame of the burning natural gas was extinguished in 1969. The flames that travellers see today are fed by Baku’s main gas supply.

The complex is surrounded by 24 cells and rooms, built in the style of a caravanserai or roadside inn constructed for traders and travellers on the Silk Road. These rooms have been used by pilgrims, merchants, and Hindu ascetics. It fell out of use with the development of surrounding oil fields, and was turned into a museum in 1975. In 1998, it was nominated as a UNESCO World Heritage Site and in 2007 was included in the architectural and historical heritage list of Azerbaijan.