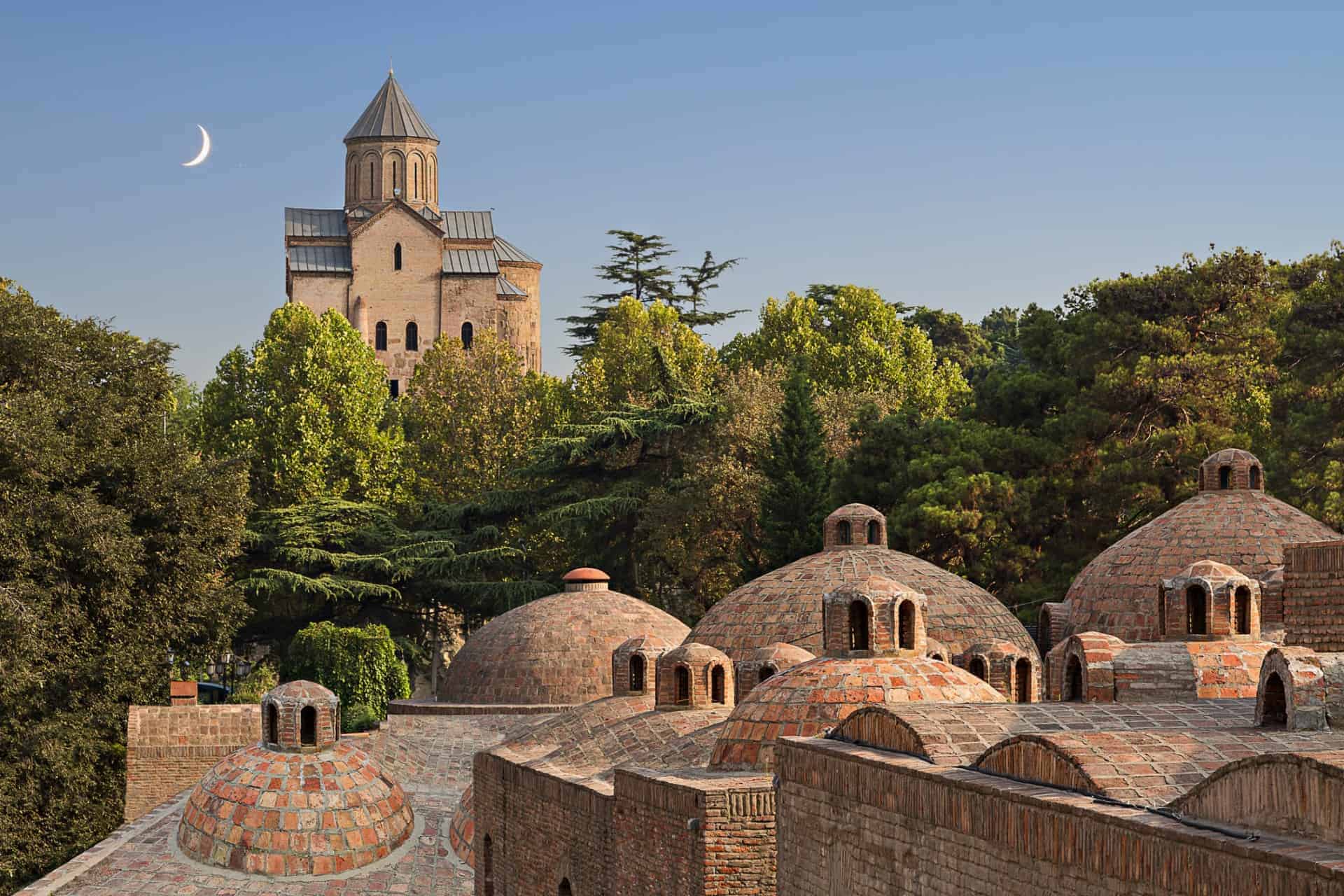 Tbilisi, the capital of Georgia, was recently voted third best place to travel to Europe—trailing only Colmar, France and Athens, Greece—by more than 600,000 people in a 2020 survey run by European Best Destinations. The travel website devoted to promoting culture and tourism in Europe said Tbilisi “is the ideal destination for culture, gastronomy, diversity and architecture lovers.”

The city’s Old Tbilisi, currently a tentative UNESCO World Heritage Site, is famous for its amazing sulfur baths, a perfect stop on a walking tour or day tour of the historic old town, especially during the colder months of October to March. The city itself (Tbilisi means “warm place”) was built around these natural thermal springs, which were believed to have healing properties. Travellers are enticed to have a soak and cure skin problems, joint pains, and other ailments.

The Narikala Fortress, dating back to the 4th century, sits on a steep hill and can be seen from any point of Old Tbilisi. Travellers who are able can climb to the top and view the city from the ancient battlements. Guests can also take a cable car from Rike Park on the left side of the Mtkvari river up to the fortress. The fortress stood as a witness to the city’s beginnings and had been expanded by Georgia’s invaders, the Arabs (circa 7th century) and the Mongols (circa 11th century). The lower part of the fortress has the St. Nicholas Church which dates back to the 12th century.

Anchiskhati Basilica is the oldest surviving church in Tbilisi and one of its most beautiful. It dates back to the sixth century and its design differs from the architecture seen in later temples. There are some breathtaking frescoes to be seen inside the church, some dating back almost 400 years.

Walk down Rustaveli Avenue, Tbilisi’s main thoroughfare, named after the Georgian poet, Shota Rustaveli. At the eastern end of the avenue is Freedom Square, which was named Lenin Square during Georgia’s Soviet era. Several important buildings flank the avenue, including the former Parliament building of Georgia, the Georgian National Opera Theatre, the Rustaveli State Academic Theatre, the Georgian Academy of Sciences, and Kashveti Church. Also on the avenue is the Museum of Georgia, which contains an impressive collection of pre-Christian artefacts dating back to the 3rd millennium BC, including gold from the ancient kingdom of Colchis, which once ruled what is now western Georgia.

For something completely different but just as thought-provoking, travellers may trace the ‘ugly walk’ tour in Tbilisi, organised by the group Iare Pekhit in an effort to show how unplanned urban development spurred by corrupt government deals and privatisation of private land negatively affects Georgia’s citizens, heritage, and environment. This November 2018 Guardian article by Oliver Wainwright points out the architectural projects of Georgia’s former president Mikheil Saakashvili (who was President from 2004 to 2013 and faces criminal charges): the public service hall, the Bridge of Peace, and the unfinished concert hall and exhibition centre.

A day tour from Tbilisi can be a visit to the Gelati Monastery, commissioned by Georgia’s great king David the Builder and which offers a glimpse of the grandeur of Georgia’s golden age. It is a UNESCO World Heritage Site. According to UNESCO, the main church of the monastic complex ‘is the only medieval monument in the larger historic region of Eastern Asia Minor and the Caucasus that still has well-preserved mosaic decoration, comparable with the best Byzantine mosaics.’

David the Builder envisioned Gelati to be a centre of science and education. In addition to the monastery, he also established an academy that gathered philosophers and other intellectuals, as well as a scriptorium where monastic scribes copied manuscripts, including a 12th century gospel that is now housed in the National Centre of Manuscripts.

Mestia is also a highlight for travellers. The main regional centre of Upper Svaneti, Mestia is located about 500 km from Tbilisi and sits around 1700 above sea level. This is often the starting point for travellers who want to explore Svaneti and go further up to the glaciers of Mt. Ushba. Visitors can also go skiing in the many elegant ski resorts in the region. Skiing is also a possibility in Georgia’ east. Gudauri Ski Resort in the Stepantsminda District is the biggest in Georgia and offers a great opportunity to see true mountain wilderness.

On the coast of the Black Sea sits the seaside town of Batumi. Travellers can take a walk down Batumi Boulevard, which dates back to 1881. The boulevard has a park with modern sculptures, beach bars, cafes, and restaurants. Here stands the Batumi Ferris Wheel, as well as the Alphabet Tower, a 145m-high monument to Georgian script and culture and Batumi Tower, which, at 200 metres, is Georgia’s tallest building. The facade of the Batumi Tower features its own miniature Ferris wheel.

Georgia’s Kakheti region is famous for its vineyards, and travellers can join wine tasting tours to learn more about a wine-making tradition that dates as far back as 8,000 years ago, while also sampling Georgian wine. Georgians still use the traditional Qvevri method, where grapes are pressed and transferred to large egg-shaped earthenware pots (called the qvevri), which are then sealed and buried underground to ferment for up to six months. This traditional method of wine-making is passed down through the generations. In 2013, it was inscribed on the UNESCO Representative List of the Intangible Cultural Heritage of Humanity.

Travellers should not miss Georgian cuisine, unique to the region but also influenced by Eastern Europe, the Middle East, and its neighbouring countries in the Caucasus. Bread is a staple in Georgian dishes. Khinkali or Georgian dumplings is a traditional dish made of twisted dough stuffed with meat and spices, and Khachapuri or Georgian Cheese Bread is cheese-stuffed bread but can also be egg-topped like the variant Adjarian khachapuri.