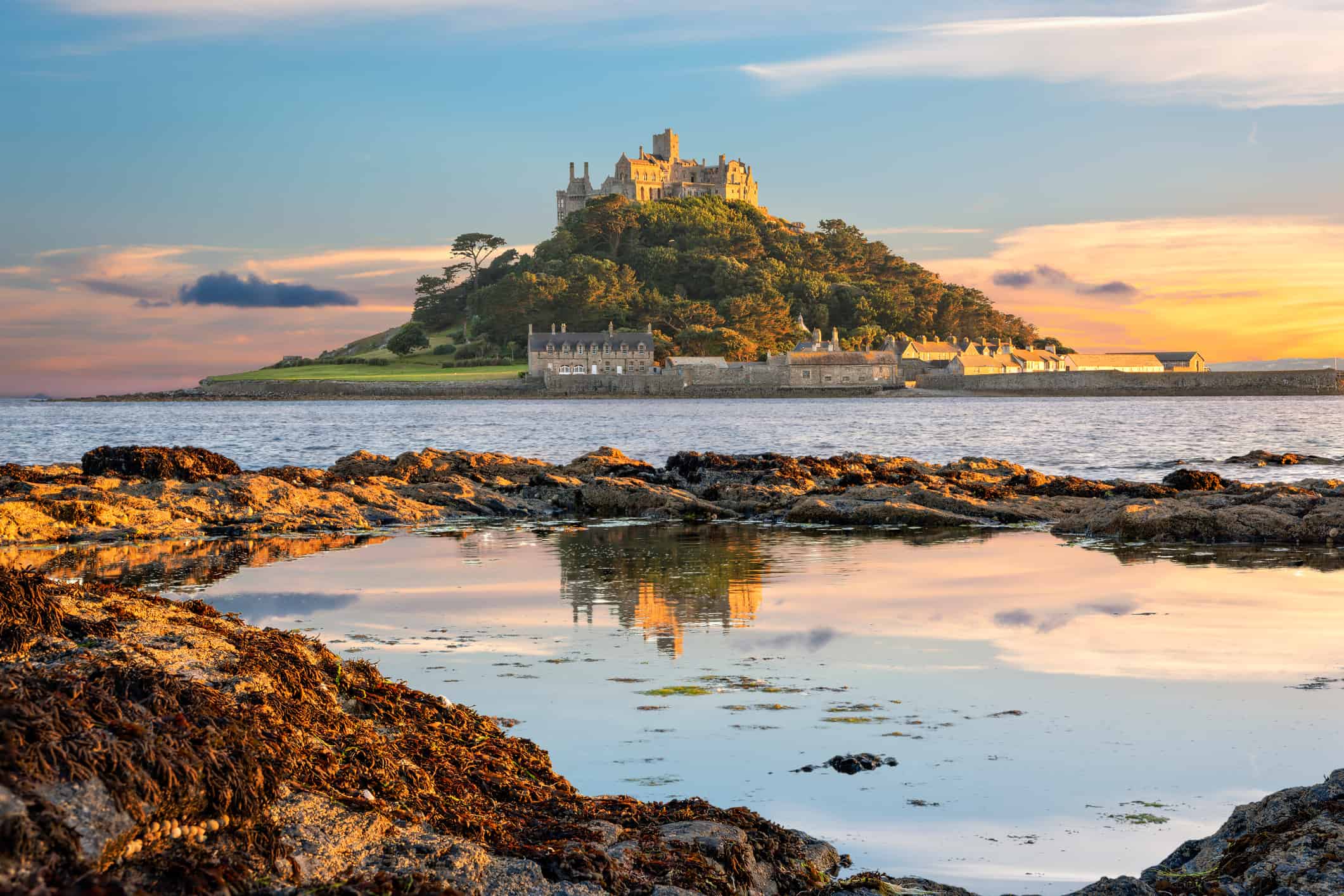 Odyssey Traveller visits St Michael’s Mount as part of our tour of Devon and Cornwall. Located in the far south-west of England, Devon and Cornwall are shaped by a long history and distinctive culture. Our tours offer an authentic experience of the unique Celtic culture of Cornwall, considered by many to be a distinct nation in its own right, and delve into the history and myths of this atmospheric region, heading to Tintagel Castle on the North Cornish Coast, held in the legends of King Arthur to be the mythical king’s birthplace, and Glastonbury Tor, associated with Celtic mythology.

From the moorlands of North Devon to the granite cliffs of Cornwall, Cornwall and Devon offer some of the most dramatic scenery in England. Our tour takes you through charming country lanes, to the quaint village of Lynton and Lynmouth, and through seaside towns such as Falmouth. We head to the Isles of Scilly, an archipelago off the west coast of Cornwall, where subtropical plants are grown in the remarkable Tresco Abbey Gardens. We also visit the iconic Land’s End headland, which marks the most westerly point in England.

We spend nights in Exeter, St Austell, Penzance, Newquay, Lynton, and Hugh Town as we wind our way around the magnificent Cornish coastline.

Odyssey Traveller has been serving global travellers since 1983. Each of our tours is designed for active and curious mature travellers, the kind of people who travel to learn about the history, culture, and architecture of their destination. We travel in small groups of around six to twelve, led by an experienced travel director and supported by local guides chosen for their expertise.

The cost of an Odyssey tour includes all nights accommodation, travel in a comfortable modern coach, admission to attractions, and the majority of meals. If that appeals to you, click here to learn more and here to make a booking.

Much like Mont-St-Michel, St Michael’s Mount is located on a tidal island – in Mount’s Bay overlooking the town of Penzance – connected to the mainland via tidal flats at low tide.

Legends associated the site with the Archangel Michael going back to the Dark Ages. Tales of seafarers lured onto the rocks by mermaids, then saved by the Archangel Michael, the patron saint of fishermen, date back as early as 490AD. Ever since, Christian monks and pilgrims have come to the island to pray and celebrate their faith. Historians have suggested that the island was the site of a monastery from the 8th century to the 11th century AD.

The penultimate pre-Norman English King, Edward the Confessor, gifted the island to the monks of Mont-St-Michel, France, who built the chapel associated with today’s castle. The island remained in hands of the Benedictine monks until the Hundred Years War, during which Henry V gave the priory to the Abbess of Syon, a Bridgittine Order located in Middlesex County, and one of the richest religious orders in England.

During the English Reformation, the governor of the island, Sir Humphrey Arundell, was a leader of the Prayer Book Rebellion, a Cornwall and Devon-based revolt against the English-language Book of Common Prayer. Queen Elizabeth I gave the Mount to her favoured advisor, Robert Cecil.

The Mount has weathered a number of conflicts. The castle was held by the Earl of Oxford during the Wars of the Roses, and was a Royalist stronghold during the English Civil War. The top of the church tower was lit as the first beacon to warn England of the approaching Spanish Armada, while cannons on the top of the castle drove a French warship to capture on the breach during the Napoleonic Wars.

In 1659, the Mount was sold to Colonel John St Aubyn. His son – also called John St Aubyn – was granted a baronetcy, and under the rule of his descendants, the area once again thrived as an important shipping port, until it was overtaken by the coming of the railway to nearby Penzance. In the 1950s, Frances Cecil St Aubyn, Lord St Levan, gave the Mount to the National Trust, though the family retained a 999-year lease in order to keep living in the castle. Today, the St Aubyn family operate the museum in cooperation with the National Trust.

Legends associate Saint Michael’s Mount with the Cornish folk hero, Jack the Giant Killer. Cormoran the Giant, who terrorised the land, made the Mount his home, stealing cattle from local farmers to satisfy his giant appetite. Only Jack, a young boy from Marazion, under the shadow of the Mount, was brave enough to challenge the Giant’s reign of terror. On a moonlight night, he crossed the causeway and blew a horn to lure the Giant out. Little does the Giant know that Jack has laid a trap – a deep pit – into which the Giant falls. As the result of his heroism, Jack receives the Giant’s wealth and lives on to become a professional giant-slayer, famed across the nation, one of the heroes of the reign of King Arthur.

St Michael’s Mount remains a living community, with at least thirty people living on the island. Though humans have likely lived on the island since ancient times, when the island provided Cornish tin to Phoenician traders, little is known about early settlements. By the 19th century the village had a population of around 300. The village had a policeman to protect its inhabitants, a school to educate its children, and pubs to serve as a community hub and welcome point for fishermen and sailors. While the community is smaller today, the historic village remains vibrant, with boutiques and eateries targeted at the many visitors to the island.

One of the more astonishing sights of the island is the castle’s garden. While the gusty sea winds and rocky land seem to prohibit the potential of gardening, the Gulf Stream allows for the growth of summer plants such as agave, aloe, and puya. Built by the Baronet for his three daughters in the 1780s, the (sub)tropical gardens are a charming mess of vibrant summer flowers – imported from as far away as Mexico and South Africa – tumbling down among ancient stone paths.

The Mount is easily accessible from the Cornish coast, and open to the public for a small fee. Most visitors journey across Mount’s Bay by boat at high tide, or walk across the causeway at low tide.

A visit to St Michael’s Mount is part of Odyssey Traveller’s guided tour of Cornwall and Devon. For more information, click here. 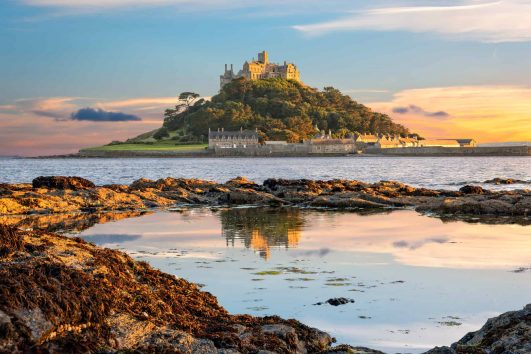 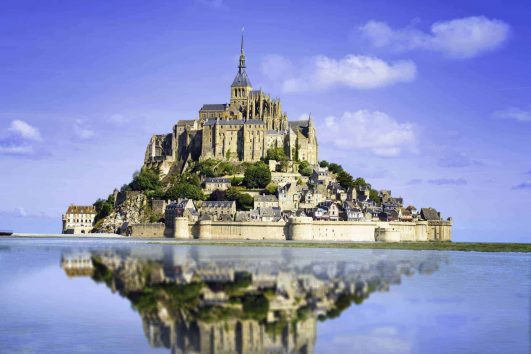 This small group tour for couples and solo travellers is centred on the North West corner of France: Normandy, where the peaceful landscape belies a turbulent past; Brittany, where a strongly separate Celtic culture is still evident; Poitou, famous for its rich farmlands and historic ports; and the Loire Valley, replete with royal châteaux.