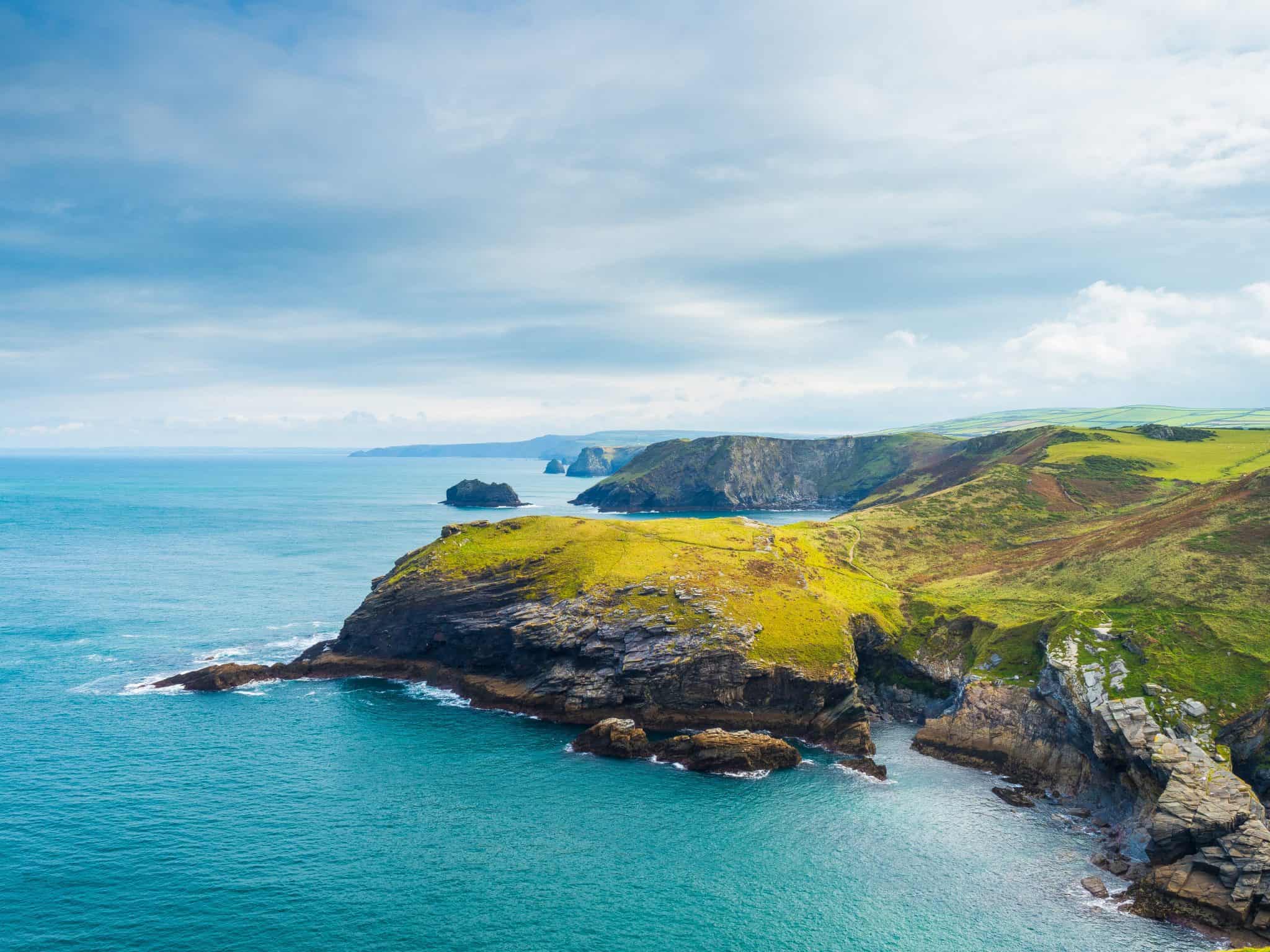 Believed by many to be the home of the legendary King Arthur, Tintagel Castle on the North Cornish Coast is one of the most visited destinations in England, drawing tourists from around the world entranced by medieval lore and magic. Whether or not you believe the myths, it’s easy to see why atmospheric Tintagel Castle – the ruins of which span from the mainland onto a rocky outcrop in the Atlantic Sea – has inspired romantics for more than a thousand years.

Odyssey Traveller makes a day tour of Tintagel Castle as part of our tour of Devon and Cornwall. Beginning and ending in the city of Bristol, our group tour focuses on the unique Celtic culture of Cornwall, and the long history of Britain’s remote south-west.

Cornwall and Devon offer some of England’s most stunning and varied scenery, from the granite headland of Land’s End, to the moors of North Devon, to the subtropical Tresco Abbey Gardens of the Isles of Scilly. The region is packed with charming seaside towns, all country lanes and fishing boats, including Falmouth, St Austell, and a quaint village with the equally quaint name of Mousehole.

Since 1983, Odyssey Traveller has designed educational tours for mature and senior travellers. Our tours aim to give you an authentic sense of place by delving into the history, art, and culture of our destination. With between 6 and 12 passengers per tour, we genuinely offer small group tours, led by an expert travel director and local guides chosen for their expertise. Our tour price includes accommodation, admission to attractions, tipping, and the majority of meals. For more information, click here, and head to this page to make a booking.

The history of Tintagel predates the legend of King Arthur. While archeologists and historians debate the extent of Roman activity in the era, Roman markings on Tintagel and at a nearby church, and Roman coins found in the area, indicate that there was some Roman presence.

Tintagel – like most of Cornwall – would thrive in the post-Roman period. The headland was covered in small rectangular buildings, protected – perhaps from Irish colonists, who had settled on land in Cornwall at the time – by a deep land bank and ditch. Archaeologists and historians have suggested that the site was probably one of several royal sites of the Kings of Dumnonia (roughly equivalent to contemporary Devon and Cornwall). English kingship at the time was peripatetic, with the royal court moving from place to place with the season. If Tintagel was a royal site, between one hundred and three hundred people – the King and family, dependents, officials, servants and private militia – would have resided there during peak season.

The many remnants since found at Tintagel are a testament to the prosperity and influence of Dumnonia. The site was integrated into a trading network that spanned the Mediterranean, trading valuable Cornish tin in exchange for luxury tableware from France, Spain, and as far afield as contemporary Turkey and Tunisia.

In 2018, a stone inscribed with Christian symbols and Latin and Greek writing, dating from the 7th century was discovered at Tintagel. The stone gives further credence to the theory that Tintagel was a royal residence. Writing in the 7th century was a privileged pursuit, practiced by scribes associated with royal courts and the church. The discovery indicates that Tintagel was an important site of Christian learning, part of a cultural sphere that spanned to the Mediterranean. Names inscribed on the stone, including the Roman ‘Tito’, and the Celtic ‘Budic’, indicate a thriving multi-cultural community.

After the mid-7th century, physical evidence of life on the headland vanishes. However, cultural memory of the rich kingdom of Dumnonia persist. Perhaps owing to these legacies, Tintagel would again rise to fame in the 12th century, when the cleric and historian Geoffrey of Monmouth claimed that Tintagel was the place of conception of the legendary King Arthur in his The History of the Kings of Britain. Believed to be an accurate historical source in the Middle Ages, Monmouth’s history is now read primarily as a vibrant source of myth and legend that shaped our conceptions of the King Arthur myths.

Aspects of the King Arthur cycle of legends, known as the ‘matter of Britain’ had predated Geoffrey, appearing in Welsh and Breton legend and poetry, sometimes translated and included within Latin writing. Geoffrey’s account nonetheless essentially created Arthurian legend in its classic form, introducing a number of key themes and characters: the sorcerer Merlin and the villainous Mordred.

Geoffrey’s version was the first to associate Arthur with Tintagel. In his telling, King Arthur’s father, Uther Pendragon, used the magical assistance of Merlin to impregnate Igraine, the wife of the Duke of Cornwall. Inspired by the dramatic natural setting, Geoffrey described Tintagel extensively in the text.

The History of the Kings of Britain was the medieval equivalent of a bestseller, inspiring numerous adaptations in the form of chivalric poetry all over Europe, particularly France. The legend of King Arthur exerted a powerful pull over the kings and royals of later medieval England. Further romantic associations were given to the site of Tintagel in the legends of Tristan and Iseult (or Tristan and Isolde), a French and German cycle of poems (with likely Cornish origins) about the adulterous and doomed love between the Cornish knight Tristan and the Irish princess Iseult. Tintagel was associated with the court of Mark, King of Cornwall, Tristan’s uncle and Iseult’s husband.

The site’s literary fame likely inspired its next owner, Richard, Earl of Cornwall, the younger brother of King Henry III. In 1225, Richard – one of the wealthiest men in England – made the seemingly strange decision of exchanging three of his manors for a small patch on the rocky Cornish coast, which explicitly included the island of Tintagel. Richard built a modest castle on the island, the remains of which can be seen today.

Historians debate Richard’s decision to build in such a remote location. Some claim that the castle served a political purpose: Richard aimed to endear himself to the people of Cornwall by associating himself with a Cornish folk hero. Others suggest that Richard, like many of his contemporaries, was simply inspired by the Medieval legends that portrayed Arthur as the embodiment of kingly virtue and chivalry, concepts at the heart of medieval culture.

The glory of Richard’s castle would be short-lived: by 1337, when Cornwall was converted from an Earldom to a Duchy, the site was described as ‘ruinous’. However, the legends of Arthur would once again inspire visitors to Tintagel in the 19th century, as medieval lore became hugely popular in the Victorian Era. Tintagel’s fame was spread further