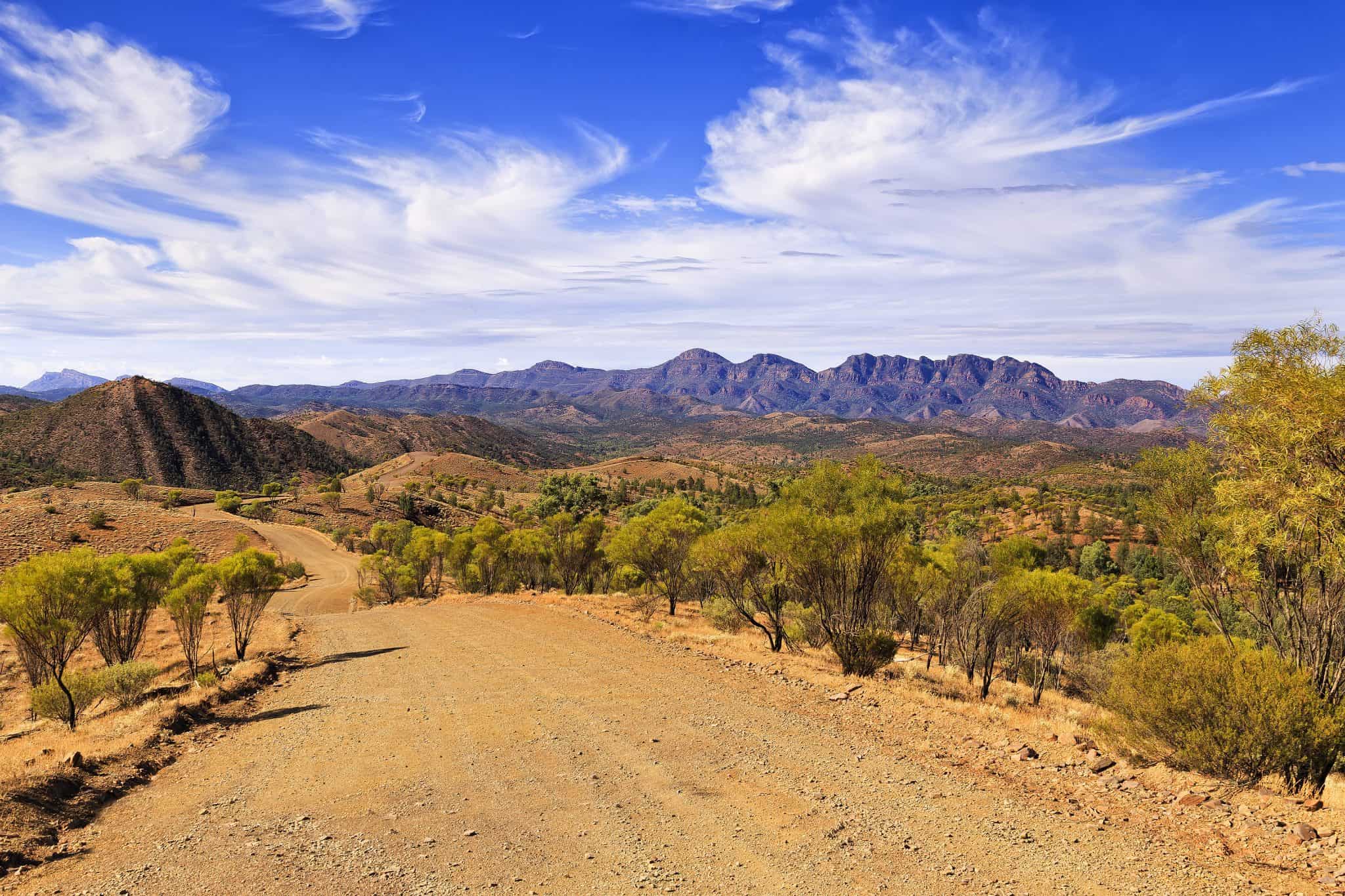 The iconic Flinders Ranges of South Australia have a rich Aboriginal heritage and are home to a number of vitally important cultural sites and ancient artworks.

Odyssey Traveller visits a number of important Aboriginal cultural sites as part of our Tour of the Flinders Ranges. This article – along with our piece on the geology, wildlife, and natural landscape of the Flinders Ranges National Park – is designed to prepare you for the tour by providing background information on some of the places we might visit.

Our outback South Australia tour begins and ends in Adelaide. Our trip takes us to historic Port Augusta on the Spencer Gulf and the quintessential Australian outback towns of Coober Pedy and Woomera. We take a scenic flight over Lake Eyre and the desert landscape of the surrounding national park. Finally, we return to Adelaide through the spectacular rugged mountains of the Flinders Ranges. We visit the Arkaroola Wilderness Sanctuary, learn about fossils and ancient rocks on the Brachina Gorge Geology Trail, and enjoy spectacular views of the Flinders Ranges. The ranges are home to several scenic gorges, including Bunyeroo Gorge, Parachilna Gorge, and Alligator Gorge in the Southern Flinders, and offer a number of walking trails for visitors.

Travellers with an interest in exploring Australia may be interested in checking out some of our other tours, including our Tour of the Kimberley, our Tour of Western Australian Wildflowers and our Outback Queensland Adventure.

When European settlers pushed into the Flinders Ranges in the 1840s, they met with resistance from the Adnyamathanha people. Settlers chose the best areas, with easy access to water, meaning that the local people were now denied the water that had always been available to them. Adnyamathanha people retaliated by stealing the settlers’ sheep – in response, many settlers murdered many of the local people.

At the same time, many Adnyamathanha people found work among the settlers as stockmen and housekeepers. The history of early pastoral life can be explored at the restored Old Wilpena Station. Wilpena Station was a working cattle station for 135 years (closing in 1985) that has since been converted into a museum.

In 2009, the Federal Court recognised that the Adnyamathanha people hold Native Title over much of the ranges. Today, the Ikara Flinders Ranges National Park is co-managed by a board consisting of representatives from the Adnyamathanha and the South Australia Department of Environment, Water, and Natural Resources. Members of the Adnyamathanha play an active role in park management while the Wilpena Pound Resort, a major source of accommodation, is jointly owned by the Adnyamathanha.

The landscape of the Flinders Ranges is weighted with cultural importance for the Adnyamathanha. The natural amphitheatre of mountains at Wilpena Pound – known in Adnyamathanha as Ikara, or ‘meeting place’ – is of great cultural significance. According to local tradition, Wilpena was created in the dreamtime, when two serpents surrounded a hunting party. After a long and brutal fight the hunters killed the serpents, which petrified as the surrounding mountains of the Ikara Flinders. St Mary’s Peak, the highest point of Wilpena Pound, is said to be the head of the male serpent, while Beatrice Hill (the second highest point) is said to be the head of a female serpent. Due to its cultural and religious significance, the Adnyamathanha ask that visitors do not walk to the very top of St Mary’s Peak, but instead stop at Tanderra Saddle, which likewise offers spectacular views.

Some other key sites of cultural interest on the Flinders Range include:

About 17km south of Ikara/Wilpena Pound is Arkaroo Rock, an important site of charcoal and ochre paintings. On the underside of a huge rock, the paintings were probably begun over 6000 years ago, and were not discovered by Europeans until 1957. The paintings depict the Yura Muda or Dreaming (creation story) of Ikara. The name of the rock, ‘Arkaroo’ comes from the name given to the petrified serpents who later became the mountains of Ikara.

Unlike the paintings at Arkaroo Rock, the art of the canyon is engraved directly on to rock.

The site of the engravings is a permanent spring, believed to be the place where the Adnyamathanha people gathered to tell stories and to leave their mark. The engravings are incredibly ancient, possibly 30 to 40 thousand years old.

The artworks likely tell a story, the content of which is now lost. The origins of the engravings remains unknown to the local Adnyamathanha people.

The site can only be accessed with an Adnyamathanha guide through a cultural tour booked at Wilpena Pound Resort. Please show respect for the local people and this incredible legacy, and do not touch the engravings.