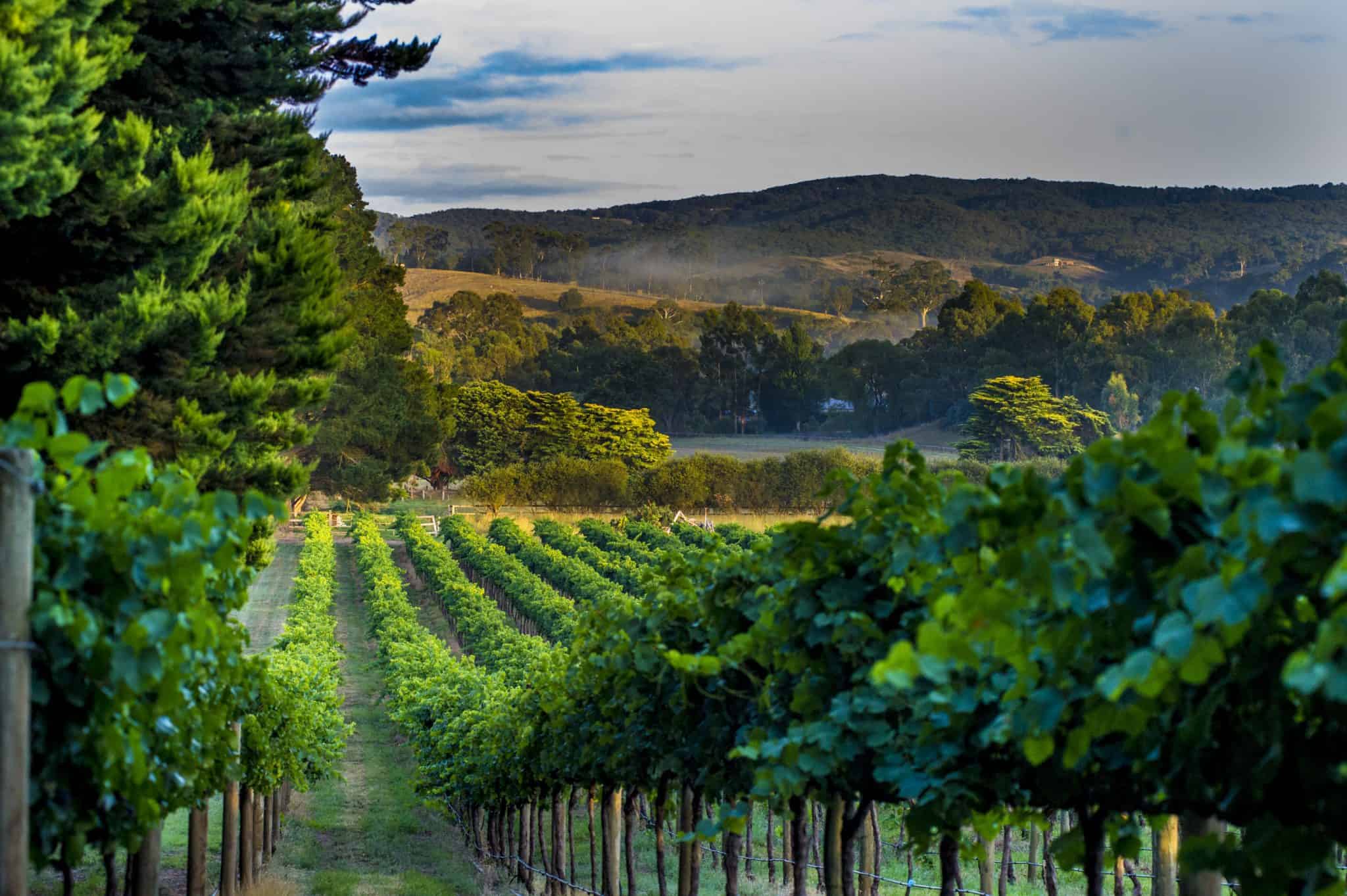 The two major wine-growing regions of South Australia, the Barossa Valley and the McLaren Vale, are among the most historic and acclaimed wine-growing areas in the world.

The Barossa Valley is synonymous with Australian wine for many worldwide, thanks to the celebrated intense and concentrated Shiraz that took the world by storm in the late 1990s.

The Barossa is among Australia’s most historic wine districts, associated with winemaking since European colonisers first reached South Australia in 1836. Even before settlement, the German mineralogist Johannes Menge had reported back to the South Australia that the fertile area north of Adelaide would support ‘vineyards and orchards and immense fields of corn which are matchless in the colony’.

The two most defining figures of the early era of the Barossa were George Fife Angas, an English shipping merchant and chair of the South Australia Company, and August Kavel, a Lutheran Pastor, who sought a place to resettle his flock of Silesian farmers and tradesmen, who were facing religious persecution in their native Prussia. Angas was the largest land-owner in the Barossa Valley and sought to cultivate his 11, 300 hectares by settling ‘solid god-fearing folk, prepared to pass the weekday hours in honest toil and the sabbath in worship of their creator.’ (John Beeston, A Concise History of Australian Wine).

Kavel’s Silesians seemed to embody Angas’s ‘god-fearing folk’, and so Angas helped fund the first three ships from Germany. Kavel was determined that the German community would repay Angas for his support. He encouraged Germans to remain in the settlements, and encouraged the development of joint English/German settlements. Australia’s first bilingual newspaper, the German-Australia Post was published in the Barossa in 1848. The Silesian farmers find the landscape conducive to wine-growing and begin planting vines.

The Barossa still displays this German heritage. Leading Australian wineries such as Jacob’s Creek date back to the early days of German settlement in the Barossa. The villages of Bethany, Langmeil and Krondorf were laid out in a style usual in Eastern Germany, and the many Lutheran church steeples still dot the landscape today.

By the end of the 19th century, the Barossa specialised in fortified wines – sherry, port, muscat, and tokay – popular throughout the British Empire, rather than the table wines it is known for today. By 1929, 25% of Australia’s wine production came from the Barossa Valley.

As Australia’s taste in wine evolved in the 20th century, so did the Barossa. The Barossa Valley developed an international reputation for fruit-forward and vibrant wines, popular with wine critics, sommeliers and amateurs alike. The late 1990s and the early 2000s were the golden age for the Barossa, as ‘intense, concentrated, and heavily naked’ wines became the fashion worldwide. The Barossa reds- particularly Shiraz, Grenache, and red blends, became the most ‘fashionable and highly sought after wines in the world’ (Wine Australia).

Today, winemakers in the Barossa – many of whom are the descendants of early settlers to the valley – are once again revolutionising wine-making, taking inspiration from the lighter wines of the 1960s and 1970s, and planting mediterranean varieties – rather than French – better suited to the home climate of the area. Many wine-makers are also turning towards organic and biodynamic wines.

For a long time lesser-known than the Barossa, the McLaren Vale has an even older history. The first grapes were planted only two years after the establishment of the colony of South Australia in 1836,  early settlers William Colton and Charles Thomas Hewett, John Reynell, and Thomas Hardy – all from Devon, England. Though Devon was hardly a natural wine-growing region, the settlers were intrepid businessmen, and the McLaren Vale had its first full-scale wineries by 1850.

Much like the Barossa Valley, the McLaren Vale switched to making fortified wines in the late 19th century. In the postwar period, many migrants from Italy settled in the McLaren Vale, introducing olive and olive oil production, as well as new vines and modes of production.

Though close in proximity, South Australia’s two major wine regions offer very different products. While the Barossa Valley – to the north of Adelaide – has a continental climate, with great weather extremes-  cold winters and long, hot summer days, the McLaren Vale – set to the south-east on the Fleurieu Peninsula – has a Mediterranean climate, with a warmer, wetter winter and a hot, dry, summer. Situated the near the coast and overlooked by Mount Lofty, the McLaren Vale sees cool breezes in the afternoons and evenings. The result is that, even as both regions specialise in reds such as shiraz, the Barossa offers rich, full-bodied wines, flavoured with dark berry fruits (blackberry) and rich dark chocolate; while the McLaren Vale climate results in softer, more subdued wines, with a twist of light berry and spice.

In the 1970s and 1980s the McLaren Vale’s wines took their place on the world stage. As a wine-growing region, it is defined by its complex climate and geology, allowing the region to support a wide variety of  wines. The McLaren Vale has over 40 separate geological configurations, ranging from yellow clay to lime. The region also has a number of micro and meso climates, thanks to the varied elevations. This has allowed for the growth of a number of vines – shiraz, grenache, and cabernet – and a number of Italian vines including barbera, fiano, Sangiovese, and zinfandel. 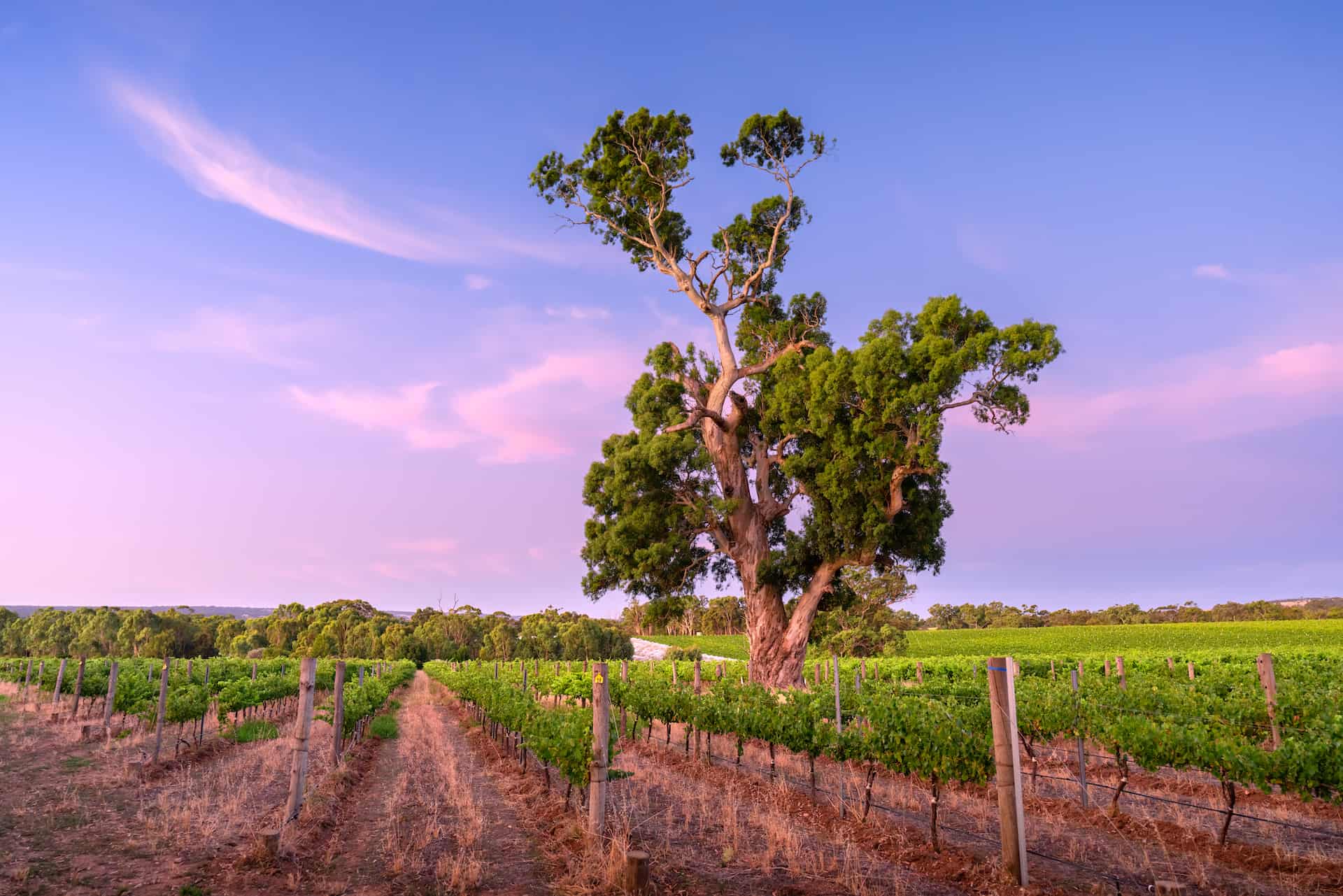 As part of our tour of Adelaide, Odyssey Traveller enjoys day tours to both the Barossa Valley and the McLaren Vale Wine Region, including lunch at a local restaurant and a wine tasting in each region. Staying in hotel accommodation in the city for eight nights, we see the major sites of Adelaide, including the Botanic Garden and the historic buildings of the North Terrace and City Centre, and feast on local produce at the Central Market and Chinatown. A particular Adelaide highlight is the extensive collection of William Morris Arts and Crafts works, collected in the Art Gallery of South Australia. We also head to the museums of Port Adelaide.

Our Adelaide city tour also takes you to the surrounding regions. We make a day trip down the Fleurieu Peninsula, passing through the McLaren Vale and looking out at Kangaroo Island. Our tour also takes a river cruise down the Murray River, and explores the Adelaide Hills, where we visit the historic German settlement of Hahndorf, where we enjoy a tasting of traditional German cuisine.

If you’re interested in a visit to Adelaide city, why not join Odyssey’s guided tour? Every Odyssey tour is designed especially for mature and senior travellers, with a focus on the history and culture of our destinations. We chose every tour guide for their extensive local knowledge, and move in genuinely small groups, of around 6-12 guests per tour. If that appeals to you, click here for more information.