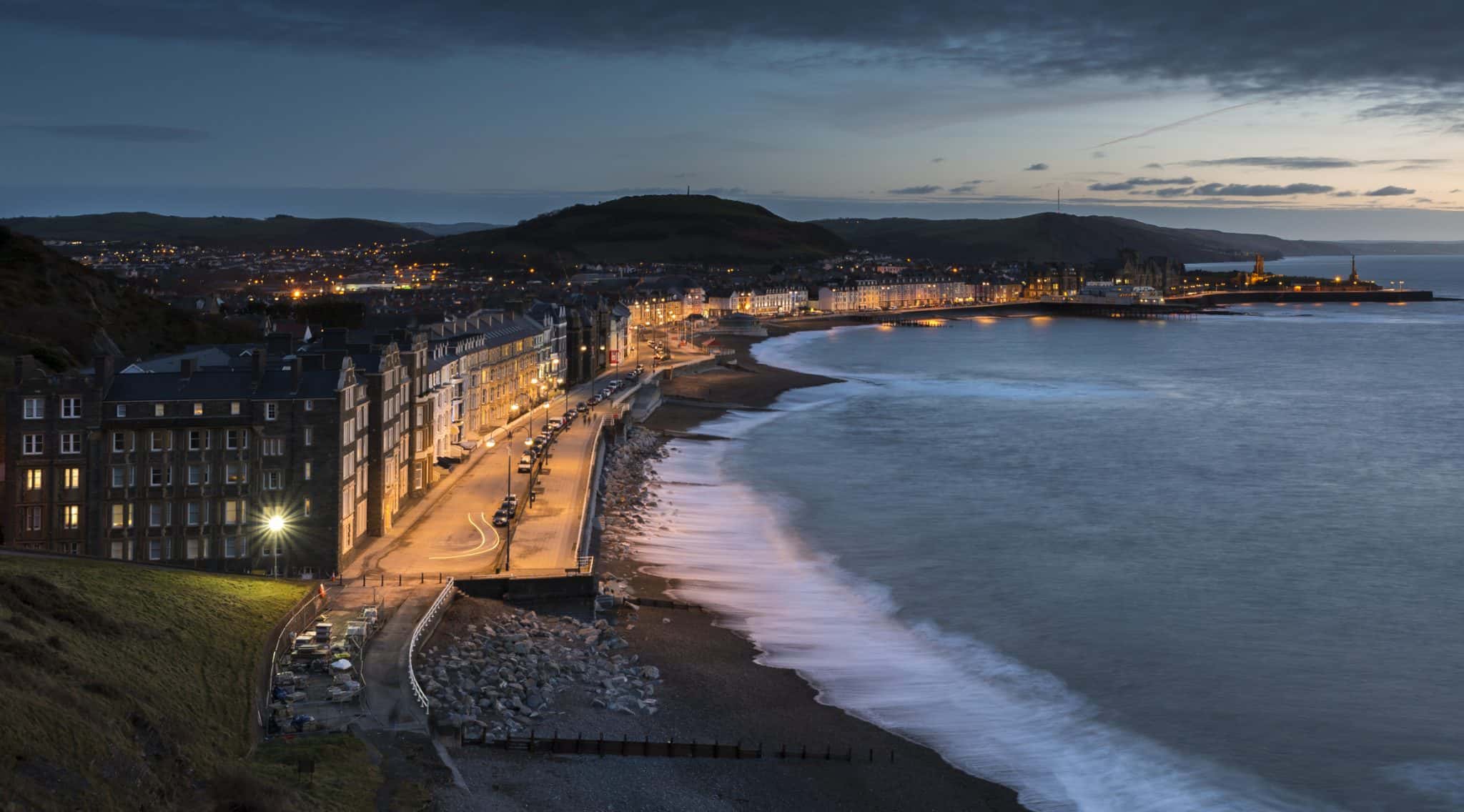 Aberystwyth is a small ancient market town and stunning seaside resort in Ceredigion on the west coast of Wales. Established as a castle town in the Middle Ages, the town has developed over the centuries into first a major port, then a popular tourist destination and centre of culture and education in Wales. This articles traces the history of the town to assist your tour of Aberystwyth.

Archaeological evidence suggests that Iron Age settlers established the site long before the town was built. The remains of a huge Celtic fortress on the hilltop called Pen Dinas overlooking Aberystwyth dates back to before 700 BCE.

The first recorded history was not until centuries later when the first Norman castles were built in the area in the early 12th century. These was later replaced by a castle built by the Welsh led by Llywelyn the Great in 1208 before they withdrew from the area.

It was not until 1277 CE, however, that the town that has since developed into modern Aberystwyth was laid out. On 25 July, Edmund, brother of Edward I, arrived and supervised the construction of a Norman castle and walled town around the castle. The site was chosen given its location on the coast to be easily supplied with building materials and during times of attack.

Like many other Welsh castles, Aberystwyth Castle was captured between 1404 and 1408 by Owain Glyndwr during his revolt against the Kingdom of England, before finally surrendered to Prince Harry (the future King Henry V of England).

In 1649, during the English Civil Wars (1642-1751), Oliver Cromwell’s Parliamentarian troops destroyed much of the castle, so much that it still remains mostly ruined, save portions of three towers.  Following this the town was little more than a small market and fishing village.

But by the 18th century, the fishing industry had developed further, and the booming silver and lead mines created new occupations for the townspeople. The port became the main employer, handling coastal, Irish, and even transatlantic shipping – at once point being the second busiest port in Wales.

The town grew significantly from the late 19th century, spreading northward along the coast especially after the arrival of the railway. First arrived the coastal Cambrian Railway line from Machynlleth in 1864, followed soon after by rail links to Carmarthen. The town’s impressive railway station was built in 1863 for the steam trains.

With the arrival of the railways came a Victorian tourist boom. The town reinvented itself as a fashionable seaside resort destination and quickly developed into what many describe as the cultural capital of Wales.

A number of Victorian and Edwardian hotels and fine townhouses were built including the impressive Queens Hotel. And a large number of cultural institutions followed including the first college of the University of Wales in 1872, followed by the National Library of Wales in 1907. Reflecting its cultural importance, in 1955 the town was placed in running to be the nation’s capital.

Today the historic town of Aberystwyth continues to thrive as a university town, hosting over 9000 students at Aberystwyth University, and as a popular sea-side holiday destination in the summer attracting tourists to relax within its picturesque scenery and at its numerous hotels, cafes, restaurants, bars and pubs.