A surprising symbol of the Industrial Revolution 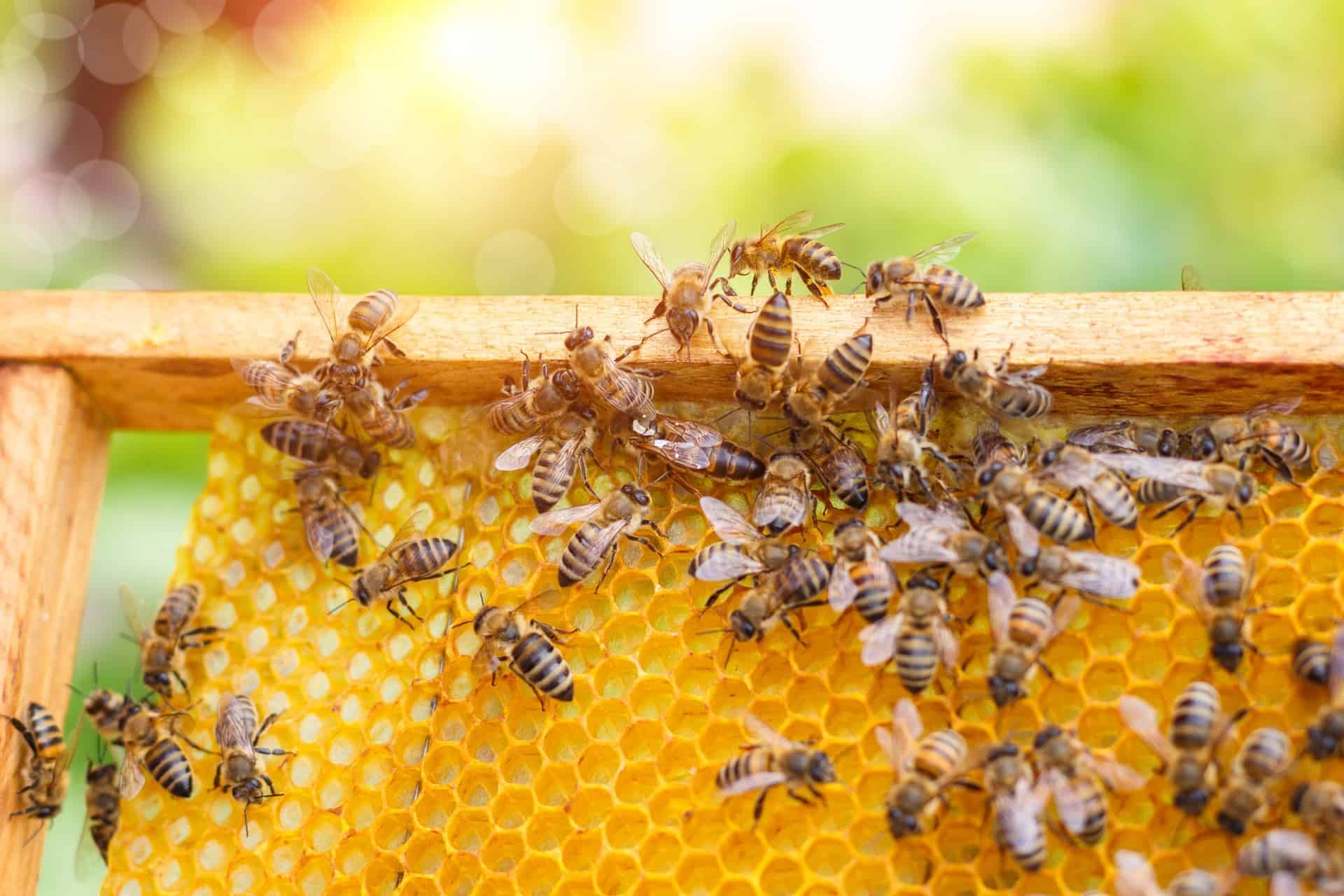 Bees in Manchester: a surprising symbol of the Industrial Revolution

The bee is an intriguing symbol for the city of Manchester. The city’s damp climate provided the ideal conditions for milling cotton. But this is a far cry from the sunshine and flowers usually associated with bee. And yet, the bee is everywhere in Manchester. It can be sighted on buses, rubbish bins, street lights, clocks, buildings, and even t-shirts & mugs. It represents what this city is about, but the question is: what does the bee actually stand for?

Attack of the giant bees

A colony of bees has descended onto Manchester. Some have made themselves at home inside the cavernous Mayfield Depot. Others can be sighted in the streets. “Mini bees” are even clustering in libraries and museums. But before you call an apiarist, these bees are very large, colourful and flightless. They are, in fact, 100 sculptures arranged across Manchester. The identically shaped bees perch on painted hives, and they make for an incredible spectacle. Each individually designed bee reflects aspects of Manchester’s history and identity: its industrial origins, vibrant culture and musical affiliations.

One bee, by artist Sian Bristow, is emblazoned with cartoon-style streets of Manchester, its tightly grouped houses, staircases and train tracks offering a swirling map in pinks and greys. A black, red and white bee by Joseph Venning straddles a soccer-ball hive, and the faces of Manchester United football players cover its body and wings. And another, by artist Lee O’Brien, is called “Queen Bee”. It depicts a somewhat drooping, bug-eyed face of Queen Victoria, a nod to Manchester’s key role in the industrial age.

A symbol of a busy city

The bee holds special significance for Manchester. It is beloved by residents as the city’s symbol and today, you may even find people donning them as tattoos! There are many reasons for Manchester’s affinity for this cute insect. Primarily, it nods to the thriving factories of the 19th century that made Manchester one of Britain’s largest cities. These factories were described as “hives of activity”, and this image sort of stuck. Manchester adopted the symbol of the “busy bee”, and it was officially inscribed in the coat of arms in 1842. Read on to learn more about Manchester’s history through this motif of the bee.

Manchester in the Industrial Age

From the eighteenth to twentieth centuries, Manchester underwent remarkable growth. From a modest population of 10,000 in the early 1700s, this number expanded tenfold come the turn of the century. By 1851, it had reached a whopping 400,000. Suddenly, Manchester had become Britain’s second largest city. By the beginning of the twentieth century, at a population of 700,000, it held third spot behind London and Glasgow. Manchester was a powerhouse of activity and influence.

Manchester’s exponential growth can be attributed to the cotton industry. Employers had purchased expensive machinery to process the product arriving on British soil. They needed to attract skilled and dedicated workers to operate it, so they offered relatively high pay packets, luring people from across the countryside. Compared with the agricultural industry, factory work was very attractive. But the higher pay reflected long, grueling hours. While agriculture workers were restricted by daylight and weather, factory workers were expected to work right through. Children were also employed by these factories. But this meant that many families were able to stave off poverty for the first time in their lives. Furthermore, the increased population translated to increased demand for services, so Manchester thrummed not only with mill workers but builders, bakers, seamstresses and so on. New people continued to arrive, and the factories ground on.

But of course, the trade-off to this influx of people was poor conditions. The city’s infrastructure could not support the swelling population and workers accommodation was erected very haphazardly. Amenities like water and waste were not serviced by the city, and disease spread rapidly. Many people lost their lives in the cholera outbreak of 1831-2, with children and babies the worst affected. At this stage, the population growth was maintained only by the influx of new migrants. You can read more about this in an article by academic Emma Griffin, available through the British Library.

Hope amid the darkness

Factory workers and their families lived in challenging conditions. This caused many people to turn up their nose, and cast aspersions on the city. Essayist Thomas Carlyle expounded on what he called the “Conditions of England”. Writers like Charles Dickens and Elizabeth Gaskell depicted the new “urban realism”, creating miserable cities that drew on the model of Manchester. To many, it was thought ugly and squalid. When the young philosopher Friedrich Engels arrived from Germany to undertake training in the cotton industry, he declared Manchester “Hell on Earth”.

But Manchester residents did not share the view of these middle class commentators. For those that lived there, the city provided unprecedented opportunities. Residents were permitted to attend night school. They had the freedom to choose their church, and to attend it. They joined unions and political societies and could actually have some say in the future of the nation. Sure, Manchester was dirty, but to many residents, this was a fair trade-off for decent paychecks and a cultural scene that warmly embraced them.

Today, Manchester continues to claim their “busy bee” image as a badge of city pride. 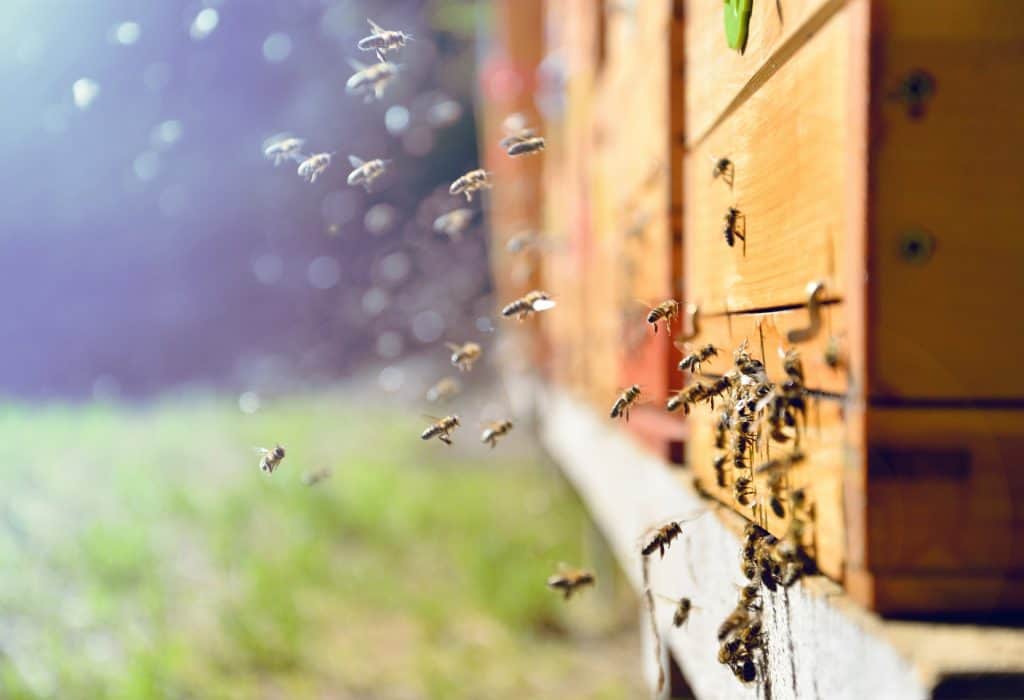 Manchester’s relationship to bees does not end with the Industrial Revolution. You may be surprised to learn that tens of thousands of bees live atop the city, on the roof of the Printworks complex near the Northern Quarter.

Printworks is the former premises of a 19th century newspaper proprietor. Established in 1873, it went on to incorporate various buildings and presses on site, including Kemsley House – which for a time in the twentieth century, was Europe’s largest newspaper printing house. Printworks housed presses until 1986. Then, after more than a century of activity, the building was purchased for 1 million pounds. Sadly, it closed down and became derelict for over a decade.

However, the 1996 Manchester bombing spurred a flurry of regeneration. Printworks received a new identity. It was restored and repurposed as an entertainment centre, opening its doors to Manchester once again. By 2000, it had evolved into a very popular destination, featuring clubs and restaurants housed across its various buildings. It hosted major performances, including concerts by Kylie Minogue and Lionel Ritchie. But the activity is not confined to the ground alone. Look up, and you might spot some of the 60,000 bees on the rooftops. A dedicated apiary is tended by staff at Printworks and the Hard Rock Cafe, who trained as beekeepers just for the purpose. The bees cohabitate with chickens, herbs, flowers and an orchard, making it quite a special environment atop busy Manchester.

The bees produce honey which is packaged and sold for charity. And recently, it became possible to adopt a bee! Among the residents are four queens at $25 apiece. Not only does the adopter contribute to charity, but they get to give the bee a name, while their own name is added to a commemorative plaque. They even receive a certificate for the honour! You can read more about Printworks and its history here.

The vibrant, sculptural bees are on display for a limited time only, but you can see bees in Manchester anytime. The HMS Manchester is nicknamed “Busy Bee”. The bee symbol is visible on the ship’s crest and funnel. Local Boddingtons Brewery boasts a logo featuring two bees on a barrel – a brand they introduced as early as 1900. The University of Manchester’s coat of arms includes three bees in its design. And in the years 2009-10, Manchester City’s football “away” uniforms were inspired by the bee: players wore black shirts with thin yellow strips on the shoulders.

Stroll around Manchester and you’ll see bees on lamp posts and bollards. The Principal Manchester (formerly the Palace Hotel) has an iconic clock-face with four small bees at the clock’s four quarters. There are bees on the floor of the Manchester Town Hall, incorporated into a pretty mosaic design. “Bee related” art can be sighted in the Northern Quarter and Stevenson Square. Koffee Pot café has a mural of 22 bees gathered around a honey heart. These bees represent the 22 victims of Manchester’s 2017 bombing.

A symbol of solidarity and community

When an explosive device was detonated at a pop concert in 2017, Manchester’s devastated residents banded together. Many victims were children, and locals turned to the bee as the symbol of their indomitable spirit. Affected families were housed in hotels or nearby homes as people opened their doors to one another. Locals offered transport to help stranded people back to their homes. In the bomb’s aftermath, tattoo parlours offered Mancunians a way to symbolise their solidarity with victims. The proceeds for bee tattoos were donated to victims and their families, and this had people lining the streets to get involved. As tattoo artist James Davis explains, “People see a warmth in that symbol”, and among those taking part was an 80 year old grandmother getting “inked” for the first time.

At Odyssey, we are interested in stories. Our tours are designed around what makes cities unique, and we approach history from specific and informed angles. If you would like to visit Manchester, check out our Queen Victoria’s Great Britain tour. This tour is perfect for those travellers with an interest in political, social and technological history as we journey through the life, leisure & love that developed from Victoria’s Britain. Alternatively, our Canals and Railways tour tells of Britain’s history through its lasting transportation legacy. We visit viaducts, bridges, aqueducts, tunnels, and locks as we uncover stories of the great social upheaval experienced by people at this time. For more on our varied tours of Britain, click here.

In 2019, Manchester will feature in two of Odyssey Travellers long stay educational tour programs, first as part of paired city program and secondly as part of an participant archaeology program. 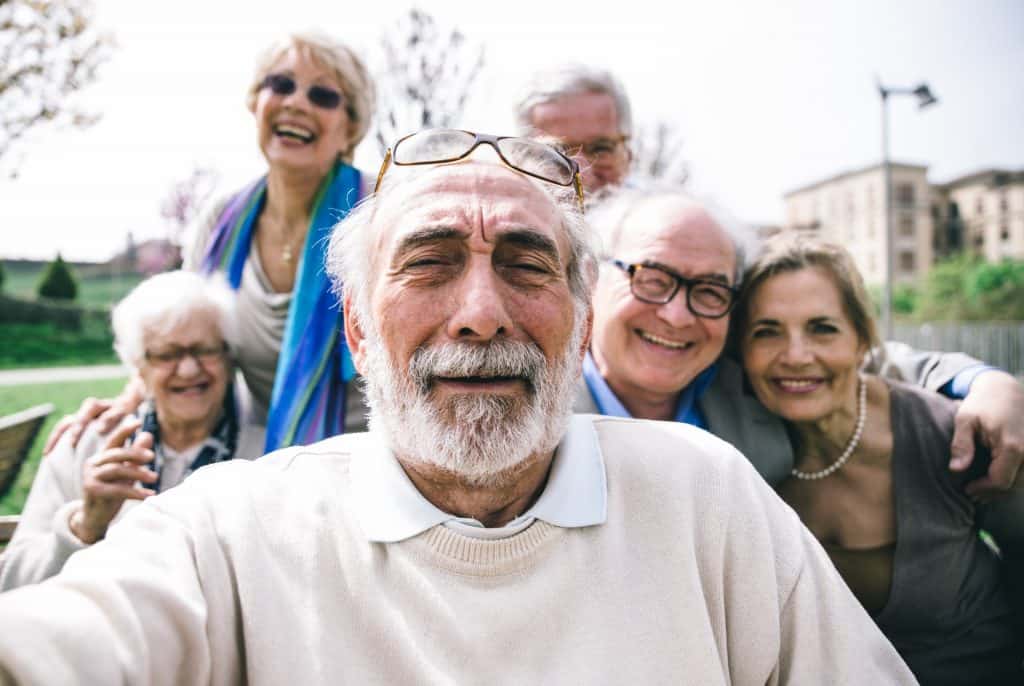