Standing proudly at the edge of the North Sea, Denmark is a beautiful country with picturesque scenery and a vibrant local culture. Wander through centuries-old castles, gaze over ancient Viking ruins, or take in the charming streets of Copenhagen. With 7000 km of coastline, 400 islands and lush, rolling hills, the great outdoors has as much charm as the storybook castles and user-friendly cities.

Lively and liveable Copenhagen is as culturally rich as it is cool with hip restaurants, Viking treasures and one of th world’s most sustainable city centres. Discover over 800 years of Danish history at the majestic Christiansborg Palace or have some fun at the fascinating Lego House. Denmark’s second-largest city, Aarhus , was the European Capital of Culture in 2017 and is nicknamed ‘the city of smiles’. With a vibrant food scene, interesting architecture and eclectic museums, Aarhus is an amazing destination in its own right. 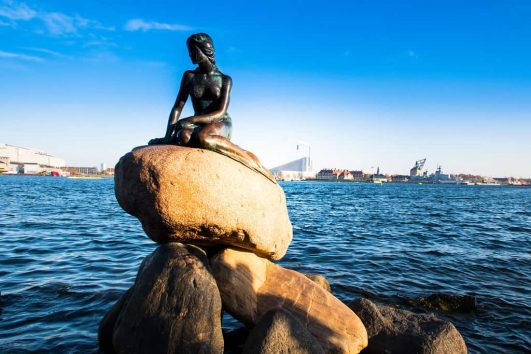 The most photographed attraction of Copenhagen is not a royal palace or the world-famous amusement park Tivoli Gardens, but a statue of a mythical figure many may associate with a Disney film: the Little Mermaid.… 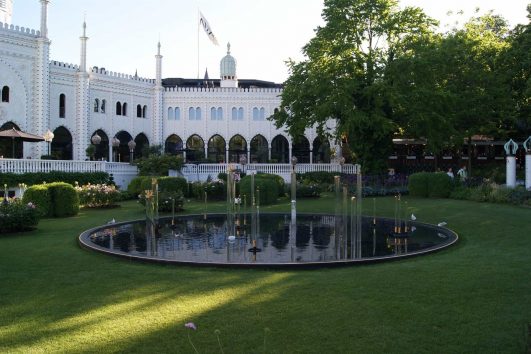 Tivoli, also known as Tivoli Gardens, is an opulent amusement park and pleasure garden in downtown Copenhagen. Opened in 1843, it is the second-oldest amusement park in the world and the most visited in Scandinavia. 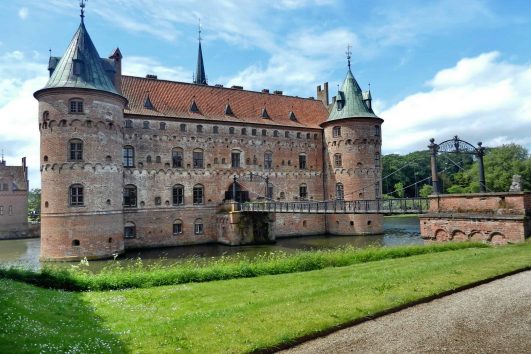 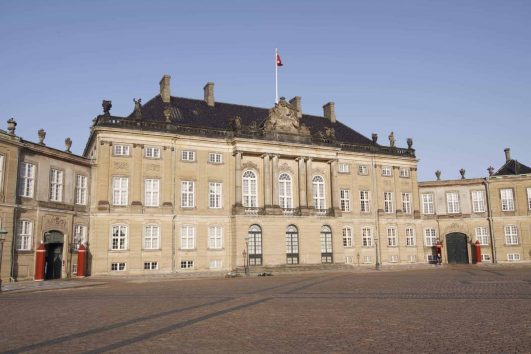 In Copenhagen, one will find Amalienborg, the home of the Danish royal family. Consisting of four identical 18th-century palaces with rococo interiors around an octagonal courtyard, Amalienborg has been home to Danish royals since 1784… 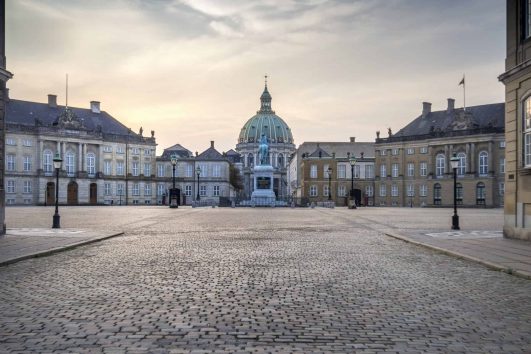 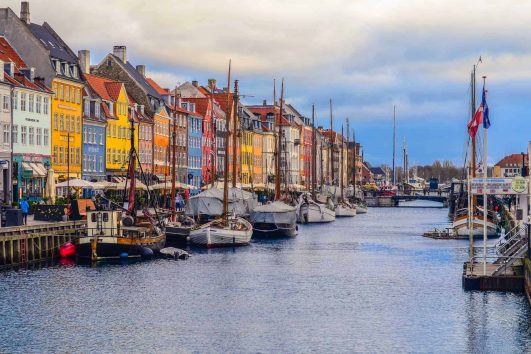 Questions About Denmark for senior travellers

Explore and learn about on a small group tour  for seniors of Denmark and its cultural and historic settlement. Visit Copenhagen the Amalienborg palace and so much more as a couple or solo traveller. 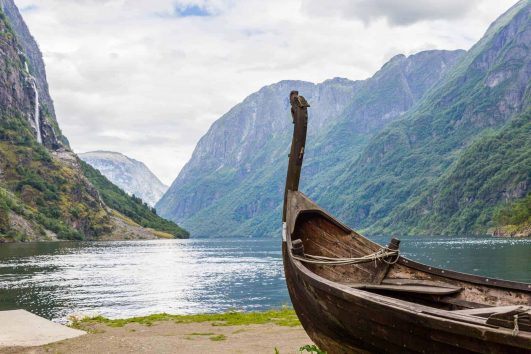 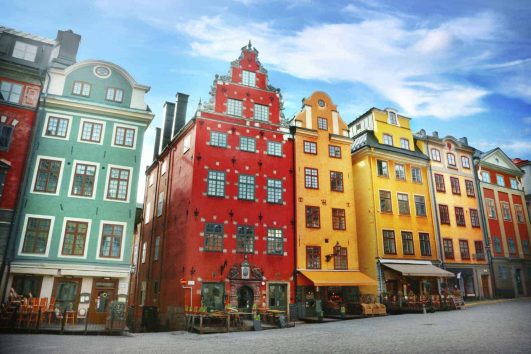 What is hygge? Denmark’s very own brand of cosiness

Have you heard of hygge (pronounced “hoo-guh”)? It’s a way of life in Denmark, and there’s been a recent buzz around the subject. It certainly contributes to Denmark being the happiest country in the world.…

Odyssey travels by coach and occasionally uses local transport, including trains and ferries. Specifics are always outlined in your tour itinerary. Denmark has an excellent public transportation system, with train and bus services covering the length of the country. Domestic flight services are also available, and taxis are always an option in major cities.

Denmark consists of the Jutland peninsula and the Danish Archipelago, covering a total area of 42,924 square miles. Denmark has 8,750 kilometres of coastline, and no location in Denmark is futher than 52 kilometres from the coast. The terrain of the country is largely flat, with rolling plains and sandy beaches.

Denmark has a temperate climate, with mild summers and cold winters. Depending on the season you intend to travel, check the weather reports and dress accordingly.

Denmark has 10 UNESCO World Heritage Sites. You can view the official list of the sites here (https://whc.unesco.org/en/statesparties/dk). A few notable heritage sites include:

Jelling Mounds, Runic Stones and Church, which stand as striking examples of Denmark’s cultural past and religious history.
Kronborg Castle, the stately Renaissance-era castle that served as the setting of Elsinore in Shakespeare’s Hamlet.
Roskilde Cathedral, the medieval Gothic cathedral that has been the main burial site for Danish monarchs since the 15th century.

The largest annual festival in Denmark is the Aarhus Festuge. Running for 10 days from late August to early September, the Aarhus Festuge hosts an electic range of events, including musical acts, dance performance, films, and cultural exhibitions. The Night of Culture is held in mid-October in Copenhagen, and features tours and open-nights of more than 300 cultural sites around the city. For a direct glimpse of Denmark’s Viking past, check out the International Viking Market in early May, with the bygone Viking market of medieval Ribe brought back to life through re-enactments and costumed performers in centre of the city.

Meat and seafood feature prominently in Danish cuisine. Stegt flæsk (pork belly) is the national dish, and is usually served with parsley sauce and boiled potatoes. Herring is a mainstay of Danish food, and is enjoyed pickled, marinated, smoked, fried, breaded or dressed in mustard. Open-faced sanwiches, or smørrebrød, are immensely popular – varities of smørrebrød include kartoffelmad (boiled potato with mayonaise and chives) and fiskefilet (pan-fried fish with remoulade and lettuce). Sweeter offerings include rababergrød (rhubarb compote) and risalamande (rice pudding mixed with cream, vanilla, and almonds). Akvavit is a popular liquor in Denmark, while beer and gløgg (mulled wine with spices and fruit peel) are also popularly consumed.

Generally speaking, Denmark is safe to travel in, though always exercise common sense while travelling. Pickpocketing has been on the rise recently, so remain alert when in crowded areas and when near ATMs.

Whenever you travel overseas, it’s always wise to take an appropriate travel adaptor. Denmark’s electricity supply runs at 230V and 50Hz. Denmark uses both the Type C and Type K electric plugs, so make sure you have the right travel adaptor with you.

Amalienborg, the stunning palace complex built in the rococo style 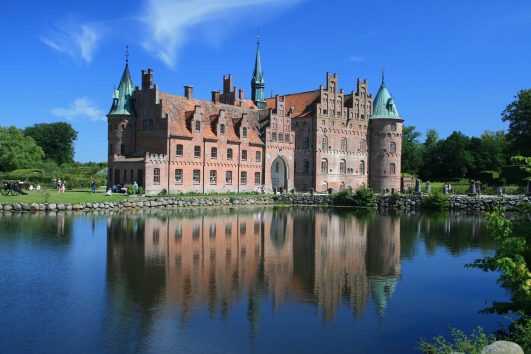 Egeskov Castle, the best preserved moat castle in Europe, was built in the 16th-century and is still lived in today. Explore the inside of the castle, the mazes, lush gardens and the impressive vehicle museum. 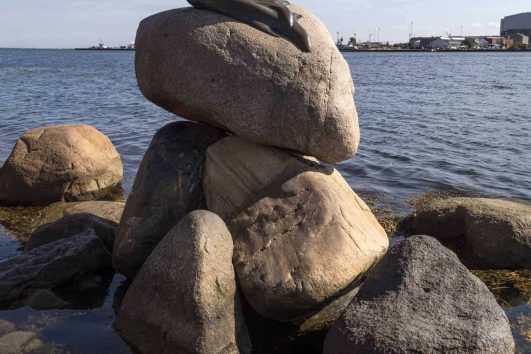 The Little Mermaid statue, the iconic bronze mermaid sculpture based off Hans the classic fairy tale by Hans Christian Andersen 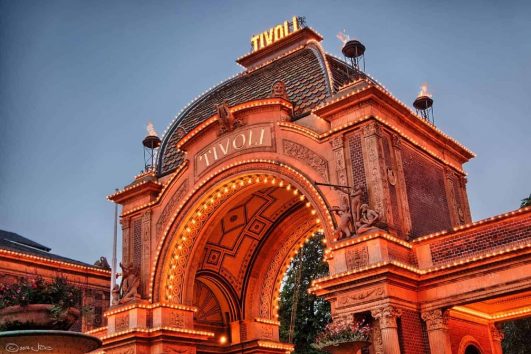 What time zone is Denmark in?

If you’re on an Odyssey tour, we take care of tipping so you don’t need to give it a second thought. However, in your free time, or if travelling independently, it’s essential that you tip an appropriate amount for services. Tipping is not customary in Denmark, with service charges generally included in the bill at restaurants, hotels and taxis. That said, feel free to tip if you feel you received particularly outstanding service at one venue or another.

Wifi should be available in most hotels, cafes and restaurants when travelling in Denmark

Can I use my mobile phone in Denmark?

Check with your cell phone provider to see whether you’re able to make calls and use data while in Denmark. Many providers will allow you to pay a daily fee that allows you to make calls and check the internet while only being charged your regular rates. However, be certain to inform your provider that you’re heading overseas, because just like a bank they can turn off your service as a result of unusual activity.

When is the best time to visit Denmark?

The best time to visit Denmark is May-Aug when the days are at their longest, temperatures are mild and the countryside is in full bloom.  You may want to avoid Copenhagen in June and july, as these are the busiest months for tourism.