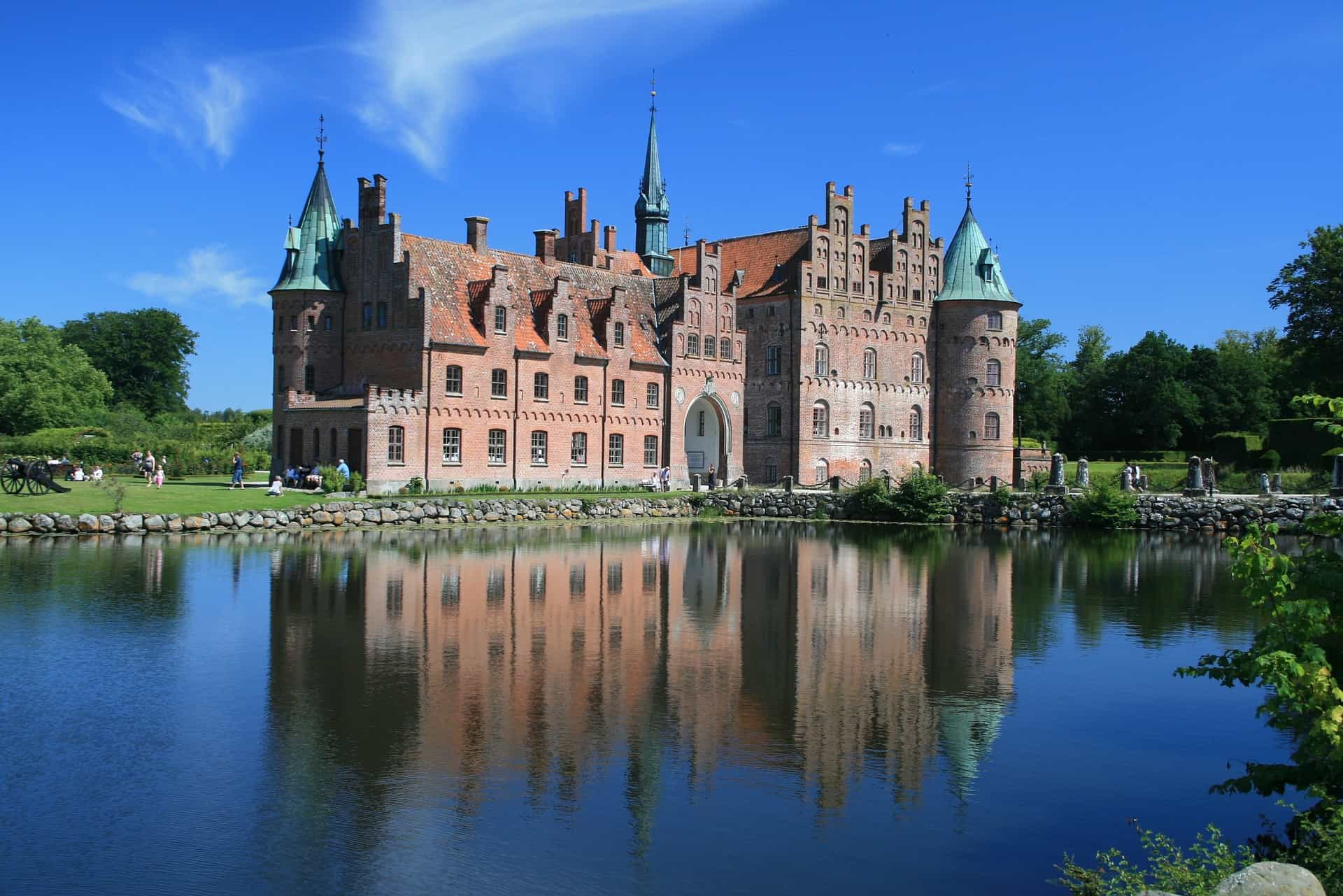 Egeskov Castle, on the island of Funen, is the best preserved Renaissance water castle in Europe and the oldest moat castle in Europe. Around a two-hour drive from Copenhagen, the castle grounds include manicured gardens, a maze, a playground, the moat and a series of museums as well as a variet of seasonal events including a popular Midsommar festival.

The History of Egeskov Castle

Egeskov Castle was built by Frands Brockenhuus in 1554. Brockenhuus had take over the original estate located at the site from his wife’s parents. At the time that he built the castle, there was political unrest in Denmark due to the aftermath of the Count’s Feud and for this reason, many landowners built their houses as well-protected castles. Egeskov Castle got its name because it was said that it took an entire oak forest to built the foundation for the castle given it as built in the middle of a lake. Originally, the castle was only accessible by drawbridge for defensive purposes. The castle itself consists of two long houses connected by a thick double wall so that the first house could be abandoned, if necessary. The central wall contains hidden stairs and a well and the outer walls were built with machicolations so boiling water or solids could be dropped on enemies. The gardens were established at the beginning of the 1700s and can still be visited today when visiting the complex.

In the 466 years since the castle has been built, there have been approximately 30 owners. Egeskov was sold to Henrik Bille in 1784 and his descendants have owned the castle ever since. In 1883, Julius Ahlefeldt-Laurvig-Billie moved into the castle and it had restored by Helgo Zettervall, a Swedish architect. Zettervall updated the caslte into a model farm with its own dairy, power station and railway line to Kvaerndrup, the nearest town. Today, Egeskov still functions as a farm.

The park has been open to the public for many decades and the grounds have remained more or less unchanged since 1959. In 1967 the Veteran Car Museum opened in the former barn and has expanded over the years to surrounding farm buildings. The museum houses an impressive array of beautifully restored cars from the end of the 19th century as well as an aircraft collection.

In 1967, the Veteran Car Museum was opened in the impressive building which used to be a barn and, over the years, the museum has been extended to include several of the surrounding farm buildings.

Since 1986, the Hall and many of the other rooms in the house have been open to the public daily throughout the season. Today, the castle is owned by Count Michael Ahlefeldt-Laurvig-Bille and his wife Princess Alexandra of Sayn-Wittgenstein-Berleburg, niece of Queen Margrethe II of Denmark. The Count and Princess and their children sometimes reside in the castle.

With the extensive gardens, the museums and the interior of the castle to explore, you can spend several hours traversing through Egeskov Castle. In the castle itself there are 66 rooms and many of these can be visited including the Hunting Room, which was a work room for Count Gregers Ahlefeldt-Laurvig-Bille, and the Yellow Room, which features Louise XVI furniture from the 19th century. The Riborg Room on the first floor was where Laurids Brockenhuus’ daughter was kept in isolation for five years after she fell pregnant out of wedlock. The room also features the renowned dolls’ house Titania’s Palace built over fifteen years by English painter and officer Sir Nevile Wilkinson and a staff of outstanding craftsmen. Wilkinson began building the tiny palace after his daughter, Gwendolen, asked her father to make her a house for the little fairies she had seen in the garden. Today, Titania’s Palace is on loan to Egeskov Castle but it is definitely a sight to be seen.

There are several mazes to get lost in, with the oldest maze being established almost 300 years ago. The largest maze was designed by the poet Piet Hein and the round yew maze is enjoyed by adults and children alike. There is also a 130 year old birch forest and there is a tree-top walking bridge 100 metres above the trees. This gives you the experience of walking on the very tops of the trees.

Egeskov Castle is truly like stepping back in time to a fairy tale and the antique-filled rooms and lavish gardens only had to the air of the majesty that the castle has. If you want to enjoy the experience of pretending you are part of the Danish nobility, then you may be interested in our tour of Denmark. On this journey, we visit Egeskov Castle, travelling from Svendborg. Please take a look at all of the Denmark tours we have on offer.