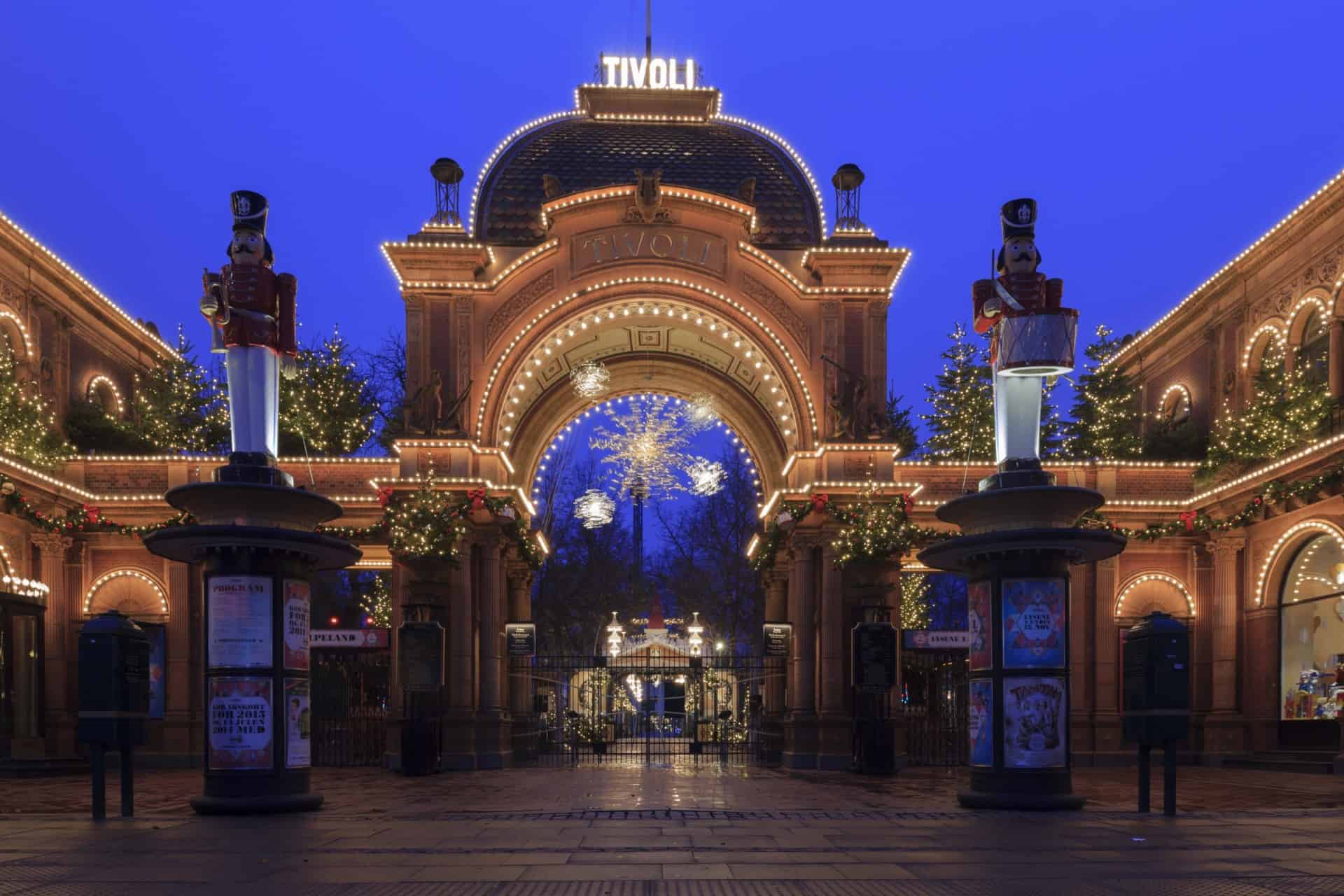 Tivoli, also known as Tivoli Gardens, is an opulent amusement park and pleasure garden in downtown Copenhagen. Opened in 1843, it is the second-oldest amusement park in the world and the most visited in Scandinavia. With its exotic architecture and lush greenery, the 19th-century theme park has long been regarded as a must-see in the Danish capital and, although it is not open year-round, throughout the summer it hosts live music performances including orchestra, ballet and rock band concerts, into the night. With a variety or rides, theatres, food stalls, gourmet restaurants, arcades and pavilions to explore, visiting Tivoli is an adventure for adults and children alike. Located just two minutes’ walk from Copenhagen Central Station and 2km from the centre of the city, it is easy to reach and the perfect place to get lost in.

The History of Tivoli Gardens

Tivoli Gardens was founded by Georg Cartensen, a Danish army officer, in 1843. Cartensen was given a five-year commission by King Christian VIII (r. 1839 to 1848) to create Tivoli, after persuading the king that an amusement park would help keep the Danish people happy because ‘when the people are amused, they do not think about politics.’ King Christian VIII granted Cartensen 15 acres of land outside of Vesterport and until the 1850s Tivoli was technically outside of the city, accessible through Vesterport.

Cartensen was said to have been inspired by parks and gardens he had visited overseas and Tivoli alluded to the Jardin de Tivoli in Paris. Tivoli’s gates first opened on August 15, 1843 and became an instant success. From the beginning, the park featured bandstands, restaurants and cafes, elegant gardens, a merry-go-round, a roller-coaster and impressive architecture.

Even with the success of Tivoli’s opening, Cartensen was constantly trying to come up with new ways to maintain the public interest in the attraction. In 1844, for the park’s second season, he established the Tivoli Boys Guard, which would grow into a popular and well-loved cultural icon as well as a music school for children. Today, it is known as the Tivoli Youth Guard and both boys and girls aged 8-16 can apply to be a part of it.

From the opening of Tivoli, pantomimes were an important part of the park’s attractions. In 1874, a Chinese-style pantomime theatre was built in place of an older theatre and still stands today as the oldest, original building in the gardens. The pantomimes at Tivoli remain popular with audiences from all over the world.

In 1914, the iconic Rutschebanen (Roller Coaster) was added as an attraction and it remains the oldest wooden roller coaster still in operation. It is also one of only seven attractions in the world that are operated by a brake man on each train and is a must-see if visiting the park.

During World War II, parts of the park were burned down by Nazi sympathisers and after closing on June 24, 1944, a group of these sympathisers snuck into the gardens and blew up several facilities including the Concert Hall, the Glass Hall Theatre and the Arena Theatre. The damage was extensive but nonetheless, repairs went underway and the park only closed for a few weeks before reopening to the public.

Since then Tivoli has continued to evolve. In 1844, Cartensen reportedly said that ‘Tivoli will never, so to speak, be finished’ and this is evident today by the many new rides and features that are continuing to pop up, including the dazzling virtual reality ride, the Demon, whose cars whisk you 28 metres into the air while dragons chase you.

Over the years, Tivoli has served as inspiration for a number of people including Hans Christian Anderson and Walt Disney. Hans Christian Anderson visited the park when it first opened and it is said to have inspired his story The Nightingale. Disney visited the park several times before the opening of Disneyland in 1955 and when he first came to Tivoli, he said to his wife ‘Now this is what an amusement place should be!’

For nearly two centuries (the park celebrated its 175th anniversary in 2018), visitors have come to Tivoli Gardens for a sense of wonder and adventure. For adults, it is much more than a theme park and there is plenty to enjoy if you’re not a thrill-seeker. Today, there are around 30 rides, beautiful gardens and flower beds, a hotel, a dining precinct with more than 40 restaurants, concert venues casinos and beautiful sculptures and fountains. Many Danish people hold a season pass simply so they can come and sit in the gardens and get a break from the city. Tivoli is just a short walk from other great attractions in Copenhagen: it is 10 minutes from Christiansborg Palace and the Round tower.

If you want the chance to see the extraordinary Tivoli Gardens, you may be interested in our tour of Denmark or our Scandinavia small group tour, which both visit Tivoli and will allow you time to explore the twinkling pavilions and marvel at the wonderful architecture.

Uncover on a small group tour for couples and solo travellers,  a Viking past and view of the world’s biggest fjords on this journey through Scandinavia. In low-lying Denmark our small group journey takes us to visit the Zeeland, the sea land, and our program includes the vibrant capital of Copenhagen. In Norway we travel through endless forests, skirting great fjords to Bergen.

Denmark, Sweden and Finland realised that the only way to remain competitive on the world stage was through the value of superior design. Travelling with like-minded people on our small group tour you will explore the cities and towns where those high quality products, appreciated around the world, are created including hygge.