The Lake District, nestled in the north west corner of England, is home to some of the most spectacular and dramatic scenery in the United Kingdom. Designated as a national park in 1951, this breathtaking region of craggy hill tops and spectacular views has attracted visitors for centuries. Known primarily for its landscapes, the region is also famous as the birthplace of British Romanticism.

The Lake District as a National park

The Lake District, part of the county of Cumbria, is the largest of the United Kingdom’s National Parks. The national park contains 16 lakes, including Lake Windermere, England’s largest natural lake, and more than 150 high peaks, four of which are over 1,000 metres, including England’s highest mountain, Scafell Pike.

The Lake District was declared a World Heritage Site in 2017, which will protect its natural beauty into perpetuity. It joins such iconic landmarks as Stonehenge, the Great Barrier Reef, and the Taj Mahal in the ranks of sites with international significance. It is the first national park in the United Kingdom to be granted this status.

The UNESCO committee singled out the area’s beauty and agriculture. They also noted the inspiration it has given to a diverse range of artists and writers, including JMW Turner, John Ruskin, William Wordsworth, Samuel Taylor Coleridge, and Beatrix Potter.

The preservation of the Lake District’s natural beauty continues. In June 2019, the National Park Authority purchased Brackenthwaite Hows. A popular stopping point for tourists in the Georgian and Victorian eras, the hill top view was immortalised by JMW Turner in his 1797 watercolor, Crummock Water, Looking Towards Buttermere.

Geography of the Lake District

The vast majority of the Lake District National Park comprises three broad bands of rock. These formations trend from SW to NE. This rock band is made up of the Skiddaw Group in the northwest, formed about 500 million years ago. Skiddaw mainly consists of metamorphosed mudstones. The Borrowdale Volcanic Group has outcrops in central Lake District. This region comprises lava and ash flows that erupted during a cataclysmic period of vulcanism, which occurred over 450 million years’ ago. The Windermere Group, in the Park’s southeast, includes slates, siltstones, sandstones, and limestones formed in shallow tropical seas. Hidden beneath is a batholith of granite. This batholith has moved them upwards, over millennia, into a central dome of mountains.

The Central Lake District is ringed by a glaciated massif of mountains and ridges intersected by wide, steep-sided U-shaped valleys often occupied by ribbon lakes. The southern Lake District fringes are typified by limestone ridges flanked by wooded slopes and lake-filled valleys. On the mountain fringes the fells give way to more muted scenery; low hills and valleys often filled by drumlin suites. The coast is a mixture of sandstone cliffs and depositional dunes, which also occur in the south along the fringes of wide, silt filled estuaries with large tidal ranges.

The Lake District is a textbook instance of glacial landforms. The landscape still bears evidence of the fact that it was formed, millions of years ago, by a series of ice flows moving out from a central core. This ancient geological process gives the region the distinctive geography that tourists enjoy exploring to this day.

The Lake District’s rich soil has built up over the course of millennia, and is largely the result of high rainfall. What makes the National Park especially wet and the rainfall more intense is the process of relief (orographic) rainfall caused by the upland area of fells. The young, characteristically shallow, acid, stony soils formed of glacial till found in the high fells are known as rankers. Excessive leaching led to the formation of podsols: pale, sandy bands beneath the organic horizon, often underlain by an iron pans. Brown Earths, loesses and rendzinas occur over the foothills of the Lake District where drainage is improved, and marine sediments can be found around the shores of Morecambe Bay.

The National Park includes nearly all of the Lake District, though the town of Kendal and the Lakeland Peninsulas are currently outside the park boundary. Its landowners form a diverse group, and includes United Utilities, private landowners/farmers, the National Trust, and the Forestry Commission.

The region’s dramatic lakes and mountains form impressive scenery. Farmland and settlement have altered the natural scenery, and the ecology has been modified by human influence for millennia and includes important wildlife habitats. Having failed in a previous attempt to gain World Heritage status as a natural World Heritage Site, because of human activities, it was eventually successful in the category of cultural landscape and was awarded the status in 2017. 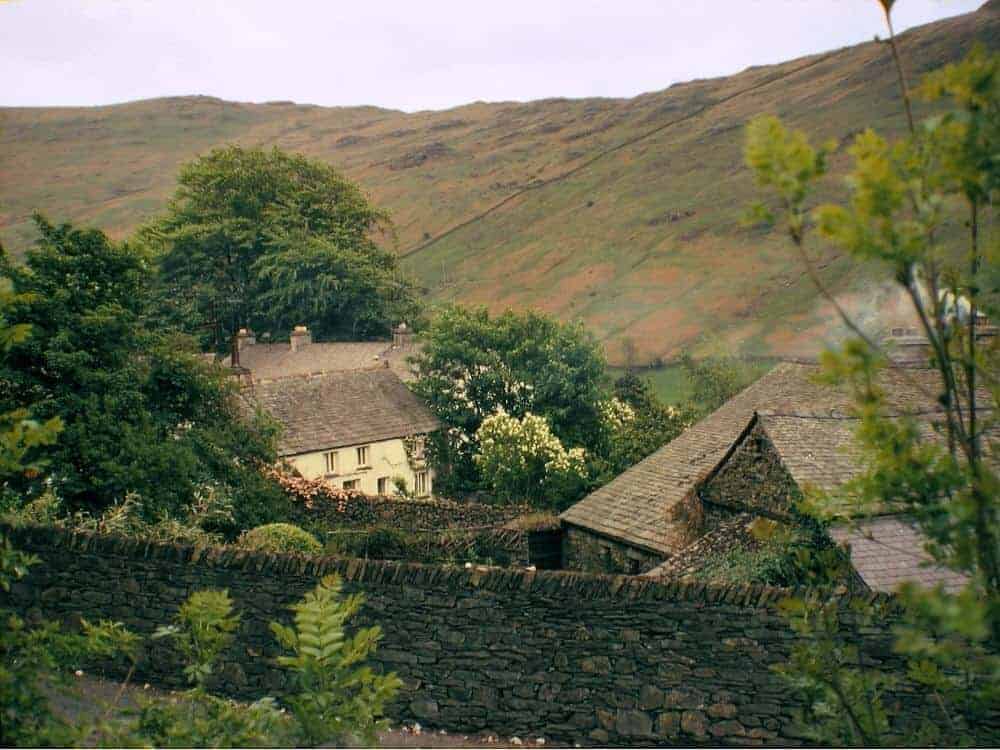 Tourism in the Lake District

Tourism in the Lake District began in the late-eighteenth century. Previously, it had ben considered too wild and desolate. While untouched peaks and craggy valleys inspired the imaginations of previous Britons, it was for the most part uninhabited and inhospitable to travelers. Daniel Defoe summed up perspectives on the Lake District in 1724 when he called it the “wildest, most barren and frightful of any that I have passed over in England.”

Eighteenth-Century Visitors to the Lake District

However, in the late eighteenth-century, attitudes towards the lakes began to change. In 1778, Father Thomas West published A Guide to the Lakes, in which he recommended the best spots for visitors to take in the landscape.

By the turn of the century, the Industrial Revolution meant that cities were increasingly polluted and unpleasant, and travellers began to see the natural world as a place to restore health.

The same period also saw the beginnings of the Romantic movement in literature and art. In contrast to the Enlightenment ideas that dominated the 18th century, which emphasised rationality and looked to the classical world of Ancient Greece and Rome, the Romantics stressed the individual, and saw intense emotion as the source of true art. For William Wordsworth, one of the most important English Romantic poets, poetry was the ‘spontaneous overflow of powerful feelings’.

At the center of Romantic art was the love of nature. They did not care for the classical, ordered gardens of their predecessors, and found beauty in nature at its most wild and untamed. The Lake District, once see as desolate, attracted many of the Romantics because of its rugged scenery.

Before long, the writings of poets such as Wordsworth, Robert Southey, and Samuel Taylor Coleridge were promoting the beauty and splendour of the landscape to a nation eager to escape the growing cities. In 1799, Wordsworth and his sister Dorothy moved to Dove Cottage, in the Lake District town of Grasmere, where they would live for over eight years.

Wordsworth, who had grown up in the region, emphasised the natural beauty of the lakes in many of his poems, perhaps encapsulated best by his most famous poem, ‘I wandered lonely as a cloud’ which begins:

I wander’d lonely as a cloud
That floats on high o’er vales and hills,
When all at once I saw a crowd,
A host, of golden daffodils;
Beside the lake, beneath the trees,
Fluttering and dancing in the breeze.

Wordsworth was determined to protect the Lake District from encroaching industrialisation, and campaigned against a proposed train line. At the same time he wished to share the beauty of his home with responsible visitors, and in 1820 published A Guide through the District of the Lakes in the North of England, which sold rapidly. His readers were eager to experience the sites described for themselves, and take in the sublime landscapes he evoked. Indeed, Wordsworth’s evocative description of the area generated a great deal of tourism in subsequent years. Political unrest across Europe in this period motivated wealthy Britons to explore the interior, instead of heading overseas for Grand Tours.

Other Romantic poets such as Wordsworth’s friend, Samuel Taylor Coleridge, took a different perspective. Unlike Wordsworth, who found solace in the lakes, Coleridge emphasised the gothic elements, the dramatic and craggy landscape.

Daytrippers in the Lake District England

The expanding British railway network had an enormous impact on tourism in the nineteenth century. In 1847, the railway was extended to Windermere, which made short day trips possible from many parts of the UK. In later years, extensions to Lakeside and Keswick made the area even more accessible to tourists. These new transport possibilities allowed for an easy day’s return journey from cities such as Newcastle, Manchester, and Liverpool.

At the same time, improved conditions for Britain’s working classes allowed a new subsection of British society to enjoy the Lake District. Various gains in labour conditions – including a shorter working week, paid holidays and sick leave, and higher wages – allowed the working class to experience the area. In the twentieth century, motorways and private car ownership made the Lake District even more accessible to visitors.

Further promoting the region was the popularity of Arthur Ransome’s Swallows and Amazons series. Published between 1930 and 1947, the novels captured the imagination of children across Britain. The stories focus on the Walker Family, who sail a dinghy named Swallow, and the Blackett children, who sail a dinghy called Amazon. With the Walkers considering themselves explorers and the Blacketts pirates, adventures naturally ensue.

The series has been adapted into films in 1973 and 2016. Though fictional, the locations in the book are clearly derived from real places in the Lake District: the lake that the children sail on is based on Lake Windermere, while the surrounds are based on the countryside around Coniston Water. The Swallows and Amazons series continues to attract tourists to the Lake District today. 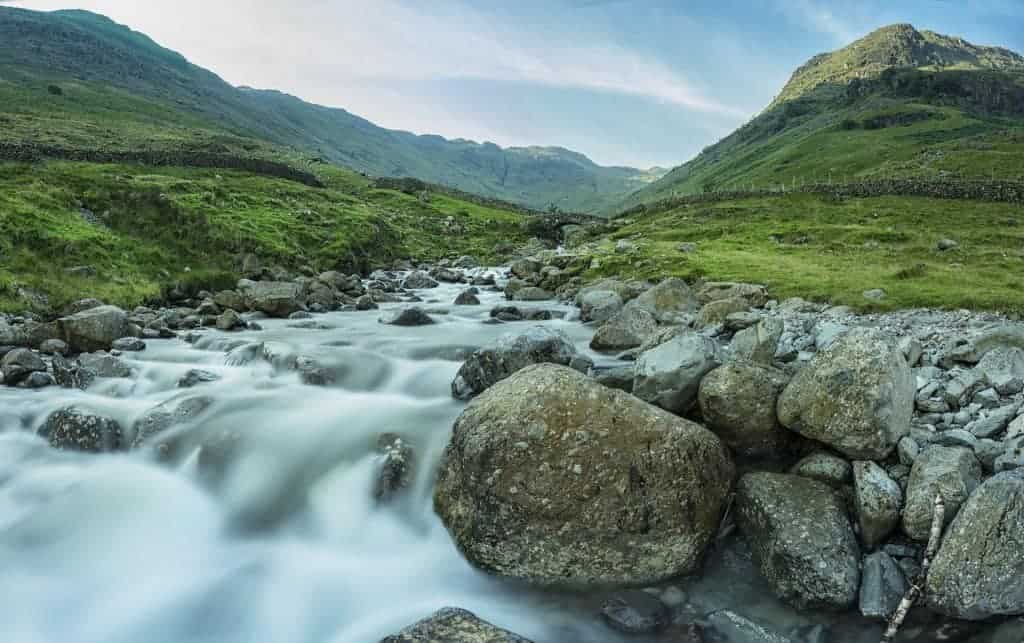 The stunning scenery and spectacular views of the Lake District continue to attract tourists today. On the shores of Lake Windermere are the quaint country towns of Ambleside and Windermere, packed full of local shops, cafes and restaurants. Hire a boat and, like the Swallows and Amazons children, paddle around the lake.

For literature fans, a visit to Dove Cottage in Grasmere, where William and Dorothy Wordsworth lived, is also a must. The humble cottage, surrounded by natural beauty, was a great inspiration to Wordsworth. Today, the cottage remains mostly unchanged, allowing visitors to immerse themselves in the lives of the Wordsworths.

For those looking to escape the man-made world, the Lake District is also home to numerous walking trails that cater to varying abilities. Also essential for walkers is the nearby Yorkshire Dales National Park. Here the landscape is more rugged, a limestone plateau with scattered dwarf trees and other unusual plants. Look for the ancient stone walls – the largest man-made feature in Yorkshire, measuring over 8000 km in total. While dating walls is not easy, some are believed to have been built as long ago as the Bronze Age.

Odyssey Tours to the Lake District

Odyssey is offering travellers an unforgettable experience of Ireland and the Lake District England through our popular Small Group Walking Tour for Retirees. This eighteen-day tour has been specially designed to cater to the active senior. The tour offers a guided walking tour through the beautiful countryside of Ireland, Northern Ireland and Northern England. Together, we spend up to five nights in each locality and head out each day to explore the surrounding area in some depth. A good level of fitness is required for this walking tour, but the effort expended will be well rewarded.

Our tour begins in Eire (the Republic of Ireland). It then continues on in the UK’s Northern Ireland, the Lake District England, before finishing in the Yorkshire Dales National Park. These regions each provide dramatic and unique scenery. Each one contains remote wilderness areas waiting to be explored, along with fascinating, living history and picturesque villages. There is something on this tour of Lake District for almost everyone.

For more details, and a full itinerary, please visit this link. You may also be interested in our popular small group tour, “Discovering the art and literature of England; Jane Austen, Shakespeare.” You can find more details on this tour here.

The Guardian: A Guide to Cumbria and the Lake District

New York Times: The Other Wordsworth