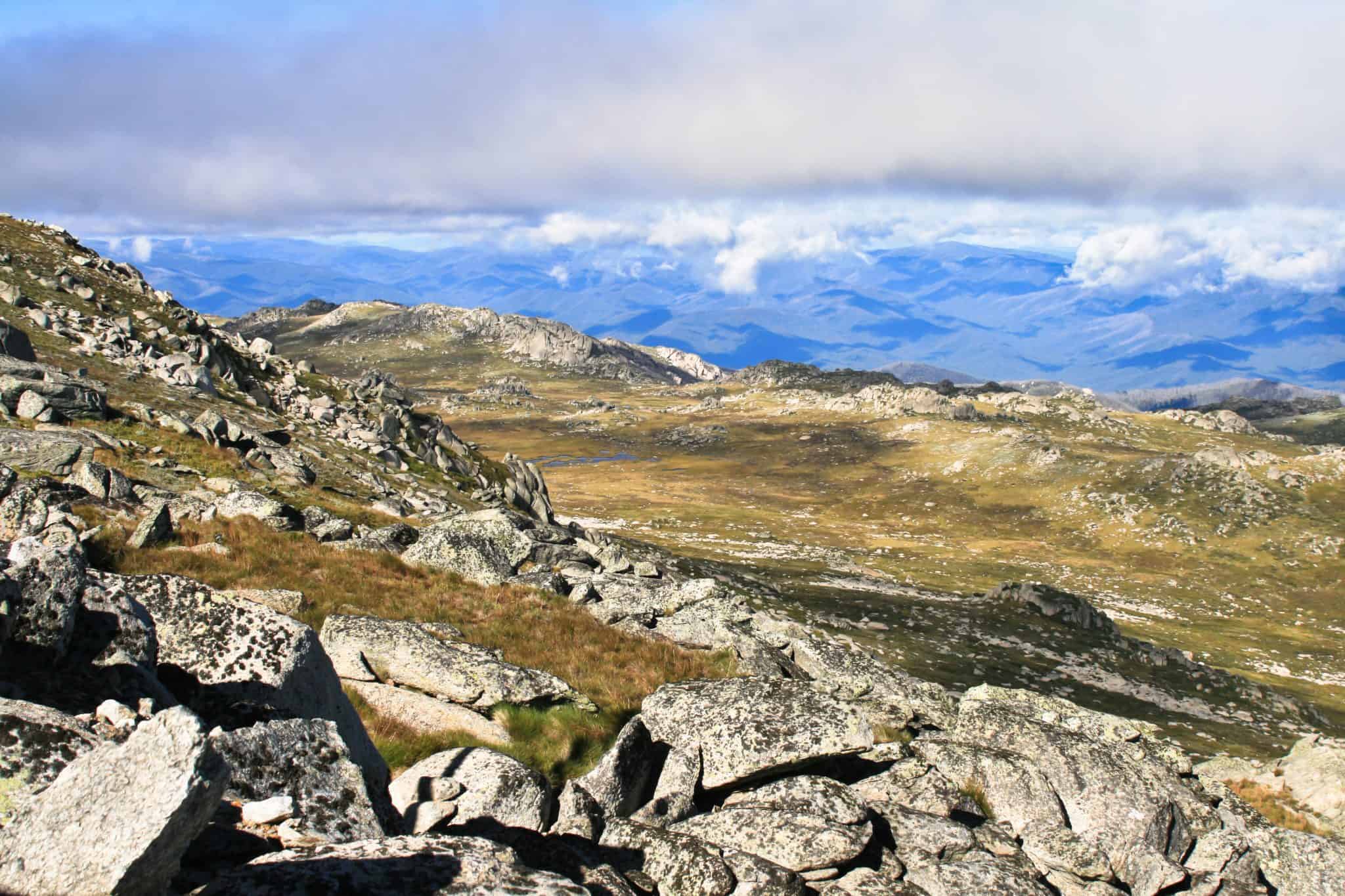 Winding 650 kilometres through Australia’s highest reaches, the Australian Alps Walking Track is one of Australia’s most challenging – and most rewarding – long walks, passing through snowy peaks, stunted snow gums, and wildflower valleys.

The trail begins in the gold town of Walhalla in eastern Victoria, wanders through the Snowy Mountains of Victoria, New South Wales and the ACT, ending on the outskirts of Canberra. Ranging from well-marked fire trail to scrambles across isolated valleys, the walk passes through the most remote parts of the Alpine National Park (Victoria), Snowy River National Park (Victoria), and Kosciuszko National Park (NSW). It’s the kind of walk where you might go days without seeing a fellow traveller, allowing you to truly immerse yourself within nature.

The first peak is the 1620 metre Mt McDonald, a five-hour climb through scrub and over steep hillsides. The peak offers the first of the track’s great views, a vista spanning from deep valleys to alpine meadows with wildflowers in hues of pink, blue, white, purple and yellow.

A short detour here passes under the tree line to Cowombat Flat, where the mighty Murray River of the Mallee and the Fleurieu Peninsula begins as a tiny alpine stream.

Mt Despair, Horrible Gap, The Terrible Hollow, Mt Exhaustion, Disappointment Ridge, Mt Mistake and Mt Misery: as you pass through the Australian Alps, you begin to notice a theme. Historians suggest that the melancholic names given to many places here likely come from early stockmen and drovers battling terrible weather and wild, inhospitable country.

Before them, the area was inhabited by a number of Aboriginal language groups, the Kurnai/Gunai people in the southern Victorian Alps, the Walgal people in what is know Kosciuszko National Park, NSW, and the Ngarigo people in the highlands. Several archaeological sites speak to the ancient occupation of the area, including Cloggs Cave, Victoria, where 8500-year-old stone tools have been found, and Birrigai, near Namadgi National Park, where archaeologists have found a rock shelter used by Aboriginal people 21 000 years ago.

Every summer for thousands of years, Aboriginal people from all over southern New South Wales and Victoria came to the Snowy Mountains to feast upon the bogong moth, smoked out of their hiding places. The moths were cooked over coals, or ground into a paste, and have been described has having a pleasantly nutty taste.

A bit past halfway through, the track passes from the Victorian high country into New South Wales, reaching the ski fields of the Main Range. Walkers have the option of a short journey to Thredbo ski resort for hotel accommodation and a cooked dinner, or can continue down the path to Mt Kosciuszko, Australia’s highest peak, named in honour of the Polish democrat and nationalist, Tadeusz Kosciuszko, by its first (European) climber, the Polish nobleman explorer, Paul Edmund de Strzelecki.

From Mount Kosciuszko to Canberra, the walk passes 245 kilometres, through the Main Range and over Mount Jagungal. The limestone Cooleman Plain is home to mountain creeks, disappearing under the earth only to reemerge to fill Cave Creek with freezing water at the Blue Waterholes.

From here, the track descends through Cotter Gap, snow gums giving way to blackwood, silver wattle, native cherry, and banksia on a last, flat, section of the walk. The track ends at Booroomba Rocks in Namadgi National Park, a granite ridge offering stunning views across Canberra.

The Australian Alps has around two hundred historic huts, some of which are close to the walking track. With the oldest dating back to the 1860s, they come from every era of settler history in the Alps, built for shelter by graziers, gold miners, foresters, government workers, skiers and bushwalkers. Looking out for one another among harsh territories, the mountain code of etiquette provided that huts were always left unlocked and stocked with matches and a small amount of dry firewood and kindling. Built far away from any hardware stores, hut architecture is a masterwork in ‘getting by’, with structures built out of corrugated iron, bark and shingles, using fencing wire in place of nails.

Koalas, wombats and kangaroos can be seen in Baw Baw National Park. On mountain tops, look for wedge-tailed eagles, while the final flat section is home to the eastern grey kangaroo. Make sure to watch out for dingoes, and feral pig dogs.

The Australian Alps are home to Australia’s most iconic collection of brumbies, the wild horses – descended from escaped or lost horses from the early years of settlement – immortalised by Banjo Patterson in The Man From Snowy River. With the ability to destroy native habitats, brumbies are variously regarded as a dangerous pest – or an important part of our national heritage.

The Australian Alps Walking Track is suitable for experienced walkers, used to being self-reliant in remote areas, and with strong navigational skills, including the ability to use a map and compass. While yellow markers are visible in densely forested areas of Victoria, certain wilderness areas do not have markers.

In total, the track takes around eight weeks, but many walkers choose to take on smaller parts in the Baw Baw, Alpine, Kosciuszko and Namadgi national parks. Even in summer, weather conditions in the mountains can be unpredictable – thunderstorms are common, and snow may fall in the higher reaches of the track. During winter and spring, snow can cover long sections of the track.

Water can be scarce along some parts of the track, so bring at least two days supply. Make sure to boil or filter all water found along your journey.

Odyssey Traveller is now offering a number of tours of Southeastern Australia, Victoria and New South Wales. We have a tour devoted to the 19th century history of Victoria, with an emphasis on the gold rushes, and a tour of Marvellous Melbourne. We also have a tour devoted to UNESCO World Heritage Sites in the southern states of Australia, including the Budj Bim Cultural Landscape and the Willandra Lakes, where the discovery of Mungo Lady and Mungo Man revolutionised Australian archaeology. And finally, our outback tour, Broken Hill and ‘Back, passes through some of the most remote areas of New South Wales.

Travellers with an interest in long distance hiking may be interested in our walking tours, including our Walking Tour of New Zealand and our Wainwright Walking Trail. We also have a number of articles about walking, including tips on preparing for a walking holiday, a guide to our walking tours, and suggestions for selecting walking shoes and socks, and women’s walking shoes.