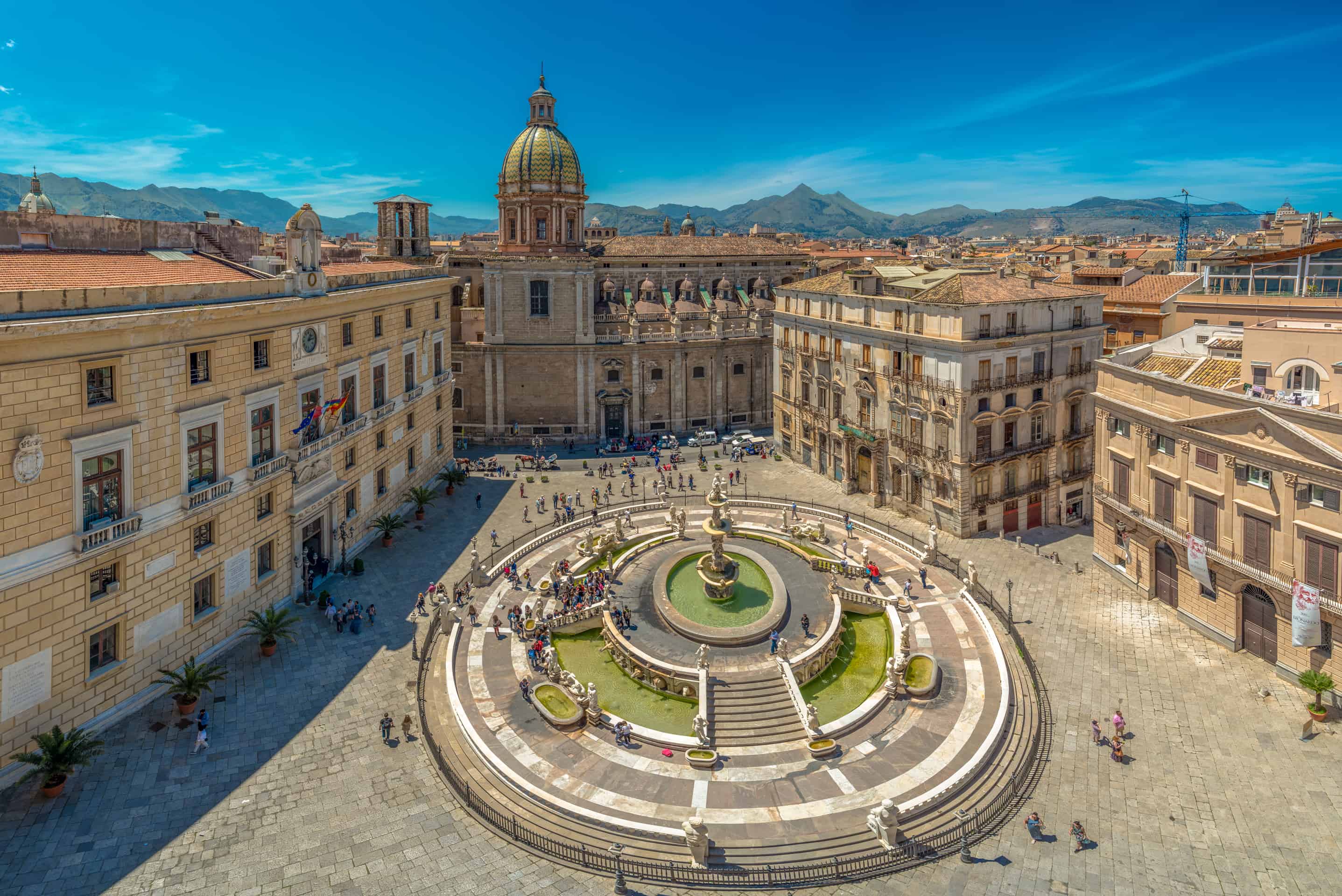 The capital of Sicily and the island’s chaotic heart, Palermo is where civilisations – Arab, Norman, Italian – collide.

Palermo was founded by Phoenician traders in the 8th century BC. It then passed to the Carthaginians, before coming under Roman rule in 254 BC. Known to the Romans as Panormus, the city declined under their rule, but recovered under the Byzantine King Belisarius. Sicily and Malta were conquered by Arabs in the 9th century AD, and Palermo became a centre of trade with North Africa.

By far Palermo’s most important rulers were the Norman kings Roger I and Roger II. Under their rule Palermo flourished as a cosmopolitan centre of arts, architecture, and culture. Roger encouraged his Arab, Byzantine, Greek and Italian subjects to remain, making the city Europe’s most significant cultural melting pots. The golden age continued under the German monarch who succeeded the Normans, Frederick II, whose court was renowned around Europe for its cultural brilliance.

However, the city would decline under subsequent German rulers, coming under Angevin (French) rule in 1266, and then Spanish rule in 1422. Little about the city changed until 1861, when the nationalist hero Giuseppe Garibaldi seized the city – with the support of the locals – for the newly united Italy. Sadly, even under a united Italy, Sicily and Southern Italy have continued to struggle to catch up economically.

Palermo is a must-see destination for its magnificent Arab-Norman monuments. The highlight is the Cappella Palatina (Palantine Chapel), in the Norman Palace. Designed by Roger II in 1130, the amazing chapel is a testament to medieval Palermo’s diversity – the glittering mosaics were laid out by Byzantine Greek artists brought specifically to Palermo by Roger II for the project. The mosaics are complemented by a wooden muqarnas ceiling carved in geometric Arabic style – unique among Europe’s cathedrals.

Palermo’s multicultural history is also palpable at the Cattedrale di Palermo. Erected on the site of a mosque, the Cattedrale combines Norman gothic masterwork with painted Islamic-style geometric decoration. The Cattedrale is home to the monumental tombs of Sicily’s medieval rulers, including Roger II and Frederick II.

A rather macabre aspect of the history of Sicily can be seen at the Capuchin Catacombs. In the late 16th century, Palermo’s Capuchin monks outgrew their cemetery, and began to mummify their members in crypts below the monastery. Intended at first for the friars, burial in the crypt became a status symbol for the people of Palermo. Local luminaries chose to be buried in the crypts, outlining the clothing they wished to be buried in in their wills. The last mummification happened as late as the 1920s, and tourists can see the mummified bodies, some better preserved than others.

Visitors to Palermo should also make time to explore the four ancient quarters of the city, centring on the baroque Quattro Canti (Four Corners) and Santa Caterina Church. Stroll to the north and you’ll find 19th century Palermo, home to the neoclassical Teatro Massimo, the biggest opera house in Italy and the second-biggest in Europe. Famously, the Teatro was used for the final scenes of The Godfather III, vividly juxtaposing the beauty of high culture with the brutality of the mafia. In the new town, make sure to also head to Via Libertà, a street lined with the unique Sicilian ‘Liberty’ style of Art Nouveau.

Even today, Palermo’s fascinating local culture is shaped by its multi-cultural history. Make sure to take a stroll through the markets of the medieval city, akin to a Middle Eastern souk. And make time to visit a local restaurant and sample Sicily’s fabulous cuisine: arancini, pasta alla norma, pasta con le sarde.

Palermo is a strikingly situated city, located between the coast and the mountains. In summer, join the locals and head to Mondello Beach. Make sure to make a day tour to the town of Monreale, home to the Monreale Cathedral, another masterpiece of Arab-Norman architecture.

Palermo is an ideal place from which to launch your tour of the island of Sicily. Nearby highlights include the beautiful town of Castellammare del Golfo, set by the Tyrrhenian Sea, and Trapani, a coastal city with buildings dating back to the middle ages and early modern period. Further afield is Catania, Sicily’s second city, set beneath Mt. Etna, Europe’s largest active volcano; and the archaeological sites at Agrigento, one of the world’s most extensive collections of Greek ruins.