The Literary Allure of Tangier, a City of Storytellers 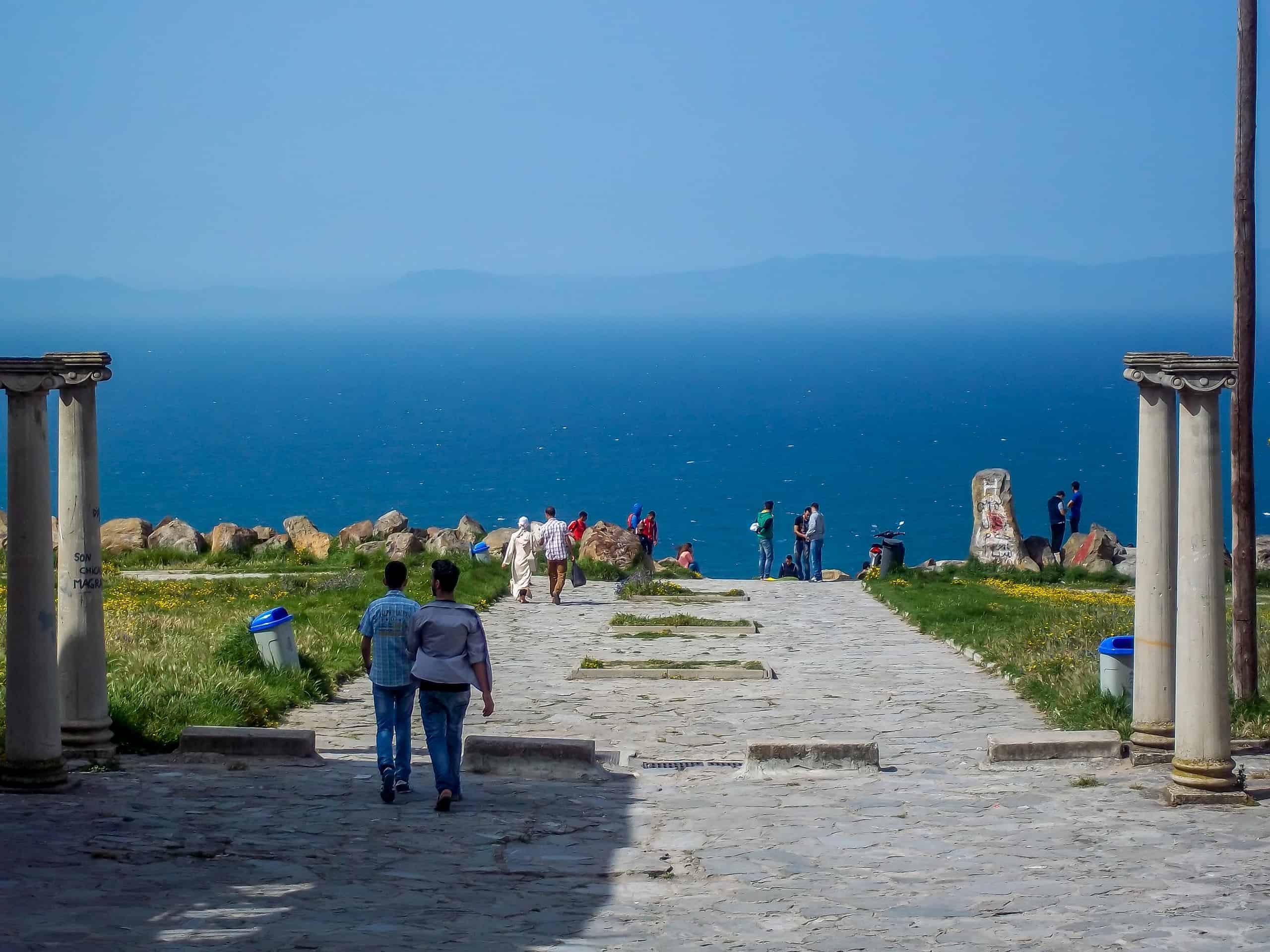 A Literary Stroll Through Tangier

Morocco’s Tangier, located just about 13 kilometres across the Straits of Gibraltar from Spain, is Europe’s gateway to Africa and over the centuries has been a haven for artists and writers drawn to its hotbed of culture and its spectacular views of the sea. The city itself is shrouded in myth, named after Tinge, Hercules’ lover, and home to the famous Cave of Hercules.

In this article we will explore this city and treasure trove of stories, and the plethora of writers who spent time living in Tangier and were determined to peel back its many layers.

Despite gaining a somewhat sordid reputation during its time as an international zone (or the ‘Interzone’), the city has gone through a metamorphosis, transforming itself into dazzling port city of palm trees and boutique seaside hotels that remain abuzz with culture and history. The article is inspired partly by Richard Hamilton’s book Tangier: From Romans to the Rolling Stones published by Bloomsbury in 2019 as well as other articles linked throughout. Read on discover more about Tangier’s gritty literary history and its fascinating mythological beginnings.

This is part of our collection of Morocco-related articles that we share as useful background information before you go on a Morocco tour with us, or to simply help you as you firm up your travel plans. All of those articles can be found here.

The First Story of Tangier: The Demigod’s Resting Place

The Caves of Hercules or Les Grottes d’Hercule encapsulate the spellbinding charm of Tangiers. It is here that you will be pulled into one of Tangier’s most gripping tales – the legendary story of the hero Hercules and how he deftly pulled apart Europe and Africa, creating the Strait of Gibraltar and the Pillars of Hercules.

The story begins when the hero was born, the son of Zeus and a mortal woman, Alcmene. Hera, the wife of Zeus, was appalled to discover her husband’s infidelity and that he had fathered an illegitimate child and was determined to destroy the boy. During one such attempt, she caused Hercules to go mad and slay his wife and three children. Seeking atonement, Hercules travelled to the Oracle at Delphi who told him that to make amends for his crimes he st be enslaved by Hera’s champion, Eurysthesus for twelve years and complete ten labours for him. Together, Hera and Eurysthesus set out to choose ten labours so difficult that Hercules would be unable to complete them. Once he did these, including killing Hydra, the serpentine water monster, and slaying the Nemean lion, Eurysthesus demanded he perform two more tasks.

In his book Tangier, Richard Hamilton revisits this myth and describes how the first of these two extra labours was to travel to the Garden of Hesperides and retrieve the golden apples, whose flesh would bestow eternal youth on whoever ate them. Hercules travelled to the lower slopes of the Atlas Mountains to find the garden and tricked Atlas, whose daughters were entrusted with looking after the tree, into giving him the apples. The legend has it that Hercules slept in the caves before performing this task. This is the version of the story in Greek mythology, but as Hamilton points out, ‘the Roman writers tell it differently’ (p. 12). According to them, when Hercules was on his way to the garden he found he had to cross a mountain that had once been Atlas. His way was blocked so using his suprehuman strength, Hercules smashed through the mountain, splitting its rocky face in half and separating Europe and Africa. This was how the Strait of Gibraltar was born and the reminders of this act can be found in the Rock of Gibraltar and the Jebel Musa, east of Tangier.

The story also holds that Caves of Hercules were bottomless and actually formed one end of a 24km subterranean tunnel between Morocco and Spain. People say this is how the macaques who live at the top of the Rock of Gibraltar made their way from Africa.

The Interzone and the Beat Generation

For over thirty years from 1923, Tangier was classified as an International Zone, made up various sectors governed by a mix of France, Spain, Britain, Portugal, Sweden, Holland, Belgium, Italy and the USA. All kinds of people flooded into Tangier during this period, lured by the promise of cosmopolitan freedom. Along with writers came spies, criminals, exiles, addicts and other eccentrics and the city became renowned for its anything-goes culture. During this time, the city became an hub for experimental writers, including many of the Beat Generation, a post-WWII American counterculture.

Many writers who made their way to Tangier came after hearing of the experience of Paul Bowles, an American writer and composer who moved to live in Tangier in 1947 after falling in love with the coastal city. In an excerpt from his booking Without Stopping, published in Tangier, Bowles notes that when he first visited the city in 1931 it ‘was self-sufficient and clean, a doll’s metropolis’ (p. 128) and later he described how ‘it did not take me long to come to the conclusion that Tangier must be the place I wanted to be more than anywhere else’ (p. 132). The Sheltering Sky, perhaps his most famous novel, was published in 1949 and would go on to become a bestseller. Often described as semi-autobiographical, it tells the story of Port and Kit Moresbury, a sophisticated American couple travelling through the Moroccan desert. It is a hallucinatory, existential but astonishing piece of work that was turned into a film by Bernardo Bertolucci. Let It Come Down, his next novel, is set in Tangier amid the corruption the defined life in the International Zone. It tells the story of a Nelson Dyer and his self-destruction. A skilled translator, Bowles also played an important role in bringing the stories of many Moroccan writers to a bigger audience. He remained in Tangier until his death in 1999, having lived 52 of his 88 years there.

Inspired by Bowles’ work, William Burroughs made the move to Tangier in the 1950s. Here he wrote his touchstone novel, Naked Lunch. The novel was considered a controversial piece of work, in part due to its frequent use of obscene language, and it was initially banned in Los Angeles and Boston. A drug- and sex-filled tale, Naked Lunch follows Burroughs’ alter-ego William Lee and dealt with the ideas of addiction and control. Terry Southern described it as ‘an absolutely devastating ridicule of all that is false, primitive, and vicious in current American life‘. Edited and compiled by fellow Beat writers, Jack Kerouac and Allen Ginsberg, much of what the novel looks at remains relevant today and it gives an insight into the heady, grimy atmosphere of Tangier during the Interzone. Burroughs himself struggled with heroin addiction and it is said he fled to Tangier to escape jail time in Mexico after accidentally killing his wife.

Brion Gysin, an artist, writer, poet and performer, moved to Tangier after visiting Paul Bowles in 1950. He lived in the port city on and off for twenty years and became a close friend and collaborator of Burroughs. Together the pair published The Third Mind, a manifesto about the cut-up technique, a technique where one literally cuts up words and phrases into pieces and rearranges them, disassociating them from their original meaning. Gysin also opened a restaurant in Tangier with his friend Mohamed Hamri. Called The 1001 Nights, the restaurant was popular with expats for the four years it was open. In 1969 he published his finest piece of work, The Process, a novel which tells the story of  Ulys O. Hanson, whose pilgrimage across the Sahara turns out to be a hallucination. Gysin died in 1986 of lung cancer and his ashes were scattered at the Caves of Hercules.

Mohamed Mrabet is considered to be Morocco’s greatest storyteller, originally from the Rif region, and many of his spoken stories were translated and brought to the page by Paul Bowles. He met Paul and Jane Bowles in 1960 while working cleaning floors in their apartment building. Soon, Mrabet began to work for them as a cook and bodyguard and despite not having an formal education, Mrabet’s storytelling prowess was obvious to Bowles. Bowles began to record Mrabet’s stories, eventually transcribing them. In 1967, Mrabet’s first novel Love with a Few Hairs was published, followed by The Lemon two years later. Oral storytelling has a long tradition in Morocco but Josh Shoemake describes how Morrocan Arabic, or darija, is not a written language, putting Moroccan writers in ‘an absurd position unknown in almost any other part of the world: to write about their country, they must choose a foreign language in which to write, generally French or classical Arabic’. Even though Mrabet’s work was first published in English, his stories are some of the few Moroccan works we have that are actually composed in Moroccan Arabic. Today, Mrabet still lives in Tangier with his wife of 54 years, his four children, ten grandchildren and great-grandchild. However, he told the Washington Post, that while he found success internationally, he is still not recognised or well-known in his home country.

Another friend of Bowles’ and one of Morocco’s most famous writers who found success in Tangier (and internationally) was Mohamed Choukri. Bowles helped Choukri publish his novel For Bread Alone, written in Arabic and first published in English, translated by Bowles. The book reflects on Choukri’s childhood and his experience with the city of Tangier. Later the book was published in French and Arabic, though it was banned in Morocco and other Arab nations despite its success in other parts of the world. It was permitted to be sold in Morocco in 2000 and now has been translated into 38 languages. Choukri went on to publish many other works, including Jean Genet et Tennessee Williams à Tanger and In Tangier: Paul Bowles, Jean Genet, Tennessee Williams about his interactions with, and memories of, the three writers. He died in 2003 of stomach cancer but his legacy endures.

It is easy to see why writers and readers alike are drawn to Tangier. Its former status as an International Zone as well as its mythological roots have created an intrigue around the coastal city. Take a wander through the city and you can still visit some of the old haunts of the writers of the 20th century like Hotel El Muniria, where Burroughs wrote Naked Lunch, and Gran Cafe de Paris. You can also pay a visit to Hotel Continental, where scenes from The Sheltering Sky film were shot. From its ancient history to its contemporary makeover, Tangier is full of stories waiting to be discovered. If you are interested in discovering Tangier and more about Morocco, you may consider joining Odyssey Traveller’s tour to Morocco. You may also want to read more about Morocco and all it has to offer as a holiday destination, including a fascinating history, pristine natural beauty and rich, vibrant cities.