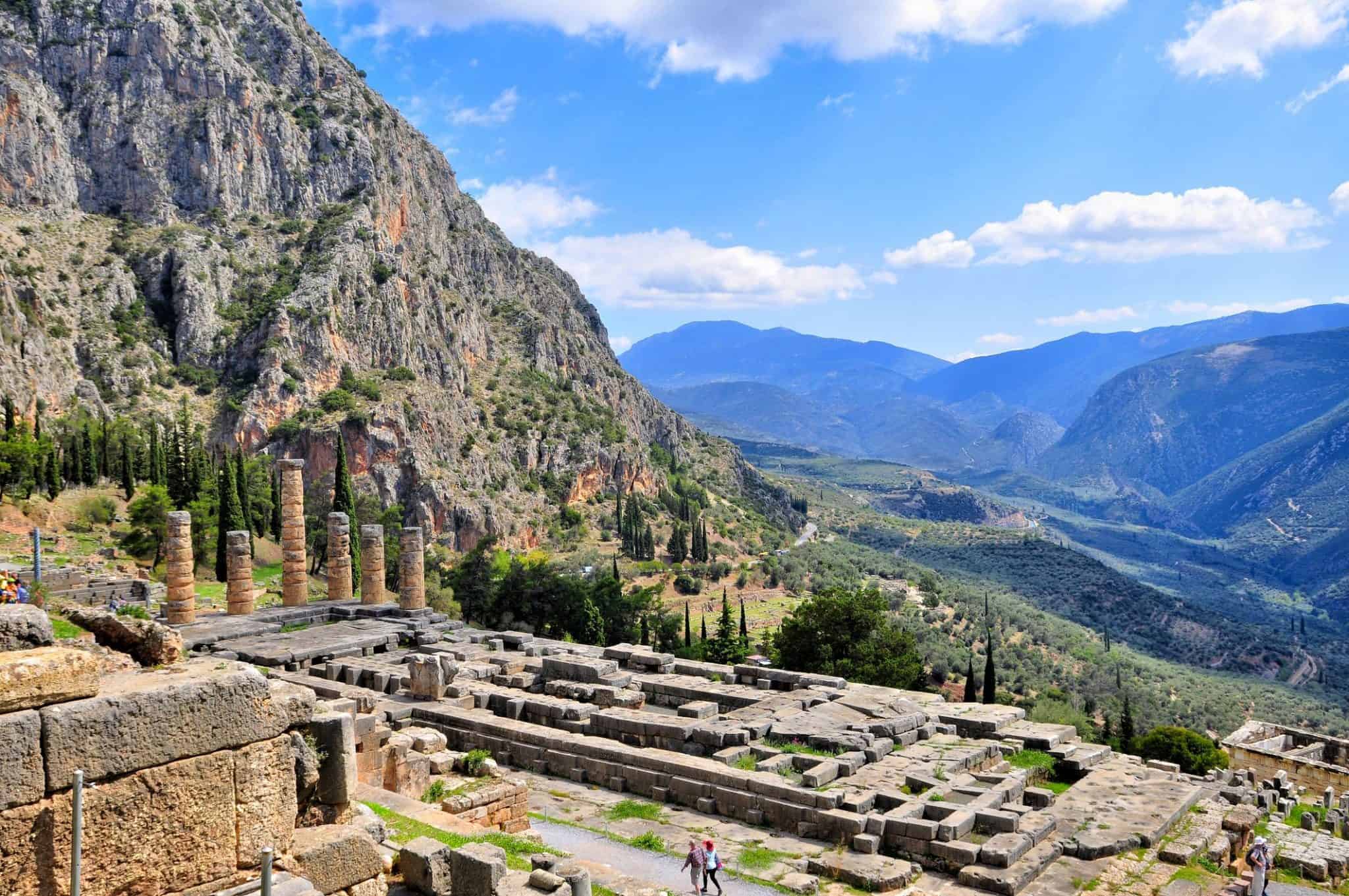 The name ‘Delphi’ comes from ‘Dolphin’ because it is widely believed that Apollo first visited the region in the shape of a Dolphin. Believed by the Ancient Greeks to be the centre of the earth, Delphi is located in Phocis, mainland Greece, near the Gulf of Corinth, situated between two towering rocks of Mount Parnassus known as the Phaidriades (Shining) Rocks. One of the most important religious centres in Greece and the ancient world, it is here that the Ancients consulted the delphic oracle at the sanctuary of Apollo. The rocky slopes, strewn with ruins, where olive, pine, and cypress tenuously seek out an existence, add to the mysterious aura which pervades the area, providing one of the most impressive experiences in Greece.

Odyssey Traveller conducts a day tour of Delphi as part of our 15 day Greece Odyssey tour. Our tour guide field trip visits UNESCO World Heritage Listed Delphi Archaeological Site and Delphi Museum with its famous bronze Charioteer. There will also be some free time to explore ancient Delphi. This article explores the Greek history of Delphi to assist your tour visiting Delphi.

Believed by the Ancient Greeks to be the centre of the earth, Delphi, formerly called Pytho, is set on a large terrace on the slopes of Mount Parnassos. Delphi was one of the most important centres of Greece in ancient times and it was here, at the Sanctuary of Apollo, that the priests and others consulted the famous Oracle of Delphi and the priestess Pythia to know their fortunes. The ancient Greeks considered the centre of the world to be in Delphi, marked by the stone monument known as the omphalos (navel). Greek mythology claims that Zeus determined the site of Delphi when he sought to find the centre of his “Grandmother Earth” (Gaia). He sent two eagles flying from the eastern and western extremities, and the path of the eagles crossed over Delphi where the omphalos, or navel of Gaia was found. Apollo is worshipped in Delphi because he killed a serpent also called ‘drako’ and became the protector of the region.

Excavations reveal that Delphi was first inhabited in late Mycenaean times (as early as the 15th century BCE). Priests from Knossos brought the cult of Apollo to the site in the 8th century BCE. After the Romans captured Delphi in the early 2nd century BCE, it was frequently pillaged. Nero is said to have removed 500 statues from the vicinity. It declined with the rise of Christianity and was ultimately buried under the site of a new village until the late 1800s. It was recognised as an Unesco world heritage site in 1987.

Delphi like other religious regions in Greece held Games to honour Greek gods. The Pythian Games were the second most important games in Greece after the Olympics, held every 8th year.

The central and most important part of Delphi was the temple of Apollo, where the Pythia delivered her prophetic words in the adyton, a separate, restricted room at the rear. The Delphi Tholos has circular design and stands about 13.5m in height at the middle of the Athena Pronaia temple.

The Sacred Way led to the theatre of Delphi above the temple and the stadium. The Delphi Theatre was built in the same hill as the Temple of Apollo. The theatre was constructed with limestone in the 4th century. It has over 35 rows that can accommodate an audience of about 5000. Many events are still hosted here to date.

Delphi also contained settlements and cemeteries, which were built outside and around the two sanctuaries.

In 2001 a team of scientists discovered the presence of ethylene gas in the region -once used as an anaesthetic and capable of producing a trancelike state. Their findings accord with ancient accounts of vapours rising from the temple floor. This has caused many theories that ancient greek Pythia was under a narcotic state while giving her predictions, due to being enclosed chamber in the basement of the temple.

During your small group tour of Delphi with Odyssey Traveller on day 15 of our  Odyssey to Greece small group private tour, you will experience a guided tour of this archaeological site.

On Odyssey’s small group tour Odyssey to Greece, you will stay in nearby picturesque mountain village of Arachova for two nights. From the vicinity of Arachova we will do a Delphi day trip to learn more about ancient Greek mythology and the Delphi archaeological museum and site.

Delphi is the stop after Meteora, Kalambaka and Greek island of Corfu, Olympia, Kalamata, Nafplio and before continuing on to Mykonos and back to Athens, to see the archeological site of Acropolis, must-visit museum of Acropolis and other spectacular exhibits.