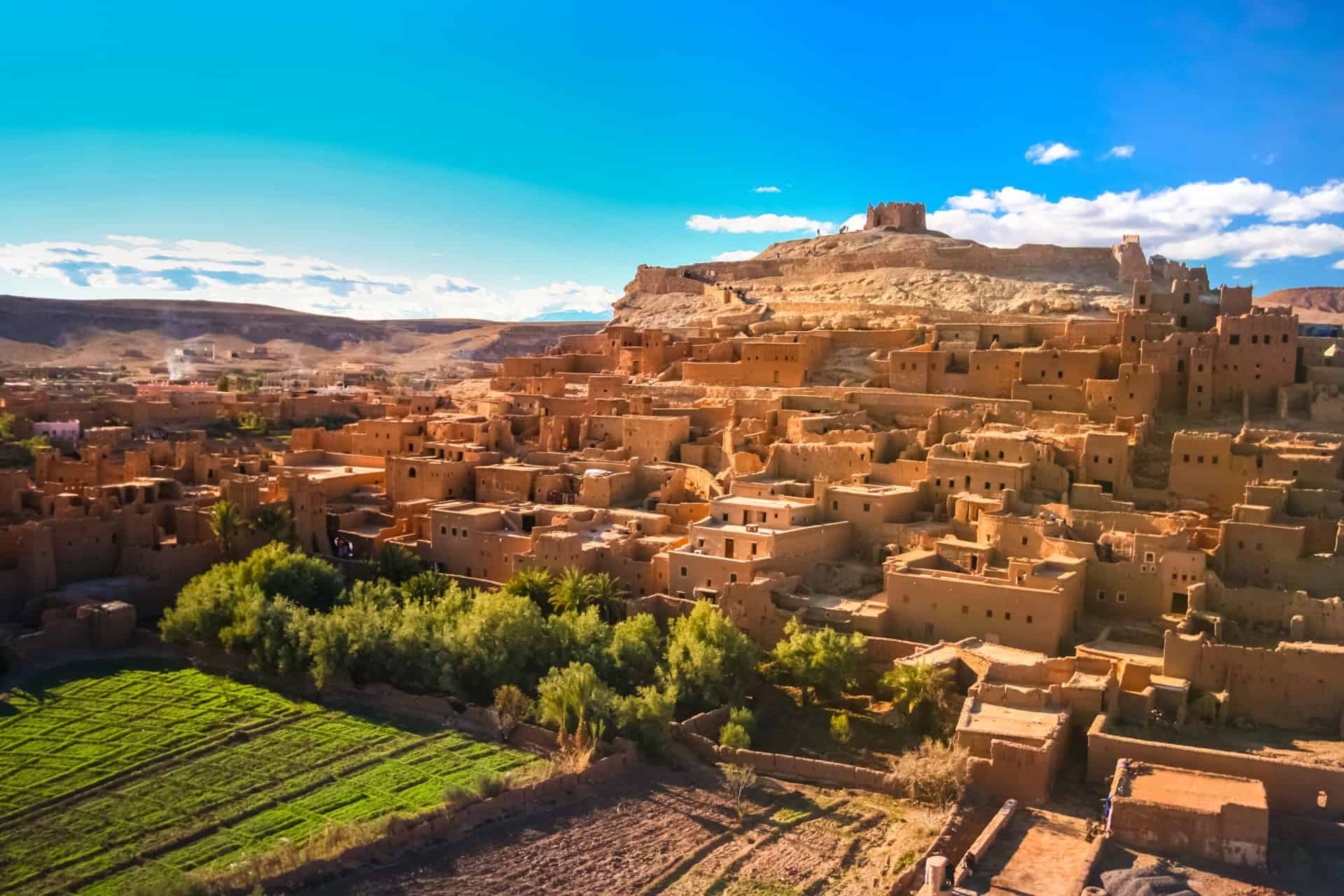 A ksar, a North African term which means “fortified village” (from the Arabic qasar), is a traditional habitat composed of a group of earthen buildings surrounded by defensive walls. The Ksar of Ait-Ben-Haddou in Morocco, a UNESCO World Heritage Site since 1987, is the most famous example of this form of traditional architecture and building techniques.

Located in the southern slopes of the Atlas Mountains in southern Morocco’s Ouarzazate province in the Ounila Valley, the Ksar of Ait-Ben-Haddou is a group of dwellings that range from modest homes to small urban castles, packed tight within the high walls. You may recognise its red buildings and narrow roads from TV shows and films, as it was the filming location of Game of Thrones, Lawrence of Arabia, and Gladiator, among others.

According to tradition, the Ksar was founded in the 8th century by Ben-Haddou, who gave his name to the village and whose tomb was said to be located within its walls. However, the structures within the Ksar are no older than 17th century, though the building techniques and the use of organic material point to an older building tradition.

The Ksar served as a trading post of the trade route connecting Marrakech (Marrakesh), the former imperial capital of Morocco, to ancient Sudan and the Sahara. The defensive walls served as protection for city residents and merchants from raids and bandits. In addition to living quarters, the Ksar also has community centres, pointing to a vibrant village life. The community areas include a mosque, a public square, two cemeteries (Muslim and Jewish), and a threshing area for grain outside the ramparts.

The earthen architecture, exposed to the elements and ill-maintained, began to crumble, and more and more of its residents moved to a modern village on the other side of the Ounila River. In the 1940s there were 90 families living in the Ksar; now there are only four families preserving the traditional lifestyle of pre-Saharan Morocco.

The Ksar is open to visitors and is a stop on most Morocco tours. In fact, one of the remaining families even opened a traditional cafe to welcome people to this desert hotspot. On your way to the ksar, you’ll meet locals who sell handmade items that you can purchase as your Moroccan souvenir. When you tour the Ksar of Ait-Ben-Haddou, don’t forget to climb to the top of the hill, if able, in order to better appreciate the beautiful Moroccan desert landscape.

This can be a day trip from Marrakech, or a stop on a guided tour from Marrakech to Merzouga near the Algerian border. The Merzouga desert is a gateway to the Erg Chebbi Dunes. An early morning trip is recommended to beat the crowds. Your departure point would be your chosen riad or Marrakech accommodation, and a drive from Marrakech to the desert fortress would take about four hours, driving through the breathtaking scenery of the Atlas Mountains. You can also go on an optional camel ride or camel trekking through the sand dunes and beautiful desert landscape on your day tour.