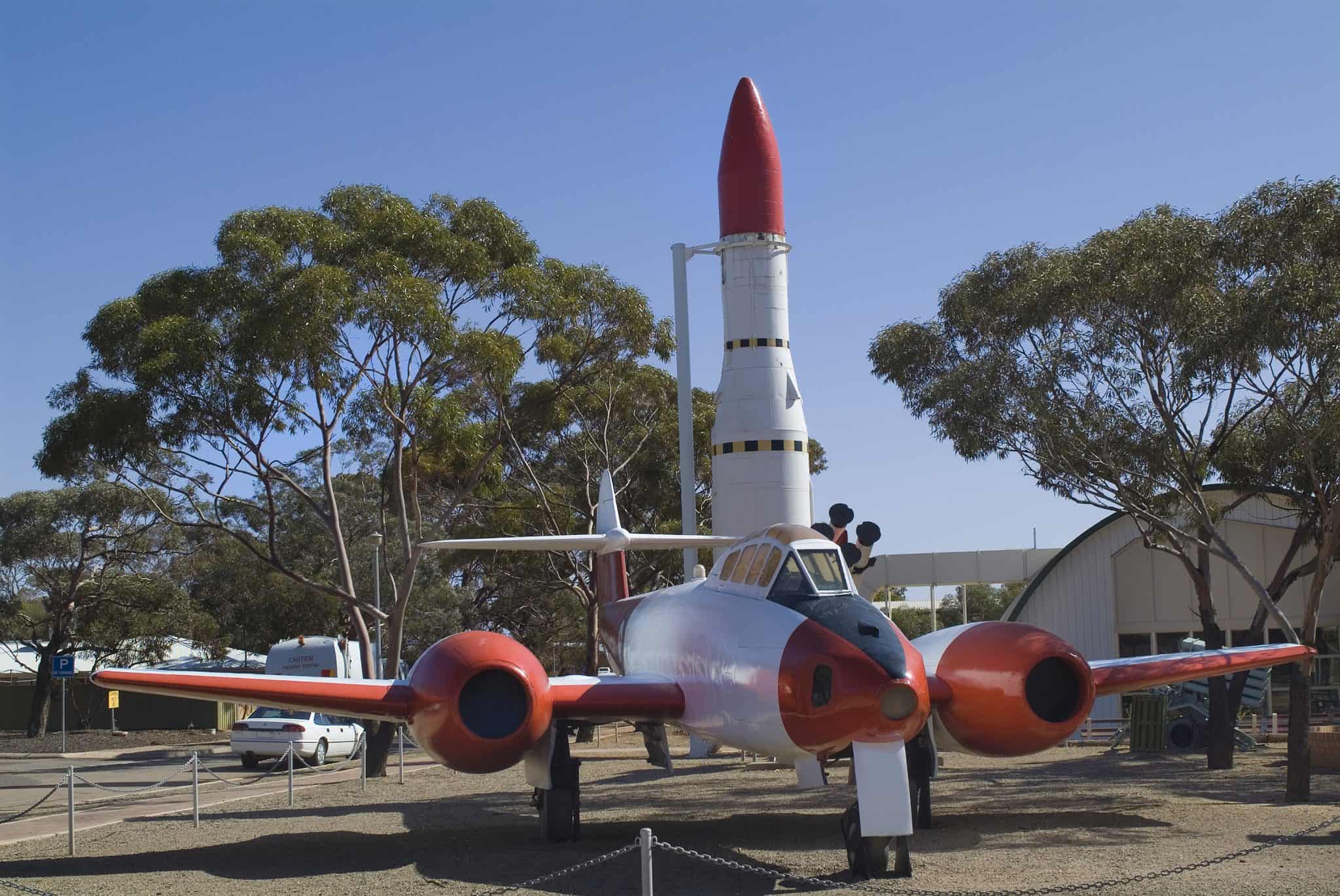 Built to house scientists, researchers and defence personnel working on missiles and spacecraft during the Cold War, Woomera today is rather like something from a sci-fi movie, a space-age ghost town deep in the arid land of the Australian Outback.

Prior to the arrival of Europeans, the area was home to the Kokatha Aboriginal people. The name Woomera comes from a Dharug word (the Dharug are an Aboriginal people who live just west of Sydney) referring to a “a type of throwing stick with a notch at one end for holding a dart or spear, thus giving increased leverage in throwing.” The name was chosen by RAAF Captain Alfred George Pither as apt for the military base being developed in the 1940s.

In the aftermath of World War II, the British government identified the need for a rocket testing range, as German rocket attacks on Britain had played a decisive role in the war. After considering a site in Canada, the British Government made a formal request of Australia’s government to establish a rocket range 1600 km long and 300 metres wide. The site of Woomera – deep in the outback, 485 km north of Adelaide and 180 km north of Port Augusta, and with an annual rainfall of 190mm – was chosen. In 1947, the land was leased to the Department of Defence and the Woomera village was surveyed and built.

In the early Cold War, from 1947-1970, Woomera was an important centre. The area was used for rocket tests by the Australian, British and US militaries, NASA and West Germany. At its peak, the town had a population of between 5000 and 7000 – today, that has contracted to 1900, most of whom are probably US military personnel working at nearby Nurrungar.

In its heyday, Woomera township was closed off to the public. Today, wandering around the deserted, quintessentially post-war suburban, streets of the town is rather eerie. While Woomera itself is no longer used for military activity, the nearby Woomera Protected Area (WPA), remains closed off for the use of the Australian military, as does the joint US-Australian Ground Station at close-by Nurrungar.

The main attraction in town is the Aircraft and Missile Park and Heritage Centre. Start in the indoor Heritage Centre for an excellent overview, including an extensive collection of Kokatha artefacts and a display exploring the lives of families who moved to Woomera in the 1950s and 1960s.

Outside the building are well-preserved examples of many of the rockets launched at Woomera. The Black Arrow is a large rocket launched four times from 1969 to 1972. While the first launch was destroyed almost immediately because it was so unstable, the fourth launch succeeded in putting the Prospero satellite into orbit. It continues to rotate around the Earth today.

The Meteor Mark 7 is a British jet aircraft, used against German V-1 rockets during the Second World War, and incorporated into the RAAF arsenal during the Korean War.

The Jindivik (meaning ‘haunted one’), is an Australian designed pilotless target aircraft, designed in 1952, which completed over 100 flights.

The Ikara (after the name that the Adnyamathanha people use for Wilpena Pound in the Flinders Ranges National Park) is an Australian-developed anti-submarine weapon, capable of delivering an American 44-type homing torpedo by radio tracking and guidance systems. Trials were conducted in Woomera from 1961 to 1969.

Odyssey Traveller visits Woomera as part of our tour of the Flinders Ranges and outback South Australia. Our trip begins and ends in Adelaide, passing through Port Augusta on the Spencer Gulf. On our way to the iconic Australian outback town of Coober Pedy, we stop in at Woomera. From Coober Pedy, we take a scenic flight over the desert landscape of Lake Eyre National Park, before exploring the iconic Flinders Ranges National Park (s) in depth.

In the Northern Flinders Ranges we visit Arkaroola Wilderness Sanctuary. We then head into the main Ikara Flinders Ranges National Park, where we visit Wilpena Pound/Ikara Flinders, a natural amphitheatre of mountains with the highest point at St Mary’s Peak. We also delve into the geology of the area on the Brachina Gorge Geology Trail, a 20km guided walk with signs explaning the geology of the region. Brachina Gorge is also home to a significant population of the yellow-footed rock-wallaby. The Flinders Ranges are home to an number of stunning gorges, including Bunyeroo Gorge, Parachilna Gorge (near the historic Prairie Hotel), and Alligator Gorge in the southern Flinders.

Finally, our tour of the Ikara Flinders heads back through the southern Flinders to Adelaide. While the tour only has one night of accommodation in Adelaide, we encourage you to stay on and explore this historic city, and the many sights of the Adelaide region, the wine-growing areas of the Barossa Valley and Maclaren Vale, the beaches of the Fleurieu Peninsula, and Kangaroo Island.

If you’re interested in seeing South Australia’s Flinders Ranges, we encourage you to consider our tour. Odyssey Traveller has been designing educational tours for mature and senior travellers since 1983. While we’ll take you to the tourist sites – Wilpena Pound, Coober Pedy, and Lake Eyre – we also pride ourselves on getting off the beaten path. Our tour will explore the rich Aboriginal heritage of the Flinders Ranges, exploring the connection between the Adnyamathanha people and sites like Ikara/Wilpena Pound, and viewing ancient Aboriginal art on walking trails through the national park. We also learn about the settler history of the Flinders Range at Old Wilpena Station.

If that appeals to you, click here for more information. 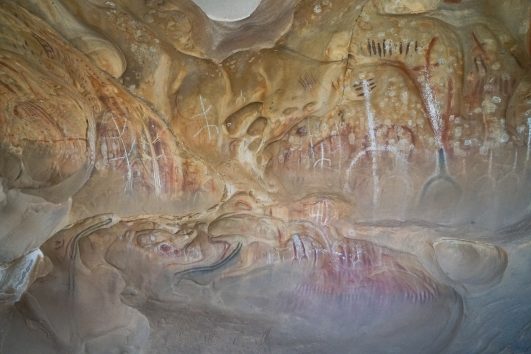 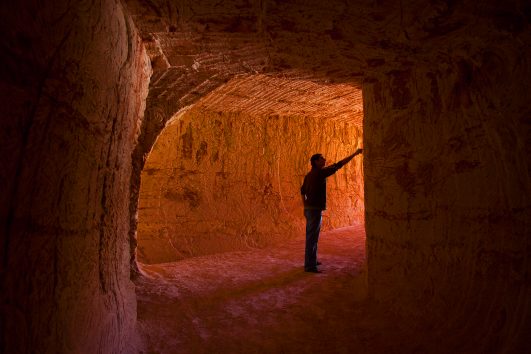 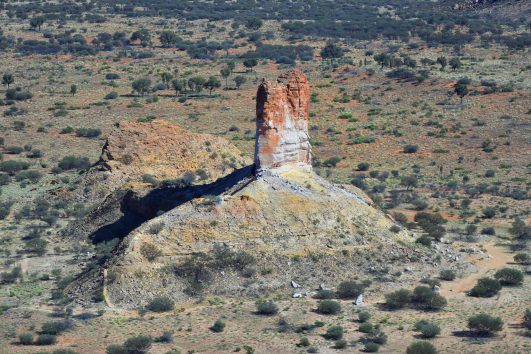 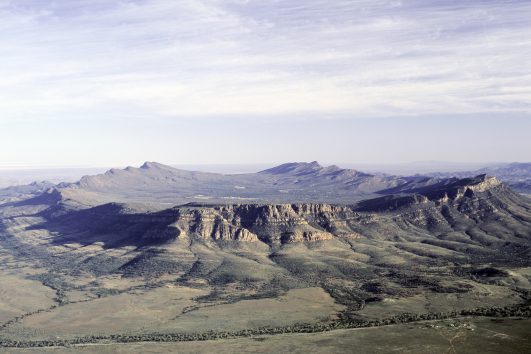 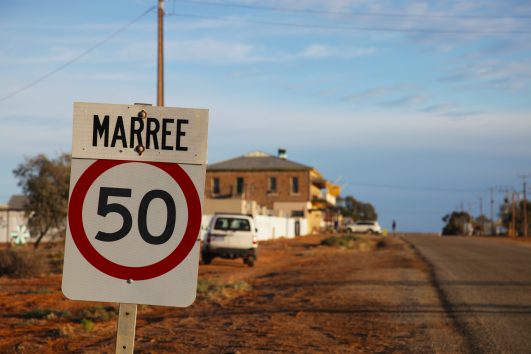 Learn more about the importance of this outback town in the settlement of Australia. Visited as part of our small group package tours for mature and senior travellers, couples or singles this is a town with history! 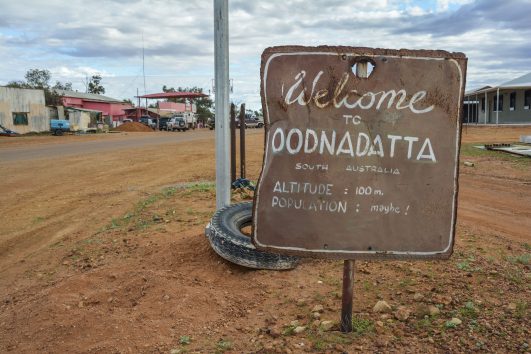 Oodnadatta is an adaptation of an Arrernte word utnadata meaning 'blossom of the malga'.  This town was part of a network of Aboriginal trading routes existing for tens of thousands of years. Learn and discover more on a small group tour of the Flinders ranges.