Questions About Iran: The Definitive Guide for Travellers

Odyssey Traveller specialises in crafting unforgettable experiences for mature-aged travellers, providing adventure and educational programs to small groups since 1983. Odyssey has built up a reasonable knowledge bank to answer questions about Iran that travellers are likely to ask, as they make their plans to tour independently, or with us as part of a small group tour. We hope that this list of frequently asked questions and the answers we provide will help you with planning your next holiday.

Read on, but please do not hesitate to contact us via the website, or through email or chat if you have more questions about Iran or our other tours.

Where is Iran located?

Iran is located in southwestern Asia, sharing borders with Azerbaijan, Armenia, and Turkmenistan (north), Pakistan and Afghanistan (east), and Turkey and Iraq (west). It is bounded by three bodies of water: Caspian Sea in the north, and the Persian Gulf and the Gulf of Oman in the south. A dozen islands in the Persian Gulf also belong to Iranian territory. It is the second largest country by area in the Middle East (after Saudi Arabia). Iran’s capital and largest city is Tehran.

When did Iran change its name from Persia?

Iran changed its official name from Persia in 1935, following a request from the Iranian government under Reza Shah Pahlavi to use the indigenous name instead of the Greek-derived “Persia”.

Iran has been historically known as “Persia” by its allies and enemies for thousands of years, derived from the adjective the Greeks used (“Persis”) in the 5th century BC to refer to the empire of Cyrus the Great. Persis was also derived from the name of the tribe to which Cyrus’s Achaemenid dynasty belonged. The name persisted until the Qajar rulers, whose dynasty was terminated by Reza Shah Pahlavi.

Reza Shah Pahlavi requested governments with which it had diplomatic relations to refer to the country as “Iran”, the word people in the region used to refer to themselves back in ancient times. It is derived from the Sanskrit word “Aryan”, which means “compatriot”.

The name change caused a bit of confusion at first, especially among Westerners who thought it was a new country carved from the Ottoman Empire, or who confused it with Iraq.

When did Iran become a country?

Iran is home to one of the world’s oldest civilisations, the centre of a great empire for centuries. At its height, its imperial territory stretched from the modern-day Balkan Peninsula in Europe, to the Indus River Valley in northwest India, and south to Egypt.

It became an Islamic Republic on April 1, 1979, following the Iranian Revolution that toppled its monarchy and paved the way for the leadership of Ayatollah Khomeini.

You can read more here in our previous article about Iran’s history, centred on the city of Tehran.

Other articles that may be of interest:

Receive a AUD$350 voucher towards your first small group tour
Join
How is Iran ruled?

As a unitary Islamic republic, the Iranian government is dominated by the clergy.

After the revolution, political leadership is no longer inherited but is instead bestowed by an assembly of ulama or Muslim scholars. Decisions regarding who should be Supreme Leader are made based on a candidate’s personal piety, expertise in Islamic law, and political acumen. Ayatollah Ali Khamenei has held the position since Khomeini’s death in 1989.

A constitutional amendment in 1989 abolished the post of prime minister and gave greater authority to the president, which until then is only a ceremonial post. The president is elected by the people. The president answers to the Supreme Leader and must be a native-born Iranian Shīʿite. The judiciary follows Islamic law.

The capital Tehran, however, has been described as Iran’s “most secular and liberal city”. Oliver Wainwright, writing for The Guardian, describes youthful rebellion in Tehran in the form of flirtations in traffic jams and hip-hop music blaring in a skatepark, and likens the city to “Los Angeles with minarets”. (Tehran was indeed designed by an Austrian immigrant to the United States, architect Victor Gruen, who pioneered the design of American shopping malls.)

What is Iran's language?

Farsi (Persian) is the official language of Iran. More than half of Iran’s population are Persian speakers. According to the Iran Chamber Society, Classical Persian, which was also infused with Arabic words, “remained essentially unchanged until the nineteenth century”. This was until a dialect, Teheran (or Tehrani), rose to prominence after the Qajar Dynasty chose Tehran as its capital, moving the centre from Shiraz. The dialect became the basis of Contemporary Standard Persian.

Can you travel to Iran without a visa?

You will need a visa to travel to Iran, which can be applied for online. All visitors to Iran must hold a passport or travel document valid for six (6) months at the time of departure. The documents required for visa application include:

Make sure to check with the Iranian embassy or your local consulate for the latest news and if there are changes in the requirements. You may also be exempt from applying for a visa, depending on your citizenship. Citizens of the Republic of Azerbaijan, Bolivia, Turkey, Syria, Lebanon, Georgia, Armenia, Venezuela, Egypt and Malaysia can visit Iran without a visa.

What currency does Iran use?

The currency of Iran is the Iranian rial, although in everyday usage Iranians still use the “toman”, equivalent to 10 rial, as a unit of currency for transactions. The rial (from the Spanish word meaning “royal”) replaced the toman as the official unit of currency in 1932 under the Pahlavi dynasty in a hope to Westernise the country. In 2016, the Iranian government considered switching back to the toman, which in Turkish means “ten thousand”.

What is Iran's climate?

Iran has a diverse terrain, and the climate, depending on where you are, can vary from subtropical to subpolar. On average, Iran has dry summers and cool winters. In Tehran, January is the coldest month (8 degrees Celsius) and July-August the warmest months (36-37 degrees).

The peak season for travel is from March to May because of the mild weather and the celebration of the No Ruz or Iranian New Year, which usually occurs on March 21.

The shoulder months of September and October have moderate weather, while the winter months (November to February) are usually avoided due to the extreme cold (unless you’d like to go skiing!).

What should you wear in Iran?

Islamic dress codes (modest clothing and head covering for women) are strictly enforced on Iranian citizens, but rules are not as tight for foreigners, who are given some degree of flexibility. However, it is still advisable to observe and respect local customs.

For women, this means wearing a head covering (usually a scarf) and wearing clothes that cover your arms and legs in public places. Tops should extend to cover your behind, especially if wearing tight jeans. Wearing outerwear such as a manteau (a long coat or coat dress, usually made of cotton) is a good option.

For men, there are less restrictions, but shorts and sleeveless shirts should still be avoided.

Important shrines may require women to wear a chador, which is available on-site and can be borrowed. A chador is a large piece of cloth that leaves only the face visible.

What are the places to visit in Iran?

A country with a dramatic and colourful centuries-old history is bound to have incredible places to visit, ranging from natural to architectural wonders. Iran is definitely no exception.

Your port of entry will most likely be the capital, Tehran, which has sights from its imperial past, alongside cosmopolitan comforts. Walk around Azadi Square and take a postcard-perfect photo of the Azadi Tower, the symbol of Tehran. It was inaugurated in 1971 by Mohammad Reza Shah as Shahyad Tower (Shahs’ Memorial Tower) to celebrate the 2500th year of the Persian Empire. After the 1979 Revolution, it was renamed Azadi Tower, or Freedom Tower. The streets near the University of Tehran are also packed with trendy shops and book stores.

The lavish Golestan Palace, home of the Qajars and originally built in the Safavid era, exhibits the wealth and extravagance of the Persian monarchy. It is a World Heritage Site, noted for its incorporation of Persian and Western design.

One edifice that is considered an architectural masterpiece and a treasure of Islamic architecture is the 16th century Shah Mosque (also known as Imam Mosque or the Royal Mosque) located on the Naghsh-i Jahan Square (“Image of the World”, also known as Imam Square) in Isfahan. The Imam Square and the grand mosque are products of the massive urban planning undertaken in 1598, when Shah Abbas I moved the capital of Persia from Qazvin to Isfahan in an effort to avoid assaults by the Ottomans and to control the Persian Gulf.

Both the mosque and the square are listed by UNESCO as World Heritage Sites. The Shah Mosque, famous for its seven-colour mosaic tiles and calligraphic inscriptions, is located on the south side of the square and is angled at 45 degrees to face Mecca.

The 19th century Nasir al-Mulk Mosque in Shiraz, Fars Province is also known as the “Pink Mosque” because of its rose-coloured tiles. Built to catch the morning sun, the Pink Mosque is best appreciated in the morning when sunlight shines through its stained-glass windows, turning its interior into a kaleidoscope.

Mosaic tiles are not exclusive to Iran’s mosques. One of the finest examples of the use of this technique on a Christian structure is the Vank Cathedral (also known as the Holy Saviour Cathedral, or the Church of the Saintly Sisters) in the New Julfa district of Isfahan. The district is named after the city of Julfa in Armenia (today’s Azerbaijan Republic) and “Vank” is an Armenian word meaning “monastery”. The cathedral was established in 1606 and completed in 1664 for the hundreds of thousands of Armenians who were deported during the Ottoman War (1603 to 1618) and were resettled by Shah Abbas I in the district.

In Shiraz, visit the ancient Abarqu Cypress tree, and the UNESCO-listed site of Pasargadae, where Cyrus the Great, founder of the Achaemenid dynasty, is entombed.

You may also visit Persepolis, founded by Darius I in 518 BCE. Persepolis, the capital of the Achaemenid Empire, is located about 60 kilometres northeast of Shiraz. It was built on an immense half-artificial, half-natural terrace. The importance and quality of the monumental ruins make it a unique archaeological site. 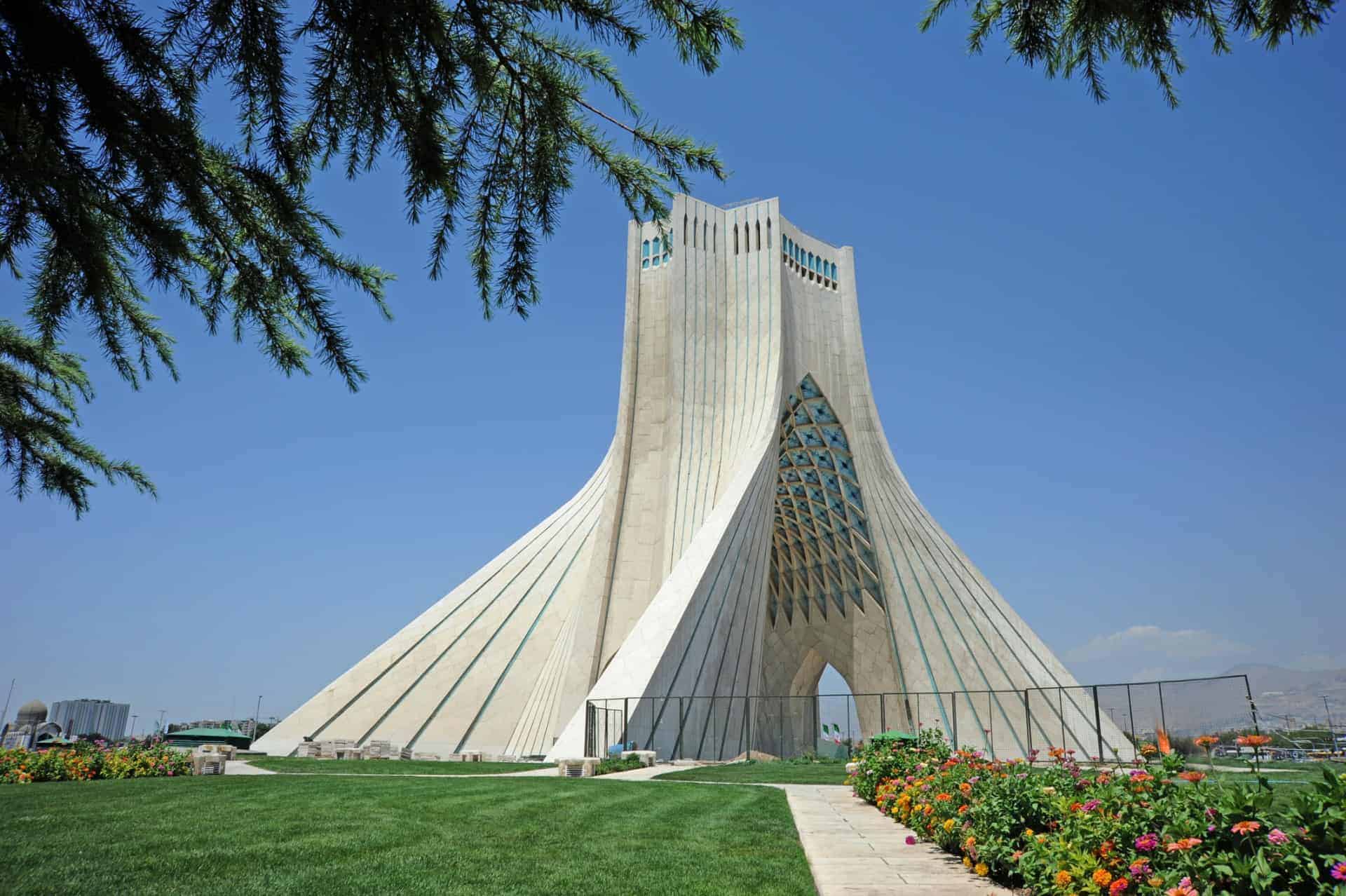 If you’re interested in learning more about Iran, you might want to take a look at some of our other articles: