Exploring Paris and France by rail, tips for learning about history. “On each trip, I felt as if I were escaping from the present into the past, into ages I had loved reading about in school”. Author Ina Caro describes here her discovery of French history by rail, in her bestselling book from which this Odyssey tour takes inspiration. France has a rich and tumultuous history of uprising and revolution. It features events thought to be among the most significant in human history. Much of it centres in Paris, making it the ideal base from which to explore the country’s past. The French take great pride in their history and preserve it with respect and attention. The result is glimpses into different centuries – from 3rd century ruins up to more recent sites of artist’s impressions and architecture. Modern Paris is a cross section of history through the ages. They are stories of history told with beauty and dignity – let this city share with you its centuries’ worth of secrets. 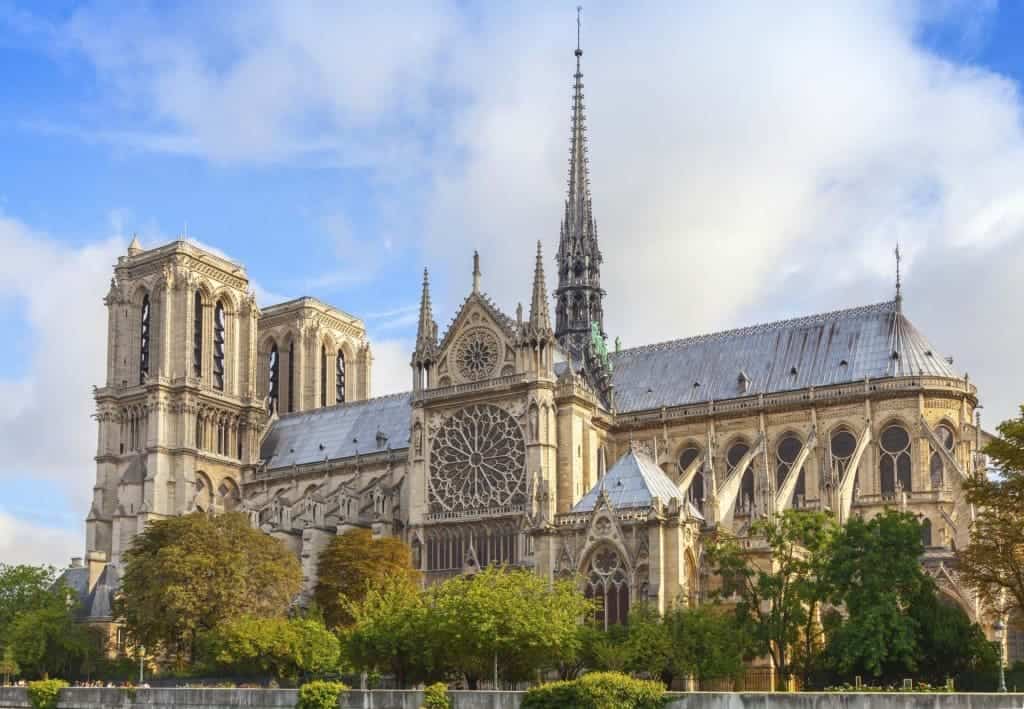 Paris has long been the epicentre of the country’s historical events. On Odyssey Traveller’s French History by Rail European small group short tour, the romantic capital is the base from which we explore the past. With almost three weeks in one of the central arrondissements of Paris, we live like the locals do. There is time in the mornings and evenings to explore the local boulangeries and restaurants. So each day, we come together as a small group to explore Paris and France by rail, journeying to beautiful medieval cities. The world renowned TGV trains are the perfect way to travel in style and at speed, allowing time to discover the country’s historical gems before returning to our Parisian base.

The origins of Paris

The city of Paris started its life as Lutetia, a Celto-Roman settlement on the Ile de la Cite. It takes its present-day name from the Parisii, who were the dominant tribe in the region when the Romans arrived in 52 BC. During their reign, the city underwent great expansion, with the development of forums, palaces, theatres and other cultural sites. Clovis of the Franks replaced the Romans in 508 AC, and is considered to be France’s first king. His realm did not extend far beyond Paris, though, so the real honour goes to Charlemagne, crowned in 800.

Clovis’s descendents, the Carolingians, maintained their hold on the Lutetian state throughout repeated German invasions. One of the most significant Viking raids happened on 28 March 845. The city was attacked and held ransom, released only in exchange for a large bounty paid by the crown. The high level of threat prompted the building of a fortress on the Ile de la Cite in 885, but still the city soon suffered another siege lasting almost a year. Charles the Fat (or Charles III) decided not to retaliate, but instead to permit the besiegers to sail up the Seine to lay waste to Burgundy.

Great political unrest continued for almost a century until the last of the Carolingians was succeeded by the Duke of Paris, Hugh Capet. He established for the city a premier position in the medieval world, and is thought to have marked the birth of modern France. 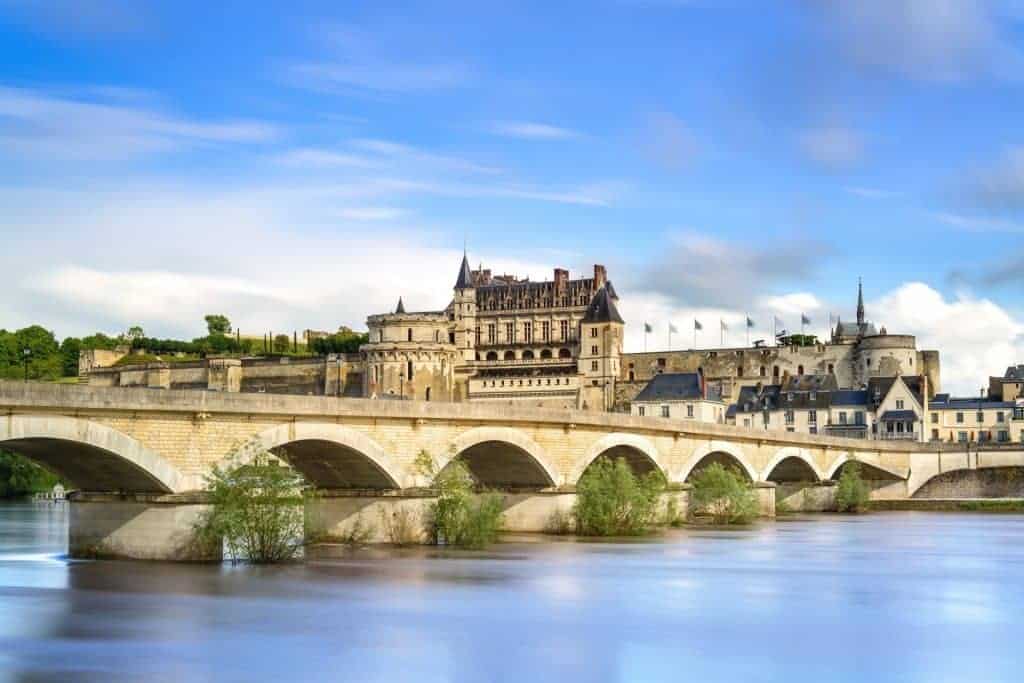 Paris prospered economically and culturally and by the end of the 11th century, attracted scholars, teachers and monks. The Sorbonne was established in 1200. It fast became one of the most significant centres for learning in Europe, if not the world. The guilds were instrumental in inciting the first revolt after the King’s capture by the English in 1356. Disease blighted this period of history. The Black Death arrived in 1348, killing as many as 800 people per day. The plague was responsible for 40,000 deaths in 1466 alone.

The Hundred Year’s War was a series of conflicts between the Kingdoms of England and France. Joan of Arc’s role in the Lancastrian phase of this war inspired her canonisation as a Roman Catholic saint. Her support of uncrowned King Charles VII was instrumental to France’s eventual victory. But on 23 May 1430, she was captured by English-allied Burgundy. She was burned at the stake a year later, aged just 19 years old.

In 1590 Henri IV unsuccessfully carried out the Siege of Paris. Four years later, under threat of usurpation, he converted to Catholicism and was welcomed by the city as King. Henri’s family invested in building infrastructure, including some of the city’s picturesque bridges. But in 1648 came the Fronde – a rebellion by Parisians dissatisfied with their political representation. The royal family fled the city. King Louis XIV later moved the family to Versailles permanently. The following century was an Age of Enlightenment, as Paris’s reputation grew on the writings of intellects like Voltaire and Diderot.

Political unrest at the end of the 18th century

Scholars continue to debate the conditions that led to the French Revolution at the end of the 18th century. The consensus is that many factors contributed, including an improved standard of living that caused the population to expand. France’s participation in the American Revolution was costly. This, along with the outcome of a bad harvest, placed pressure on the nation’s resources. This period saw the rise of the bourgeoisie, an increasingly prosperous and elite class of merchants, manufacturers and professionals who sought greater political power. Meanwhile, the peasant classes, who had grown accustomed to improved living conditions, demanded rights including land ownership.

The French philosophes sought to apply the revolutionary ideas of Rousseau and Voltaire. These political ideas spread quickly among the educated classes, assisted by the development of reading rooms. The ruling classes moved to tax French nobility and clergy, causing further unrest. And by this time, the French monarchy was no longer considered to be divinely ordained.

The various dissatisfied classes began to rally and push for reforms. Inspired by Enlightenment ideals, the Estates-General formed, with members of the Third Estate taking control within the first year of the Revolution. July of 1789 saw the Storming of the Bastille. The Bastille was a political prison and, though by this time it housed just seven prisoners, was thought to symbolise abuses by the monarchy. By August of 1789, the seigniorial rights of the nobility and Catholic clergy were ended by the Abolition of Feudalism.

The years that followed were beset by political struggle between the liberal assemblies and the supporters of the monarchy. The Republic was proclaimed in September 1792, and Louis XVI and Marie Antoinette executed in 1793. Many political executions continued into the following year during the Reign of Terror. Napoleon Bonaparte finally overthrew the French Directory. He put an end to the Revolution and established the French Consulate. He was later elected emperor of the First French Empire. 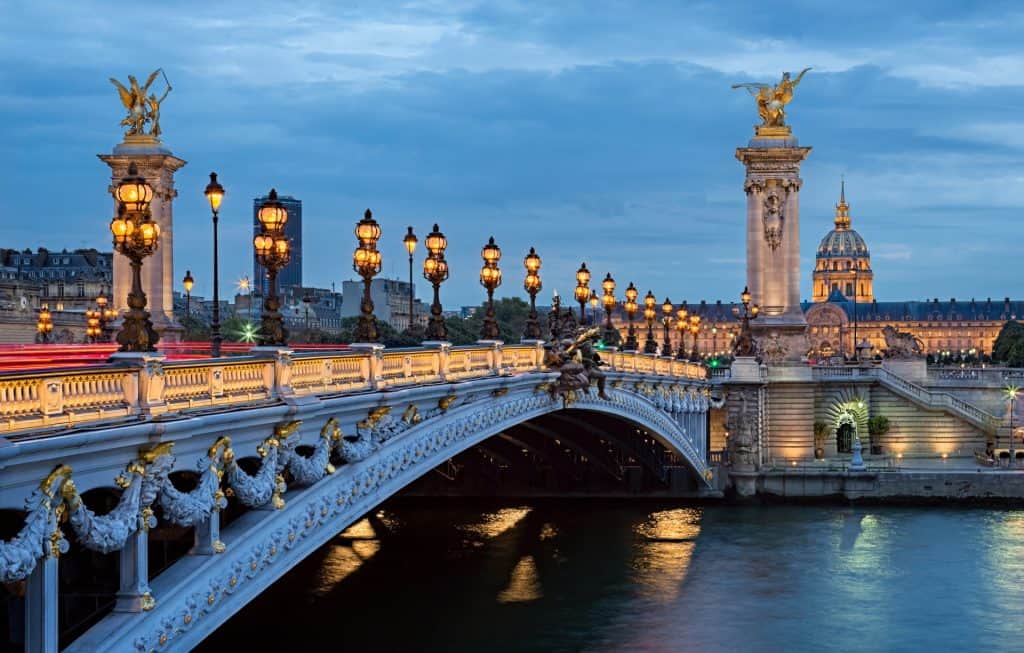 Napoleon was defeated in 1814. Paris was invaded by Prussian and Allied armies and the city was conquered by foreign power for the first time in 400 years. The Restoration period ensued, with the return of the monarchy under Louis XVII and Charles X. This continued until the July Revolution Parisian uprising in 1830, when power went to Louis-Philippe’s constitutional monarchy. Finally the February Revolution in 1848 led to the creation of the Second Republic. Cholera epidemics ravaged the French population. Then came the Industrial Revolution with its proliferation of railways and an unprecedented influx of migrants. The city underwent transformations of infrastructure under Napoleon III’s 1852 Second Empire.

In Paris, whole districts were levelled to make way for widened avenues and neoclassical facades. These developments beautified the capital but also facilitated military effectiveness, an important consideration given France’s violent history.

The Second Empire ended in the Franco-Prussian War (1870-71). Paris surrendered on the 28 January 1871. The Paris Commune government emerged out of this, to resist the Prussians and oppose the Versailles government. But this event ended in “Bloody Week” in May 1871. The ease with which the Versailles army overtook Paris owed much to the city’s recent renovations, ironically designed to protect it from such incursions.

But amid these stories of war, new wonders arrived with La Belle Epoque of the late 19th century – the Parisian “golden age”. The Eiffel tower, the first metro lines, many parks and a network of streetlights all come from this period; the latter said to have given the city its romantic “glow”. 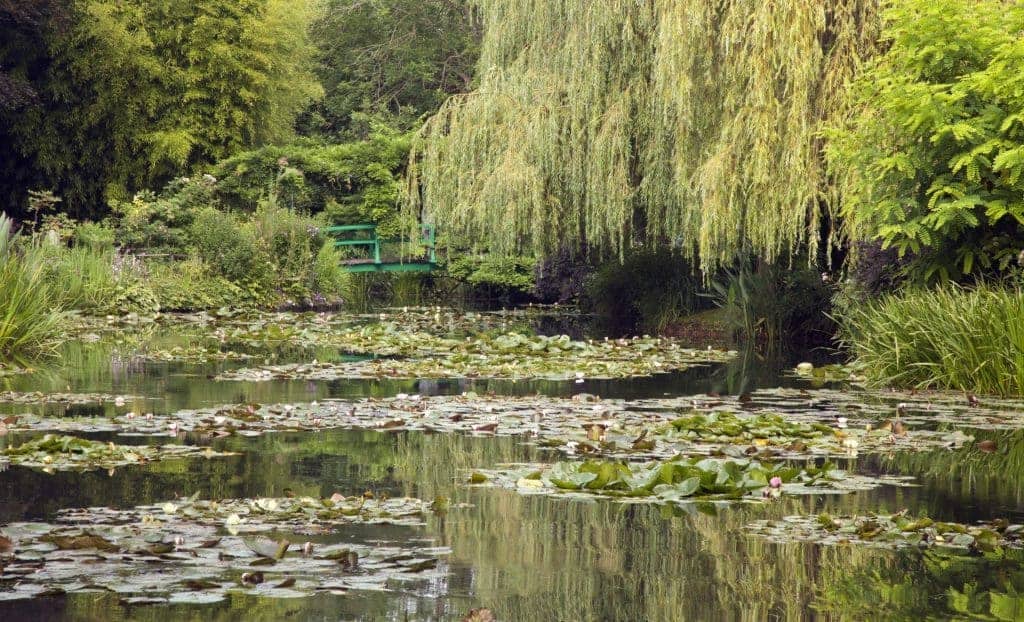 The 20th century to now

The German General thankfully ignored Hitler’s order to burn the city of Paris. Rumour has it he was advised by a Swedish diplomat that it would be better to surrender and be remembered as the saviour of the city, rather than be responsible for its destruction. France recovered from the war quickly at first, then slowed as it grappled with the same problems faced by nations everywhere, including pollution and housing shortages. This time saw immense growth in multiculturalism as the country welcomed new immigrants from across the world, including Africa, Vietnam and Laos. Modern France owes much to this diversity, influenced by the music, art and cuisine of these new communities.

The railway network of France

The Parisian railway system was first established during the 19th century La Belle Epoque. Now, it is made up of the sprawling metro, along with services that span the country and continent. This includes the famed TGV – a network of high speed trains that service 1400 destinations across France. France’s Train a Grande Vitesse, or TGV as it is better known, has been connecting people since 1981. It’s the flagship of France’s railways service, travelling at speeds of up to 320 km/h. It assists travellers to reach destinations across Europe. Stylish and modern, the interior of the latest TGV was designed by French fashion designer Christian Lacroix. So once aboard, all passengers may avail themselves of the restaurant car, serving hot and cold snacks and refreshments. Further information on the TGV network can be found here. 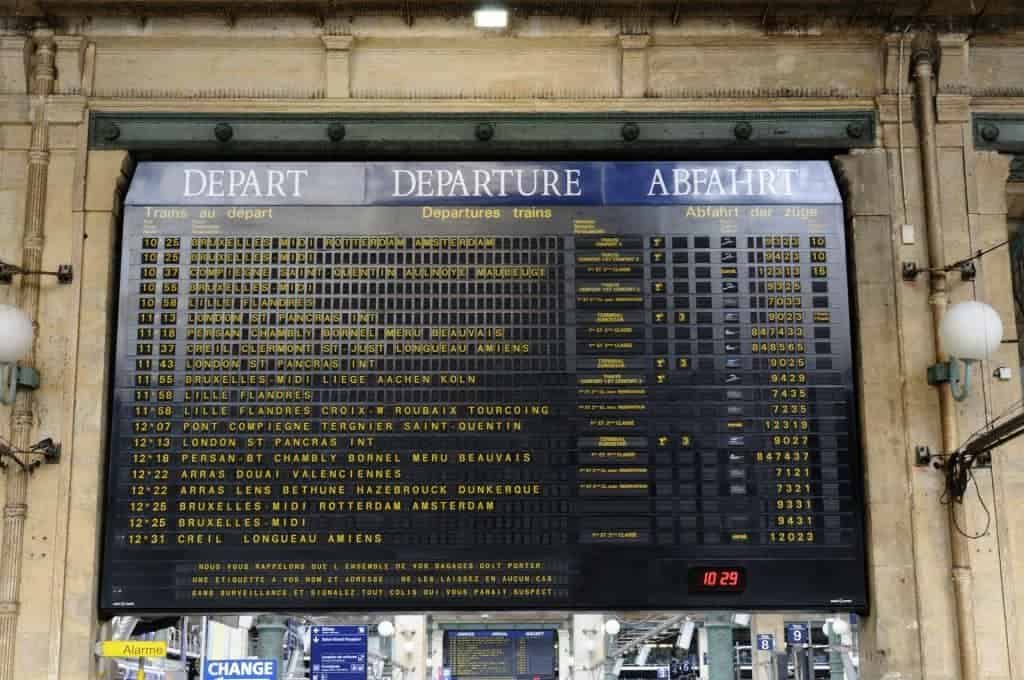 What to pack: tips for mature travellers

Therefore of the tour’s twenty-one days, two nights will be spent away from our Paris base. Travellers are encouraged to pack light for the journeys to Avignon and Tours. If possible, include a smaller overnight bag in your luggage especially for these nights. The overnight bag should contain the obvious items: a change of clothes, good walking shoes for guided walking tours, medications, and toiletries. Packing as lightly as possible is advised so that we can move about with ease, boarding and alighting the train with minimal fuss. The remainder of your luggage will be kept safe back in Paris. For more information on packing for small group tours for mature travellers, click here. 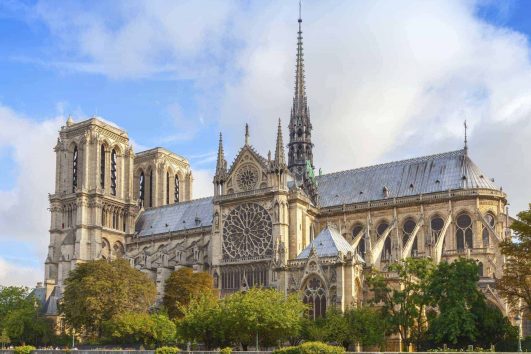 Participants live for almost 3 weeks in one of the central arrondissements of Paris, using charming Paris apartments as a base, living as the locals do, and enjoying the charms of Parisian life.

French History by Rail program is based on Ina Caro’s book of the same name. Participants live in central Paris, using apartments as a base, living as the locals do, whilst meeting each day as a small group to journey by rail and TGV to the beautiful medieval centres of France.

La Belle France explores beneath the surface of many French institutions and household names. Our program visits Chateauneuf du Pape to sample its wines and Cognac Hennessy. We cruise the Burgundy Canal and visit Dijon to assure ourselves that the mustard is actually made there. Our program concludes with an in-depth tour of the Normandy Landing Beaches. Here we inspect the old emplacements, the museums and the memorials to the Allied soldiers whose bravery and sacrifice made this tour possible.