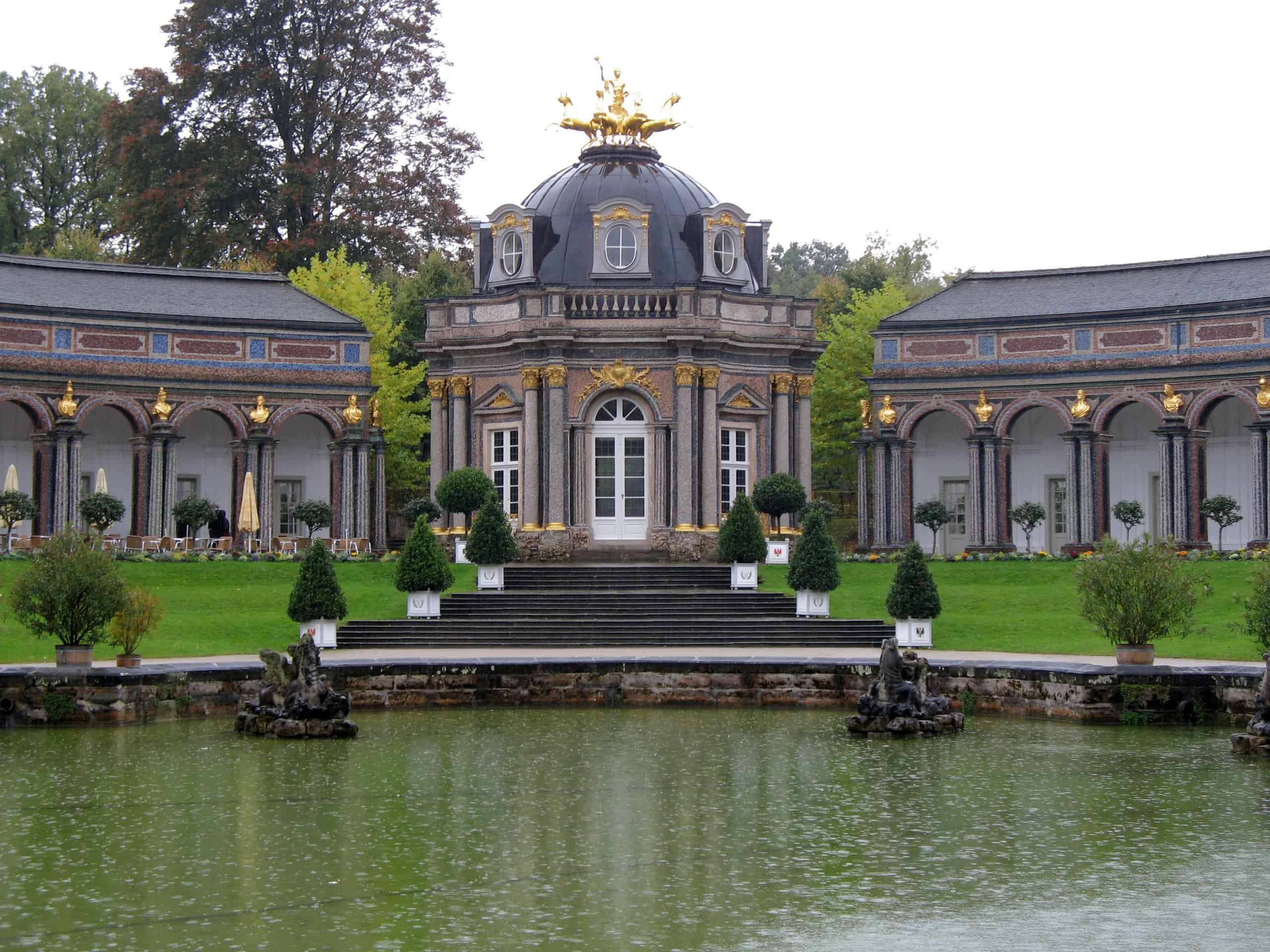 Bayreuth is located on the Red Main river in Northern Bavaria. The pretty, mid-sized town is world famous for the Bayreuth Festival, and for its affiliation with the German composer Richard Wagner. The composer lived here from 1872 until his death in 1883. He constructed a villa here, called “Wahnfried” (a compound of the German words for “madness” and “freedom”), thanks to his sponsorship from King Ludwig II of Bavaria. Following World War II, this residence was converted into a Wagner Museum.

The Bayreuth Festspielhaus (Festival Theatre) is located in the northern part of Bayreuth. It was constructed especially for the performance of Wagner’s operas – the inaugural Bayreuth Festival devoted to the premier of his Ring Cycle. Wagner’s Ring Cycle or Der Ring des Nibelungen (“The Ring of the Nibelung”) is a cycle of four German-language epic music dramas based loosely on characters from the Norse sagas and the epic poem Nibelungenlied.

The Festspielhaus, with its great acoustics and design, is the site of the annual Bayreuth Festival, which celebrates the life and work of Richard Wagner. It takes place every summer, and tickets have sold out persistently since its very first year. Thousands flock to Bayreuth to participate in the celebration of Wagner’s work and legacy.

In 1871, Wagner and his family moved to Bayreuth. This was after a turbulent period during which Wagner fell in love with Cosima, illegitimate daughter of Frank Liszt who was then married to Wagner’s conductor. The affair scandalised Munich, and Wagner was forced to leave on self-exile. Wagner and Cosima later married, in 1870, a marriage that would last until his death.

Though drawn to Bayreuth for its opera house–the beautiful Margravial Opera House, now a UNESCO World Heritage Site–Wagner soon decided a brand new one would need to be built to accommodate his grand plans and the unique operatic experience he had in mind.

He announced the Bayreuth Festival, at which the Ring Cycle would be performed in full for the first time. Finance was declined by Ludwig, so “Wagner societies” were established in several cities to contribute to the cause. The composer began touring to drum up funds. And after many more appeals to Ludwig, the king finally relented and provided a loan.

The theatre was completed in 1873, and the four operas— Das Rheingold (“The Rhine Gold”), Die Walküre (“The Valkyrie”), Siegfried, and Götterdämmerung (“The Twilight of the Gods”)—were performed in sequence for the first time in August 1876. You can read short summaries of each opera on our Wagner Ring Cycle tour page here.

Wagner revolutionised opera with his concept of the Gesamtkuntswerk, which translates to “total work of art”, synthesising poetry, music, visuals, and drama. He is also known for the use of leitmotifs (from the German, Leitmotive, literally “leading motives”) or distinct musical phrases that were associated with particular characters, places or elements of plot. The Bayreuth Festspielhaus (Festival Theatre) showcased his concepts and several technical innovations (some said to have been appropriated from his friend, architect Gottfried Semper). These include the darkening of the auditorium during the performance, and placing the orchestra in a pit out of view of the audience.

As the inaugural festival and cycle drew to a close, the reception ranged from rhapsodic – Edvard Grieg called it “divinely composed” – to the negative, with French newspaper Le Figaro calling it “the dream of a lunatic”.

A walking tour of Bayreuth can take you to its fine Baroque buildings that give an insight into its history, such as the Hermitage (Old Palace), the old palace of Georg Wilhelm, Margrave of Brandenburg-Bayreuth (1678-1726). Another attraction is the Kunstmuseum Bayreuth, a museum of modern and contemporary art which opened in 1999.