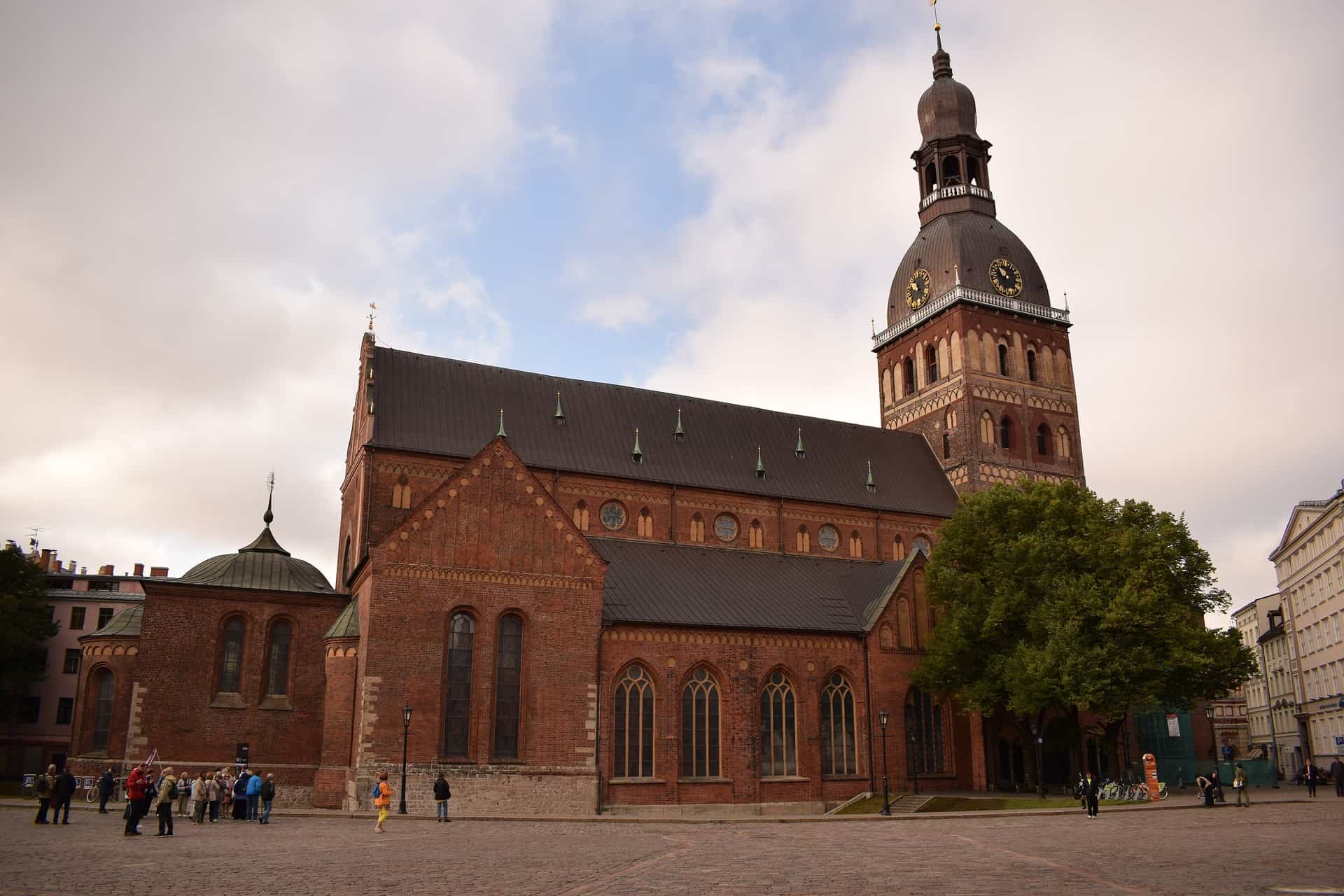 One of the most recognisable features in the Latvian capital, Riga Cathedral is the seat of the Archbishop of the Latvian Evangelical Lutheran Church and the largest medieval church in the Baltic states. Found in 1211, the cathedral has been updated and renovated over the centuries meaning the architecture is an amalgamation of different styles from the 13th to 18th centuries. The majority of the church is in the Gothic style, built in the 15th century but the oldest portion has Romanesque features and the tower is 18th-century Baroque. While the cathedral is still used for church services, the complex includes the Museum of the History of Riga and Navigation. This museum features more than 500,000 archival items and tells the story of 800 years of Riga’s history.

The History of the Riga Cathedral

The foundation stone of Riga Cathedral was laid in 1211 near the River Daugava. The church was consecrated by Livonian bishop, Albert of Riga, who hailed from Lower Saxony in Germany. A monastery of the Cathedral Chapter of the Riga Diocese and the Riga Cathedral School were built soon afterwards next to the cathedral.

In the 14th and 15th centuries, the cathedral was transformed into a basilica after the Gothic spire of the cathedral burned down in a fire in 1547. The central nave was raised, the tower was raised to a height of 140 metres and two new galleries wree built in 1595. On top of the cathedral tower, instead of a cross you will find the tower decorated with a rooster that dates back to this time. The rooster has become a symbol of Riga and according to Christian tradition, the rooster is a vigilant defender against evil and can drive away all bad things with his morning song. The rooster atop the cathedral weighs around 86 kilograms, is about 0.5 metres tall and about 1.3 metres wide. It serves as a weathercock and whichever way its beak is pointing is the direction of the wind.

The cathedral is also renowned for its 6768-pipe organ which was built by E.F. Walcker & Sons in 1884 and today, is considered to be one of the most valuable historic pipe organs in the world. During Soviet times (1939-1989), religious services were prohibited and the cathedral was used as a concert hall. Beginning in 1955, it was also used as a museum but resumed its religious role in 1991 after the end of Soviet occupation. In 2011, further renovations took place with the copper roofing above the nave being replaced and the tower exterior replated.

The cathedral is open on daily basis from 9 am to 5 pm and also offers daily organ concerts at 12 during summer. Entry to the cathedral also includes access to the Romanesque cloister. The Museum of the History of Riga and Navigation is inside part of the cathedral and the exhibitions tracks the story of Riga from an ancient port city, to the period of the Hansa League in the 13th-16th centuries, the city under Polish and Swedish in the 17th century and an exhibition on the life of citizens of Riga during the period of Latvian independence from 1918-1940. The collection features maps, silver, navigational instruments, clothing and other decorative items stretching back to the 11th and 12th centuries.

The beautiful Riga Cathedral is an unmissable feature of Riga’s old town which is a designated UNESCO World Heritage Site and visiting the entire cathedral complex offers an unprecedented insight into the old city and Latvia’s national history. Enjoy an organ concert and some choral music while reading about the amazing cathedral building and the people who have been a part of its story.

If you’re interested in visiting Riga and seeing sites like magnificent and majestic cathedral, please take a look at Odyssey’s tour of the Baltics. This tour spends two nights in Riga and also visits Poland, Lithuania, Estonia and Russia.