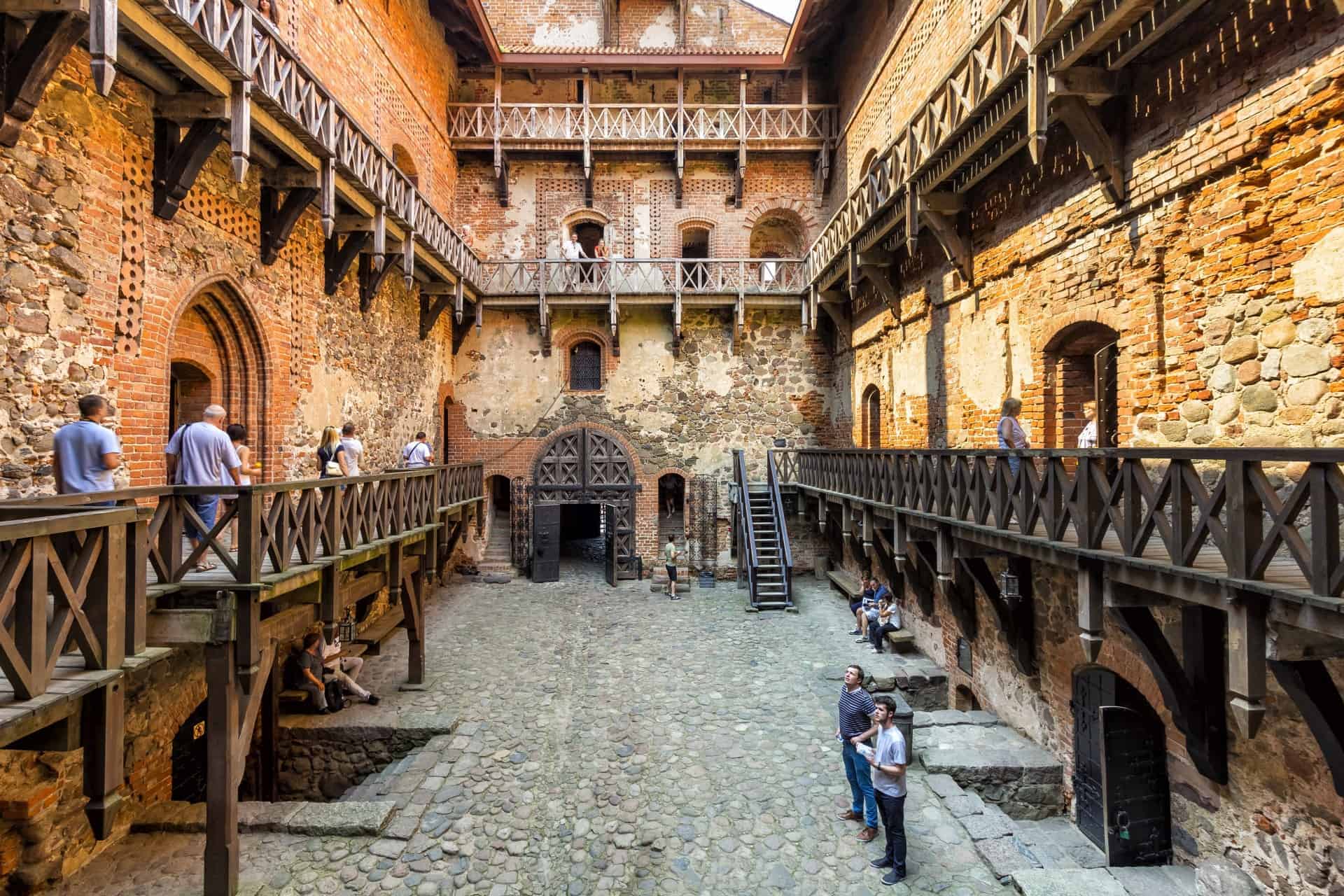 Trakai Island Castle is like something from a fairy tale – there is nothing quite like admiring the view of the coral-coloured brick towers surrounded by moss-green trees as you cross the wooden bridge, with the castle’s reflection glimmering in the surrounding waters of Lake Galve. The Gothic style castle is more than 600 years old and houses the impressive Trakai History Museum, which showcases a range of interesting exhibits including medieval weapons, chainmail, 19th-century embroidery and glassware and religious art. Trakai was one of the main centres of the Grand Duchy of Lithuania and with just one glimpse of the castle you can feel the majesty and splendour of this place. Less than an hour from Vilnius, the capital of Lithuania, this beautiful attraction is a favourite day trip from the city among travellers.

The History of Trakai Island Castle

Trakai Island Castle was built in different stages. Construction of the castle is thought to have begun in the mid-14th century, commissioned by Kęstutis, the Grand Duke of Lithuania (r. 1342-1382). The building of the island castle was related to strengthening the position of the Trakai Peninsula Castle, built between 1350-1377. Today, the peninsula castle lies in ruins but parts of it can still be seen.

Kęstutis eventually moved his residence and treasury to the island castle but it was badly damaged during an attack by the Teutonic Knights in 1377. Kęstutis was assassinated in 1382 and a power struggle ensued between Kestutis’ nephew Jogaila and Kestutis’ son Vytautas the Great. The castle was beseiged by both sides and construction came to a halt. Once a reconciliation was reached between the two cousins, the second phase of construction began and continued until 1409. Vytautas served as Grand Duke from 1401 to 1430. During this period, two wings were added to the castle and 35 metre high fortified tower was built. As well as serving as a defensive structure, the six-storey tower also had living quarters and a chapel. It was linked to the Ducal Palace, which had an inner yard. Stone blocks were used in the foundations and upper parts of the buildings but the rest of the construction was done using red Gothic bricks. The architectural style of the castle during this time would be described Gothic with Romanesque features. 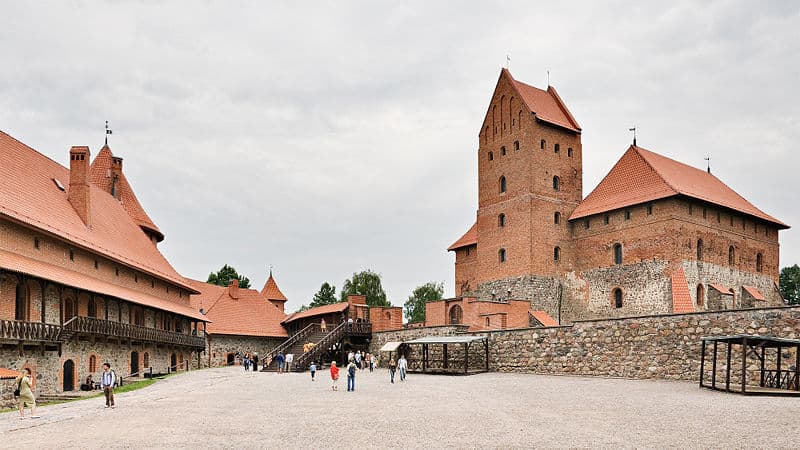 Later in the 15th-century, the castle was expanded again. The walls of the castle were increased to a thickness of 2.5 metres and three major defensive towers were built on the corners of the complex’s walls. A main gatehouse was constructed as were several buildings including kitchens and stables.

In the Battle of Grunwald in 1410, the Teutonic Order were defeated by the Lithuanian-Polish army and the castle lost its importance as a military castle, instead becoming the permanent residence of the Grand Duchy of Lithuania. The interior was renovated and new frescos were painted on its walls, some of which have been preserved. Grand Duke Vytautas died in the castle in 1430 before he could be crowned King of Lithuania.

In the 16th century, Sigismund Augustus, King of Poland and Grand Duke of Lithuania, had the castle redecorated in a Renaissance style and it became his summer residence for a period. Later the castle served as a prison before being damaged during the wars with Muscovy in the 17th century. The castle was not reconstructed during this period and soon fell into disrepair.

By the 19th century, plans were being made to restore the castle. In 1905, the Imperial Russian authorities decided to partially reconstruct the ruins and during World War I, German specialists made several attempts to restore the island castle. The southeastern castle tower was rebuilt by Lithuanian and Polish preservationists between 1935 and 1941 but restoration attempts stopped during the height of World War II. Active work on the restoration of Trakai Island Castle started up again in 1953 and was completed in 1961, when the museum opened. It was reconstructed to look like its 15th-century appearance.

Spread along a 2km-long peninsula only half an hour from Vilnius, the provincial town of Trakai is surrounded by lakes, including Lake Luka, Lake Galve and Lake Akmena. Trakai Island Castle sits on one of 22 islands in Lake Galve. As well as visiting the castle, there are plenty of water activities to enjoy on the lake and it is popular to rent a boat or yacht for a day on the water. There are also plenty of restaurants along the waterfront. In winter, the lake often freezes over and can be popular for ice skating.

The island castle is open daily and accessible via a pedestrian bridge from the mainland. If you are interested in seeing this castle in the flesh, you may want to look at our tour of the Baltics. The tour spends two nights in Vilnius and includes a trip to Trakai to see the castle.