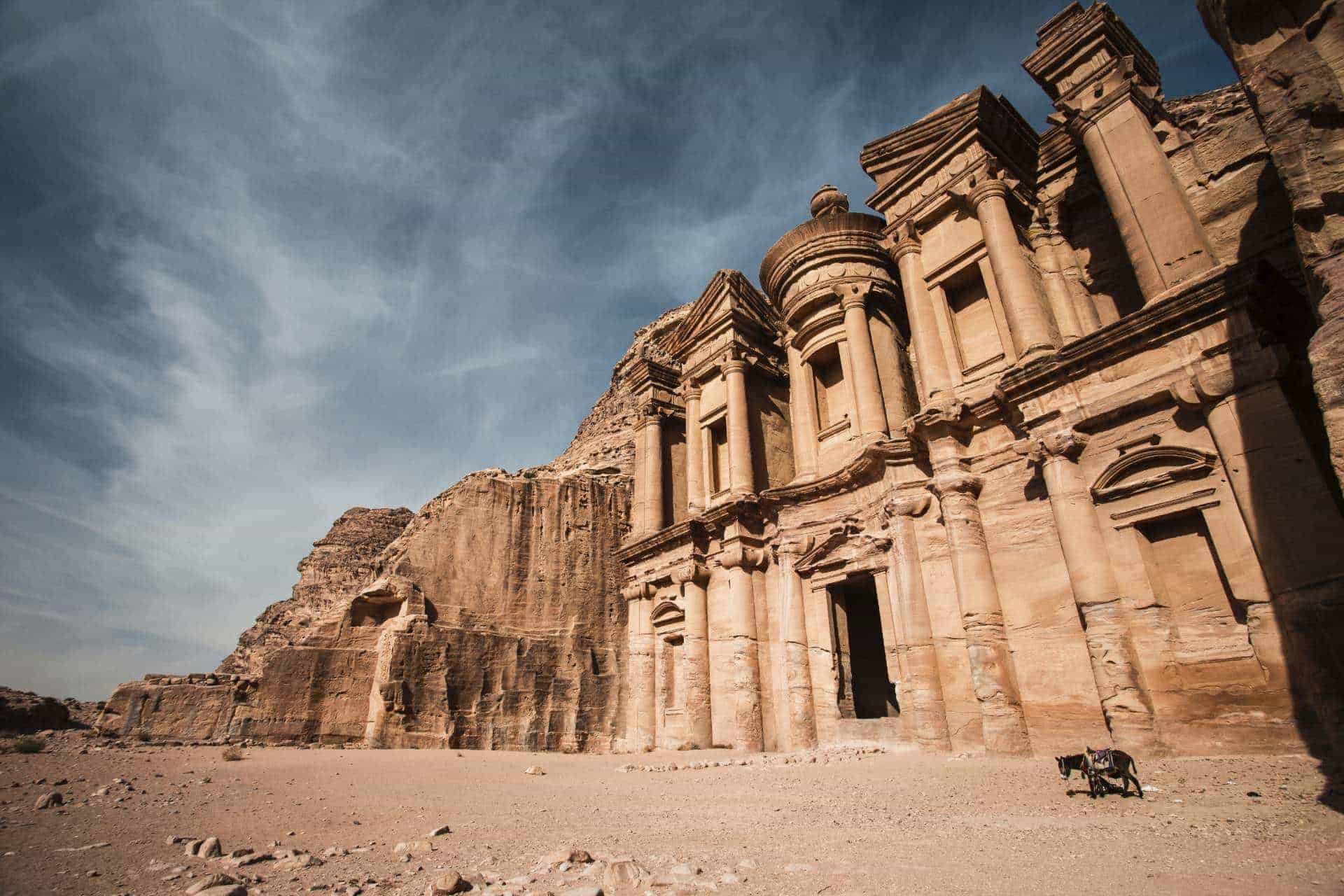 Explore Petra Jordan in the heart of the middle east.

Petra (“Rock”), situated between the Red Sea and the Dead Sea, was once the capital of an ancient kingdom of the Nabataean, that flourished during Greek and Roman times, its impressive ruins and archaeological wonders located in what is now southwest Jordan. In 1985, it was declared a UNESCO World Heritage Site . The biblical scholar John William Burgon described it as a ” rose-red city half as old as Time ” due to the pink hue of its sandstone cliffs and its historical significance. Some 2,000 years ago Petra Jordan, the ” Rose City “, was carved from sandstone, at the head of which is Wadi Musa, or the Valley of Moses. The Wadi Musa is according to tradition was where Moses struck a rock with his staff and water gushed forth into the desert. To this day, the Bedu or Bedouin tribes , the settled and nomadic communities living near Petra and Wadi Rum, continue to use the Nabataean water-collecting cisterns and caves near this city in the Jordanian desert. Wadi Musa is now a modern town that welcomes tourists from Amman and Aqaba in Jordan and other countries visiting the ancient city and archaeological site. 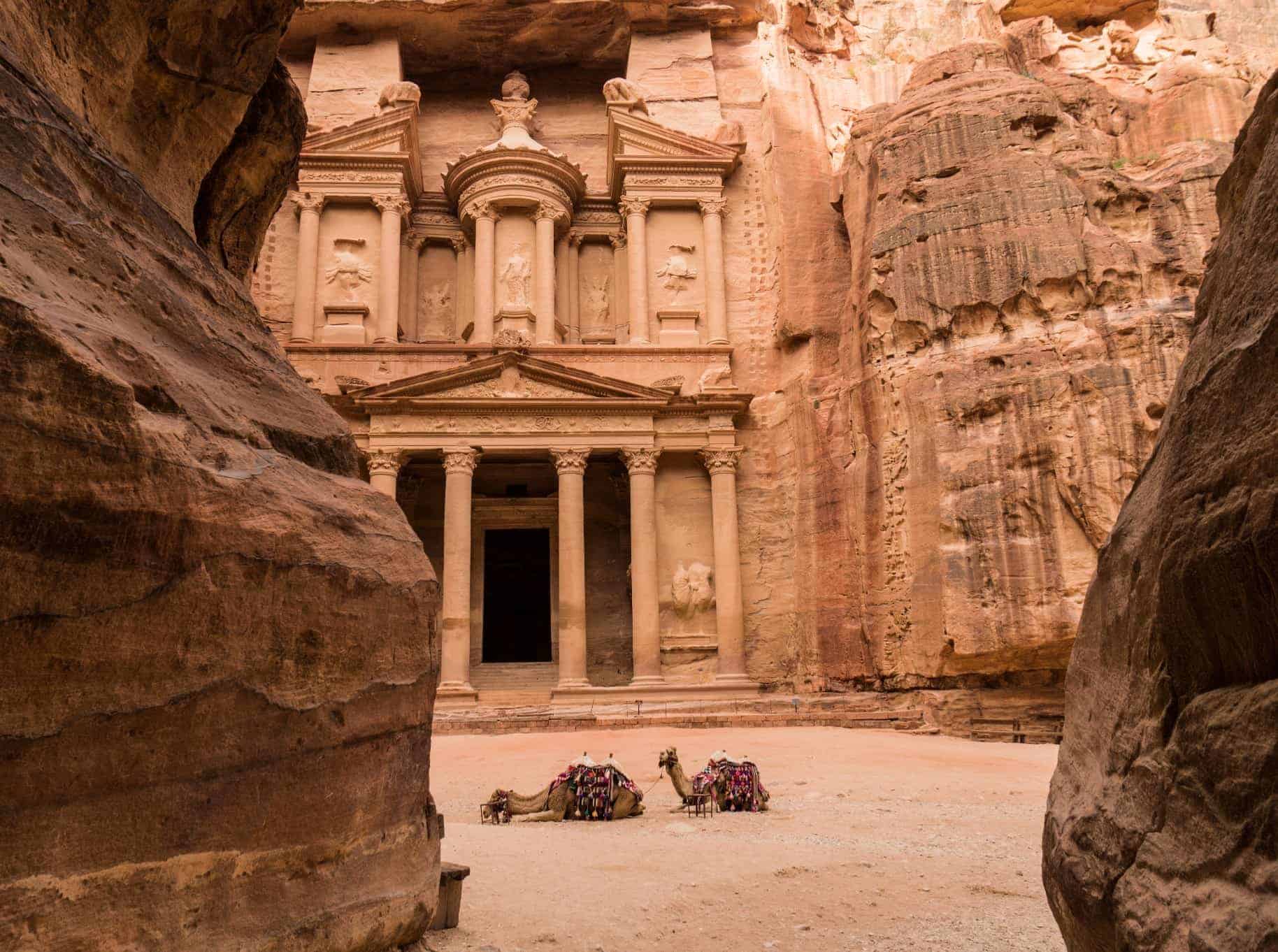 The Nabataean were Arabian nomads from the Negev Desert (in what is now southern Israel) who amassed wealth from the incense trade, and built a kingdom that wielded political power from 168 BC until its annexation by the Roman Empire in 106 AD. They half-carved into the sandstone cliffs of Petra mountain, half-built their capital city of Petra complete with the colonnaded street in a location that was not easily accessible and with no natural source of water. But the location of Ancient Petra, served as an excellent position for the Nabatean Kingdom to monitor the Incense Routes and to be protected by the harsh desert. The Incense Route was a network of trade routes across the Negev Desert that conveyed merchants trading frankincense and myrrh from south Arabia to the port of Gaza in the Mediterranean from the 3rd century BC until the 2nd century AD. Several Nabataean towns-Haluza, Mamshit, Avdat, and Shivta-dotted the desert along this route, serving as rest stops and trading hubs for merchants within the boundaries of the Nabataean kingdom.

The Nabataean‘ success on these trade routes was rooted in their ingenuity in relation to water. They dug cisterns which filled with rainwater and sustained them on the trade routes, and in Ancient Petra they built a sophisticated system of water transportation and conservation, taking advantage of the flash floods that occur in the area.

The kingdom declined after Roman annexation, coupled with the rise of the Syrian city of Palmyra that attracted the merchant caravans. The city of Ancient Petra was damaged in an earthquake in 551, and the population fleeing from the disaster was replaced by an Islamic invasion in the 7th century, and Crusader fortresses, later abandoned, in the 12th century. Petra remained unknown, a lost city, to the Western world until Swiss traveller Johann Ludwig Burckhardt described it in writing in 1812.

Archaeological excavations of the massive facade revealed the funerary halls and the tomb facades of the city. As the ruins continue to be excavated, we continue to learn more about its towering buildings, inscriptions, and mosaics in this elaborate ancient capital in the Jordanian desert, in Southern Jordan. As National Geographic points out, Petra is four times the size of Manhattan -and it is simply impossible to explore every inch of it in a day tour to Petra Jordan.

The main entrance into Petra is the Bab Al-Siq , Arabian for “door to the Siq“, where you’ll find three massive monuments carved into the rock. Next to this is the Obelisk Tomb, and below the tomb is the Bab Al-Siq Triclinium, a banqueting hall with three chambers where in the temple, the Nabataean would make a sacrifice to their dead through a feast.

The Siq is the main road into the city, which starts at the Dam and ends at the Treasury (Al Khazneh), two magnificent Nabataean monuments. The Treasury , standing 40 metres high and topped with a funerary urn, is called as such, but it is still unclear what its original function was. It could have been a place of worship, a treasure trove, or an archive. Greek influence is evident in the Treasury’s facade, with its Corinthian capitals and friezes.