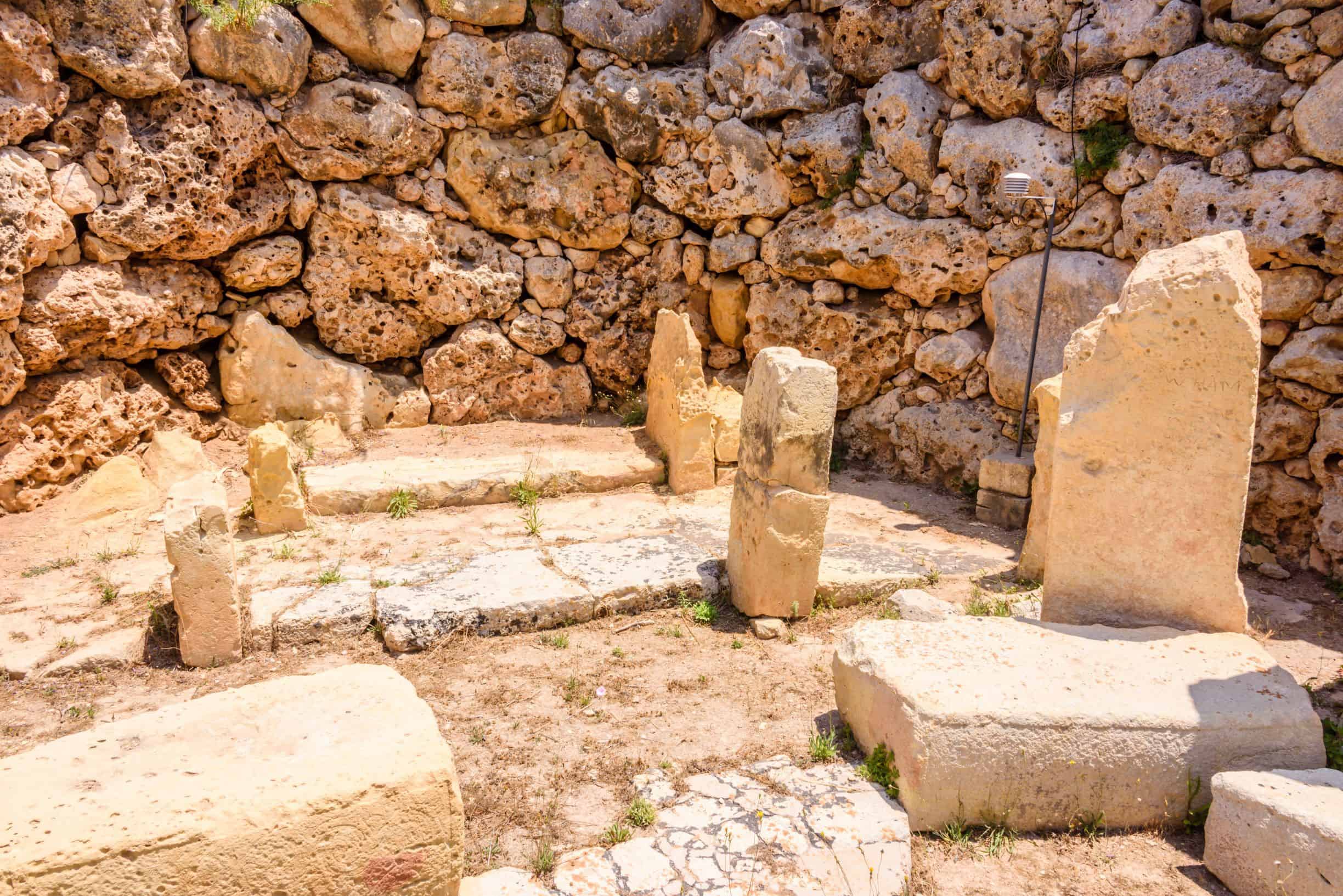 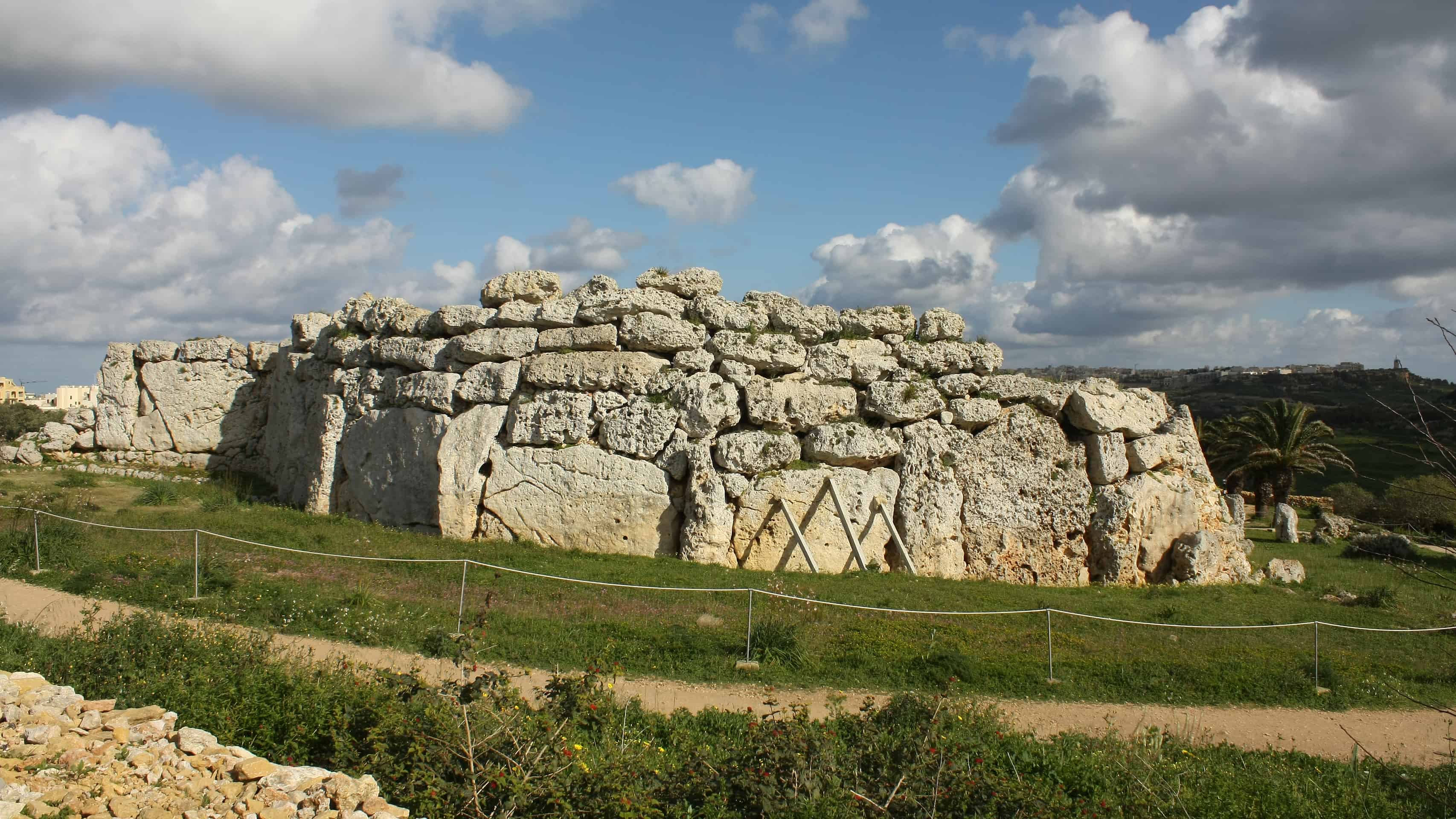 The megalithic temples of Ġgantija, on the Maltese island of Gozo are the world’s second-oldest standing structures (after Gobekli Tepe in Turkey), predating Stonehenge and the Great Pyramids of Egypt. The site consists of two temples and an incomplete third, built on the Xaghra plateau.

The Maltese word Ġgantija means ‘giantess’, reflecting local lore that the temples were built by a giantess who ate nothing but broad beans and honey. Having born a child by a common man, she built the temples with the child hanging from her shoulders, so that they could be used as places of worship.

The temples were built between 3600 and 3200 BCE. The outside walls of the site and the temples was built in hard Corralline Limestone, while the interior details such as doorways, altars, and decorative slabs were built in softer Globigerina Limestone. Each temple consists of a number of apses flanking a central corridor, forming a typical clover-leaf shape.

There is evidence that the internal walls were plastered and painted over, as proven by two plaster fragments painted in red ochre.

The buildings are particularly remarkable when you consider that they were built when the wheel had not yet been invented and no metal tools were available on the Maltese islands. Archaeologists have suggested that small spherical stones found on site were used as ball bearings for vehicles that transported the enormous stone blocks used to build the temples.

Statues found on site indicate that the temples were a ceremonial site in a fertility rite. The layout of the temple is believed to resemble a fat woman. Like at other megalithic and neolithic sites around Malta, archaeologists unearthed ‘fat lady’ sculptures, now on display at the National Museum of Archaeology in Valletta.

Remains of animal bone suggest that the site was used for animal sacrifice. Fire was certainly used in rituals, indicated by the presence of stone hearths. It is likely that during ceremonial activities, the crowd would have stood outside the ceremonial complex, on a large forecourt in front of the temples.

Travellers and researchers knew about the existence of the temple for a long time before it was excavated. In 1827 Col. John Otto Bayer, the Lieutenant Governor of Gozo, had the site cleared of debris and excavations were made. However, afterwards the ruins fell into decay and the land was held privately until 1933. The Museums Department conducted extensive archaeological work from the 1930s to the 1950s in order to preserve and research the ruins and their surroundings.

The temples were listed as a UNESCO World Heritage Site in 1980. In 1992 the heritage list expanded to include five other megalithic temples on Gozo and on the island of Malta. Today, the temples are open to visit along with the newly opened Interpretation Centre, which explores life in the Neolithic Age.

Visitors with an interest in prehistoric sites should also visit the other ancient monuments and temples of Malta, including Ħaġar Qim and the Hypogeum of Ħal Saflieni, an underground necropolis easily accessible on a day trip from Valletta.